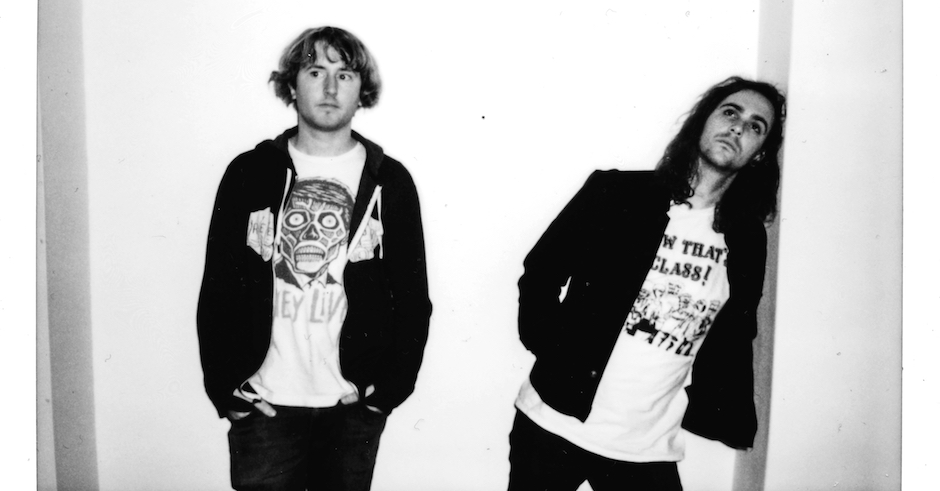 In case you missed it, Queensland dance-punk duo DZ Deathrays are celebrating ten years as a pairing this September with a national tour that can only be described as mammoth. Over a quick week of shows, the Australian favourites will play Fremantle, Adelaide, Melbourne, Sydney and Brisbane with a mountainous pile of special guests, from Canadian punk heroes PUP (nation-wide) to Ali Barter, Yacht Club DJs, Press Club, The Gooch Palms, Polish Club (DJ Set), The Love Junkies and more, depending on which show you're going to (full deets below).

Over the last ten years, the ARIA Award-winning pairing have become one of Australia's most dynamic bands, with their 2014 album Black Rat and its follow-up, the incredible, recently-released Bloody Lovely, bringing an energy unmatched in Australian rock. Their live shows are just as lively too - something you would know if you've caught them at one of their many, many sold-out shows or slots at Falls Festival and Splendour In The Grass this year, the latter of which proving particularly monumental for reasons the duo are gonna dive into shortly. To celebrate the tour, which you can grab your tix and more deets at HERE, the DZ boys have put together a bit of a scrapbook of the last ten years, piecing together their favourite moments of the decade-long journey to what they are now. Check it out below, and peep the dates for the anniversary tour at the end of this feature. 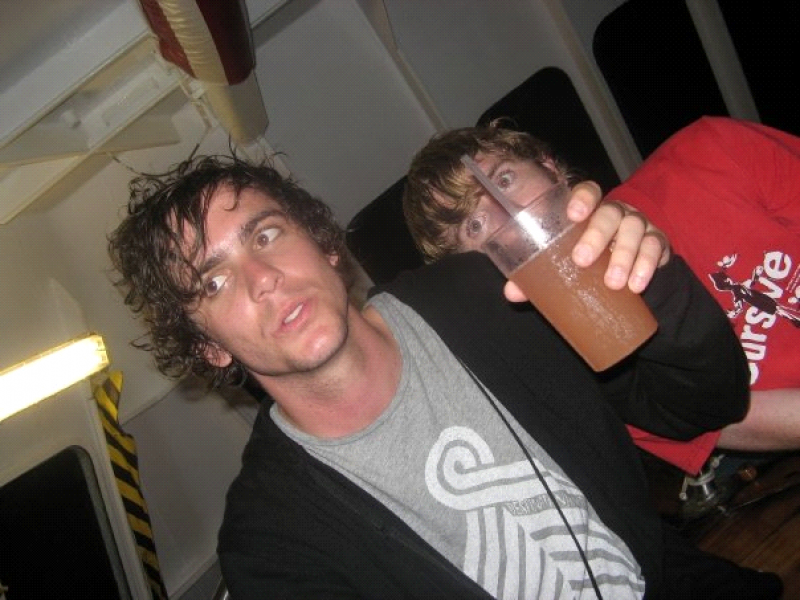 This was taken at the end of the video shoot for the song Blue Blood which is off our first EP. We shot it with our friend Noel Smyth on a budget of probably like $50, and pretty much just spent it on fake blue blood which we sprayed everywhere for an entire day. You can check it out HERE. 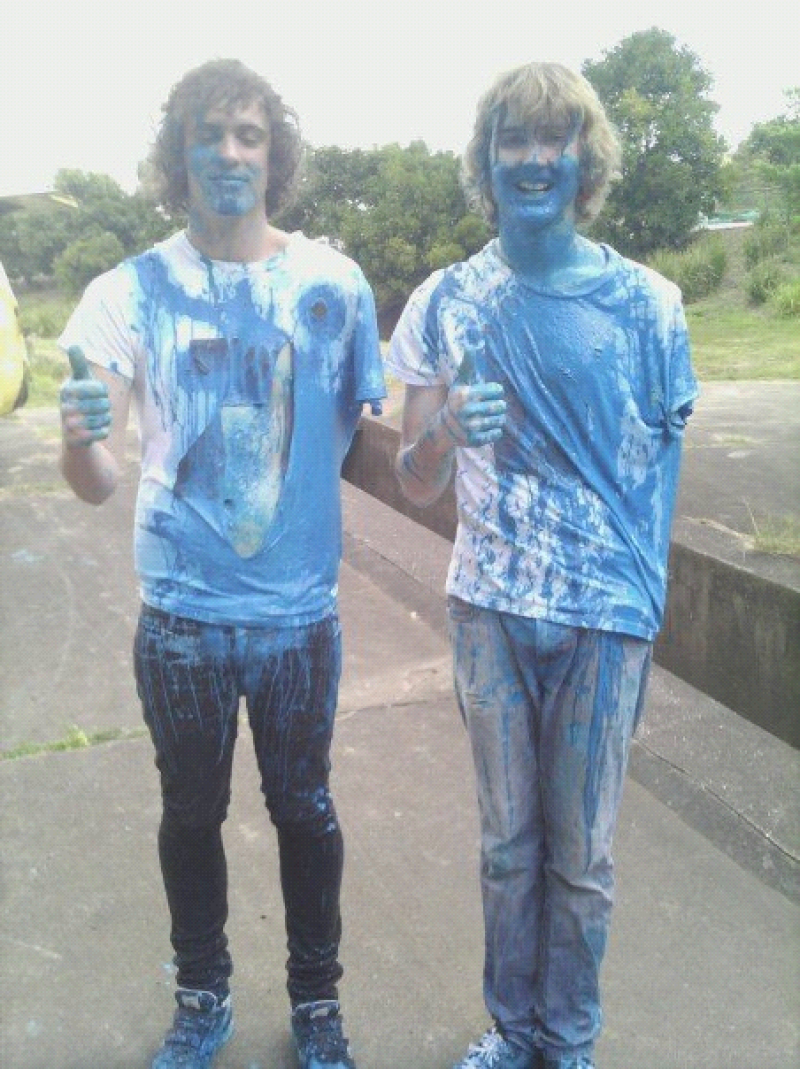 About two seconds before this pic was taken, Shane managed to slam his guitar into the back of his head during the end of our set on the Yacht Club DJs tour. After this we went backstage, Shane cleaned the blood off his face, we had some tequila shots, dressed up in Koala mascot suits and then went crowd surfing. We had some really fun nights on that tour and I can't wait to see the guys back behind the decks at our Melbourne show. 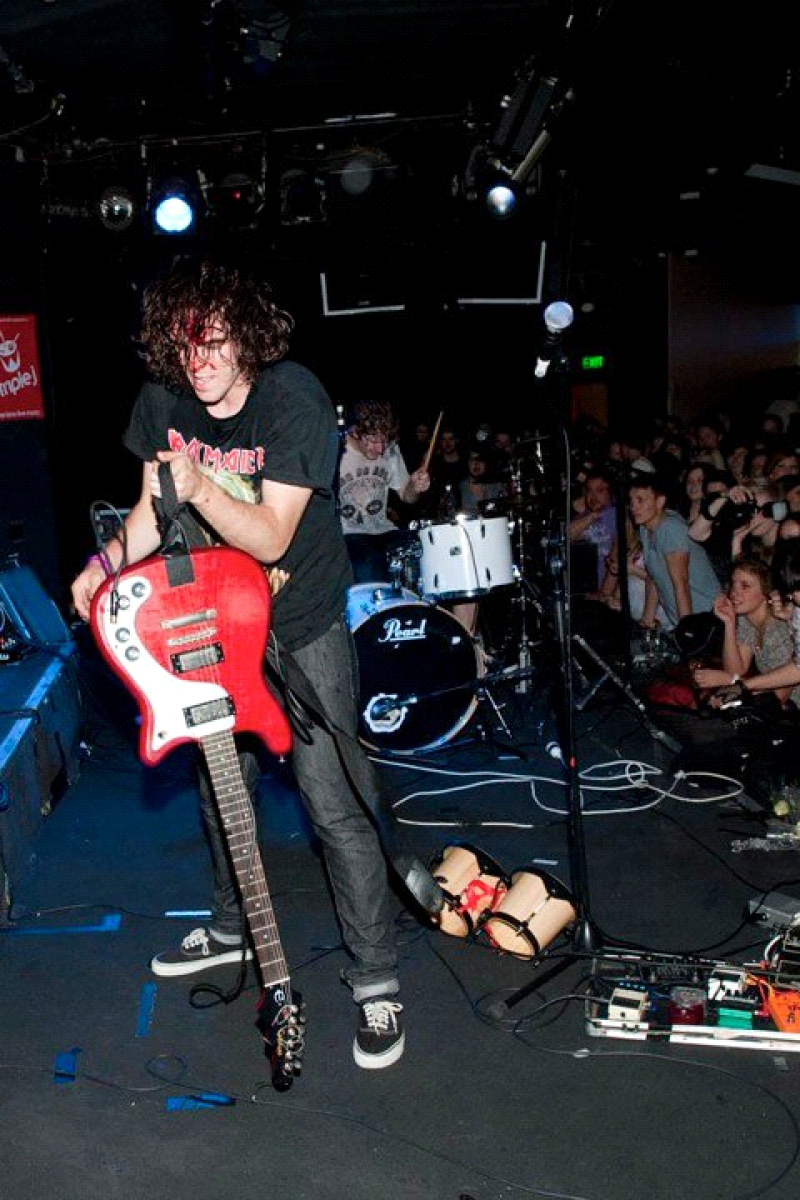 We started maxing out our credit card and doing a lot of international touring around this time trying to break out into Europe and North America. I remember coming back after one tour and freaking out about how were going to pay off our touring debts and then we found out that NME had started writing about us as well as some other big music magazines overseas. Once that happened we were really lucky to get some touring grants which meant we could keep going back over to do more shows. 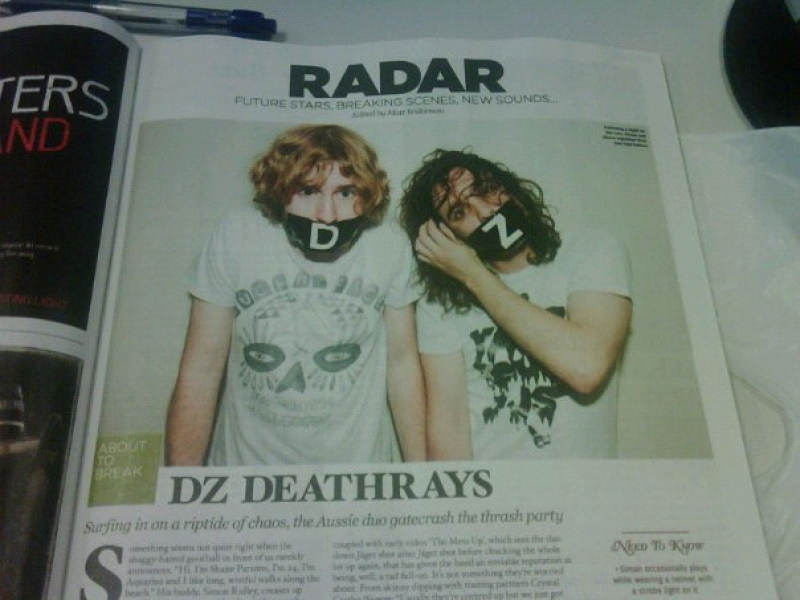 Or at least I'm fairly certain it was 2012. We had just arrived in NY at like 6 AM that day and then met up with some friends and went out in Williamsburg and stayed out until like 2 AM to try beat the jetlag. We put out our debut album that year and just toured it anywhere and everywhere we could over the next two and a bit years. 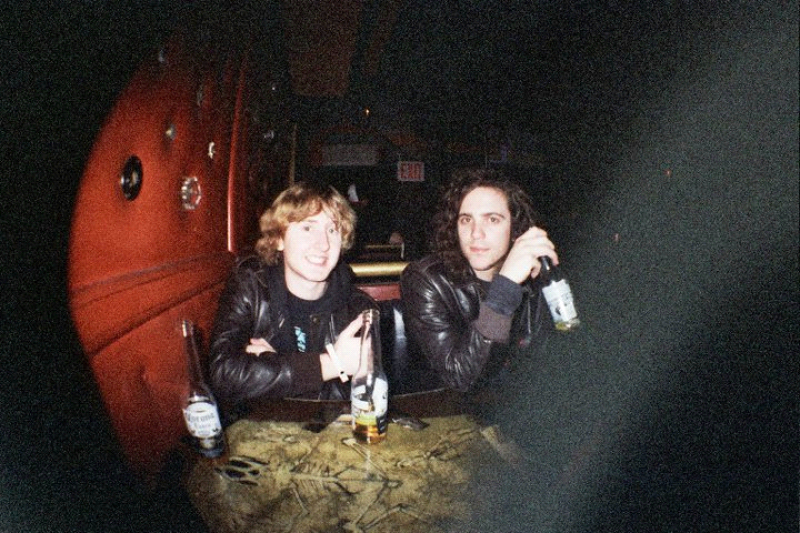 Here's us kicking off 2013 at Falls Festival down in Lorne. We had the midnight slot, but I think we played straight after the New Year’s Eve countdown luckily because we always manage to screw those up haha. We had been going down to Falls Fest pretty much every year we could just as punters even before we were a band so to be actually playing the festival and to so many people was a really special night for us. 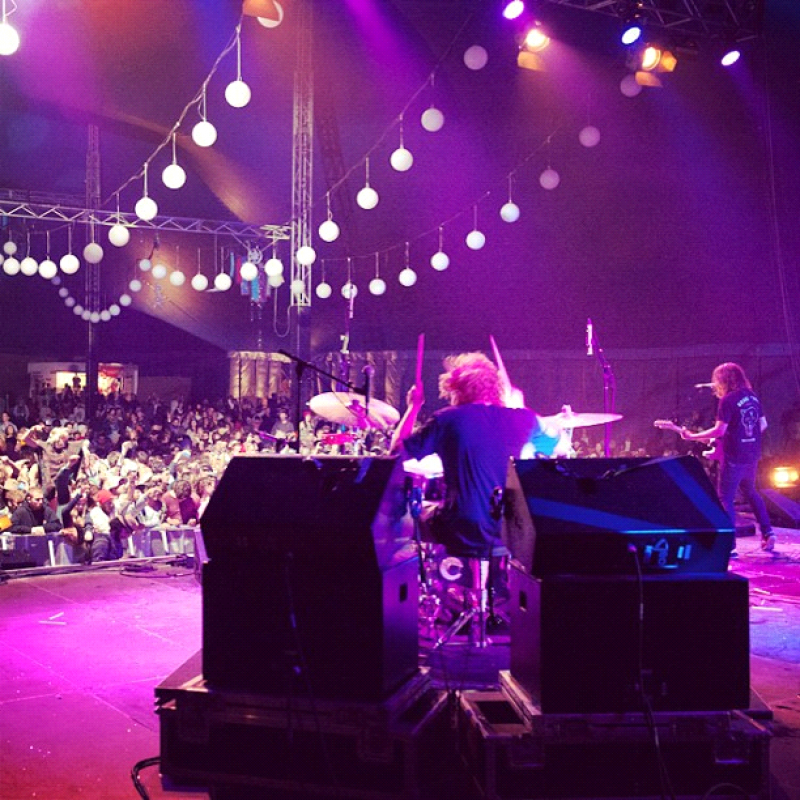 This a little behind the scenes pic from the first film clip we did for Gina Works at Hearts off our second record Black Rat, which was released that year. We shot this in Melbourne with our buddy Noel Smyth again. It was a pretty hectic shoot for us as the night before we were in the Gold Coast playing then drove back to Brisbane, grabbed some clean clothes and went pretty much straight to the airport to catch a 5 AM flight so we'd get on set by like 8 or 9 AM. Surprisingly don't look too tired though I guess, also I'm not entirely sure I've actually worn a tie since... 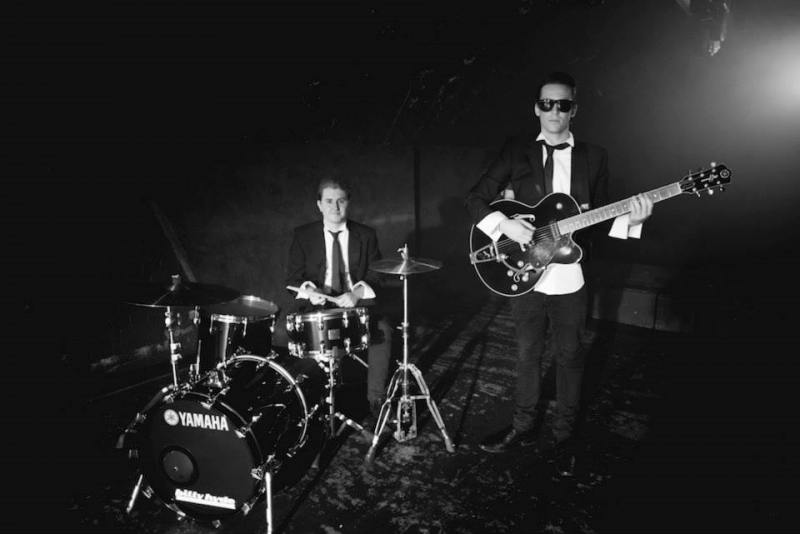 I feel like this was the year things really started to click for us. We had our second album out; it was the first year we had Lachlan come into the band as our extra guitarist and everyone seemed to really like the new record. This pic was taken backstage in Adelaide from our "Get Drunk or Die Trying" tour with Bass Drum of Death and Hockey Dad. In case you can't tell we all had a lot of fun nights on that tour... lots of post-show karaoke. 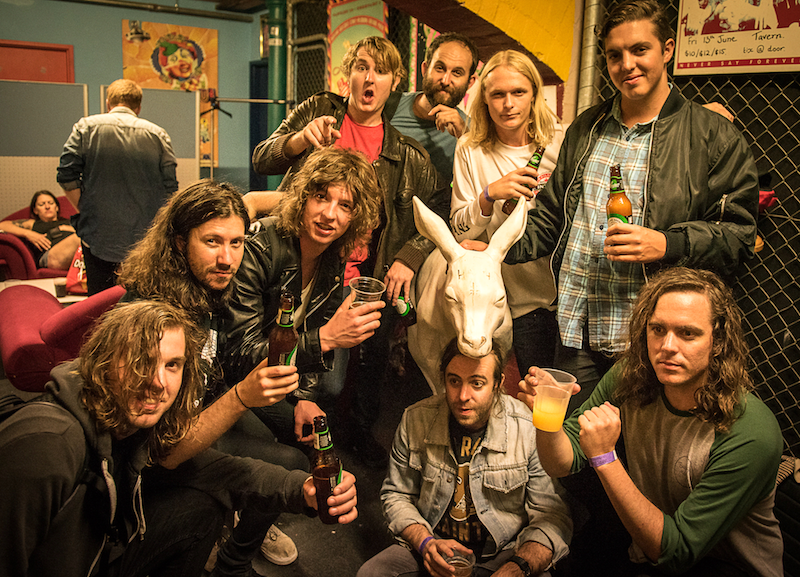 This is actually another pic from Adelaide at the end of one our shows with Ecca Vandal from the Pollyanna Tour. We would finish each show by inviting her up on stage so we could all do Sabotage by the Beastie Boys and she'd slay it every night. Ecca and her crew were some of the nicest, most talented people I think we've had the honour to play with. 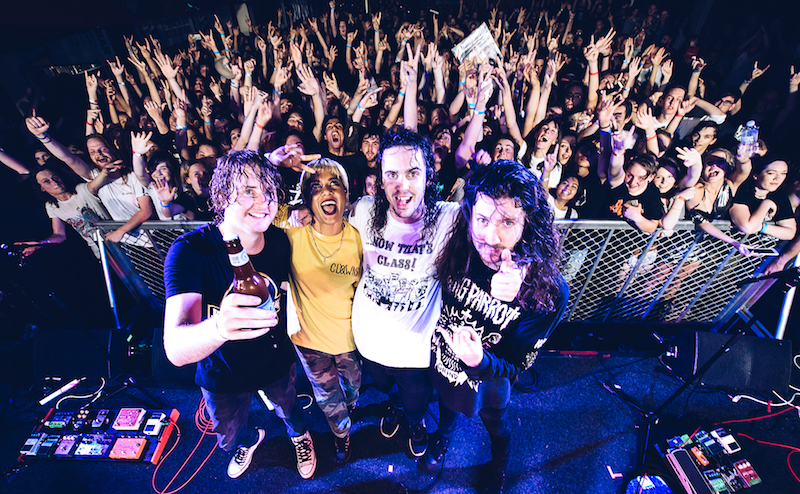 Here's Shane and Burke during the recording of Bloody Lovely. This pic was actually taken by Luke Henery from Violent Soho who came and hung out with us also. This was the second record we did with Burke out at the Grove Studios and this time the whole process was a lot more relaxed which I think you can tell from the pic.

This is us with our new best friend and absolute legend Murray Cook after having just finished playing AC/DC's Highway to Hell at Splendour in the Grass this year. This is definitely one of the most surreal moments I think we've been lucky enough to have had so far in the band. 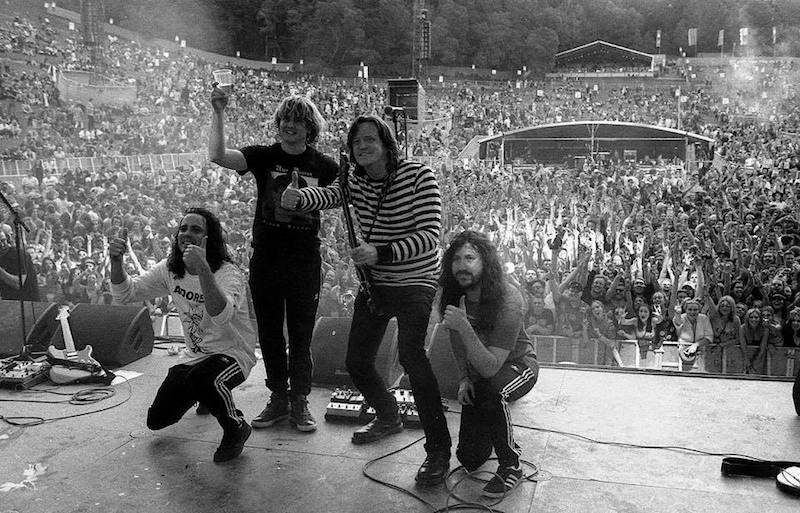 DZ Deathrays Tour Dates (click on the poster for tickets): 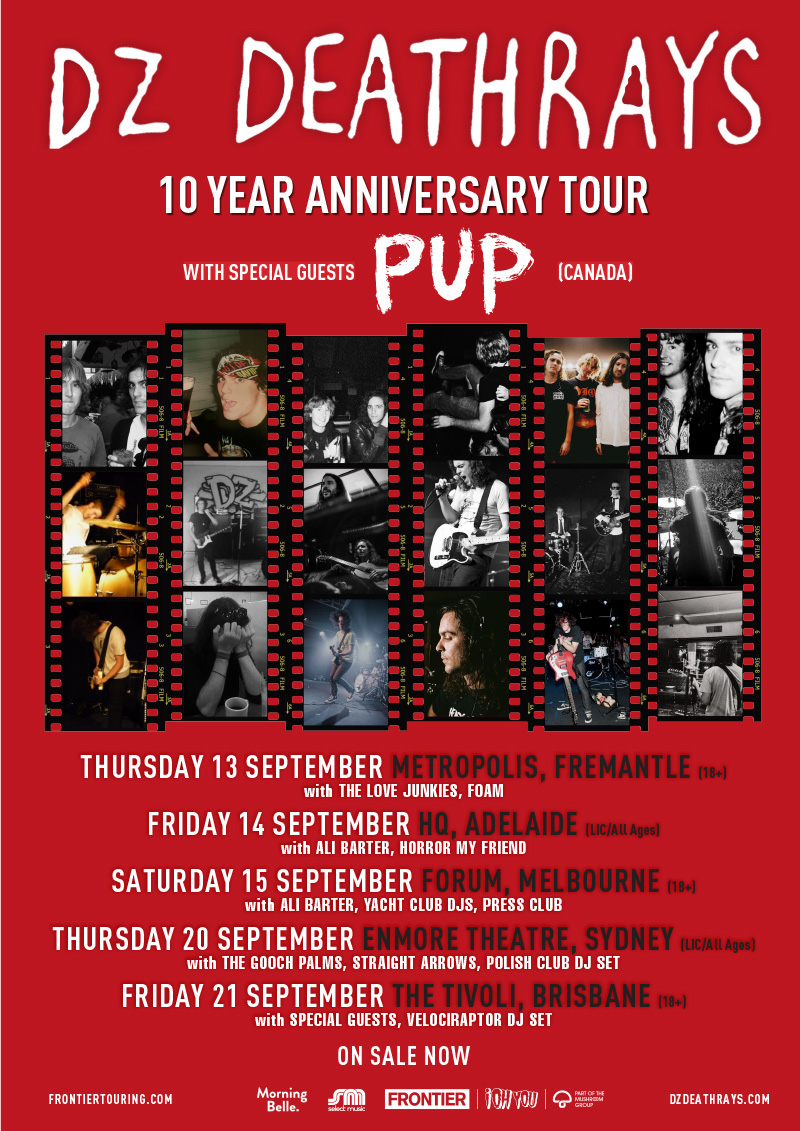 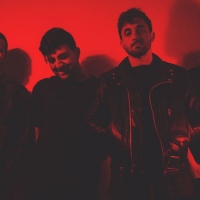 Premiere: CREO rise to exciting heights with soaring new single, In The RedThey've got some big launch shows early next month to celebrate. 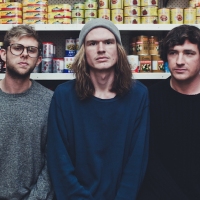 Introducing Perth's Girl York and their romantic new single, Dandies"The track serves as a reminder; everything is going to be okay, life is worth the risk, and there's no reason to worry."
Bands