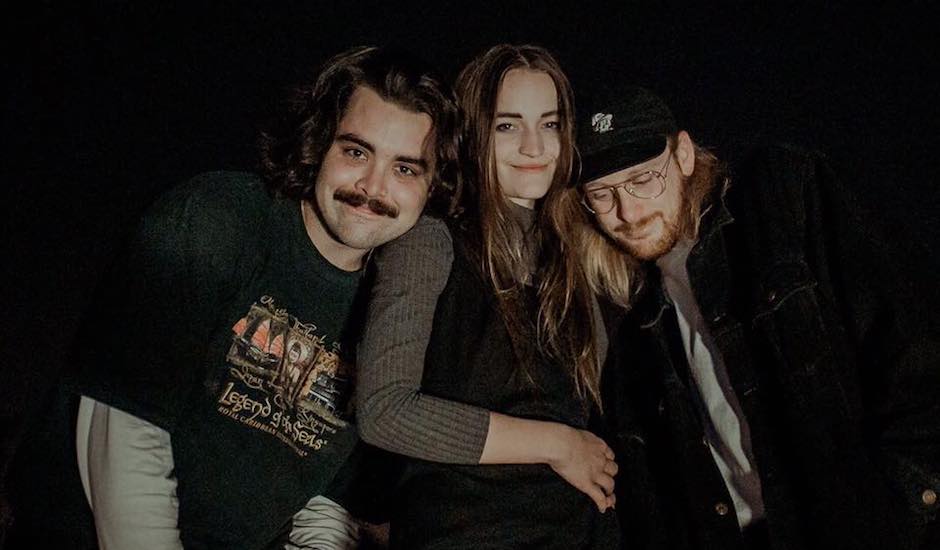 Ask almost anyone in Newcastle’s music scene about RAAVE TAPES and they’ll immediately reply with a song they love, gush on about how nice they are, or simply just reminisce on that time frontman Joab Eastley made them sit in a circle mid-gig and compliment the person next to them. Every town has its homegrown heroes but unlike pretentiously using them as a claim to fame, Novocastrians far and wide treat the dance-punk trio as if they’re family. It’s not hard to see why.

RAAVE TAPES are a band of many talents. They churn out music that dances a fine line between fuzzy, thrashing punk and moody, synth-filled electronic stylings with ease. They put on one hell of a live show, pushing blistering energy to the forefront to create a sound much larger than just a simple guitar/bass/drums combo. They seamlessly worked Ketamine into their latest single k bye without saying anything that could get them into trouble. And most recently, they’ve presented us with RAAVE TAPES Shut Down The Argyle House, which sees the iconic Newcastle venue host 20 acts from around Australia this Sunday for a little throwback to the good ol’ house party (and help promote the YOUR CHOICE campaign). 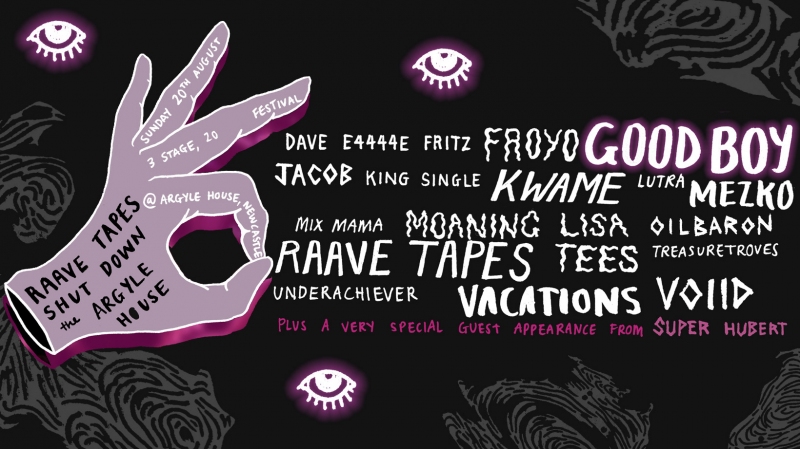 It’s not unusual for this group to dabble in events, having previously hosted a few charity gigs along with a sell-out show at The Cambridge Hotel and a Winter Wonderland themed warehouse party. This round, however, has been lovingly crafted by Joab Eastley and Love + Rent manager Ben Cooper, who sat down one day and curated one of the most diverse line-ups around lately – in both gender and genre.

With only a few days to go before RAAVE TAPES take over, we had an unfiltered chat to Eastley about dark electronic influences, making the Argyle House a safe space for all, and who would win in a musical version of The Hunger Games.

Joab Eastley on the memorable k bye hook, ‘I don’t know what you said to me but it sounded like Ketamine’:

It was a Sunday evening and I’d had a house party in Newcastle. I thought I’ll go along, see my friends, watch the bands playing… I got there and literally five times in the space of 20 minutes I was offered Ketamine. I was like woah calm down, it’s a Sunday! I have work tomorrow! Don’t you all have work tomorrow?! I was just a bit taken aback by everything like why is everyone doing a heap of ketamine on a Sunday night? It was all a bit much for me, so that was in my head and the hook just came out of it.

On the creation of k bye:

The lyrics to that song were written a long time ago. I had it stored up, and the riffs were all there, just not in that form. The first time I wrote it, it was more of a down-beat, dark electro song, with all the guitars obviously but using synth pedals suddenly made it seem quite electro. I wrote it with a drum machine and I sang it quite morbid, very monotone and low. That would’ve been one-and-a-half, maybe two years ago, in a much simpler time when I was much more of a naive, young chap.

When I was younger I was into garage-y sort of rock, not so much grunge but very much mid-2000s rock. Death From Above definitely had that impact on me. They’ve got those dance-y vibes but still dirty upbeat grunge-y stuff, so I loved the idea of melding that. I was just obsessed with guitar gear, like pedals and sounds. That’s something that excited me more listening to a song instead of the hook or melody or vocals, it’s always the sounds that get me going. There’s so many variances and so many little tricks in production that I try and bring over to the rock world and make it a bit more interesting.

RATATAT are so good! That’s sort of in our thing too, the whole dance and rock melding thing. I love that. And early Daft Punk, you can’t go past early Daft Punk. The squelchy stuff, anything squelchy with a meticulously crafted song structure. I love song structures that have a purpose, that are meticulously planned where it’s not like oh here’s a chorus and a verse and a bridge. Instead it’s like alright let’s play this riff for ages, then there’s a drum beat, then a snare comes in and everything makes sense! That really makes me happy. I love Gesaffelstein and Crystal Castles as well.

All of our stuff is very simple, I don’t try to put too much into it in terms of changing keys or anything, if you listen you’ll see it’s all just one main riff or theme just altered slightly for the chorus, verse and bridge. I’m trying to get a lot out of something very simple; just pick one little riff and see what you can really milk from it. We write songs and I’m like 'Hey Lindsay what colour pedal should I use?' She just says a colour, I’ll click that pedal on and just see what sounds I can make with that. If it doesn’t work then it doesn’t work.

On the progression of RAAVE TAPES since their debut EP:

We didn’t know who we were as a band, we were just making songs and seeing what worked. That first EP is pretty much an amalgamation of us just trying to figure out what we were, which is why there’s so many sounds on there. We put a bit of effort into it but we didn’t really know what we were doing. From then on we started writing more songs and it came to a point where we had to pick a direction but we didn’t really have to pick it, it just came naturally. We wanted to just go down that aggressive, dark electro path, like Crystal Castles, but with glitter. So it’s still a bit cute.

How the RAAVE TAPES Shut Down The Argyle House show came about:

Well it came about when I was drunk one time and was like hey let’s play The Argyle and everyone was like no that’s silly and I thought screw you guys, and I made it happen. It’s sort of an amalgamation of two things we’ve done in the past. We’re known for doing dumb things like this. In August last year it was coming up to my birthday and I called in a few favours and had 14 bands play a big warehouse festival in the middle of Newcastle for charity. I’m actually a pre-school teacher and one of the little girls I taught got diagnosed with leukemia. We were all pretty sad so I thought how can I help? We put on this festival where everyone played for free, it was $10 on the door for entry, and we ended up raising $6500! I also helped my friend Sam put on the Fuck Cancer show (The Cambridge Hotel), which was nice.

On who would win if RAAVE TAPES’ Argyle House show suddenly turned into The Hunger Games:

Kwame would win because he’s just so big I wouldn’t mess with him; he’s like 6 foot something, I’d just run the other way. The rest of RAAVE TAPES would die first; Lindsay and Lewis are just so lovely and so wholesome that they’d die but I won a premiership one time a couple of years ago (Kurri Kurri Bulldogs, 2015, Third Grade) so I know how to sustain things and I think I could keep going. VACATIONS would heaps die first because they’re so lovely and nice and play lots of video games, they’re real nerds. Actually, FROYO might go first, I haven’t met them but they seem like the loveliest people and wouldn’t be able to hurt anyone.

On making The Argyle House a safe space:

It’s something we’ve always been very fond of. I don’t like people hurting each other or being mean, and even the idea of anyone being homophobic or sexist at any of our shows doesn’t make sense. We’re going with the Your Choice posters from that big campaign put out all around the venue and having a big sit down with all the security staff to talk about what we want out of the night and how we expect our patrons to be treated - just to make sure we’re all on the same page.

On promoting diversity in music:

It was none of that oh let’s pick bands that pull, let’s try and get all these big bands that’ll pull heaps of numbers. None of that. It was more let’s pick bands we like, with a focus on diversity. That’s one thing Newcastle does struggle with - female bands – and it sucks. We have heaps of dudes, especially in the rock sense, so we tried to bring in quite a few non-male acts for the bill this time. We want to encourage more girls to get up and be a part of it.

It’s just so varied, there’s a lot of different sounds out there. There’s also a lot of bands that don’t really branch out of Newcastle; some bands that are huge here have massive hometown audiences but don’t really go that far. In the last couple of years a lot of them are branching out further but it’s the kind of thing that’s burgeoning. Burgeoning is the word! 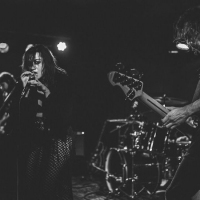 Moana Interview: Rocking out for OXJAMOXJAM 2 hits Mojos this Saturday, we sit down with one of the headline acts. 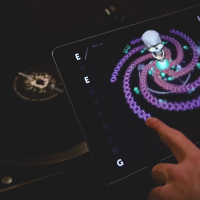