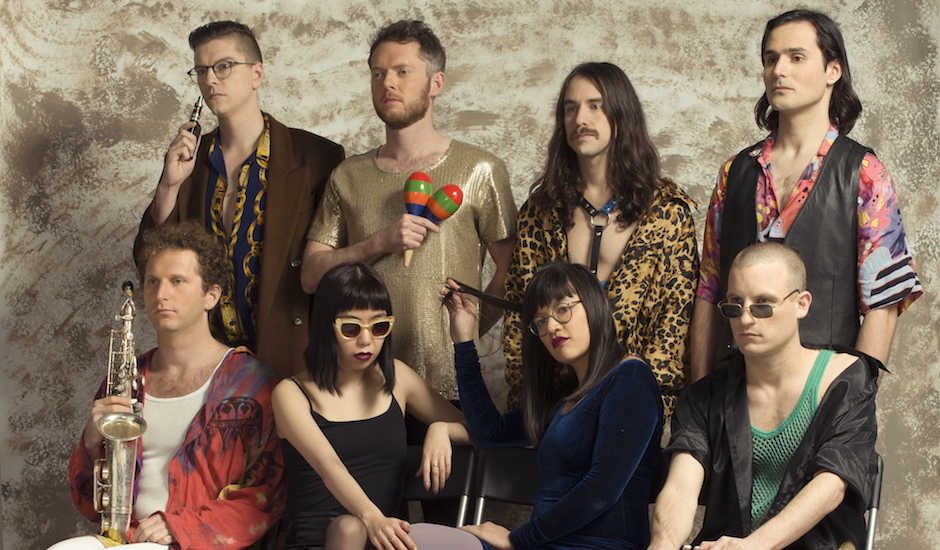 After releasing their brilliant Afterlife LP earlier in 2016, the 8-piece, body music extravaganza that is NO ZU returns to the west on Saturday 5 November, playing Jack Rabbit Slim's in conjunction with Cool Perth Nights and Pile-fave local fashion label Gala Apparel. To mark the upcoming occassion we had a chat with one of the main brains behind the large scale operation, Nicolaaas Oogjes, to find out more about the band's "heat beat" ethos, expanding the ZU-niverse, and putting a sex back into Australian music.

Check it out below and grab tickets to the Jack Rabbit Slim's show HERE.

For someone new to NO ZU and may not be exactly across what “heat beat” constitutes, how would you explain it?

Heat Beat means rhythms of high temperature, sex-beats, and hallucinogenic feelings of the most sordid kind… or simply, percussive, outsider groove-music? It’s up to you. Both words; heat and beat have visceral connotations and that, when together, lends themselves to somehow accurately imply that the music is for the body before the brain – well at least the analytical parts. It rhymes too, which is fun.

We imagine it can get pretty tough keeping a four-piece together, how does it all work with NO ZU’s 8 members, especially when it comes to rehearsals and touring?

Yes and no. Sure it means more messages, texts, calls and flight to book, but also NO ZU, the project, is set up in a strange way compared to other bands. I do the leg work with help from Chapter Music and James Ware at Waving At Trains, while the other (more talented) members can opt in creatively and for performance whenever they like. It’s a no strings attached collective first and foremost – so it is built into the DNA to be pretty free and easy with organization. Most people at rehearsal is enough, most people can do a gig – that’s enough, or if I and others really want to do something – we’ll find a new ZU to help out. The crucial thing is that anyone that wants in, really wants in and to have a ZU-party within the ZU-niverse and have a Heat Beat ball. We have enough ZUs around the place now to create franchises in each countries major city, I think! Everyone involved at any one time is really valuable and appreciated, but at the end of the day, we all do it for the Heat Beat gods in the sky above all.

You’re coming up to almost 10 years of NO ZU, which is pretty impressive for any band in this day and age and more so given the size of the group are some of the key ingredients involved in keeping the band (or at least the core of the band) together?

Well, as I touched on in the last answer, the set-up of NO ZU is unlike any other band I know. I can’t see why NO ZU will ever stop unless it’s decided that the perfect Heat Beat song has been created… but such a concept is a mirage and impossible. It is eternal…

The project was just about fully-formed when I created it in 2007 and through several line-up changes it maintains the same ethos. The core of the band is changing at the moment due to the departures of Andrew and Adrian, who played live with me from 2009, but the (heat) beat must go on, despite mine and the band’s love for them as people and musicians. Mitch, Kieran and Daphne in particular have been with me for a looong time now and, in fact, Cayn and Becky have been ‘doin’ the ZU’ for a good while now too. I guess (finally getting to the question), keeping the project going has come down to being forever flexible and excited about the ever-mutating periods of the ZU while keeping a strong aesthetic purpose. Having, a very simple and almost brain-dead (but probably very, very nuanced) manifesto for what NO ZU is helps and also having boundaries and deliberate restrictions is crucial for focused creativity.

You released album number two, Afterlife, in February this year, the reception to which has been pretty great, had much changed for you between it and 2012’s Life?

Life was all about uncontrolled euphoria and day-glo brashness. It was about looking deep into the absurdity of everyday life and finding the art within Australian suburbia. Life was also about the opposite of death – which has been a consistent lyrical and aesthetic theme, morbidly enough… With Afterlife, I feel that, with Life as a basis, things delved deeper into a nocturnal and more expansive world. Without a doubt the conceptual focus switched from suburbia to Australia as a whole, back through a blood-red history and into Gondwanaland. Sonically, the tracks that would end up on Afterlife became deeper, more sure-footed, tougher and bold. The addition of horns and duel vocals from Daphne and Becky added a hook-ey, ‘catchy’, rhythmic and melodic element to rub up against the more abstract elements, which was really exciting and new for me.

What are some of the most notable themes explored across the eight tracks on Afterlife?

The subconscious under-current behind the moods of the record include ideas about our dark Australian history of colonialism (mainly presented in dance-lyric and fetish metaphors), religion and human belief systems, sexuality, gender roles, body movement, fear of death, ugliness and beauty. Despite how grim this may sound, the general presentation of all of this is done in a humorous and satirical way. The music isn’t about being righteous or about having politics at the forefront, but it definitely is about NOT shying away from what is important to you.

Sex and sexuality are ever-present in your music and vibe, and it feels very fresh in the Australian music scene, which at times can feel quite dull and neutered, do you feel that at all and who are some of the other artists you guys roll with/recommend?

I totally feel that and I’m happily surprised how close-to- the-bone you are of our intention for being so up-front with that. I think I have always been happy to be reactionary to what other art and music is around that I hear and if there is a gap for us to be happily gaudy, bizarre or bolder in some way, NO ZU naturally heads there. We’re a product of time and place. I hate safety. I hate it in music. We’re all adults here – let’s push ourselves and question where the line is – otherwise, there is no point. There’s just so much history of art and music that was so dynamic and daring in different ways to just sit back and try to make something that presents itself as pleasing, that nicely fits in to a scene, onto the radio, onto Rage and so on.

One of the most exciting artists I have heard and can recommend in this respect is Smokey. Chapter Music released a sort of best-of of his music that is so overtly sexual, but is also so very honest sounding. It’s incredibly accessible as it plays with all types of music tropes with a nod and a wink and it’s so welcoming and inclusive that it just breaks your heart. You can’t help but buy into the whole, weird and varied world of Smokey. Such things inspire me to keep ZU being self-referential and expanding the ZU-niverse. Parliament and Suicide were experts in this also.

Perhaps one day our version will make sense to someone as a footnote in a very small way to some of the off the map music happening in OZ in the 2000/2010’s… or not.

Your recent(ish) videos (Hi Gloss, Spirit Beat and Ui Yia Yia) are all bizarre yet incredibly captivating – what goes into conceptualizing a NO ZU video?

Every element just has to feel natural to the underlying ideas behind the tracks and reference our own ZUisms. Often this is done with symbols like the taxidermied kangaroo in Ui Yia Uia, erect giant lipsticks in the Hi-Gloss vid or sweaty, macho Aussie men wrestling in a disused mining quarry in Spirit Beat. These all imply various things that relate to the themes of the records. There isn’t anything accidental or there to simply look cool. For this reason it’s very easy, because there is just so much to draw on from the ZU-niverse going back to 2007. I like to use and reuse our themes so that our body of work is all one thing, as opposed to forgetting our past and presenting our ‘new clothes’ with each release.

Have you had much chance to work on new music, is there anything in the works for later in the year/moving in to 2017?

We have been working away on new material in a very free form brain-storm style for the last few months. This has included jamming on different instruments than what we usually play in skeleton groove groups while recording everything and also Kieran in particular, has been creating some really exciting synth ideas. I’ve been letting the aesthetic and major conceptual ideas come to me and I think I have finally had a breakthrough recently! You know, it just can’t be forced, but you have to just keep spit-balling until the pieces start fitting together. Hopefully, they do so quicker this time! I’m praying to the ZU gods to have a record ready for European summer touring, but it might be too late!

There IS something in the works for the end of the year and start of 2017 aside from a new LP. We’re bloody ecstatic about a collaboration with some ZU idols, that if you dig deep enough into our social media, you can probably work out who and what that is…

You played a couple of sold out shows in Perth earlier this year, what can we expect when you make your return this November? 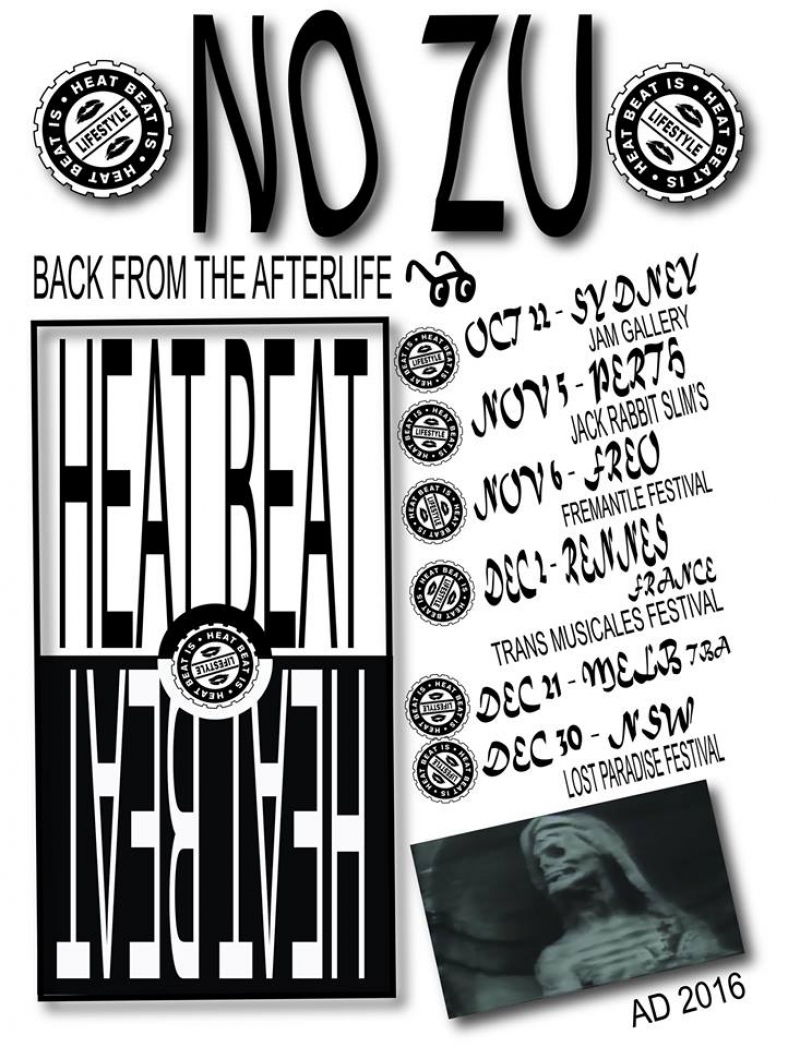 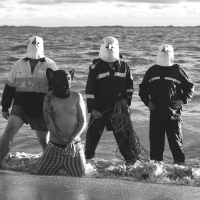 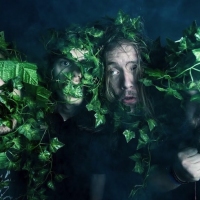