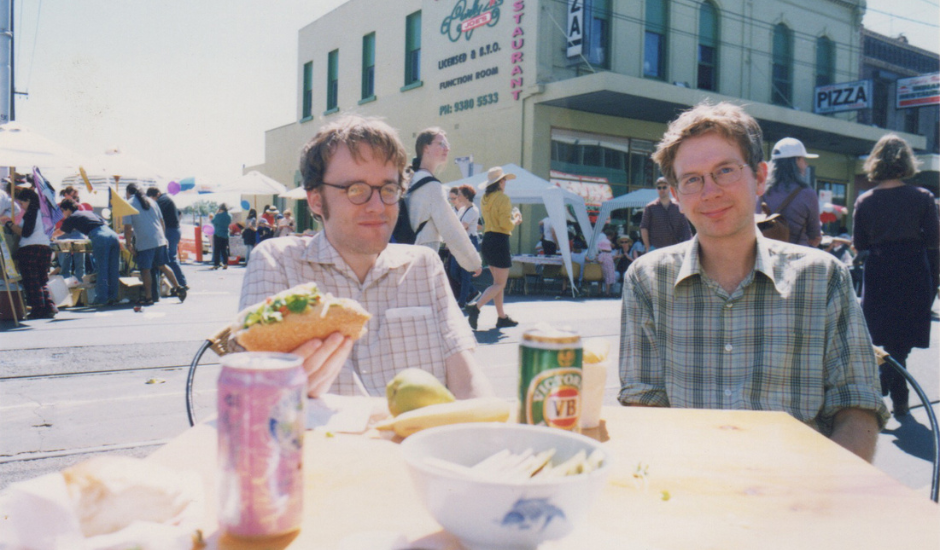 One of the nation's longest running independent record labels Chapter Music celebrate 30 years of championing adventurous and exploratory music this month, teaming up with ALWAYS LIVE and Triple R to present: Chapterfest 30 - a huge all-day party featuring artists from across the label's lifespan.

Owned by stalwarts in the Naarm/ Melbourne indie scene Ben O’Connor & Guy Blackman, Chapter Music continue to successfully support and nourish an impressive and expansive roster of artists through the ever-changing climate of the music scene over the past three decades. With artists including Naarm’s heat beat icons NO ZU, revered Eora/ Sydney songwriter Laura Jean, eccentric pop auteur Gregor and future rap duo Teether & Kuya Neil, plus a stack more (who will all be performing at their upcoming festivities), they’ve come a long way from their humble origins of a 17-year-old Blackburn releasing cassettes of local Boorloo/ Perth underground bands to taking out the AIR Award for Best Independent Label in 2019, whilst keeping their focus on supporting great music.

With Chapterfest 30 happening this Saturday at the Northcote Theatre VIC, we took the opportunity for Ben and Guy to conduct a Q&A between each other to discuss influences, queer record labels, and reminisce this huge milestone for Chapter Music. Be sure to take a read through what they had to say below. 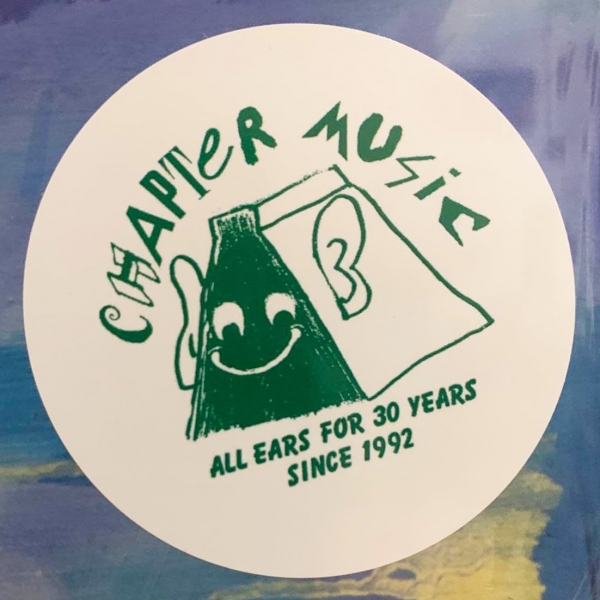 Ben: What labels influenced you to start Chapter?

Guy: This was 1992 when I was a few months away from turning 18, and I was into shoegaze music so I loved Creation Records (My Bloody Valentine, Ride, Slowdive etc). I also loved twee indie music so K Records in the US was an inspiration, mostly because of their main band Beat Happening. I really liked Melbourne cassette label Toytown, they did oddball home-recorded pop music and inspired me to want to put out cassettes. There was a local Perth label called From The Same Mother who started a year or two before Chapter, they did weirdo lo-fi pop and noise music and were a big inspiration. And also Melbourne label Summershine, they put out lots of seven inch singles of jangly pop like The Earthmen and The Rainyard.

Ben: What would you be doing if you weren’t running a record label?

Guy: I have only ever wanted to run a record label since I was 16 years old, so I don’t really know. I’ve been like a dog with a bone ever since. I guess I wrote about music for a living for a long while too, music journalism for The Age and other places, but I only really did it so we could afford to put out records on Chapter by bands that we loved that weren’t going to make any money! At this point in my life, if it all ended tomorrow maybe I’d just like to do something that was kinda low stress, like maybe work a few days a week in someone else’s record store?

Ben: Are record labels necessary in 2022?

Guy: They are and they aren’t. These days it’s pretty straightforward for people to put out their own music, stick it on Bandcamp and get it up on streaming services. And if they’ve already built an audience from live shows they can do alright all by themselves . But labels are still really helpful, to cut through and reach people. A good label works really hard for their artists, and that gives them a better chance of getting heard. Plus it’s nice to have a team around you if you’re an artist, someone to bounce ideas off and tell you you’re a genius!

Ben: What do you wish you knew earlier?

Guy: No-one else has any idea what they’re doing either, we’re all just making it up as we go along.

Ben: How does being a musician influence the way you approach running Chapter?

Guy: I guess I’ve always been a fan of a really well-written song, in whatever form it comes. I did years and years of music theory and piano lessons etc when I was a kid, but I hope that didn’t make me a snob - I don’t really care about the technical side of music too much, just the self-expression. I think it’s actually the lyrics more than the music that I get excited about - I like when people have a songwriting voice that’s totally their own.

Ben: What do you want people to think of when they think of Chapter Music?

Ben: Why do you type so loud?

Guy: This is a question that comes up a lot when we’re in the same room working together. I’m sorry Ben, the keyboard on my laptop is just really noisy, and I know it drives you crazy! 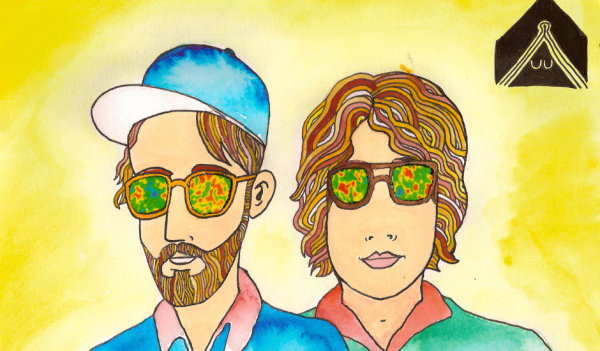 Guy: What did you think of me when you first met me? (lol)

Ben: When we first met, I was 18 and you were 20. I remember thinking you were like an old man and a toddler simultaneously.

Guy: For the first few years you were involved in the label in more of an advisory capacity. What made you want to take the leap into being a full time partner in the label with me?

Ben: An advisory capacity- is that a nice way of saying I like giving unsolicited advice? I feel like in the first few years I mostly helped out with the menial tasks of running a label, especially in the 90s when we were hand folding 7” covers and photocopying fliers.

You had been playing in bands and doing the label for a few years, so initially I thought of Chapter as your thing. I think I wanted to be involved in music on my own separate from you, so I worked in venues, assisted music managers and volunteered and worked in community radio among other things. It meant that when I became a partner in the label I felt like things were equal and I had experience and knowledge to contribute.

Guy: How have we lasted this long? 30 years is kinda ridiculous.

Ben: I’m not sure, hopefully every good label is different from every other label whether they’re queer or not. Maybe as a gay couple we think more about having a balance of different voices represented, though I’m not sure we’ve always got that balance right.

Guy: What are some non musical influences that have informed your work with Chapter?

Ben: I’ve always liked when an artist has a vivid, long-range creative vision that’s coherent but surprising. Filmmakers like Rainer Werner Fassbinder, Goran Stolevski, Catherine Breillat, John Cassavetes. Writers like Lisa Carver, Mary Gaitskill, Dennis Cooper, James Purdy. I think working for Perks and Mini in the 2000s showed me a model of a couple running a creative partnership that was really inspiring.

Guy: What are some record labels that you're inspired by at the moment?

Bem: There are so many, it feels like there’s more great labels around now than ever before.The list is endless. This could easily be a list of 30 local labels I think are great but here’s 5 Melbourne labels I really like.

Guy: What would you want to do if Chapter had a huge hit and we were suddenly millionaires?

Ben: It’d be nice to be able to employ people full time. I really want a holiday. 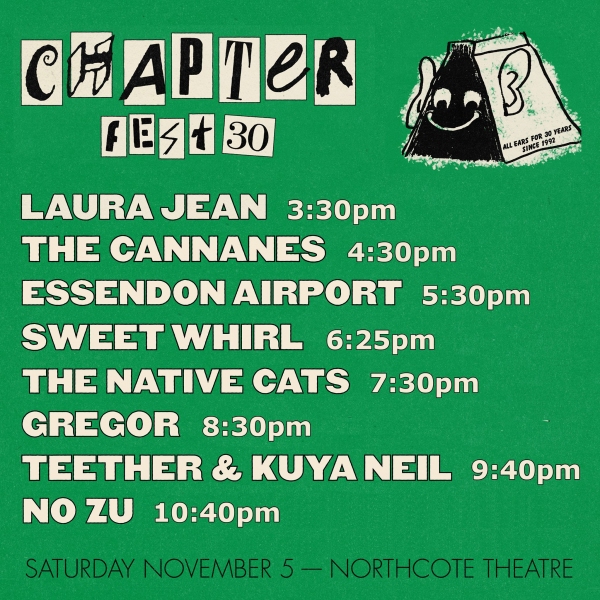 Tickets on sale via Moshtix now. 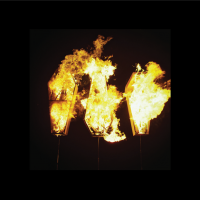 Album of the Week: Show Me The Body - Trouble The WaterNYC-based experimental hardcore trio have something in the water on their third studio album + new records from King Gizz, Theo Parrish, Fred Again.., Drugdealer and more 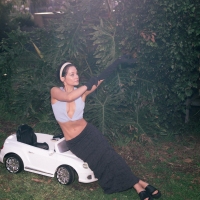 Grace Sanders Gets ImpersonalBoorloo-based alt-pop artist gives us the lowdown on the musical direction of her new EP, getting deep and personal with lyrics, tying visual art to music, creative process, live shows and more
Get To Know

On The 1975’s genre-fleeting new record Notes On A Conditional Form, the UK band attempts to make sense of the madness.