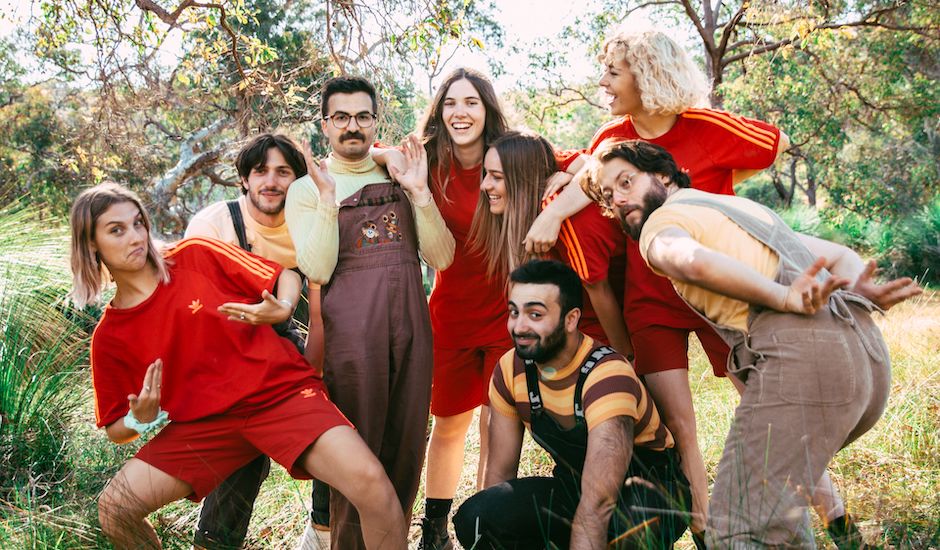 Despite their absurdly long name making it impossible to frame the band in headlines, Approachable Members Of Your Local Community have done anything but shy away from the limelight across the past few years. Since their early work back in late-2017 through into early-2018, the outfit have grown into a high-point of Australia's brilliant alt-pop scene and the many pockets it contains; a trademark light-heartedness consistently present regardless of their work's lyrical themes and how deep they may go, their music consistently acting as a source of relief in an otherwise quite gloomy and negative time.

It was something present on their 2018 debut EP If there's anything you need, please don't hesitate to contact us - a release that packaged their early work into a distinct collection of introductory tracks - while their work since has seen their growth and evolution as a band mapped out for the world to see, singles like On + On and Citrus Fruit taking their sound into new directions and forms as they consistently one-up themselves as a group bringing everything: great music, a great image, and a great ethos all included.

It'd be a near-crime to not call Approachable Members one of 2019's success stories, but in reality, they're only getting started. Last month's DULCIE-assisted Strangest Places sees them merge with another 2019 success story - the Perth-based four-piece discovered nationally towards the start of the year - for a track that preludes what's to come. Included in that, is a full new EP - Love Thy Neighbour, which arrives on January 31st - and a national tour that'll take the group to new venues in the months following, capped off with a SXSW debut in March 2020.

"The story of our interstate partnership (with Dulcie) began in the greenrooms of Australia, in what we call the Bitter Winter of 2019," says the band's Micky Fisher on the track. "We immediately developed a collaborative commercial relationship with a strong grounding in mutual respect and synergies. Hands were firmly shaken, and the deal was done: a song was to be made. Strangest Places is about making new friends, being in wacky places, and getting up to the business of life."

As mentioned, there's plenty more to come from your favourite approachable members in the year ahead, and DULCIE are bound to burst into something special within the next twelve months too. So, to celebrate their bright futures ahead and the collaborative partnership newly formed, we got the two forces to interview each other about crafting sounds, Kylie Minogue, West Australia touring and the ol' faithful three stripes. Check it out below, alongside Strangest Places' official video clip and Approachable Members' forthcoming tour dates:

1. What’s the backstory to Dulcie – and how did you come up with the name?

We all met at the start of 2018. Sas and Meeks grew up together in a town called Denmark 5 hours south of Perth. Ash and Madi went to the same high school, Ash was a couple of years ahead of Madi in school but were both in the same music program. We all came together at the start of last year as we started studying music at WAAPA (Western Australian Academy of Performing Arts). We basically had one little jam together in about April and hit it right off.

The name comes from Ash’s great grandmother who was a singer and her name was Dulcie. Ash thought it was a cool name and really unique so we just settled on that and it stuck! Apparently it means sweetness in Latin too so that’s really nice!

2. How do you always manage to perfectly match your overalls?

100% unadulterated synergy and the combined force of our positive energies.

3. The day Fall came out was a big day for us. We definitely did not have it on repeat in our studio – surely not. Anyway, we’re big believers. How did you start developing your sound?

As if you heard it before you met us?! We’ve actually been really lucky with this. Our sound evolves really naturally based on whatever each of us individually are listening to at any given time or what we grew up listening to. Somehow all of our combined influences match up and make sense together, writing and playing music together has definitely been a really natural process for us and we feel really blessed to have that. It’s all about balance and listening.

4. If you had to pick a band name longer than ours what would it be?

Particularly Approachable Gathered Individuals Within A Close Proximity To Yourself

5. Which approachable member would give the best job interview?

6. If you got stuck on a desert island with approachable members, what three things would you bring?

An inflatable crocodile, a broken umbrella and a frisbee.

7. It is the year 2000. Kylie Minogue releases Spinning Around. The world is nothing but one big Groove Disco. Fast-forward 19 years. It’s November. Kylie Minogue is headlining Falls. NYE. Which hit song does she play to close out the festival?

You’d think that she’d play Spinning Around because she couldn’t get it out of her head for all those years hahaha.

1. What's the strangest thing that has happened to you at a show?

During one of our recent visits to the Great Regional Centre of Ballarat, we were blessed to be joined by an amazing troupe of dancing cowboys in the crowd. We were transfixed. They stole the show, creating the greatest hoedown Ballarat has ever seen.

2. What's your favourite thing about coming to WA?

We’re big WA fans. Something which we find particularly striking is that there’s nearly no traffic. We’re also big supporters of all the roundabouts. Without picking any favourites, we have been known to enjoy visiting the Deep West to see you (Dulcie) and to collectively visit some form of heaven nature reserve.

In a past time, we had a deep affinity with playing for our local council in public parks. The vibe was everything. Family, trees, picnics, fun, community, councils, food trucks… Hey, to be honest, maybe all the other gigs are the strange ones?

4. What's the story behind the Adidas outfits?

The story behind our outfits begins in 1901. It was the era of the Federation. Our three families at this point were dispersed across the World, but what united them was a dream. Indeed, it was a vision for the future – that their great, great-grandchildren would one day Deliver the Party much-craved by the Antipodeans. In pursuit of this dream, they themselves formed a commercial partnership – each family taking one stripe. And so in 1901 there was formed a global corporation, the natural competitor to all international sporting brands. In 2017, the sleeping giant was duly stirred and so Approachable Members was born, rising from the menswear section in Rebel Sport, and thus carrying forward the intergenerational chain of history.

5. Do you think people are more likely to approach you because you have the word approachable in your name?

Getting approached is just a part of the job of being a member – because the community might not always look out for itself. It needs a watcher and a servant. We have found that if you smile, and invest in shaking many hands, that people will come out for a chat – and maybe even a five-course dinner function. That’s why we do what we do.

6. What's something strange that nobody knows about you all?

The strangest thing we all share is a profound connection to a particular Japanese restaurant in the Gold Coast. We dream about it every night, no matter what. Amimoto, if you’re out there – we miss you. 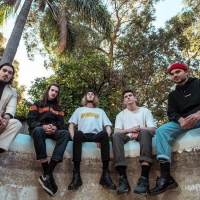 Premiere: Almond Soy unveil the clip for Coat, announce national tourThe Perth hot-shots will be sharing their next EP, Under The Wait, early next year. 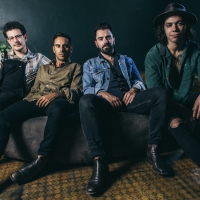 Meet Sienna Wild, who share a new track, You Wouldn’t Know, ahead of AU tourThe Melbourne-based group will be touring the track down the east-coast early next year.
Bands