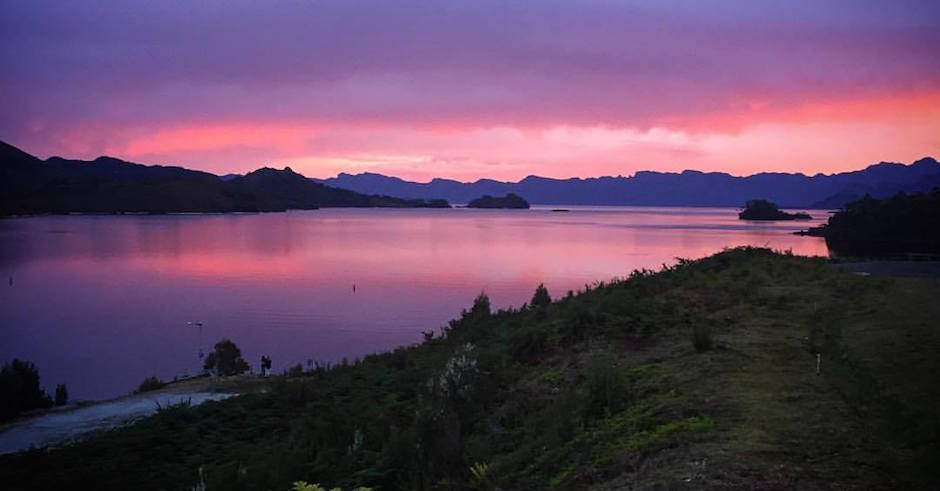 The Tasmanian Wilderness World Heritage area has always been a place of wonder and awe-inspiring beauty for those lucky enough to have witnessed it. And smack bang in the middle of this vast wilderness sits Lake Pedder. I can’t think of many places more idyllic to dance the night away under a star-filled sky, can you?

In the lead up to their first festival, the Rose Quartz team has focused in on every detail as they endeavor to create a sensory escape from the monotony of daily life. I spoke to Nathan Savage, one of the creators of Rose Quartz Festival, about love stones, why we both love Tassie and the commercial pressures that underlie much of dance music in the modern era.

The internet tells me rose quartz is the “Love Stone” or the “stone of unconditional love”. How did you settle upon the name?

This is true. The Rose Quartz stone is associated with love, friendship and affectionate energy. The name was a tip to the original Lake Pedder beach with its pink hue. We tossed up between Pink Quartz and Rose Quartz. Rose Quartz was also a fantastic music blog by Richard Mcfarlane in New Zealand. It stopped a few years ago and he since started the amazing 1080p label in Vancouver. We hit him up to check if he’d mind if we used the Rose Quartz name and he very kindly said that’d be cool.

Full props for choice of location (Lake Pedder!) Owing to the fact that Lake Pedder is situated in the Tasmanian Wilderness World Heritage Area, how is the festival addressing its environmental footprint?

We’ve developed a waste management plan with composting, recycling and reusable eco cups from from one of our sponsors One Green Cup. Not using a single plastic cup for every drink really cuts down on our waste. We’re making a conscious effort to reduce our footprint. We’re giving our patrons the option to reduce theirs too. They can catch our Rose Quartz bus to the festival, leaving from the airport with a pick up stop in the city. It’s a multi-sensory curated experience. Think of a unique mix of informative tour guides complete with history lessons, site info and flora & fauna facts. 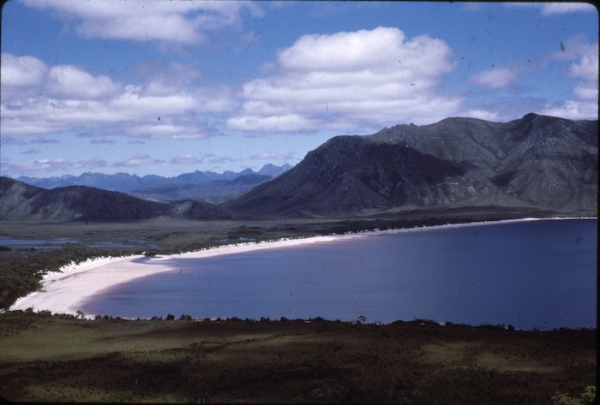 In the last few years, Tasmania has seen its fair share of festivals (Mofo/Dark Mofo, a festival called PANAMA) popping up around the island. Do you think this is a result of the widely acknowledged ‘MONA effect’?

The ‘MONA effect’ is definitely responsible for a boom in events in Tasmania. MONA has been so significant in shaping the arts and culture of Tasmania, so it’s no surprise that there are new events popping up. It seems to have had a lot to do with the significant shift of the generalised national perception of Tasmania as a place with a small gene pool and home of young Einstein. Along with MONA perhaps the perceptions began to shift as people started to value the incredibly unique and wild natural elements that Tasmania has in abundance.

Tasmania is a pretty incredible place and we think it always has been, even before the ‘effect’. From the nature to the food, the environments and the atmosphere, Tasmania has something about it that allures people, we want to share that.

Yeah, Tassie rules! If I could build on my last point; many of these new festivals seem to prefer the small-scale, boutique approach. Could this be a counter movement to the mainstream Australian festivals becoming too large?

We love the notion of intimate boutique festivals. Having the ability to keep things tight means we can create a great community at Rose Quartz Festival and make the event really memorable for those who are there. We’re talking bumping into the same people, dancing with the people you’re camping next to, and sharing a spritz front of stage. We’re really excited about Rose Quartz and how the site and our curated lineup already make for a pretty wild weekend. Adding only 500 tickets into the mix means that the whole experience is really intimate and thrives on community. Smaller numbers allow for freedom and more experimentation... further out into bizarro ether.

The impact [WA-based festival] Camp Doogs has had in creating such a positive communal environment has been a big inspiration for us.

The commercial pressures that are faced in providing spaces for people to dance and enjoy themselves end up dictating so much of the experience... the festival ends up becoming just another way to get munted and shunted about.

“A club can exist with camaraderie, with love, with harmony. It doesn’t have to be a pushy distasteful thing, which a lot of clubs are these days. Clubs can be very harmonious, and it starts at the staff, and then it comes down to the patrons.” - Nicky Siaono

One of the aspects of the ‘experience’ we’re hoping to achieve (and working hard on) is the arts perspective of Rose Quartz. I’m working closely with Brigitte who has experience in commercial and artist-run galleries. Together we’re drawing up our dream artist team, curating emerging artists who excite and inspire us, while remaining true to what Rose Quartz is all about. I guess here, I provide my experience in events and Brigitte tailors this to her knowledge of experiential art and how community engages with art. We’re working together to make Rose Quartz intimate and special, extended by our curating of the artist lineup and how we wish our Rose Quartz visitors to feel/think.

As some may know, Lake Pedder is shrouded in some controversy following its artificial flooding to create dams in the early 1970s? Will Rose Quartz pay tribute to these events?

Lake Pedder is a pretty inspiring site and we’re really inspired by its history in forming our festival. The name Rose Quartz comes from the appearance of the initial site, before it was flooded so we’re definitely playing homage to the idea of the original site. Upon forming the festival, we’ve looked into the archives and have been influenced by Olegas Truchanas photography and investigations of the site. The festival will naturally provoke reflection on the controversy of Lake Pedder, but our intention is to focus on the environment as it was, and as it is, a beautiful place with a deep history and a celebration of the natural wonder of the Tasmanian wilderness.

This is your first time curating a festival (rookie!). Apart from the tonnes of hard work, I like the idea of being able to draw on your past festival experiences in order to create an atmosphere that will leave a lasting impression on people. Have you done this in some form?

Our team is built on an experience of events and media. Across the team we have some pretty good experience in curating events. I run the Tanz Hazey Daze parties in Hobart, Paul runs Ring Ring in Launceston and Finn runs Sub Theory in Hobart as well. Between all of us; the dance music scene in Tassie is hooning along. We’ve all been heading to festivals for a few years and collated the things we love with a focus on communal experience of the d-floor and a relaxed and positive build up to the party. To us, it's a really experimental and exciting lineup, a focus on visual arts and the environment for the festival. Tasmania is really important to each of the members involved in Rose Quartz, so we’ve made this a real feature of the festival providing an opportunity for others to really immerse themselves.

How are the nerves?

We’re doing well considering. We’ve got a great core team with skills in events and marketing. Now that we’ve launched our tickets we’re just planning all of the other stuff and tickets are going really well. We’re more excited than anything. We’re moving on to a lot of planning and we’re about to drop our second announcement that we’re really happy with. 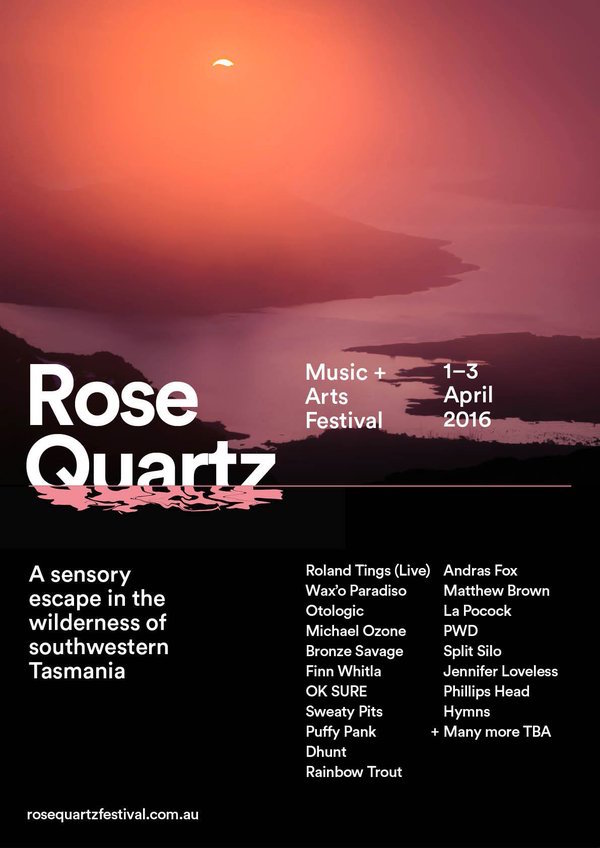 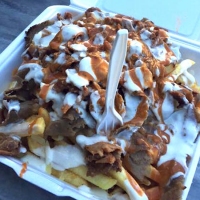 Catching up with our brothers and sisters of the Halal Snack Pack Appreciation SocietyPromoting a shared love of meat, chips and acceptance. 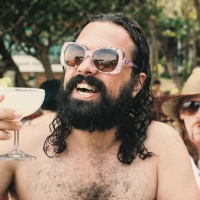