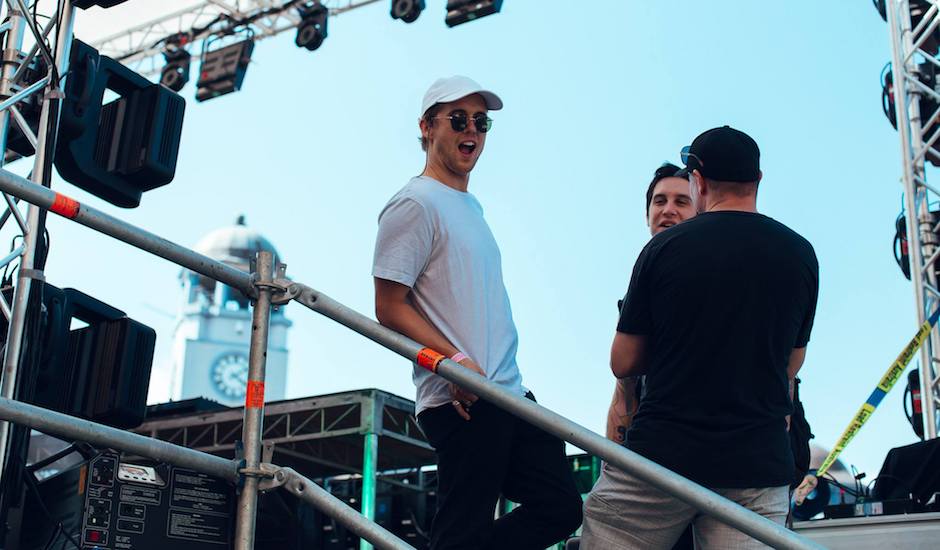 Five years ago, Audiopaxx entered Australia’s electronic music scene, and quite quickly established itself as one of the country's leading management/touring companies - looking after and/or touring artists like L D R U, Elk Road, Yahtzel, Akouo and heaps more. If you read our site at all you'll recognise most of 'em because we spend a lot of time talking about them as some of the cream of the Aussie electronic crop.

And with an already tight af legacy behind them, there's plenty to celebrate, and they're doing just that on August 25 at Home The Venue in Sydney with basically all the talent that makes up their esteemed roster. To mark the ocassion, we had a chat with bossman Dominic Furber to look back on Audiopaxx's humble beginnings throwing boat parties, to now looking after Grammy Award-nominated artists. Check it out below, and get more info/tickets for their birthday party HERE.

Happy Farkin’ Birthday, mate. Five years, that’s almost half a decade - a long time. But I wanna start at the beginning – how and why did Audiopaxx start?

In 2010 I was doing some festival promotion for We Love Sounds selling tickets for commission, and something just clicked for me. I decided my travel plans could wait so a friend and I planned to do a 200-boat party [Ship Faced Cruise], which led to me realizing I needed an ABN to book some DJs and actually run this, and that the whole thing was going to be a lot more than just charging entry and partying. This resulted in the birth of an event company called Ghettoblasted and being a young bogan, I realised after doing one event this is the worst name in the history of names…

So I came up with Audiopaxx. We started running boat parties that grew to 1000 people, with five events per year and from there I decided I wanted to learn more about the event business, enrolling in my advance diploma of events. In 2012, I met my business partners Hadi and Ignacio from Swerve Productions. We started a joint venture with Swerve and Audiopaxx becoming a domestic booking/international touring company. I knew that my passion was Artist Management, but I knew I needed to have experience in all other key areas such as events and touring before holding someone else’s career in your hands…

Fast-forward a couple of years and some broken hearts later, I found my first two clients: L D R U and Yahtzel.

From those humble beginnings, many good things have come – can you rattle off a few highlights for us?

Too many exciting moments to list, but there are few that are more poignant than others. On the management front, top highlights have been our artists being recognised for their talent from our first gold record with Carmada – Maybe; our first platinum record with L D R U – Keeping Score; Lipless’ Grammy nomination, five entries in the Hottest 100 (getting up to #21), hundreds of millions of streams, sell out shows and playing the biggest festivals in the world.

On the touring front developing an amazing troupe of agents who tour some of the biggest acts in the world from Claude VonStroke to Zeds Dead, Getter to Noir and many more.

Do you remember any specific moment in your Audiopaxx time and thought, “holy shit, we’re onto something here”?

I think before Carmada when we were toying with the idea, we did an L D R U & Yahtzel original via Future Classic. The first tour I did with Big Chocolate in 2012 was also another crazy moment, as I was just a 22-year-old kid trying to work with Depart of Immigration on visas.

Name and shame: Which of your artist roster is the biggest Madonna on tour?

As I sit here looking at the roster and thinking who's the biggest diva, I can't help but throw our General Manager Tom under the bus. The guy is one of those annoying health freaks; he's harder to please than a vegetarian on Tinder, who you're trying to take out for dinner. The guy lives of chicken and kale and refuses to go to dinner with promoters if its junk food. I've heard he makes the guys wake up an hour earlier than they have to, just to get a Paleo breakfast or whatever diet he's heard about from the latest Joe Rogan podcast.

There have also been some questionable snapchats of him dancing to Madonna.

You guys have Your Paradise coming up, how’s the 2017 edition shaping up?

Yeah, this is definitely one of our proudest achievements. We came up with this farfetched idea to get us into the Australian festival market, without doing the same thing in a saturated game and have somehow managed to pull this logistical nightmare off. 2017 is 20 packages off selling out for our fourth year in a row, and we haven’t even announced our special guests yet. We’re super thankful for the support for Your Paradise – it’s been phenomenal. We’re looking into other unique locations around the globe where we can get artists and punters to connect in ways they never have…

You’ve got a Corporate Division in the pipeline - can you tell us a bit about it?

One of our partners who has years of experience working hand in hand with corporates and is a true gun has second-to-none relationships with leading global corporations. For years Audiopaxx have been working with brands including Microsoft and Red Bull, booking talent and working on unique corporate activations. We decided now is the right time to officially launch this and give it the attention and exposure it deserves.

Your 5th Birthday party is coming up on August 25 with a pretty schmick lineup, how loose is it gonna be on a scale of one to Drew on Day 3 of Splendour are we talking?

Bro, it is going to be seriously loose, but unsure if we’re quite talking that loose.

Drew Day 3 Splendour is something of truly Biblical proportions and unfortunately we’re not going full Drew-eyed given the current state of Sydney clubs. This would not be responsible service of alcohol, which of course we promote. Almost as if someone who hates fun would shut us down if we didn’t. 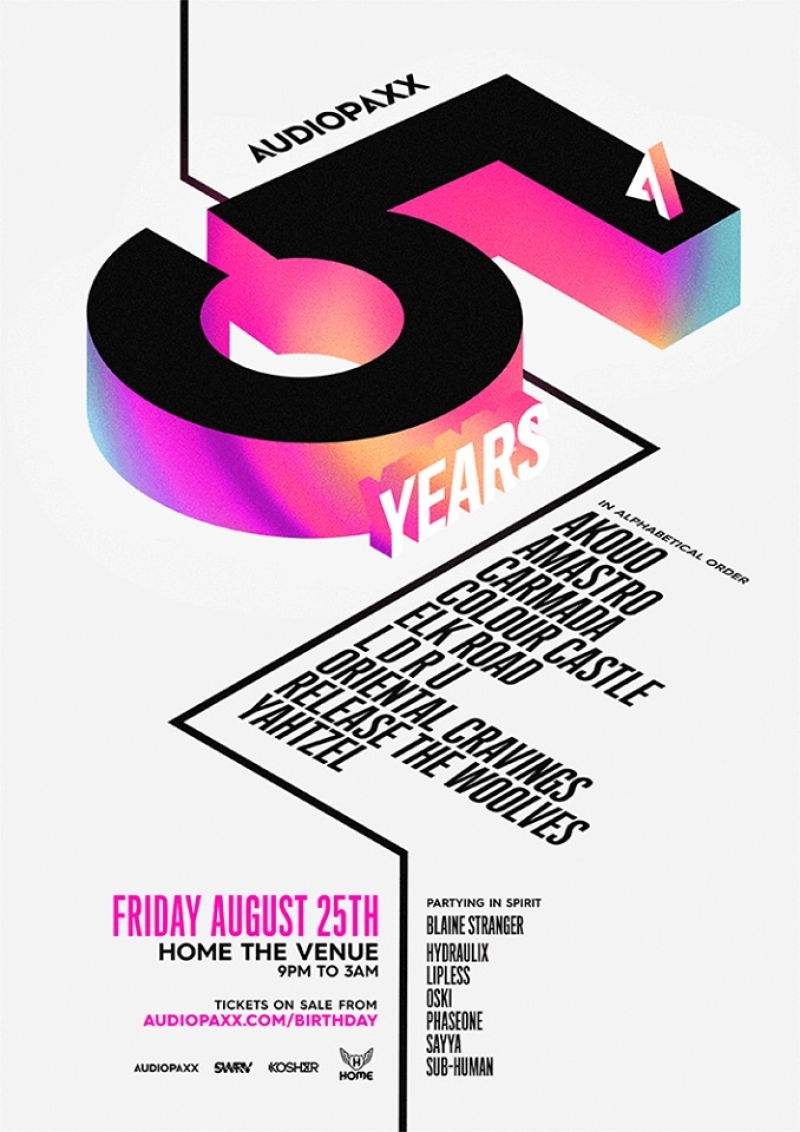 Besides Your Paradise, what’s on the cards for the rest of 2017?

Lots of music!! LDRU just dropped his debut nine-track Sizzlar Mixtape; we have a Carmada collaboration with NGHTMRE about to drop via Mad Decent followed by their second highly anticipated EP (no, they didn’t break up); Yahtzel has a new single coming via ODESZA’s Foreign Family Collective followed by an EP and tour. Elk Road has a single with Julia Stone, Akouo has an LP. A new act we’re developing, Release The Woolves, just had their debut single Shotgun go to #1 on Spotify Viral charts and they are supporting Borgore on his upcoming tour.

On the external management front, Alex's artists Oski, Hydraulix and PhaseOne are gaining huge traction in the US and are collaborating with the biggest names in bass music. Eli's artist Lipless is working full-time with Kaskade following their Grammy nomination, and Colour Castle has collabs with Doorly and Miguel Campbell coming after longest running ARIA Club #1s. Stacey's artist Amastro has been going from strength to strength, and Helena just signed Perth natives Oriental Cravings. We also just signed Perth-natives Oriental Cravings, who are getting huge support from RL Grime too.

We’re also in the midst of launching our US offices and bringing on board some more external managers and agents whilst continuing to develop our global relationships with managers, artists, agents and record labels. 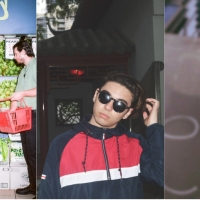 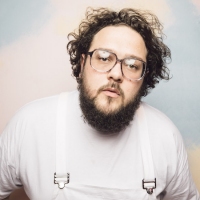 Joyride Sent Us A Playlist Of His 10 Fave Sydney ArtistsHe's got some live dates coming up very soon.
Light & Easy