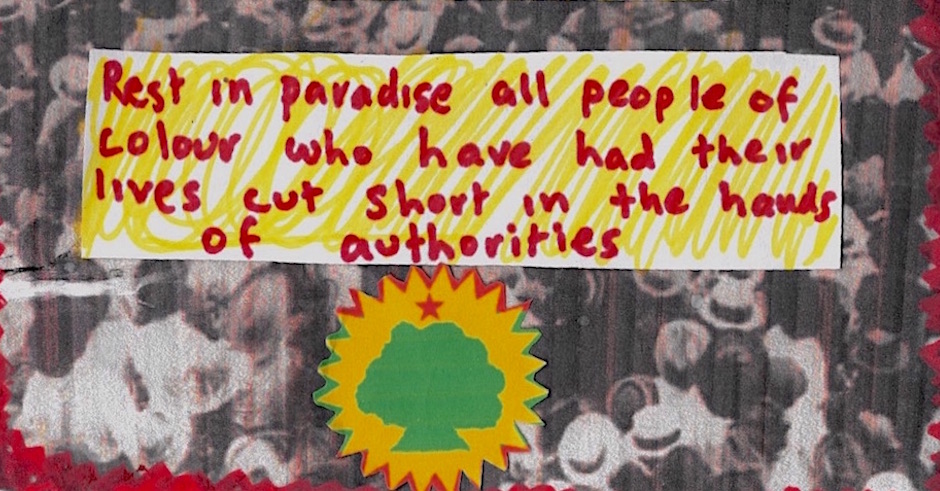 On July 5, 2016, in the North American state of Louisana, a 37 year old African-American man named Alton Sterling was shot and killed by Police. Video footage of the incident showed Sterling being pinned to the ground by Police Officers, before being shot at point blank range multiple times, ending his life. Though shocking, and tragic, the incident itself came as no real surprise to Americans, or even further beyond. After all, Sterling’s untimely and unnecessary death was just another in a long line of deaths at the hands of Police in America, the predominant number of deaths being attributed, of course, to members of the African American community. Indeed, in the four year span beginning at the start of 2012 and ending at the conclusion of 2015, a total of 1,958 reported deaths occurred at the hands of law enforcement. Of that number, such notorious incidents such as the shooting death of 18 year old Michael Brown (2014, in Ferguson, Missouri), the choking death of Eric Garner (2014, Staten Island, New York) and the suspicious death of 25 five year old Freddie Gray while in the custody of Police (2015, Baltimore, Maryland).

The history of deaths and prejudice suffered by the African-American community, most noticeably at the hands of law enforcement officers, has prompted US citizens (and countless supporters abroad) to protest at length under the banner, and for the cause, of #BlackLivesMatter. Tragically, however unsurprisingly, America had not even had a chance to process the shooting death of Alton Sterling before another incident occurred to further demonstrate the urgency of African-American suffering at the hands of Police and prejudice. Exactly one day later, video footage emerged of the fatal shooting of Philando Castile in the state of Minnesota. Castile’s girlfriend Diamond Reynolds captured the aftermath of the shooting for Facebook live, footage in which Castile can be seen bleeding from what would be a fatal wound, while Reynolds’ own four year old daughter cries in the backseat of the car. Pulled over for a broken taillight, Castile was reportedly shot up to five times after openly telling Police officers he had a licensed, and registered, weapon in the car, before attempting to comply with officers’ demands and retrieve his license and registration.

The frustration and mourning spilled over only one day after Castile’s death, in the shooting of five Police officers in Dallas by a lone gunman, as all five oversaw a peaceful Black Lives Matter protest. In light of these incidents, three of so many, the governments of multiple countries around the world issued travel warnings in which they suggested caution when travelling to the United States, citing racial tensions as the reason. Meanwhile, for certainly not the first time and tragically unlikely to be the last, the United States of America and its community of African-Americans were forced to deal with the aftermath of further unjust deaths at the hands of Police officers. And, at such a time when Donald Trump is the Republican candidate for the US Presidency, so too does the same community stare down the barrel of a growing prejudice against them. Further than that, the nation as a whole must come to terms with the growing situation around them. As US President Barack Obama said, "When incidents like this occur, there's a big chunk of our citizenry that feels as if, because of the color of their skin, they are not being treated the same, and that hurts, and that should trouble all of us. This is not just a black issue, not just a Hispanic issue. This is an American issue that we all should care about."

Ever a voice of the people, and perhaps most particularly African-American people, the hip hop community has risen up to speak on behalf of the deceased, as well as the terrified and angry masses in mourning over their deaths. Beyonce, for example, posted an extensive response to her personal website in which she implores people to join her in taking action for change, before offering a similarly emotive statement to her Instagram. Notably, Beyonce also offered her sympathies and condolences for the police officers who lost their lives in Dallas, highlighting the need to fight against tensions and violence further escalating in another Instagram offering from the hugely popular artist: 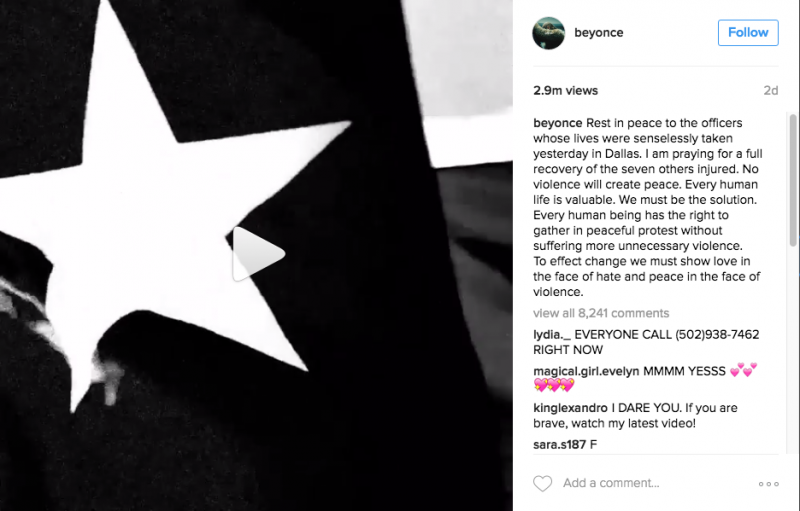 Beyonce’s own equally famous husband Jay-Z broke a three year streak without a solo release to drop a new song addressing the Black Lives Matter movement, with spiritual releasing on the rapper’s Tidal streaming service, and supported by a tweet posted to the Tidal twitter page, in which Jay-Z references the death of Michael Brown almost two years earlier and states “I’m hurt that I knew his death wouldn’t be the last.” Rapping “just a boy from the hood that, got my hands in the air, in despair, don’t shoot”, Jay-Z aims to stand and speak up for himself and his community, expressing both sympathies and a profound understanding.

Days later, the horror of the latest deaths at the hand of police brutality still clearly in his mind, Jay-Z took to Tidal again with a curated playlist titled ‘Songs for Survival’. Containing such artists as Nina Simone, Marvin Gaye, Gil-Scott Heron, Beyonce and Kanye West, among others, as well as being headed by a picture of infamous civil rights icons Malcolm X and Martin Luther King Jr, the curated playlist is intended as yet another response to the injustices suffered by the African-American community. Indeed, the inclusion of the aforementioned Malcolm X and Martin Luther King Jr is a deliberate one, as both men lost their lives amidst extraordinary racial tensions and prevailing prejudice, and Jay-Z would seem to use their image in attempts to signify that recent events indicate a return of such turmoil and urgency to American culture.

Hip hop super producer Mike Dean also released his own statement, joining forces with Z-Ro for a more aggressive, yet equally passionate and heartfelt, single release in response to the events unfolding around him.

Talented R&B crooner Miguel was yet another to add his voice to the response, putting together a new track in the early hours of the morning, speaking on his inability to sleep with his grief over the deaths. With such lines as “I’m tired of seeing innocent lives turned into hashtags”, the profundity of both the situation and the responses to it are further compounded and dramatised, insisting both the urgency and seriousness of the developing tensions in America. Only a short time afterwards, footage emerged of Miguel performing at London’s Wireless Festival and breaking down live on stage while offering a heartfelt statement, responding to the tragedies.

Perhaps most confronting, rapper Killer Mike, one half of Run The Jewels, spoke in an interview with Hot 107.9 and offered in his statement, “I’m afraid I will be murdered.” Further, Killer Mike implored American citizens to take action, and protest corporations, big business and banks, as a means to force action and change in the nation. Representing the fear, the anger and the frustration of countless people, Killer Mike continues for 25 minutes in a heated offering.

For all that can be said, however, of what the tragic deaths mean to America specifically, it is equally true that prejudice and racial tensions are also a world issue. While so many may look on at the developments in the United States, and condemn the country for their specific tensions and unrest, the truth is that countries the world over still persist with racial injustices. Stormzy, a grime MC from the UK, highlighted this fact for himself in an open letter posted to his Facebook.

Indeed, up and coming Melbourne hip hop talent Baro joined forces with fellow Australian hip hop artist Remi for a pained response of his own - releasing the brilliant Fuck the Judge to his Soundcloud. Though inarguably a somewhat instinctual response to the events having unfolded in America, the track expands further to detail both artists speaking on their own experiences of racial prejudice and police prejudice here in Australia, creating a crucial and important parallel between the events in America and our own lives and environment here Down Under.

Therein, of course, the truth becomes visible, in the sense that all that is unfolding in America, with regards to police brutality and racial injustice, is as much a world issue as anything else. It is, as should go without saying, a human issue. The ‘Black Lives Matter’ movement is one that should strike a chord within all empathic individuals, all cultured human beings, all lovers and hopers. Perhaps particularly members of the hip hop community, as fans, listeners or artists, since the origins of hip hop as a form of protest expression for downtrodden and unjustly treated people of colour is impossible to deny.

This beautiful genre of music, and modern incarnation of storied art-forms of poetry and prose, owes entirely to the African-American community. Therefore, the deaths of Alton Sterling and Philando Castile should be felt by all people of sound mind, as before them the deaths of Michael Brown, Eric Garner, Freddie Gray, and countless others, should have done, and do, the very same. While you may look on, or listen in, and think this may not be your issue - the truth remains that it is your issue.

Black Lives Matter. You matter. We matter. Encourage change. Now we must grieve for the ones we have lost, and fight for all of those who still remain. And when we do grieve, we now know that we will not grieve alone. 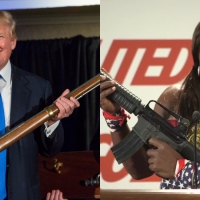 Idiocracy 2016When dumb people are given a bigger microphone, they use it to spread fear, hatred, bigotry and uninformed decisions. 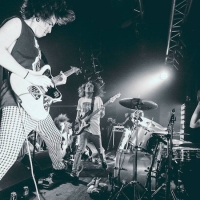 The (Over-Polished) Sound Of MusicMissing the days of recording fuck-ups and real instrumentation.
D & M