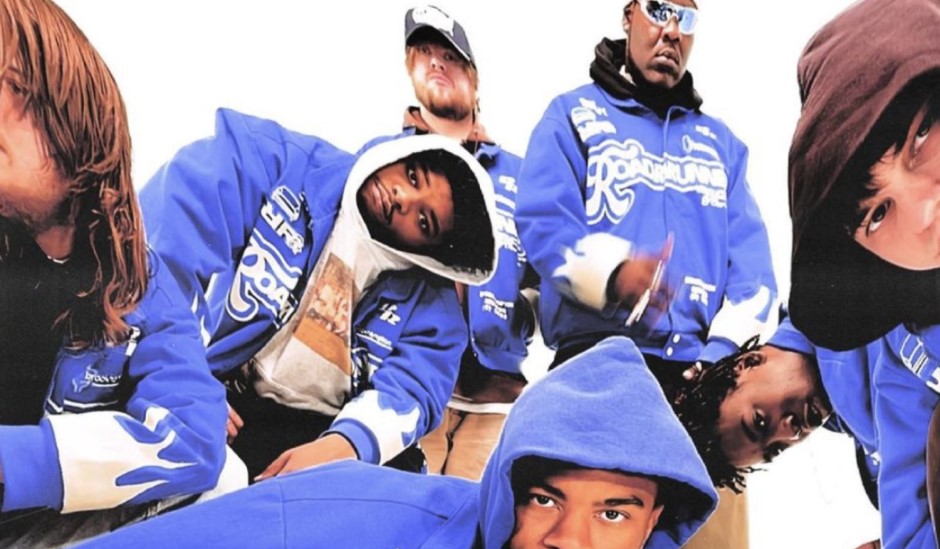 Today marks the arrival of BROCKHAMPTON's new album ROADRUNNER, an electrifying return from the hip-hop collective that welcomes their first official record since 2019's chart-dominating GINGER. It's been a long time coming from the crew too, teased through their TECHNICAL DIFFICULTIES series - a run of loose singles dropped over the pandemic, most of which taken down from YouTube and Soundcloud a few days after being uploaded - and trailers that welcomed acts like Rick Rubin and RZA into the BROCKHAMPTON camp for behind-the-scenes looks.

You'd be glad to know, then, that the album holds up. ROADRUNNER features BROCKHAMPTON at a newfound peak, cutting out all the dead weight that often occupies blockbuster hip-hop albums in order to create a concise and focused 13 tracks that each represents the BROCKHAMPTON vision and its multi-faceted glory, from the more energetic and rushing pace of their sound right through to the more gospel and soulful-tuned work they emphasised amongst much of GINGER.

As always, ROADRUNNER is a complex album with a lot of small things worth paying attention to (or small things you're probably trying to seek out if you're a bit of a BROCKHAMPTON know-it-all, which it seems like you have to be if you're a fan of the group in any way.

So, without further ado, take a dive into ROADRUNNER below, alongside our ultimate guide to everything you need to know about the album:

How many tracks does it have? Is the physical version different?

ROADRUNNER: NEW LIGHT, NEW MACHINE has 13 tracks on its streaming addition, including some hefty collaborations we'll get to in a minute. Included within that is the previously-shared lead single BUZZCUT - which sees BROCKHAMPTON unite with Danny Brown - and COUNT ON ME, which came out last week.

What BROCKHAMPTON members are most prevalent on ROADRUNNER?

BROCKHAMPTON stans have a habit of breaking down every album they've made and making fancy statistics about which members are featured on which albums, and while ROADRUNNER isn't even out internationally yet, a couple of clued-in folks have already broken down those stats for the new one.

On the 13 songs that come with ROADRUNNER's streaming version, Kevin and Joba are on the most - nine of the 13 tracks feature the pair - followed by Matt (8), Jabari (5), Merlyn (4), Bearface (3) and Dom (3). The Jabari Manwa inclusion is particularly cool, considering he's been a long-time producer behind-the-scenes of BROCKHAMPTON's records, now stepping out into a more vocalist-like role on ROADRUNNER.

Meanwhile, RIP to anyone longing for Bearface and Dom prevalence - their verses are long when they happen, but yeah, they're definitely few and far between.

Who are the guest features on ROADRUNNER?

Clocking guest features can be one of the most exciting parts of a hip-hop album release, but until recently, 99% of the music BROCKHAMPTON have released has been within the group itself, not enlisting any extra members outside of the initial group. On ROADRUNNER, however, things change; the final result being a pretty guest-heavy album from a band that's so long stuck within their core group.

There's Danny Brown on BUZZCUT of course, as well as JPEGMAFIA on CHAIN ON, A$AP Rocky and A$AP Ferg on the long-anticipated BANKROLL, SoGone SoFlexy - a Corpus Christi newcomer signed to Kevin Abstract and Romil Hemnani's label, Video Store - on WINDOWS, hip-hop heavyweight Charlie Wilson on I'LL TAKE YOU ON, Baird on OLD NEWS, and a couple of sneaky, uncredited voices here and there that long-time BROCKHAMPTON fans can probably spot - take Ryan Beatty for example. 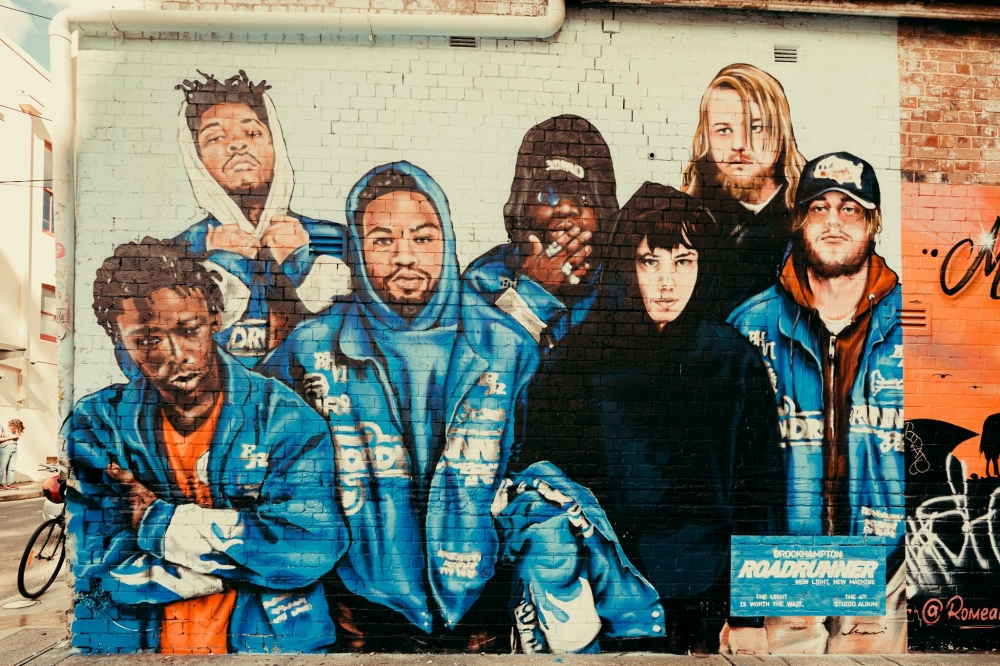 The BROCKHAMPTON mural unveiled in Australia this morning. Photo by Jared Leibowitz.

If I liked the SATURATION trilogy, am I going to like this? What if I preferred GINGER?

BROCKHAMPTON fans have long asked for the group to return to the sense of manic urgency that occupied their breakthrough SATURATION trilogy, even if the albums since have showed a continued sense of evolution and growth that's integral to the group's survival. Nevertheless, the same conversations are happening around ROADRUNNER, especially considering BUZZCUT seemed to feel like a bit of a throwback to their heavier sounds a few years back.

Yes, ROADRUNNER is a little heavier than GINGER and even much of iridescence, but it's not an album of straight bangers. ROADRUNNER includes some of BROCKHAMPTON's most thoughtful and intimate work yet (especially Dom's processing of loss and mental health on THE LIGHT and THE LIGHT PT II), with both sides weighed pretty equally amongst ROADRUNNER. That's a good thing though, as it gives an opportunity to see how the more energetic side of BROCKHAMPTON has grown in the last few years, and while still including some newer sounds that shows potential paths for the future.

Nevertheless, Kevin Abstract wants the record treated as its own entity, separated from everything else BROCKHAMPTON have released so far: "please go into it only expecting to hear our newest album and not our previous 5," he wrote on Twitter.

What was the thing being teased for Australian fans?

A couple of clued-in BROCKHAMPTON fans down under clocked that the group and their label were teasing something for ROADRUNNER's release down here, and yes, it wasn't all for nothing. Fans who had pre-ordered the album in Sydney were sent coordinates to a mural on Mary Street in Newtown, painted by local artist Inari (viewable above). You could also scan a QR code that will take you into the album's artwork as well, which you can now play around with on their website.

Are they doing any live shows soon to celebrate?

While Australia's COVID situation means that a run of BROCKHAMPTON shows could probably happen down here alongside the album's release (much like when they played Listen Out Festival the same week as dropping iridescence), it's still probably a while away. Never fear though, because the group are celebrating the album's launch with a show at Rick Rubin's famed Shangri-La Studios, which will be livestreamed across the world on April 10th. You can get tickets to it here.

Is it actually BROCKHAMPTON's final album?

Earlier this year, Kevin Abstract posted on Twitter that the two albums the band were planning on releasing this year would be the last for BROCKHAMPTON. That means that there's one planned for after ROADRUNNER, at least according to Kevin's tweets. But really, who knows at this point? 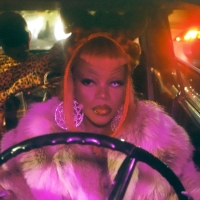 With her new single Syrup, Tkay Maidza continues to be unstoppableTime and time again, the South Australian-raised rapper has proved why she's worthy of being Australia's next break-out act. 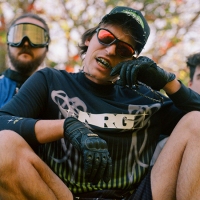 Meet Behind You, who make genre-less, Death Grips-like punk-rap with BurningThe Sydney experimentalists have become ones to watch over the last few years, something their new single cements in stone.
Rap / R&B