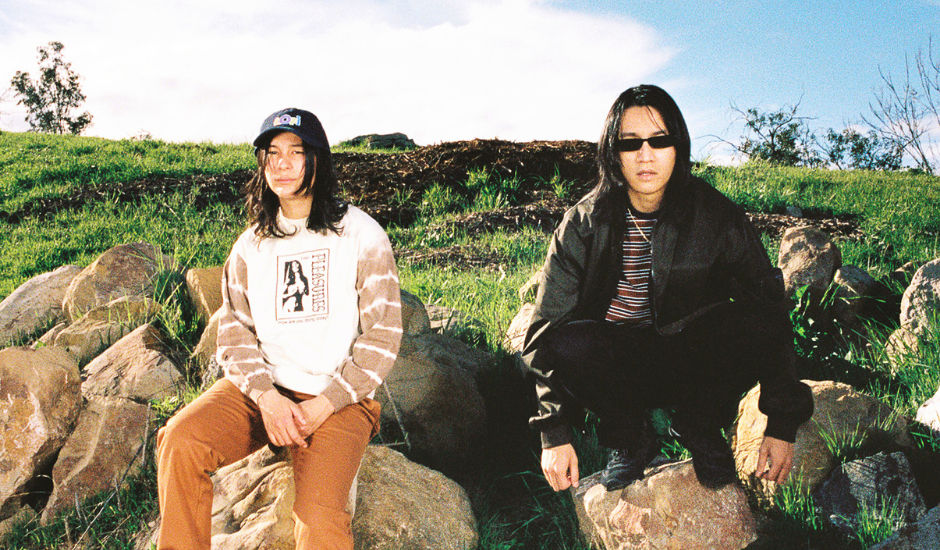 Dreamy bedroom pop duo The Simps is a project from LA based songwriters, multi-instrumentalists and producers Eyedress and zzzahara, who have combined forces to present their debut 14-track album Siblings.

Both artists are musicians in their separate realms, Eyedress seeing his track Jealous peak at #10 on TikTok’s Top Alternative Rock Tracks of 2021, and is set to perform at Coachella, while the up and coming zzzahara working on a debut solo album set for release later this year. The Simps sees the duo combining their talents to co-write this release, Eyedress explaining that  "I feel like when we work together, we’re just making the styles of music that we’re a fan of, and because we’re into the same shit, we just end up making something totally new.”

The album captures this sentiment, with moments of retro nostalgia coming from the synthesizers and beats, jangly guitars drawing from indie-garage-rock and psychedelia to craft a release rich in soundscapes, while dulcet mellow vocals to top it all off.

Released yesterday (Feb 14) via Lex Records, zzzahara explains the album is about “love, relationships, and heartbreak.” Just in time for Valentine's Day.

Get intimate with the tracklisting, and get personal with The Simps as they walk you through Siblings below.

Dilated pupils and an invitation to Coachella 2019 with Mac DeMarco. The summer felt like a fever dream. A new brand of potent ecstasy that was pressed as the Tesla logo had just launched and it felt like bliss. One of the happiest years of my life. We made this track in Idris’s small room in Silverlake. We both kept cracking up at the sinister guitar lines we were coming up with for the track. I freestyled the lyrics and it was history.

We made this number at Future Classic studios on a rainy night. I think me and Idris have a good selection of music that we have in common and have been making music long enough to laugh at people when they compare our songs to other artists’s songs. It’s usually like “omg sick track! It sounds like this…or this.” Hence Idris’s opening lyrics, “Everyone’s a critic.” We both have a love for post-punk and dark wave so naturally we just hopped on this track and vented our frustrations on other people’s opinions.

Fresh out of a 5 year relationship and being forced to drop out of my master’s degree program was probably one of the hardest situations I had to ever face. I went through a heavy party phase after all of that and started dating again. I started going out with an exotic dancer and was fixated for a moment. She had these sparkling green eyes that had me stuck in a trance. Life was happening pretty fast. I think me and Idris were pretty high and he played those ear piercing chords and I just started singing “Greeeen Eyed Girl.” It just stuck and I was stuck simping on this girl with her green eyes. Idris really went in on that lead guitar line too. I remember just smiling hard watching him rip at the track.

I was bummed and wanted to win back a girl I had been seeing on / off all year. Idris knew the situation and could tell how depressed I was. He said, “Just write about it dude.” We went back and forth with guitar lines. We were at Future classic studios and again the weather was gloomy, it was cold as hell! I feel like feelings hurt more when it’s cold outside. Idris got on the synth to play that flute-ish synth line and it definitely lifted up the track to a more post - punk dance vibe. All the lyrics came straight from the heart at the time. “I’m sorry that our lives are different. I wish I met you at a good time cause I want you in my life for a long time. Melissa.” It was me coming to terms with lives being completely different and not meant for each other; being friends means so much more than a romantic relationship.

My favourite song on the album hands down. Me and Idris were chilling in his room, smoking, and making music. I played those chords and he picked up the bass. The bass line on this track smacks differently, it’s so phat! At the time, I really wanted to make it official with a girl that I had been simping over, but she had made it clear that she wanted our relationship to be casual. “She said she likes me, but she’s not ready. We’ve been going, going steady.” I could not wrap my head around the fact that we had a good thing but she still wanted to date other people. “I’m scared that my feelings would be watered down, if I saw other people when you weren’t around. I just wanna see you. I just wanna see you and only you.” Her casual dating, meant me having to try and put myself out there to casually date, but I was too scared to do that with the hopes that it may ruin how I feel about her. I was feeling very heavy.

There are two studio rooms at Future Classic, studio A and studio B. I remember we gravitated more towards studio A, because it had a Juno-60 synth inside. This was the first track we made in the studio with the Juno-60 synth, which we used a couple of times for the record. I think we were just nerding out because of how expensive and iconic the synth is. Being able to use one felt like a major privilege at the time. Idris put on a beat and started playing the chords to “Hold me Down.” I grabbed the mic and started with a RnB type melody. The track felt like a Drake song to me. It felt good, emotional, sad, and sort of dancey. It was mesmerising. Idris sang on it with his high vocals and it really popped. Such a beautiful track.

Life was feeling good at the moment, we were getting more shows, going out to other shows, parties, and just enjoying our youth. I think I had just introduced Idris to Elvia and he was happy as a clam. I had never really drank wine before and an older girl that I was dating at the time had introduced me to red wine. We were total simps. Despite working at a juice bar and living in a shed…I felt like I was doing well for once in my life despite my circumstances. “I’m on fire for the first time!” I picked up the bass and I remember Idris saying “oh damn you gonna start with a bass line first? Let’s work backwards!” He put on a fast - paced beat and I played a bass line. We looped it. I got on the mic and yelled “I’m on fire for the first time!!! I’m on fire it’s been a long time!.....And I’m sippin on this red wine!” This track is such a great vibe. I still get butterflies in my stomach when I listen to it. It’s just a great memory marker to me. Idris added his verse a year or so later and the track culminated into one of our biggest songs together.

The title of the track really speaks for itself. I was dealing with heartbreak and financial hard times by numbing myself out. I lived in a 250 sq ft shed and would work 4:30 a.m shifts at my job from Monday to Friday, while recording this record. Life felt hectic so I disassociated through the painful parts. Mac DeMarco had gifted Idris a Roland JX-3P…the one he used to make “Chamber of Reflection.” There was a post - it note with the same settings he used to make Chamber of Reflection. We set the synth to that setting and I started playing a synth line over the beat. In the track I sing “Human Torture Chamber,” referencing Mac’s song, but alluding to the fact that I’m torturing myself by numbing myself out with opiates.

One of the first tracks we ever made together in my garage studio. Idris had just moved to LA and I invited him over. We instantly started making music together and he played a sick guitar riff over one of his beats. I just started freestyle over the music and that’s how that track was made. That’s how most of our tracks were made. Just freestyling.

I remember heading over to Idris’s first place in Culver City and him showing me a track that he had for several years. He passed me the mic and I just started laying down the melody. He was stoked because he said he wasn’t able to make anything particular with that track. It culminated to “Rainbow After Rain.” I sing, “The hurt it passed over, a rainbow after rain,” to signify that things do get better after a break up has commenced.

BERRY BOWL EVIL BOSS LEVEL
We made this track in Idris’s room in Culver City. I remember venting to him about how my boss treated me like shit at my job, “Berry Bowl.” She underpaid me and would yell at me all the time. It was hilarious. I sing, “Another weekend out oh yeah,” because that’s all I could ever think about to distract myself from where I spend most of my time…which was my job. I will always remember how relieving a Friday or Saturday night just felt.

Can’t help but laugh a little when I think of this track, because me and Idris were like this production sounds like a “Beach House,” song. We had fun with it. It’s a light hearted jam.

Magical synths were played in this song, Idris’s production on this track felt ethereal. I was in an early simp stage and let the feelings pour. This song had a Disney vibe and I think that’s why Idris chose to name it “Cinderalla’s Daughter”

The first track and music video we had ever released as “the Simps.” Idris put on a beat in my garage and I just riffed over it. He really liked what I was playing so we looped it. I picked up a budget Shure live mic and sang the opening lyrics, which became the chorus. “If time lost its meaning will I see you again?” We would play this track live and people would sing the lyrics back to us. It was awesome. The only time I ever got to really sing in the Eyedress live shows. It was nice to put something out into the world. I think this is the track where Idris joked around saying, “dude we’re Simps.” That’s how the name ended up sticking. 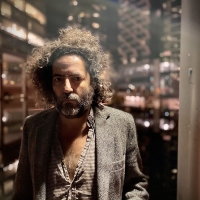 Listen: Destroyer - Eat the Wine, Drink the BreadAcclaimed indie-rock veteran returns with a new cut of house-influenced goodness ahead of thirteenth studio album 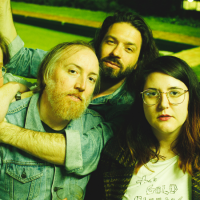 Premiere: The Mackerels - To The WaterThe Boorloo outfit showcase their harmonious capabilities in their latest indie-rock epic.
Bands