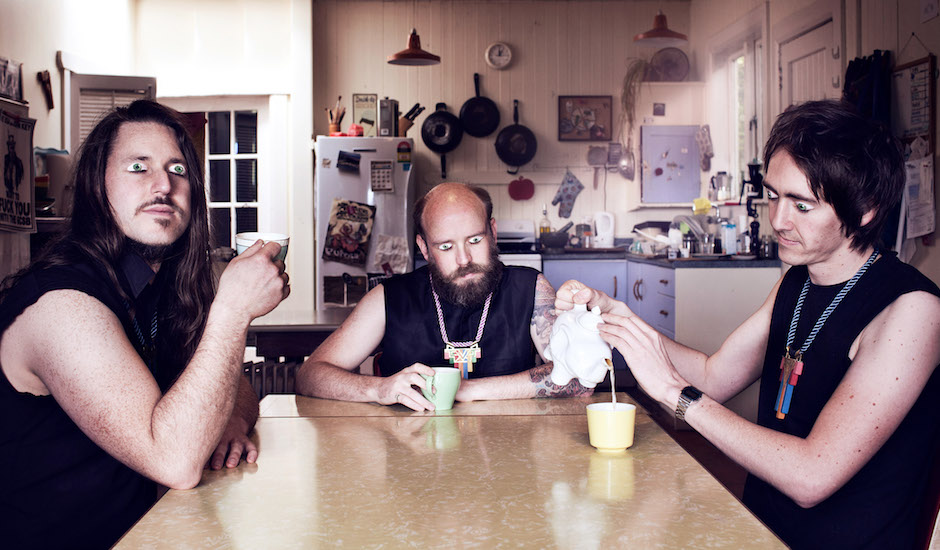 Wellington band The All Seeing Hand are here to fuck with your reality, and perhaps make you question your very existence on this planet we call earth on their fifth studio album, Syntax Error. Wtih rough, raw and intense blend of post-punk, electronica and rock, it's a 10-track journey into madness, one that ultimately has salvation on its mind.

With their album launch tearing apart the fabric of Melbourne's The Curtin this Friday 14 September, we sent 'em a few questions to find out more:

The All Seeing Hand are a power trio of electronics, drums and voice; from New Zealand they are dedicated to continuing the sonic exploration that runs deep there. New Zealand is a place with a deep-set parochial conservatism that drives the imaginative to new modes of cathartic expression. They’re known as a touring band and their live shows have become renowned for the transformative experience they provide; it is a full frequency sound that works the PA hard to create a whole body experience.

They exist in the continuing narrative of post-punk/electronic music. The All Seeing Hand feel the legacy left by pioneering New Zealand Band The Skeptics; are inspired by the eclectic drive of This Heat, and the taut interlocking of drums and electronics found in Death Grips. Their music comes from a place of sonic sculpture rather than harmonic play; the tight synchronised breath of the band as a whole gives the feeling that they are one entity, a machine/flesh hybrid, attempting to express many modes of existence.

As a band that plays live a lot, the stage is a great place to test ideas and see how they actually feel when expressed as a community experience. Sonics will be worked on in rehearsal, not until they are polished and complete, but until they have enough personality to try out on an audience. After a few times playing, the tunes become adolescent and assert themselves even more, and their journey towards being a complete tune starts in earnest. When they’ve grown up they can still recall juvenile memories with fondness, and can revert to those states with a new perspective.

All of the albums have been self-produced. They have been constructed for a home listening experience that transports the listener to the same emotional landscape as the live experience, while not being a facsimile.

Can you tell us about your new album, Syntax Error?

Syntax Error is the fifth album from The All Seeing Hand. It is an album reflecting the cognitive dissonance of this very real dystopian future that we are presently in; a time that is cracked as the code freezes in contradiction. The screens are jittering, the blocks of language losing meaning, the story of progress paused until the program changes and we can run again. We are living a Syntax Error.

The Program is broken.

The tracks on Syntax Error explore some of the contradictions that coexist in this complex moment, where seemingly all truths claim a capital T, and both the virtual and physical world are becoming a manifestation of a troubled mind. But with contradiction there is also hope, a striving for a new truth that recognises multiple voices; there is meditation, mediation, and reflection; there are communities navigating healing and growth. With ears open we can sing new songs to the vastness of the stars; we can transform our egos to embrace a future full of explorers of wonder and humility.

The album is being released in Melbourne at The Curtin on the 14th September.

The Planetarium in Wellington has bands play while the audience lie on the floor and stare up at the star dome. The projections take them on a tour around the known universe, orbiting planets, flying to distant galaxies, and watching the patterns that the grand movement of the cosmos makes. The All Seeing Hand have been invited to do one of these shows and are working on some new sounds to weave their songs into this contemplative space.

Bandcamp is the main place where we sell physical copies as well. Spotify and YouTube also work. 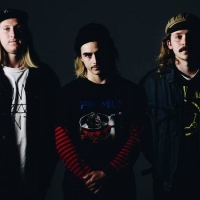 Meet "atomic-noise-surf-punkers" White Blanks, and their new single I Don't Wanna (Die)Fans of the Aussie surf-punk will find plenty to love with this Wollongong three-piece. 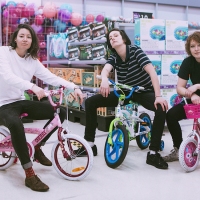 Say how ya garn to SCABZ, "just three gals from Newtown giving it a red hot go."They just dropped a new video for latest single Starting Line, and are joining Skegss on tour.
Bands