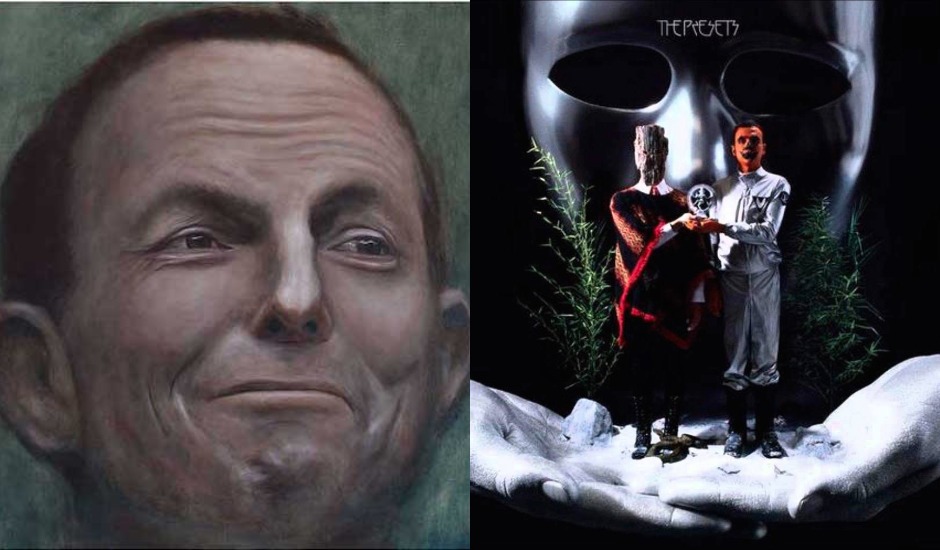 In the last election, 25% of young voters failed to enroll. That’s a shit-tonne of missing votes. Young people are three times as likely to have been to a protest or demonstration as opposed to someone older and 90,000 of you got up and managed to enrol before the closing date this year! We’re engaging with politics through social media only we seem to disassociate right before Election Day. Being bombarded with white noise campaign advertisements and snooze fest debates has surely contributed, so here’s some tracks to get you politically inspired about your decision before you draw a dick on your ballot paper and cast your vote. 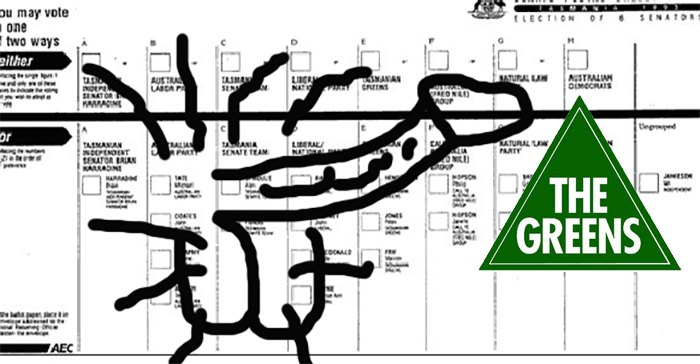 Midnight Oil is one of the country’s most successful political rock acts so they’re an important one to note. Beds Are Burning opened the floodgates for subsequent Aussie protest songs and lent a voice to the events that transpired during the Australian Bicentenary celebration. Following the passing of an act reducing native title rights for Indigenous people, 40,000 Indigenous and non-Indigenous protesters marched through Sydney on January 26, 1988.

There’s been very little improvement since then. Indigenous Australians still go unrecognised in the nation’s constitution and the government has stalled any attempt at closing the gap. Rates of employment have actually dropped 6.3% since 2008 and 27.3% of Indigenous Australians have experienced discrimination in the past year. The time for reconciliation is long overdue.

The Tampa Affair was a pivotal moment in Australian history and the lives of 438 asylum seekers stuck at sea hung in the balance of then-Prime Minister John Howard’s hands. The Tampa vessel was left for three days while the government scrambled to palm the problem off. Howard jumped on the climate of fear bandwagon post September 11 and introduced the Border Protection Bill less than a week later. The bill stripped asylum seekers of their human rights meaning boats could be turned away without consequence. Opinion polls sat at a favourable 77% following Howard’s controversial decision and the Liberals went on to win the election that year. 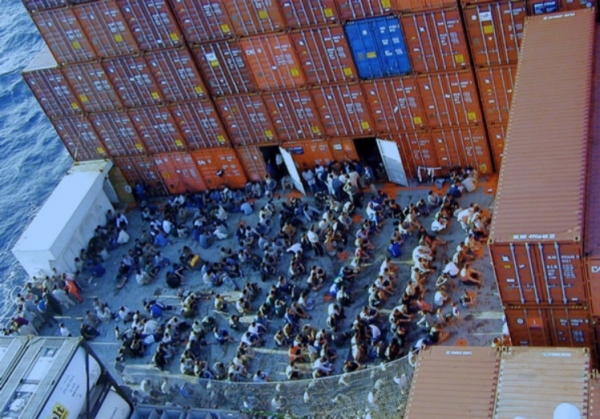 ^ The Tampa carrying 438 asylum seekers. 15 people were reported to be unconscious at one time due to extreme heat. Image via SBS.

Unfortunately, narrow-minded people will always live amongst us, regurgitating their hate-speech and misinterpretations of Mein Kampf all over the Internet. Sydney hip hop collective, The Herd, spells it out in 77%.

In case you’d forgotten this little gem, Melbourne four-piece The Smith Street Band stuck it to then Prime Minister Tony Abbott in 2015 over the abhorrent treatment of asylum seekers in detention, dedicating this specially-titled song and smearing Tone’s face all over the album cover. It all just confirms that man, we really hate Tony Abbott.

"Drowning refugees at sea/kiss babies screaming vote for me/I’ll take you to the future via the 1950s."

Operation Sovereign Borders is Abbott’s backwards baby and the praise he’s received from within his own party has him honestly believing it’s an impressive legacy. As of September 2015 there were close to 2,000 asylum seekers in offshore and community detention camps, around 500 of them children. Reports of child abuse, sexual assault, poor hygiene and lack of basic amenities in these camps have been rife. $2.9 billion could be saved each year, because on shore processing actually works out cheaper than detaining asylum seekers in suspended squalor. Violations of basic human rights and blowing precious tax dollars should hopefully get your blood boiling.

Killing-it-right-now, Courtney Barnett modestly delivers her environmental views in Dead Fox along with a dark and adorable music video. The most logical and cost-effective attempt at reducing carbon emissions was thwarted by Abbott as soon as his speedo-wearing toosh sat in the PM’s chair. Since the axing of the carbon tax, Australia has pledged to cut carbon emissions by a minuscule 28%. That’s over the next 34 years though, we’re in no rush. Fuck leaving behind a dystopian society, disheveled and plagued with environmental anarchy for our future generations.

The tranquil, honeyed sound of Melbourne singer/producer Banoffee surrenders all pre-conceived notions of women as the ‘weaker sex’ and instead celebrates women’s difference, ambitions and power in a society that decides otherwise.

"One puff of the chest and say that we're all fine/the tight rope it's just afraid I'll twine/We’ve lost touch."

What seems like a no brainer is now trickling insidiously into parliament addresses, and domestic violence rates are rising at a disturbing level. 78 women died at the hands of violent partners last year. The Liberals have pledged $100 million to advertising and ‘reshaping’ stereotypical views of women while simultaneously slashing funding for women’s refuge’s by 30%. This service will eventually be replaced with a hotline number. Unless some serious funding and support is provided, we could see 1 in 12 women turned away and forced back into abusive relationships with potentially fatal consequence.

Achieving marriage equality in this country has been made an unnecessarily painful process. 72% of Australians support marriage equality, it’s legal in 26 countries around the world and this decision has zero negative effect on anyone. Yet this is still a heavily debated topic in parliament, with both Labor and Liberal remaining neutral and diplomatic on the subject, and thanks to Senator Cory Bernardi’s mad witch hunt, we no longer have The Safe Schools Program because the dude is convinced there are direct links between the program and the adult sex industry.

"I got friends who need/Need the satisfaction of equality."

Sydney producer Elizabeth Rose urges us to accept and embrace the need for marriage equality in this stirring electro-inspired tune.

My People - The Presets

As relevant today if not more so than when it was released in 2008, the focus of My People is firmly on asylum seekers in Australian detention centres. "I wanted to write a song about...this horrible phenomenon where people come out here in search of a better life and we lock them up. I felt so horrible about the way we treat these destitute people that I wanted to write a desperate-sounding song – the line 'let me hear you scream if you're with me' could be understood to come from the perspective of someone who is locked up, needing to hear that there are people outside who are behind him and supporting him," said frontman Julian Hamilton of the song. And while you've probably munched more pingers to this song than spent minutes pondering its meaning, maybe go back to it now, and acknowledge one of Australia's biggest ever dance music releases is also one of its most politically powerful.

Down To Earth - Flight Facilities

Flight Facilities are no strangers to political commentary and they’ve lately joined in the fight against New South Wales Premier Mike Baird’s draconian lock out laws. It seems natural to pull a message from this cherished Flight Facilities anthem then.

"Down to Earth/Turning back the season of history/Going off to change my galaxy."

Down to Earth is a call to action, a gentle reminder and encouragement for our often-misrepresented youth, that we have the numbers to instate a party that can genuinely act on our nations concerns. The Liberal Party has previously attempted to put restrictions on voters enrolling following an election announcement and this affects the youth vote considerably and all because they don’t want our vote. Think how convenient all of this would be if we initiated direct enrolment? Chris Pyne thinks that idea is a ‘rort’ to elect his party out of government. Perhaps, Chris, perhaps...

The time of the privileged fat cat politician, chuffing away on a stogie in an office that no doubt smells of rich mahogany is well and truly dunzo. To think our history could be transformed on July 2 is both a terrifying and thrilling thought. 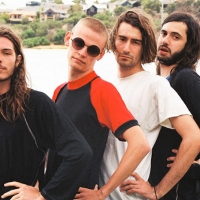 Listen to Hideous Sun Demon's new single and then go see 'em launch it tonightIf you live in Perth. 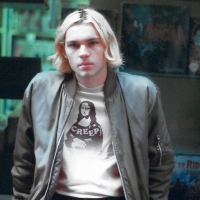 5 UNDER 500 June EditionSome new acts to watch in June.
Bands