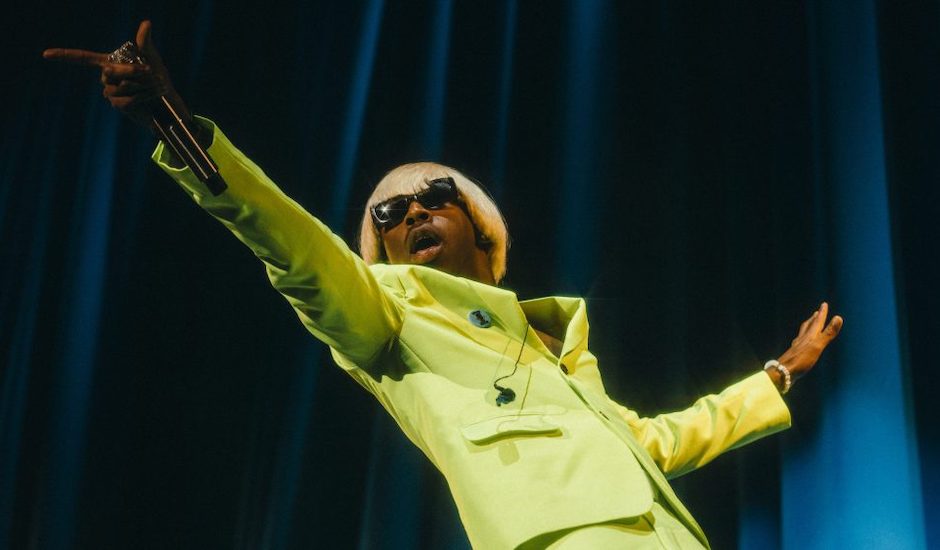 Music's ongoing problem with fan entitlement isn't something entirely new, nor is it going to be something that disappears anytime soon (regardless of how often it's called out by big, top-tier artists). Today, it's rearing its ugly head from Los Angeles' Camp Flog Gnaw - the festival Tyler, The Creator curates alongside Coachella parent company Goldenvoice - who announced its lineup with a '???' where the second headliner would be, which over the weekend, was eventually unveiled (on-stage, as they came out) as a trio of A$AP Rocky, then Lil Uzi Vert, then Drake - each playing a handful of songs each.

You've probably read the rest, but Drake - asking the crowd whether he could do a few more songs - was relentlessly booed by a harsh crowd who expected Frank Ocean; largely due to a combination of new music, his close friendship with Tyler extending back to the Odd Future days, sly billboard placements and seemingly legit advertisements from music news site Consequence Of Sound, which advertised Frank Ocean on the lineup before it was eventually called out on social media and removed.

Today, Tyler took to social media to address the situation, changing his Twitter bio to 'embarrassed by fans right now' before going on a multi-tweet rant: "I THOUGHT BRINGING ONE OF THE BIGGEST ARTIST ON THE FUCKING PLANET TO A MUSIC FESTIVAL WAS FIRE! BUT FLIPSIDE, A LIL TONE DEAF KNOWING THE SPECIFIC CROWD IT DREW. SOME CREATED A NARRATIVE IN THEIR HEAD AND ACTED OUT LIKE ASSHOLES WHEN IT DIDNT COME TRUE AND I DONT FUCK WITH THAT," he wrote. "THOSE SHITS IN THE FRONT AREA WERE THE ONES BEING MAD RUDE, WHICH, I CAN SEE WHY, BUT, NAH, FUCK THAT, YALL REPRESENTED ME AND FLOG TO MY GUEST AND MADE US LOOK SOOO ENTITLED AND TRASH." 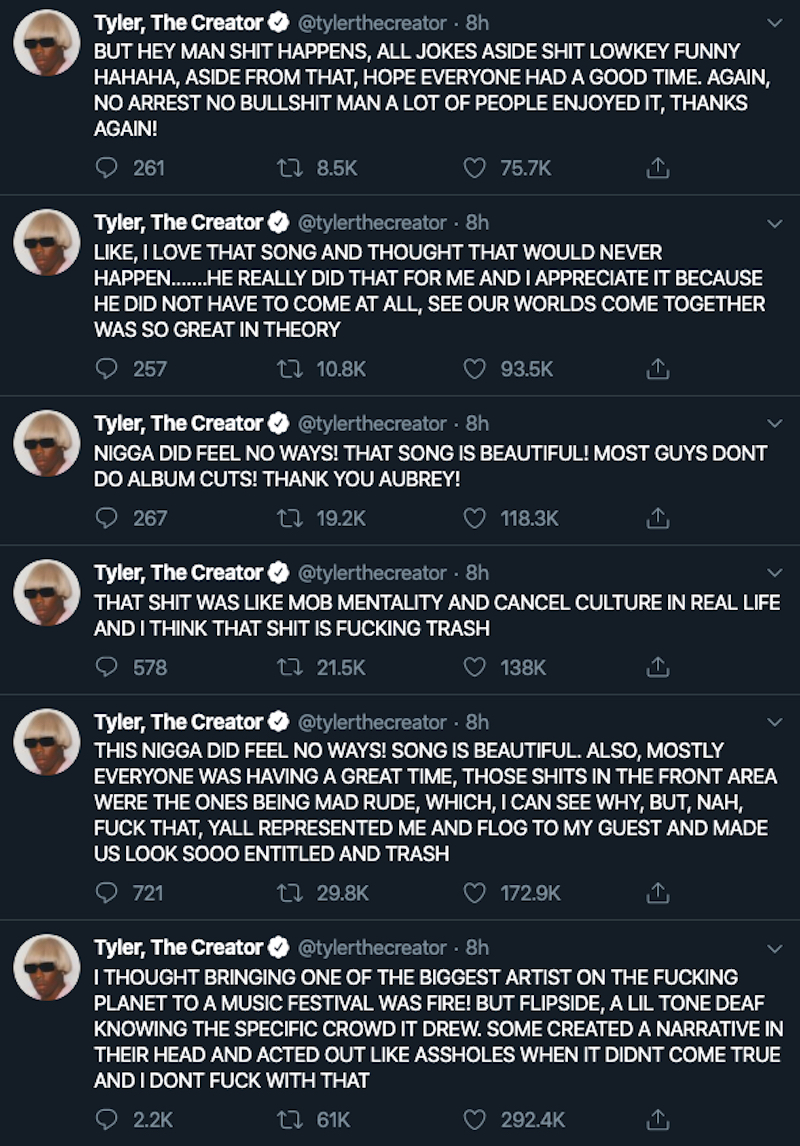 The truth is, however, music's entitlement problem goes a long, long way further than Drake being booed at a music festival of fans expecting Frank Ocean (despite the fact that Frank hasn't played a show in two years, and is notorious for his subtle approach to the live world that's only seen him play a handful of shows since the release of Channel Orange all those years back), and it's something particularly strong within the once-spoilt Australian festival scene.

Take Perth's Arcadia Festival event a few years back, which took a giant, mechanical spider that graces stages across the world (such as mega-festivals like Glastonbury) and placed it in our little ol' city with a lineup bustling with electronic talent from both Australia and the larger global sphere - Leftfield, Alison Wonderland, L D R U and Yahtzel's now-defunct Carmada project and Elk Road. It was a one-off event that didn't travel across the rest of Australia like many other festivals, it was a one-time-thing special to Perth and its blooming electronic world.

The reception, as you might recall, was absolutely shit. People blasted the festival in Facebook comments for booking a shit-tier lineup full of safe bets and people that seemingly never stopped touring, calling upon the festival to book 'better acts' to make it a more memorable time than, you know, dancing underneath a giant metal spider in the middle of the city that breathes fire - your standard affair. It was a strange argument too, considering Leftfield seemingly hasn't toured Australia since, and Alison Wonderland now finds more fame internationally, where she can get away from the tall poppy syndrome that this country grapples onto.

It brought back memories to another older, Perth-centric problem experienced at Stereosonic (RIP) in 2015, in which a petition was launched to push the set-time for JAUZ from an early-afternoon set to a late-evening set, which eventually brought together 420 signatures (lol). Regardless, Stereosonic changed the set-time and the end result was that JAUZ's set was shut off from people trying to get in, as the closed-warehouse venue was already over-capacity from the people that performed before him (something which wouldn't have happened if JAUZ had played at his original set-time, as planned by Stereosonic).

Bringing it back to a more recent time frame, this sense of musical entitlement is something spreading from festivals into the music canon as a whole. Despite announcing one of the year's strongest lineups led by three international heavyweights of three different genres, Falls Festival copped a bunch of slack this year for booking Halsey as their 2019/2020 headliner, despite her not just being one of the world's biggest acts at the moment, but one with a slight forward-thinking twist to their sound that makes it perfectly fit within the Falls Festival lineup ethos.

Another example in 2019, is the growing sense of entitlement when it comes to pop stars, particularly female ones. Despite Charli XCX seemingly calling out the piece for its misinterpretation the next day, Junkee's exploration of her recent meet-and-greets hit the nail on the head. It's a strange sense of entitlement and a "no-one's going to stop me from doing it, so I'm going to do it" mindset that's led to Charli having to constantly change her setlist due to her fanbase's continuing complaints, and when the shows actually happen, she has to sign anal douches and hold family ashes for the fan's social clout. Strange.

Last November, in another example, Ariana Grande replied to fans complaining about her tour outfit on Twitter - "brats. spoiled spoiled brats I raised" - only for the first reply to be an offhand comment that reeks with the entitlement of pop music stans and their need to push and mould artists into what they - the stans - want them to be: "WHO PAYS THE BILLS BABY." (Note: Yes, we know it was probably a joke and not meant maliciously, but also, it kind of reflects exactly what we're talking about here).

On Twitter, music 'stans' are constantly belittling artists and attempting to mould them into what they think the artist should be, from their singles and album tracklisting right down to the clothes they wear on stage, or whether their promotional material leading into the release's arrival is enough for them to be successful. That is despite these artists often having years of experience in the music industry, and the teams behind-the-scenes nitpicking at their every release and every promotional material often doing so with tried-and-tested thinking behind them.

As The Guardian's André Wheeler points out in a piece on the Drake fiasco, this sense of entitlement and the social media commotion it's created is overshadowing a big moment for Tyler, The Creator. Camp Flog Gnaw is one of the world's biggest and most reputable artist-built festivals, delivering lineups that share a tier with long-established events such as Coachella in its hip-hop drawings, and this year's lineup hosted more strengths than ever before - FKA Twigs, Solange, BROCKHAMPTON, post-IGOR Tyler himself.

However, how much have you heard about Tyler's Camp Flog Gnaw return? Earl Sweatshirt playing new music, despite releasing his second album this year just a matter of weeks ago? FKA Twigs playing her first live show since sharing her career-defining second album MAGDELENE? How much have you heard about A$AP Rocky or Lil Uzi Vert, who played the special guest slot before Drake came out? Even Drake's performance - playing off-cuts from past records in a special, one-off appearance to treat long-time fans - was overshadowed by those in the crowd in front of him, and the lack of respect they held for a special guest who is amongst music's highest-selling names full-stop.

As Taylor Swift put it herself (as someone who has been a victim of this very same entitlement in the past), this is why we can't have nice things. 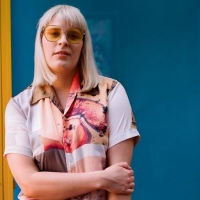 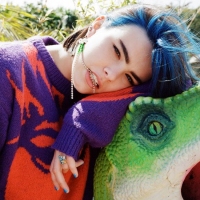