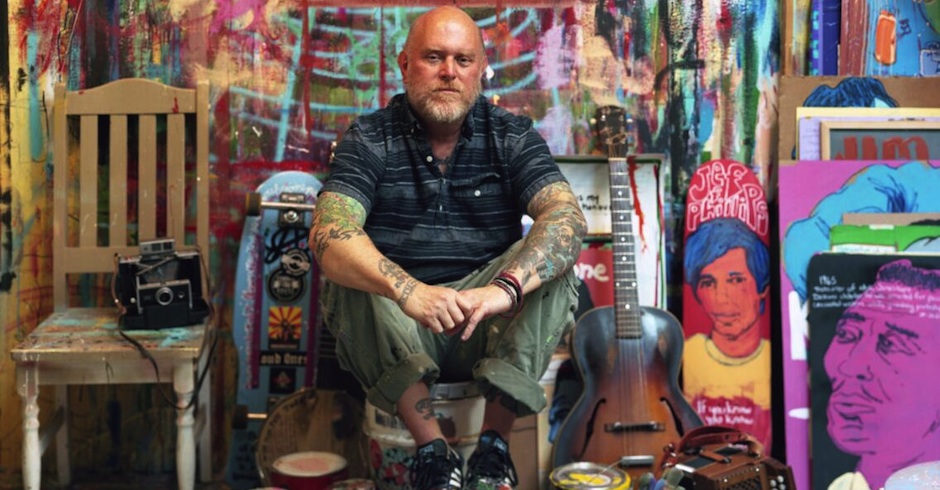 Former member of skate punk band, the Big Boys, Tim Kerr is premiering new work at Outre Gallery on Saturday November 19, from 2pm. Growing up in the 60s, Tim's work is a brightly coloured mix of sociopolitical ideas and self expression. Tim will be presenting a vibrant mix of works on paper, expressing human rights in the form of portraits of key historical figures.

We caught up with Tim in the lead up to the show to hear his thoughts on the DIY movement, what he would want to implement in the art community if he had a superpower to do so and what inspires him to create his work.

The D.I.Y movement was something you seem to be hugely influenced by. How did this movement shape your work, and do you think that it is still apparent in the art community today?

My dad instilled in me the idea of making things with the materials that were available around you, but I did not think of it as anything but being resourceful. It was not until the late 70's came along that I realised it had a name (smile). To be honest, I don’t think I heard the term DIY until around 1980 with the mostly kid-driven hardcore movement. It was then not until the 90s that I really put it into context. The act of doing something because you are not happy with the choices that are presented to you is pretty much the basis of every movement before it is given a name, a uniform, and a set of rules and guidelines. It is most definitely in my work as I am hoping to show this "truth" to others and maybe plant the seed that anyone can participate and take control of their own choices by painting people that made their own personal choice. As far as the art community, just like any sort of self-expression, you will have the instigators doing their own thing, and then the self-appointed "cool lunchroom table" dictating a name and rules for a bigger majority to blindly follow (smartass smile).

You mix up the materials which your work is on using skateboards, plywood and blackboards.  What was the inspiration behind painting on mediums outside of traditional canvas?

Most everybody paints on canvas and I was not that interested in adding one more to that equation. I also like the idea of found objects and recycling. 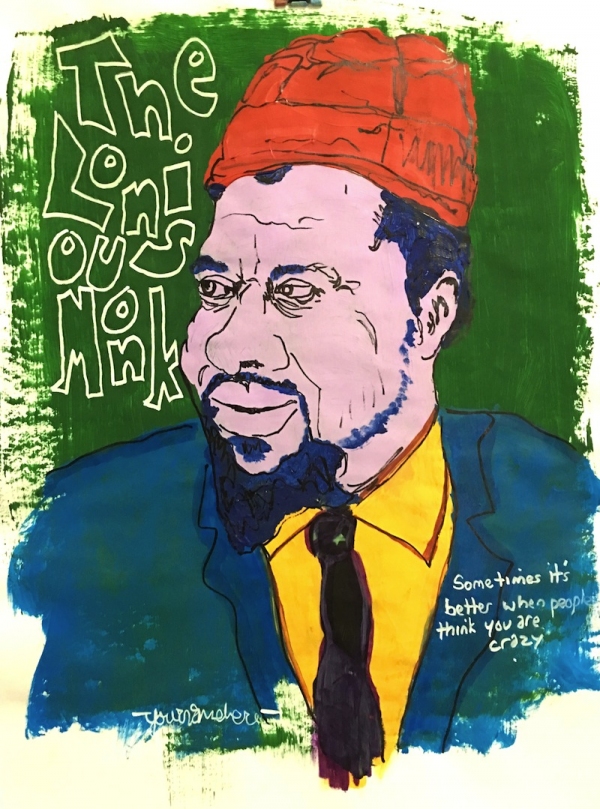 As the founding member of skate punk band, the Big Boys. What drove you to paint as opposed to primarily expelling self-expression through your music?

I have been doing art and music as long as I can remember. I have been told that the Big Boys stood out not only because we did not stick to the rules of the scene we were in, but we also stood out with the art we were doing. I understand the distinction/separation that people put on these two things, but I just don't think like that. It’s all coming from the same source, from within the person that is producing what you are presented with. To me, self-expression should not have limitations, so I do not limit my ideas to one or the other.

Your works seem to speak to the viewer about something bigger than aesthetics, featuring quotes and also key historical figures. Could you speak about what you seek to express through your work?

I have come to realise, because of bands I have been in, that you have absolutely no idea how something you do might influence others. Every person reading this has that capability every day with something you might say, or something you are wearing, etc. Like I said earlier, I have always done some sort of art and music. When the bands were really going, and my time was filled with the day to day of those details, I was not painting big pieces any more. When I started getting asked to show my bigger paintings again, I decided that showing people, words, and actions that had influenced me in a positive way, could maybe do the same in the viewer. I know that it is sort of corny, but I honestly hope that what I am sending out into the world is something positive for someone else to reflect on. Seek what they sought (smile). 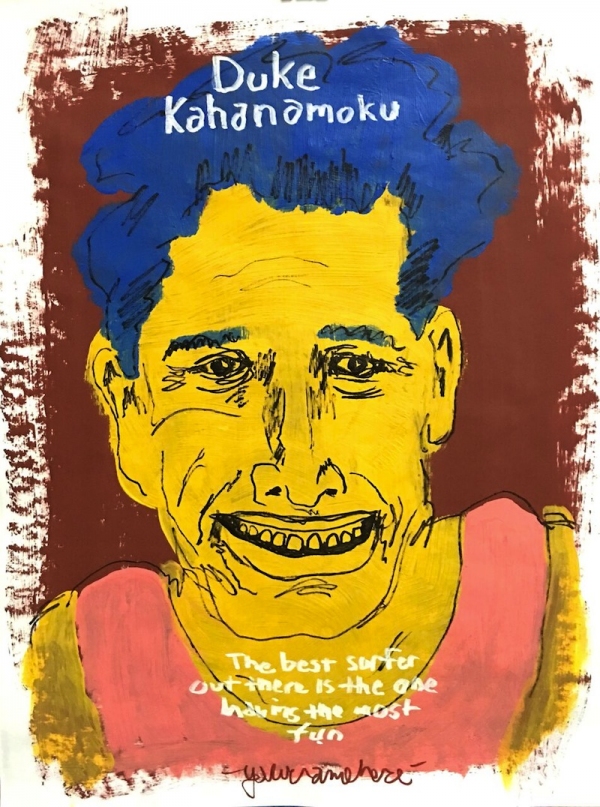 Can you remember the main artists who influenced your style of painting?

I am from the generation that grew up in the 60’s, so I am sure all that imagery was imprinted in my conscience. Both my parents were teachers...elementary school principal and elementary school librarian...so staying after school in the library, and those surroundings, until my mom could leave, left a visual impact as well. The first painter that I gravitated to was Van Gogh because you could see the paint sticking up and could really see "his hand" in the art. I was and am into graffiti and seeing Barry McGee's stuff and then later OsGemeos had/has an impact. I definitely think that art is everywhere, depending on how you look at things. Same thing with sound, so I am influenced all the time by my surroundings and what my friends are doing or might tell me to check out. I for one am constantly looking, listening, and learning and plan on doing so until my last breath.

The colours are pretty upbeat and vibrant - how do you decide which colours you want to use and do the colours have any significance to you?

I seem to gravitate to pastel colours. Maybe it’s being close to the Mexican border. Not sure about the significance, but just know it’s something I like. 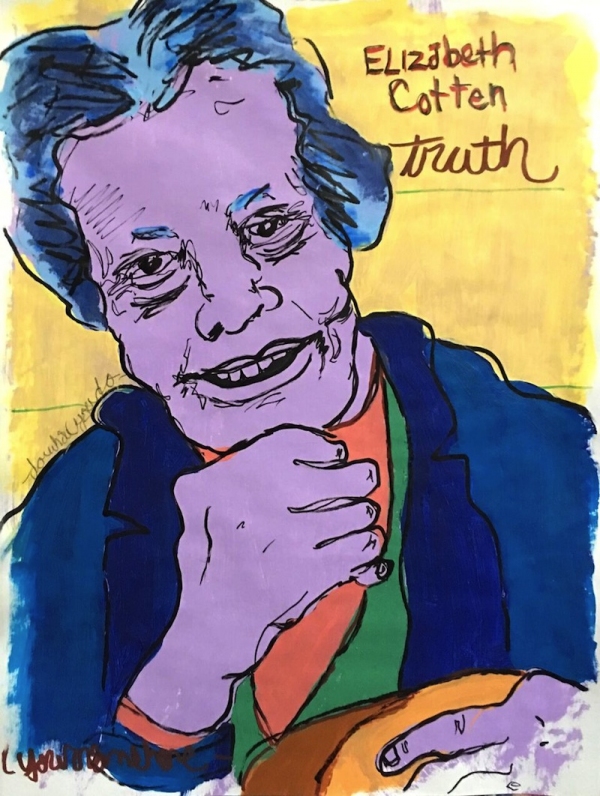 Could you speak about your process when you are creating a painting - from idea to completion?

It starts with the drawing that I do, or the drawing that I have in my head. I also really like the idea of interaction, so wherever the show is, or the mural, I think about the possibility that someone might see this who is related to the person(s) I am painting, or maybe knew them, or was just there and involved too. I want them to know that it was something that had some sort of an impact, even if it was just with me. A thank you card.

There are no rules or limits to self-expression. Throw the so called rule books out the window and fly your own way...period. The only validation that matters is what YOU think. Anything else is information and ammunition for YOUR next move. 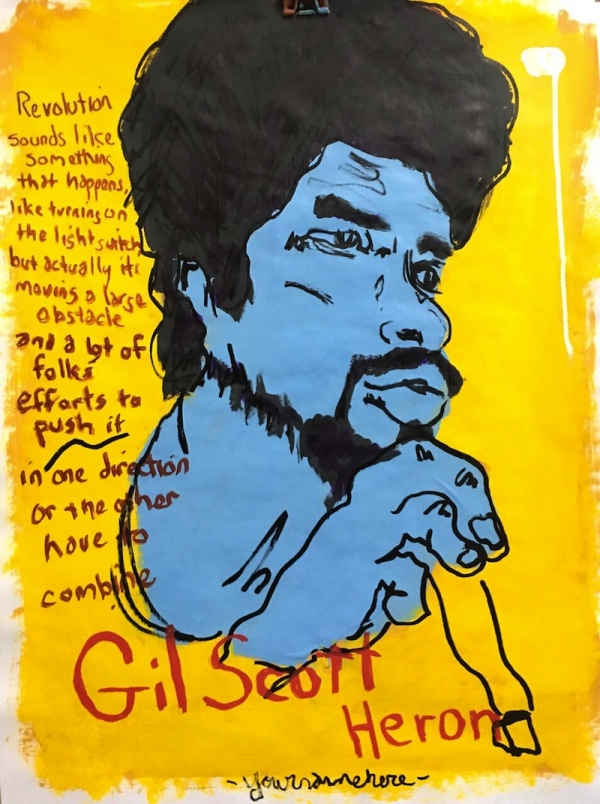 How would you describe the work you are creating for your show at Outre gallery later this year?

I think I just did (big smile). This batch will all be on paper and the same size to make it easier to bring over on the plane. I definitely want to paint Peter Norman for the show. People seem to forget that there were three, not two, that day on the Olympic podium, and it was a demonstration for Human Rights...not specifically Black Power. 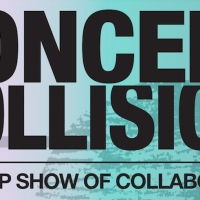 Framed: Concept Collision ExhibitionBringing some of Perth's most exciting creatives together. 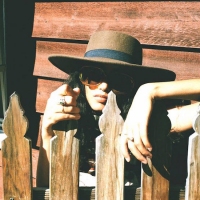 Meet Sunflowerseed Vintage, a Perth-based vintage label to keep your eye onWe're digging into the emerging labels of WA.
Art/Design

Meet Sunflowerseed Vintage, a Perth-based vintage label to keep your eye on

We're digging into the emerging labels of WA.

"Universal daywear that's made to last."

If you're into Alex Gray, this is for you.

An Aussie artist taking her wares to the world.