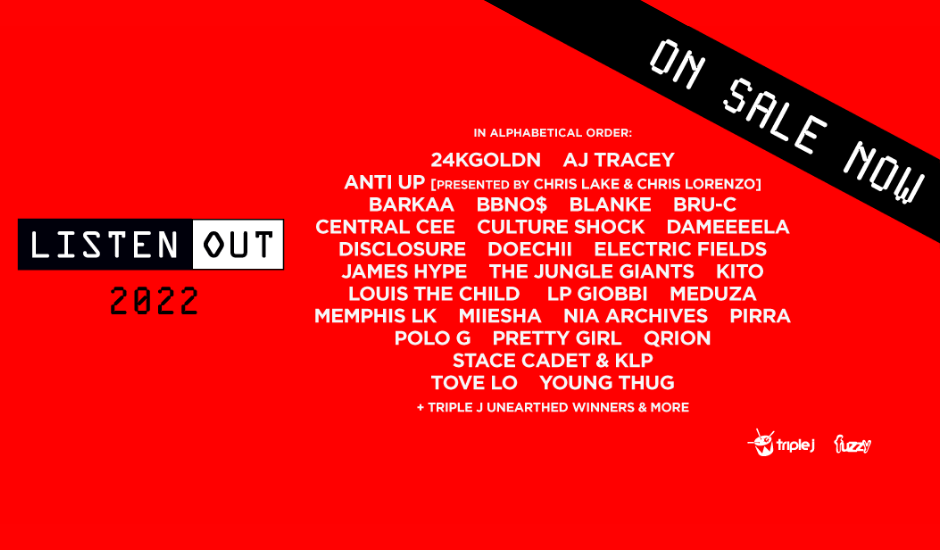 Last month music lovers and festival goers alike were thrilled at the announcement that Listen Out/In will return in 2022 (for the first time in two years) with numerous dates across the country in September and October. Fast forward to today and we’ve got the all important lineup to report on, in addition to the chance to get your hands on some free event passes for you and your mates!

Incase you need a bit of a recap/ haven't updated you calendar yet, Listen Out is taking to the cities of Melbourne, Perth, Sydney and Brisbane, whilst a Listen In (a hand-picked selection of Hip Hop & Electronic artists from the Listen Out tour) will be hitting stages in Auckland and Adelaide. For a full list of venues, take a look at the schedule below.

For Melbourners, the Victoria State government through their Victorian Entertainment Program are offering festival goers the opportunity to bet 35% of their ticket price back! To qualify CLICK HERE  and submit your claim before the fund runs out!

For those attending the show in Auckland, don’t worry you have not been forgotten about if you can’t find ticketing, lineup and venue information. The final touches are being bestowed upon your day of dance, just be sure to join the Facebook event page HERE so you can be across all updates and news as soon as they’re announced.

LISTEN OUT 2022 LINE UP ( in alphabetical order)

Whilst you pick through and process the stacked selection of global talent, here are a couple of our must-see artists gracing stages this year:

The 21-year-old platinum certified American rapper is currently ranked #195 world wide on the Spotify charts. Boasting hits such as VALENTINO and CITY OF ANGELS, his music blends the satisfying crunches of electric guitars with meaty beats and sonic bass booms, whilst his effortless flows ooze with infectious energy and raw emotion - perfect for jumping along to in a festival setting.

In high demand, collabing with an array of musicians, rappers, and producers such as iann dior, Internet Money (which we covered a couple of months ago), and his most recent release with sokodomo and BOYCOLD, be sure to catch the 24KGOLDN hype at this years LOF.

Hailing from Canberra Australia, Blanke is an electronic music producer who self-confesses “i love making cheesy melodic music that makes you want to cry just as much as i love making music that sounds like the apocalypse”. A cult-favourite of Australia's heavier electronic world, and nominated in the J Awards last year for Unearthed Artist of the Year, he’s appeared on many local lineups such as GTM, and on international stages such as Lost Lands and EDC Las Vegas.

High energy chops that are entangled with beautifully atmospheric sounds, Blanke’s set is one to get lost in at this year's event.

Multi-hyphenate DJ, producer, radio host and Yuggera woman Dameeeela delivers high energy across hip hop to acid, to the classics. Her strong passion and electric performances have seen her warm up stages for the likes of Skepta, Tyler the Creator, Charli XCX, Anderson .Paak, Genesis Owusu, in addition to appearances at Splendour In The Grass, Falls Festival, Listen Out, Laneway, Pitch Music & Arts, Groovin The Moo, and BIGSOUND.

Unveiling her debut single The Shake Up ft. Tjaka this year, her compelling sounds grounded by ongoing reminders of club music’s origins in Black culture will have you on up on your feet, hungry for more.

DIY producer, vocalist, DJ, and lover of analogue synthesisers, Memphis LK combines sensibilities from her early influences of soul, pop and RnB with underground dance, UKG, 2-step and breakbeat, writing and producing from her bedroom to craft absolute bangers for the big stage. With sweet vocals that drip with a melancholic quality, combined with intimate lyricism, she really can do it all, and people are starting to notice as her online cult following continues to exponentially climb.

Her latest release tricky showcases Memphis LK’s unique ability to craft a sound unlike anything else Australia has heard, whilst remaining familiar enough to wiggle into your brain and soul - making her set a must-see/listen at this year's Listen Out.

Currently based in Los Angeles California, Kito is a producer, singer and DJ who originally hails from Denmark in West Australia’s south west region. She’s had an incredibly remarkable career to date (something we covered a few years ago), creating official remixes for Beyoncé's Run the World (Girls), Broods' Too Proud and Wafia's Flowers and Superpowers, producing music for the likes of Mabel, Jorja Smith, Banks and Ruel, and producing her own killer tracks which were recognised with a nomination for the Breakthrough Songwriter of the Year (Los Angeles) at the 2020 Global APRA Music Awards.

Performing at both Listen Out and Listen In, Kito’s set is world class with humble origins, and a must-see at this year's festival.

Tickets are currently on-sale, but if you haven't got a chance to whip your wallet out yet, why not try your luck at winning some free passes to Listen Out/In 2022?

The legendary Listen Out team have given us 5x event passes to give away, so we’re running a competition to give you and your friends a chance to celebrate the festival's triumphant return.

1) Tag the mates you’d bring along.

2) Tell us your favourite Listen Out memory.

The competition closes Sunday May 22nd 11:59PM AEST so GET COMMENTING! 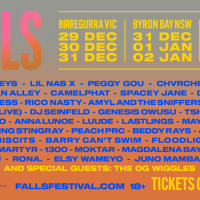 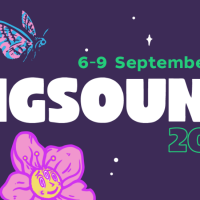