Rihanna’s videos have always been pretty standard pop fare: sexy as all get-out, with killer dance routines. Of late though, they’ve taken a turn for the cinematic, almost evolving into micro arthouse film pieces, laden with genre-references and a touch of the absurd. First there was the blood-soaked revenge fantasy for Bitch Better Have My Money, featuring a cameo from proper actor dude Mads Mikkelsen (Hannibal), that was so visually rich it prompted many music commentators to delve into frame-by-frame analysis (we wrote about it HERE). Then the eight-minute long, Drake-featuring Work video, which was ‘two videos in one’, the first depicting a wild Caribbean party scene and created by X, the director behind Kendrick Lamar’s King Kunta video, and the second, an intimate blue-and-pink tinted film, stylistically similar to Hotline Bling, and shot by Tim Erem. Most recently, we received a slice of arty, minimalist erotica by way of the Kiss It Better video.

That's not to say Rihanna ditching the predictable video clip schmuck has equated with a loss of views – Bitch Better Have My Money still reeled in something like four million views in the first 24 hours. Although that may have more to do with the fact that despite the shift into more imaginative clips, Rihanna’s outfits still leave very little to the imagination…

We're all for the move into more conceptual pieces. We get some interesting additions to the collective cultural cannon, Rihanna still gets her money, everyone wins! The singer’s latest visual offering (which hit half a million views in thirty minutes), cheekily released by stoner goddess Rihanna on 4/20 day, is for Needed Me, the third single to come of her April-released full-length ANTI. It’s fairly unanimous that Needed Me is one of the strongest songs on ANTI. Over a choppy DJ Mustard beat, the fiercely independent RiRi sings to an ex-lover who messed up real bad, flipping between a swooning, epic chorus and verses with real bite in them ‘You been rollin’ around/Shit, I'm rollin’ up.’

In the clip, Rihanna paces around a shiny beachside mansion in bathers and a sheer robe, touting a silver gun, before switching the leisure wear for leather-wear and motorbike, and heading to a grimy strip club to get revenge on the aforementioned ex, before a speedboat getaway. It’s directed by Harmony Korine – the neo-underground visionary behind the weirdo cult classic Kids and the more recent youth culture exposition Spring Breakers (plus a coupla videos for Cat Power, the Black Keys and Sonic Youth). At first Korine would seems like an unexpected choice to direct Needed Me, but now we’ve watched the video, safe to say Korine x Rihanna is a pairing made in neon-lit, glossy-grit heaven. There's plenty of cool overlaps with the film too: as well as all the guns, bikes, girls, and grills, there's shots of Rihanna holding a gun to a guy's face that look like when the SB girls held a gun to Alien's face, and at the end of Spring Breakers, Alien and his girls arrive at Gucci Mane's mansion by speedboat for a killing spree similar to the one Rihanna went on just before she jumps on her speedboat; and both scenes are depicted in resplendent pink neons. There’s a nice recurring thematic at play here too, when you think about how Britney Spears’ Sometimes was used in Spring Breakers, where pop music became the filmic device that demonstrated the superficiality of the world the film’s characters inhabited.

The only disappointing thing about this video is the lack of a Gucci Mane cameo! 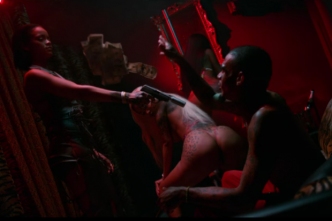 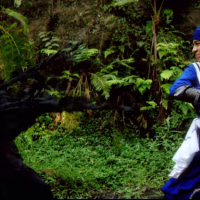 Watch L-Fresh The Lion take on his demons in the video for 1 in 100,000Enlisting the help of a young Sikh warrior in the clip, plus we announce his much-anticipated upcoming second album. 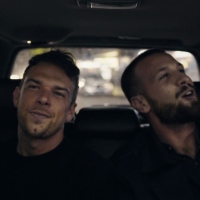 Spit Syndicate have the time of their lives in video for Know BetterThat One Day crew, never not partying.
Rap / R&B