Give It All is Foals' most beautiful song on What Went Down if not their best, on par with the magnificence of Spanish Sahara and the transience of Moon. But the video treatment for Give It All doesn't match up to the desparation coursing through the veins of the song. The track carries elements of previous Foals' videos like Late Night where the group takes an almost voyeuristic angle; playing as a stage band as the world goes on. In this it's about a collapsing relationship and how all that's left now are memories. Yannis does it best as he sings, "As you look back I"m pulling away / you catch the bus / I catch the train / all that remains are words in the rain." Before launching into a chorus ladden in emotion. But what brings the video down is the weakness of it's shots, sure you can see the desire of what once was but you know it's all staged and you aren't truly sucked into what plays out before your eyes. When that happens, you know you've seen something worthwhile. Give It All is from Foals' fourth album What Went Down, you can read our interview with them here and see them at Falls / Southbound at the end of the year. 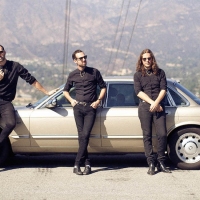 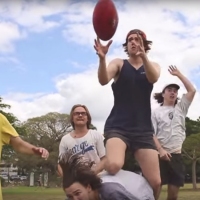