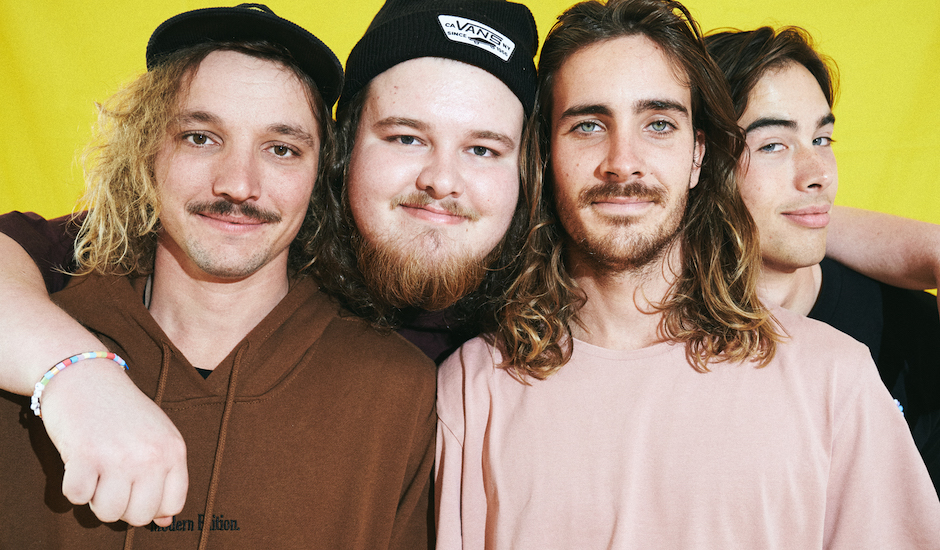 2019 was a spectacular year for Sly Withers. Prior to then, they were somewhat of a well-kept secret amongst Perth's indie-punk-y live music realms, sharing a self-titled debut EP back in 2016 and from there, becoming an exciting addition to the heavier live music space, all while further singles push their sound and showcase that they're more than just a run-of-the-mill punk band making run-of-the-mill punk music. Last year, however, they really stepped things up; their second EP Gravis being a masterclass that showed how the group has evolved and grown over the space of the last few years, while turning attention to a national audience too, as shown with some huge shows with Amy Shark, for example.

The EP was a big moment for the group that really set their trajectory to something special. It makes it a shame then, that much of their celebrations following the EP's release were effectively cancelled due to coronavirus; a national tour (also in support for their first single of 2020 in Explode Into View) postponed, while their Splendour In The Grass booking - a monumental occasion that was sure to further amplify the group nationally - has hit the back-boiler, put on hold as Splendour move onto 2021 after postponing, then cancelling their 2020 festival.

Nevertheless, Sly Withers are continuing to look forward, and Cracks gives an opportunity for the group to showcase how they've further refined themselves over the space of the last few months. It's a heavier, punk-leaning tune in-line with much of their Gravis EP if it wasn't for Sam Blitvich leading the way, stepping forward as a co-lead vocalist for the band's new era alongside Jono Mata, who has long been the core vocals of Sly Withers' past form. "I think the understanding between the two of us is ever-growing," says Sam, and you can really feel that on Cracks - it's something new; a shake-up for Sly Withers that doesn't so much feel like a major shake-up as much as it is a seamless transition, built from their close connection and the collaborative smoothness that comes from that.

Sam leads the way on Cracks, and as a result, it feels underpinned by a heavier emotional weight than a lot of their past work, with the changing vocals adding a further dimension that really bolsters the depth of Sly Withers' work, and separates it from the rest. "
I really like the way we’re sharing songs – both doing lead vocals in certain sections. And for Cracks, Jono wrote a bridge for it off a little melodic idea I had and then on a plane ride back from over east one time I wrote a bridge for it without knowing he’d already written one. That’s how Cracks kind of came together. Those kind of things have been really cool to get more in sync with each other in a way that we’ve always strived to do."

Produced by Matt Templeman (Make Them Suffer) - who the band says really helped push them to do something different and experiment with the band members' roles - the single really feels like Sly Withers' new beginnings; an opportunity to look forward after being held back due to things out of their control for so long.

The track also arrives with an official video - premiering on Pilerats today - that's in our opinion, one of the smartest to come out of a COVID world. It's DIY but without the boring, over-doneness of the band and some friends dancing around on Zoom; the band - alongside director and regular collaborator Tim Elphic - really capturing the fun that's core to the group, through moving visuals that pop with colour and clever editing that makes it stand out. "We had no background idea to the video other than like, ‘let’s have some backgrounds and move them around," says Jono on the clip. "But the first time Joel [Neubecker, Sly Withers' drummer] showed his dad, he was like 'Oh it’s like a Zoom call, isn’t it?!'."

Take a dive into the video below, alongside some behind-the-scenes photos shot from the video's creation:

All photos by Shannan Stewart except the first two, and the last one. 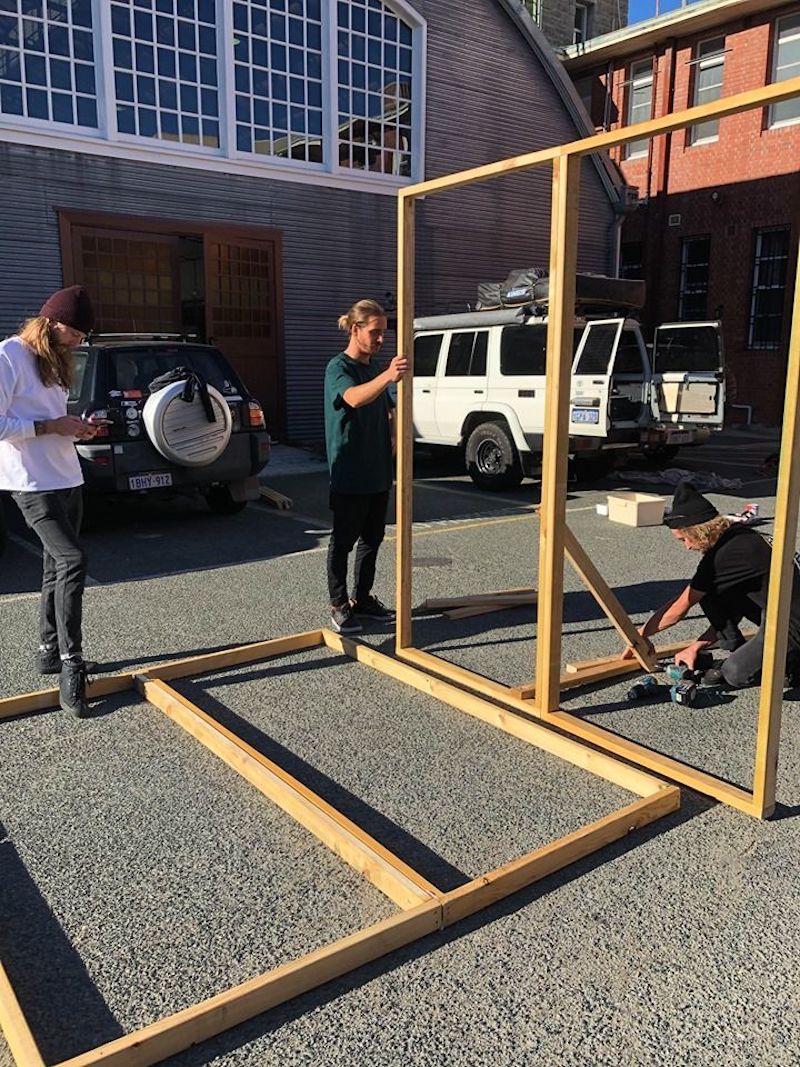 We (mainly Joel) built the frames for this clip’s backdrops ourselves. This is us (mainly Joel) assembling them in the carpark on shoot day. 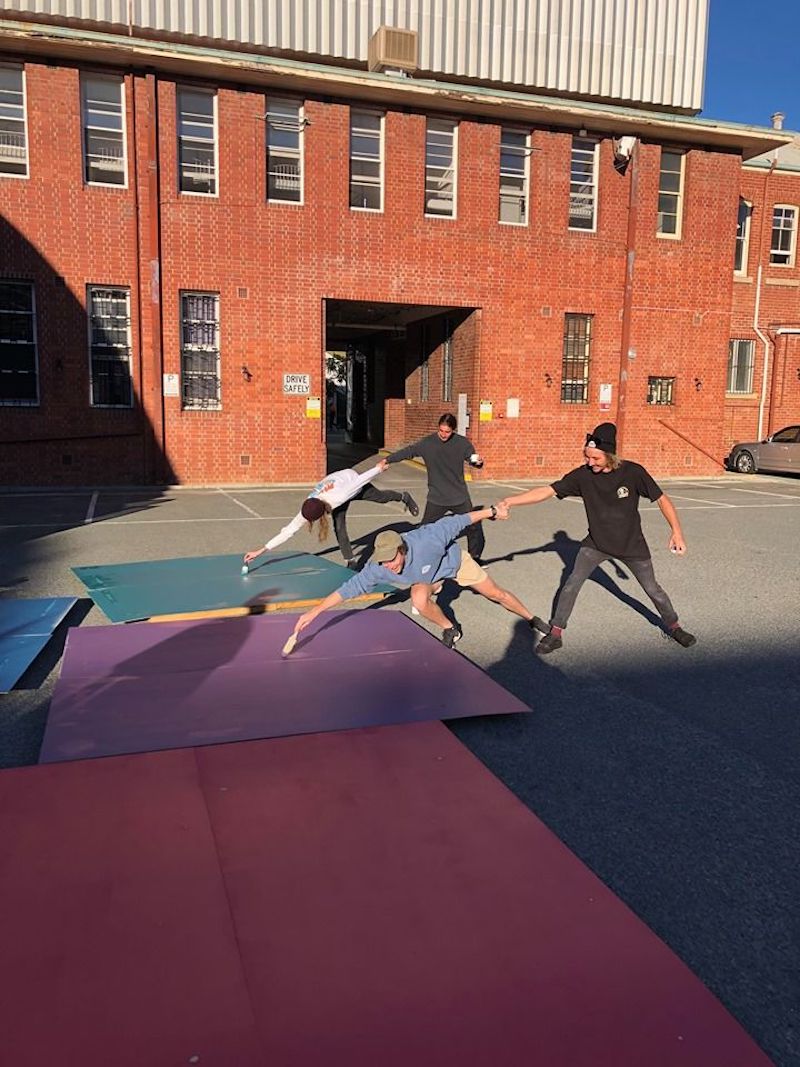 Team work. We painted all the backdrops ourselves the day before the shoot and had to do some touch ups after transporting because they were slightly not yet dried maybe when we loaded them onto Joel’s roof racks. 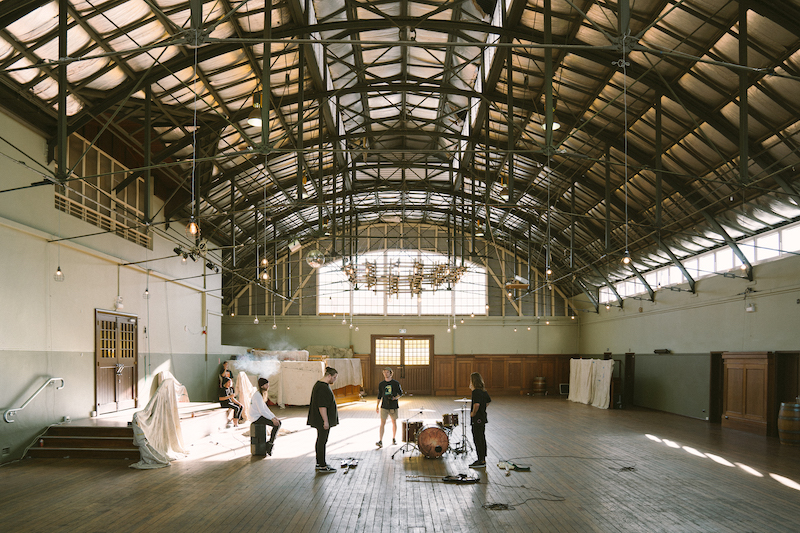 We shot the clip at Perth Mess Hall- a huge charming building with a lot of history. 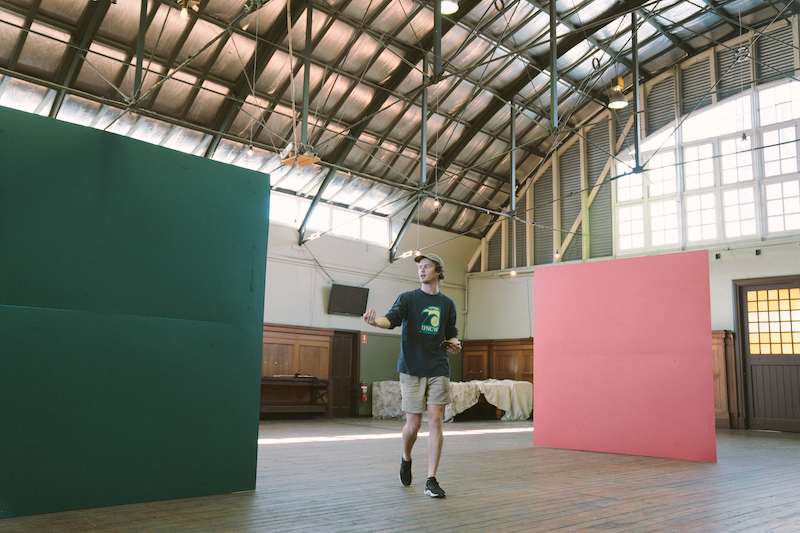 This is Tim. Tim makes nearly all of our videos and we love him lots and lots. 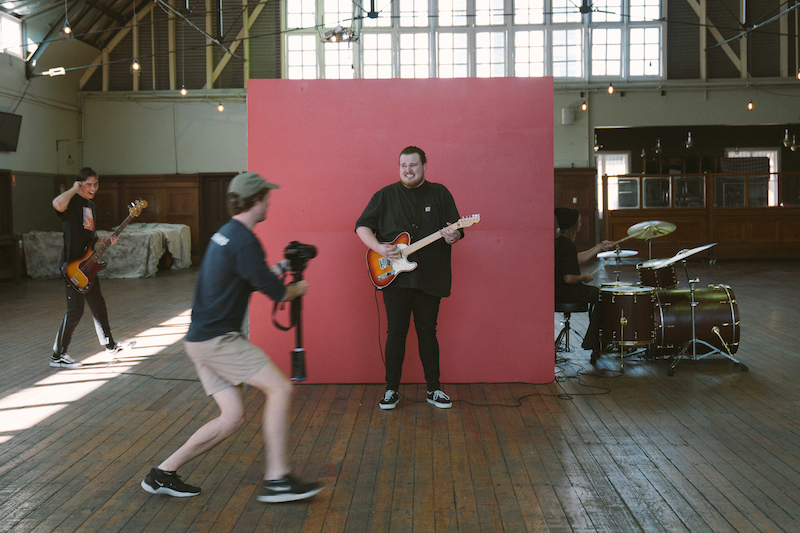 A practice run of one of the shots. Tim runs around while Sam and Shea cringe at how loud the track has to be played in the (big echoey) room so that Joel could still hear it while banging drums. 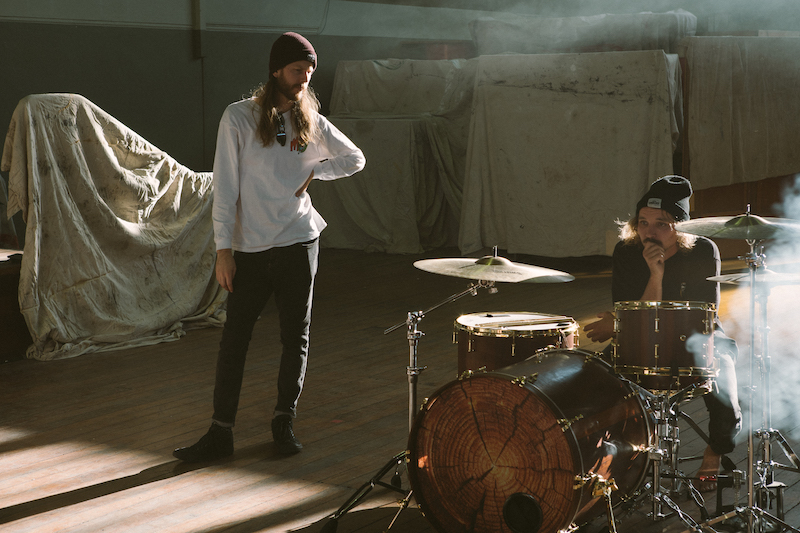 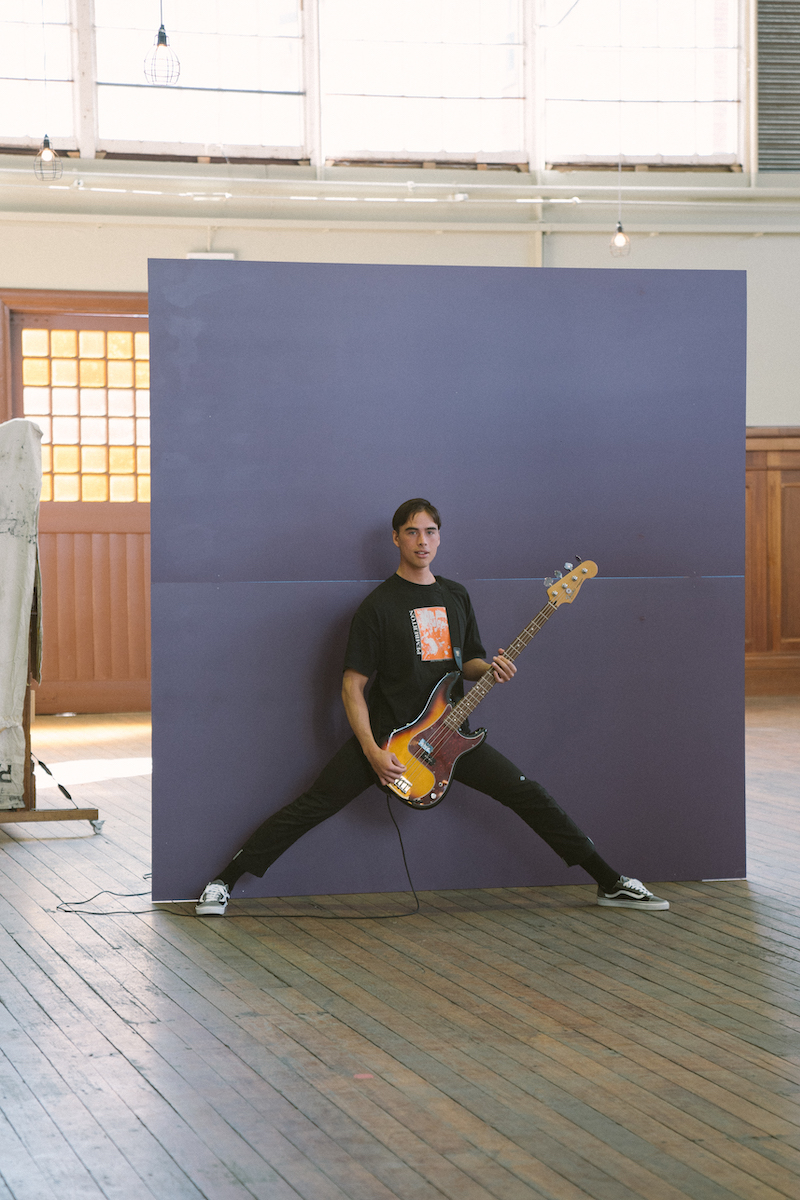 Shea aka “the innovator of power stance”. Some would argue that his claim to inventing the stance is fraudulent however there is no denying his mastery of it. 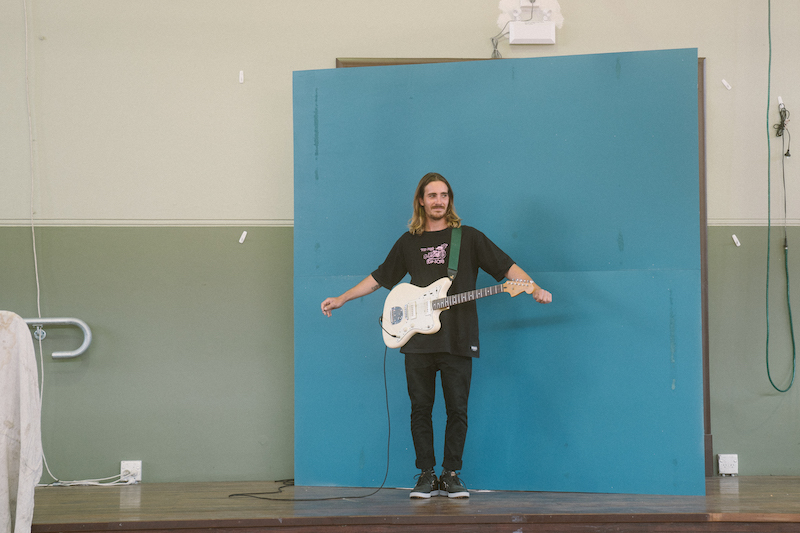 Jono trying to maintain his balance. 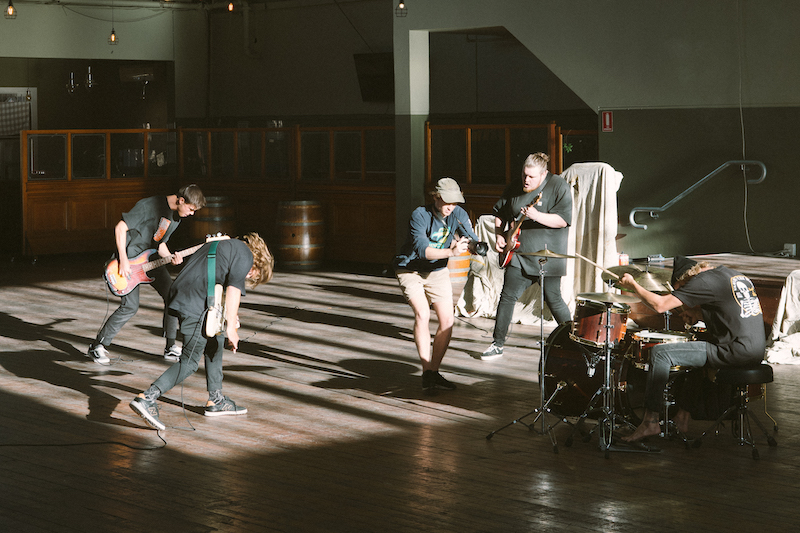 Fun fact 1: Shea rocked so hard in this take that he snapped the strap off his bass. 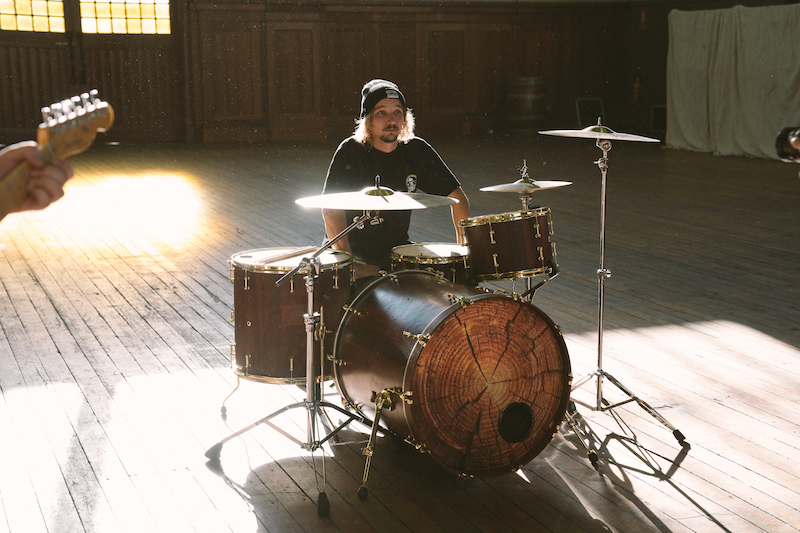 Fun fact 2: Joel legitimately built this beauty of a kit out of jarrah door frames. He used nothing but a pair of scissors and a glue stick. 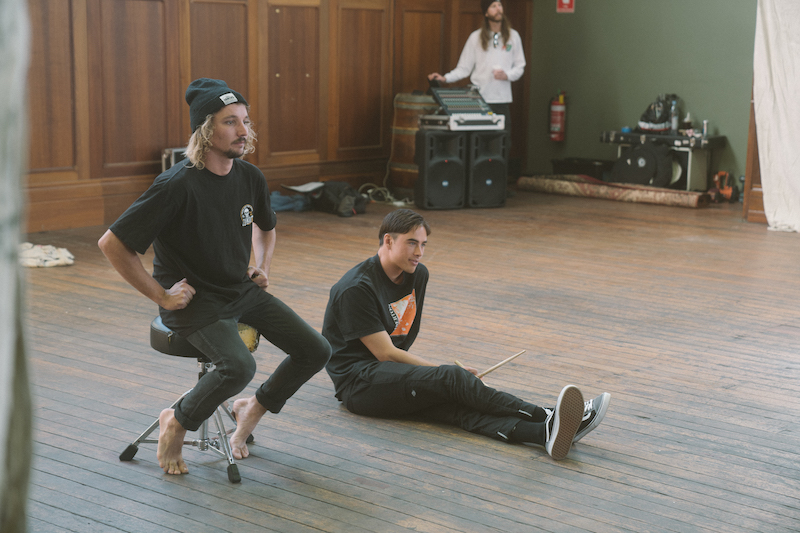 Joel and Shea having a sit while skinny performs a captivating DJ set in the background. 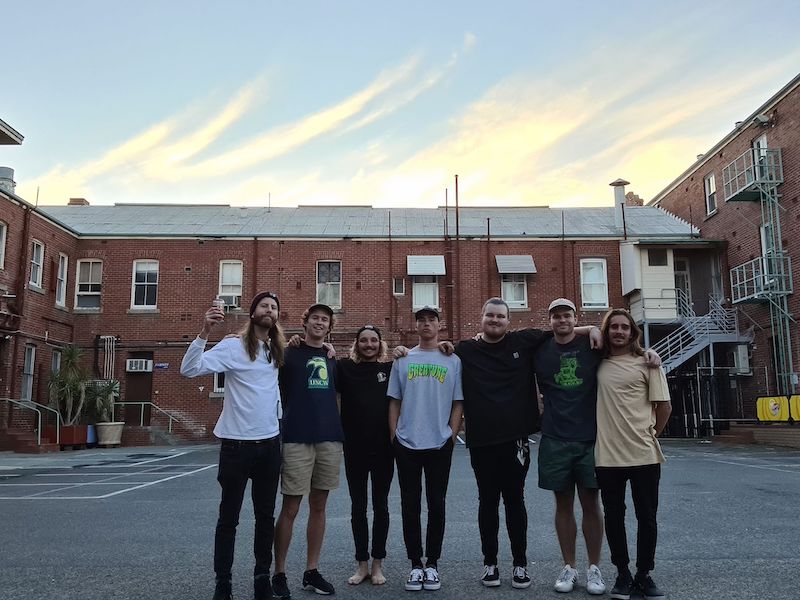 Team pic at the end of a big day of doing the thing. 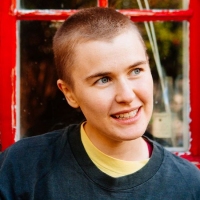 The Theory of Absolutely Nothing, and Alex The Astronaut’s heartbreaking beautyOn her debut album, Alex The Astronaut proves her ability in stomping all over your emotions - even when she’s singing upliftingly. 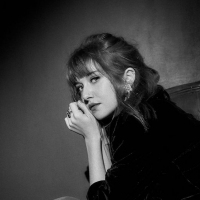