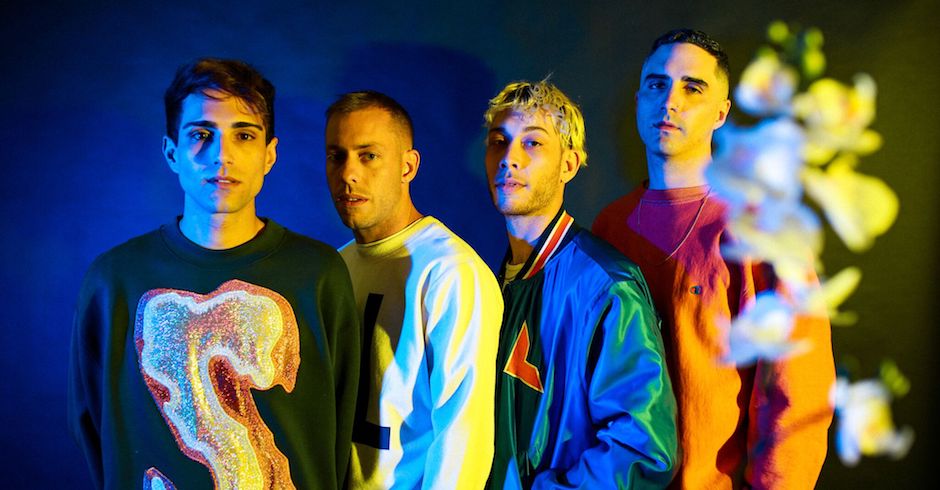 When it comes to the big guns of Australian punk, it's hard to find a band more exciting than Sydney four-piece Hellions. Over their past four albums - topped with the release of their latest, Rue, via UNFD today - the group have become one of our heavy scene's most dynamic and theatrical, famous for pairing dark riffs with bright melodies and meaning-rich vocals that has seen them become one of our most successful (their last album, 2016's Opera Oblivia, reached the ARIA Chart top five).

Compared to their previous work, Rue is Hellions at their darkest, most versatile and most meaningful. X (Mwah), the album's lead single, showcases this perfectly, mixing together elements of punk, metal and hard rock with an addictive bassline and thick, genre-bounding melodies that, when they're in the form of frontman Dre Faivre's lyrics, explore themes that you wouldn't find in much of heavy music's history. "60% of the human body consists of water. We are made of stardust atoms. These are remarkable things to contemplate - our very being is miraculous," said guitarist/vocalist Matt Gravolin on the track back in February. "But considering how few of our actions bear the salubrity of the water we’re composed of and how little light we’re projecting unto the world each day is enough to make one believe we are more of an aberrational race than a miraculous one."

That's just the start. Rue is a masterclass as Hellions' experimentalism within punk music and their knack for writing seemingly simplistic vocal melodies that with deeper listening, become loaded with meaning and questioning - things that really encourage you to dive into the album multiple times to ensure you haven't missed anything. Across driving instrumentals that range from restrained and subtle to ground-shaking and raucous, Hellions touch on everything - the life-long strive for happiness; the Orlando Shootings; humanitarianism; and our overwhelming interactions with the digital world. It's an incredibly deep record, but the album's brightness and sheer skill makes it an album worth diving deep into.

At times, the depth of the album is almost too much - which is why we got Matt Gravolin to dive into the album's themes and making song by song, and it's quite a read. Check out the track-by-track walkthrough of the album while you jump into the record below, and if you like what you're hearing, check 'em out a couple of east-coast album launch shows that kick off on Saturday - full dates and deets at the end of this article. Grab the album HERE.

The word ‘Rue’ doubles as both a feeling of regret/repentance and a feeling of compassion/pity, which covers the dual subject matter of the record succinctly. The title is a reflection of the fickle and multifaceted nature of the human condition.

I had always wanted to write a waltz piece, so I made a point of making one for this record. It was written with a guitar but transcribed for the piano to get that vaudevillian vibe across a little more. The comic touch of the piece did well to compliment the little tale of foolish hubris accompanying it.

It took many months for this track to resemble the form in which you’re hearing it. The tempo was shuffled around many times; the bridge was re-written three times; the vocal rhythm and lyrics in the verses were rewritten a half-dozen times, all in search of the flow that we’ve ended up with.

Lyrically, this one picks up where its introduction left off, detailing the egocentric and opportunistic nature of our species. High consciousness has burdened the human race with an inherent brand of inescapable suffering, exclusive only to us. The verses are voiced by a present-day pessimist, feeling immured within his consciousness, turning to excess and abandon for a reprieve. The voice of his inner child bleeds into the chorus, pleading him to remember that the world hadn’t always felt that way and that it doesn’t need to. The present-day character finds himself desperate for change in the bridge of the song, having heard the cries of his lost innocence and naiveté.

60% of the human body consists of water. We are made of stardust atoms. These are remarkable things to contemplate. Our very being is miraculous. But considering this, how much light are we truly emitting? And how many of our actions bear the salubrity of the water within us?

This one is embracing abandon and recklessness in the face of defeat and reads something like a bitter farewell letter. The effervescence of the music played against the painfully sober tone of the lyrics made for an interesting dichotomy.

We really embraced our pop influences on Smile - it’s the most easy-going and simple cut of the album. Smile is questioning whether or not there is any real connection to be made in the digital age. We’re dealing with a moment-to-moment addiction to entertainment that often comes at the expense of our compassion.

Our Social Media platforms have each become something of a Dilettante Disneyland, with many of us loudly pontificating and pushing ill-informed agendas into the psychosphere for the sake of self-validation or merely for the sake of having something to say. This mentality of self-righteousness and constant judgement spills out into the real world and seeps into our collective being. How are we to understand each other past all of that?

I loved the relationship between the Frusciante-esque twiddling of the verses and the simple rock beat behind it, that was one of the only things that remained from the start of Furrow’s process up until the end - it was, at one stage, a five-and-a-half-minute sprawler but ended up feeling more at home in a traditional ballad format.

Furrow is about the process of learning and acceptance experienced throughout a relationship, the challenges of clashing values and the impact that outside influence has on self-worth and in turn, the state of being in love with one another.

This interlude is an extended, more fleshed out version of what used to be the bridge of Furrow. We wanted it to feel like it is being heard inside of a ballerina music box.

The title track was the first song written for the record, musically and lyrically.

I was sat with an acoustic guitar one night, wanting to write something sweet and a version of the starting chords and melody came to me, “…and I’m lost in reverie, you and I are seventeen”. It felt as though it was destined to be something of a love ballad. Midway through writing the song, I went to eat something and turned on the television to see a report on the tragic Orlando shooting. It turned my mode of saccharinity into a synthesis of despair, compassion and anger. I wanted to document this shift in my mood and touch on the change that occurs in one as they grow older to see the terror of the world cast a shadow over the innocence of youth, “…and then slowly our loathing will interfere”.

The song underwent many changes in key and structure once we got to the studio. I explained to our producer Shane that I wanted us to talk to God in the chorus of the song - because in our most desperate times, even the most assured non-believer will fall to his knees pleading for a higher power to show itself. Shane told me that we don’t need to look up but to look around us for hope and a sense of sanctuary, and with that, the vision for Rue was completely realised. We wanted to bring forward all the love we could muster to combat the hopelessness pervading the world in our own little way.

Anxiety is personified in the form of Beth Morris’ ringmistress, ushering in Side B of Rue.

Beth performs under the stage name Luna and will be releasing new music very shortly so keep an ear out for her!

This is the continuation of themes explored on Opera Oblivia’s Lotus Eater, further elaborating on the dangers of choosing not to deal with practical concerns and choosing not to acknowledge the source fractures of one’s psyche, still continuing to crack. Musically, we wanted this to feel like the fever dream that anxiety is, from the soured mob chant heard in the songs introductory section to the verses of a nightmarish abandoned warehouse party to the bridge of ethereal paranoia.

The progression and rhythm of this one feels to me like a musical accompaniment to a Jim Carrey character strutting and dancing along a sidewalk - like the playful slipping of one’s veneer of sanity.

Hyde takes Jekyll over completely on Get Up!. This is a satire on millennial fear, about trying to let go and not take the absurdity of our condition so seriously. There is relief to be found in losing your mind for a while…

…before reality comes crashing down. Harsh Light is our most direct foray into R&B thus far. Inspired by some time spent in a bad acid trip, it details the experience of one over-indulging in low-hanging fruits, an example of the anaesthetic veil being worn so tight that it begins to suffocate the wearer. Desensitisation at the expense of any remaining hope.

I’ve grown a year older. Woes wax and wane. A formidable and all-encompassing ambivalence canopies my home, but I know that hope has to prevail in order for a person to survive. If you feel alone, this is our reminder to you that you certainly are not. Happiness is not unobtainable and the journey toward it must not be abandoned. 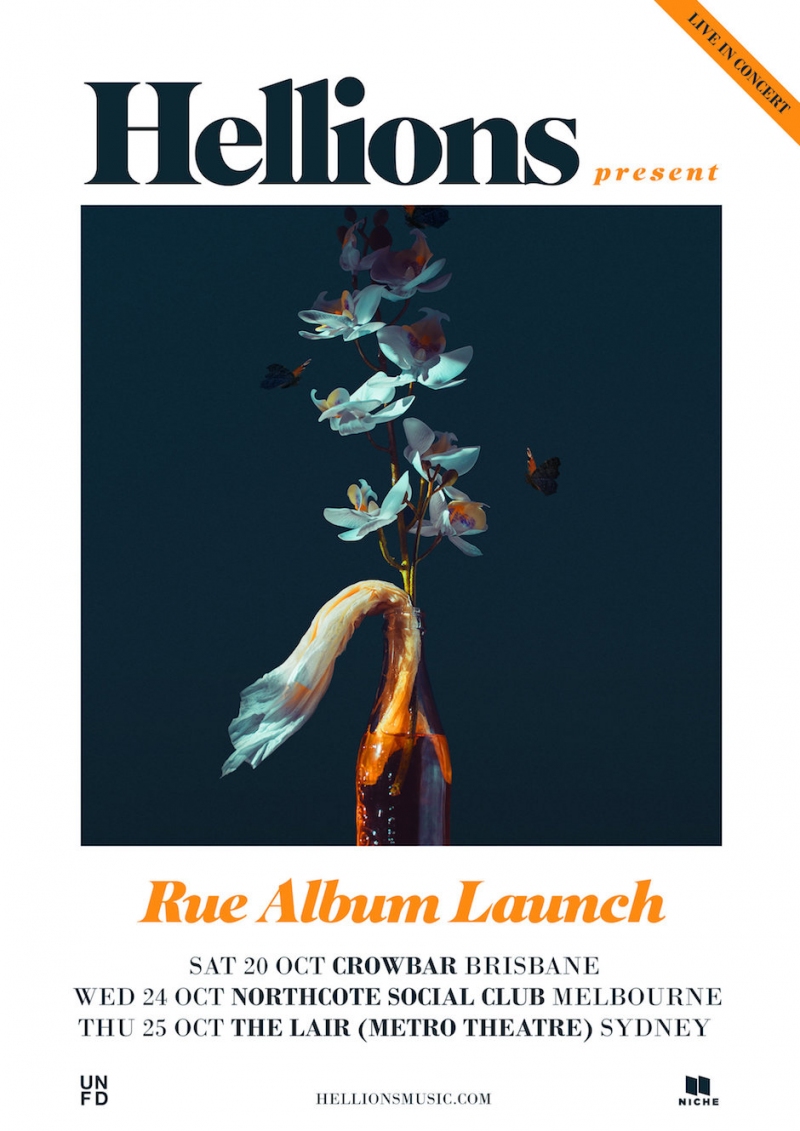 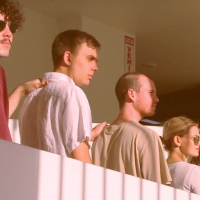 Premiere: IVEY drop quirky vid for Won't Be ahead of EP release tomorrowThe Gold Coast five-piece will be touring their EP with an east-coast run of dates across the next few months. 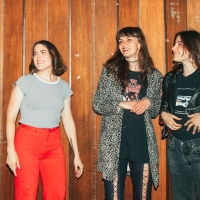 Track-By-Track: Body Type talk their self-titled debut EPThe quickly-rising Sydney will be touring the country over November/December and will play at SXSW 2019.
Bands