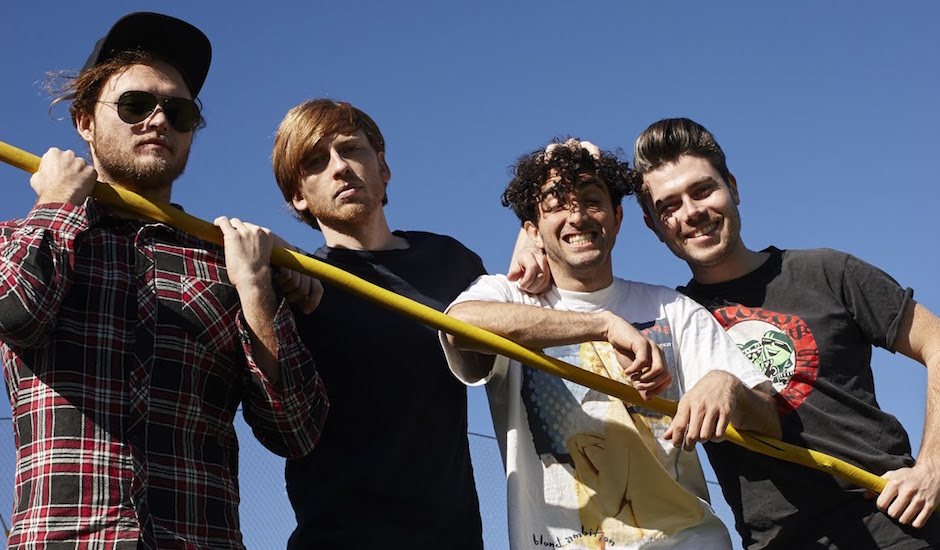 Palms are celebrating the release of their new album, Crazy Rack, on Friday 30 October, which seems like as good a time as any to have a chat with the fellas about the album, touring life, and where to next for the Sydney four-piece. It seems like such a good time to do it that we actually did, and you can read the results below:

First things first, you guys must be stoked for the release of your new album, Crazy Rack on October 30 – how long has it been since you started it, and wha was the writing/recording process like?

Yeah man, so stoked. We actually started recording it last year, but weren’t happy with how it was turning out, so we scrapped it and re-recorded pretty much the whole thing in a couple of weeks early this year. It took us a while to get all the overdubs and the mix done, but yeah it’s finally done and coming out! Some of the songs on there pre-date our last album Stepbrothers, some were written around the same time, but didn’t suit the vibe, and then one we learnt the day before we went in to record, so the songs are drawn from over like a two year period or something. Maybe that’s why it’s got a bit of a crazy/diverse/all over the shop vibe.

Tom, took the photo for your cover art? Is it true that the album name and cover had been decided on long before recording had even begun?

Yeah Tom’s an artist and takes a lot of amazing photos. One night we were backstage on this Cloud Control tour we were doing and Tom was editing photos. I saw this one pop up and was just like, ‘That’s it! That’s our next album cover and name’. I think the rest of the band thought I was kidding, but I was dead serious. Like a lot of Tom’s photos it has this dry sense of humour to it that I love.

Did you have the idea of Crazy Rack in mind once you did start recording?

Not really. We don’t really tend to think on things too much. We just sort of run on instinct. Personally, I feel when I try and push my creativity in a certain direction it just ends sounding forced and over cooked. I tend to just go with the flow and see where it all ends up.

How does it tie in to the album as a whole?

Umm, I guess the album is a lot more diverse than the last one. I mean, it’s still all guitar driven indie-rock, but I think there’s a few more curve balls. A few jangly numbers, a ballad, then straight up punk, then our attempt at writing a Cheap Trick song… So it’s a bit of like a crazy rack I guess. But the thing about the title is that before you see the picture you think of like a big pile of cocaine or a strippers tits, these like really stereotypical rock'n'roll images, but in reality I work in a second hand shop to pay my rent and keep my head above water. I think in 2015 playing in a rock band has a lot more to do with working a shitty job than it does with the sex and drugs myth. And I find that pretty funny.

How did this album compare to the last – was it easier/harder, carry any things you learnt from the first go round into this experience?

I think we’re just a bit more confident. There were songs we held back from the last album cos we were a bit afraid to show another side to our music and our band. But this time were more happy to just let it hang out and not be so concerned with every song being like an upbeat garage rock song, 'cause let’s face, that gets pretty fucken boring after a while.

Do you have a few go-to op shop garments for the tour life, and any op shop hot spots you can give away to readers? Conversely, if we’re pushing the op shop angle too much, tell us to go jump.

I work at a second hand clothes shop in Sydney called Cream, so I get a lot of stuff from there. Probably my best finds, or the ones that get the most comments are this sick Wayne’s World tee from when they were on Saturday Night Live and a Dr Pepper cap. It’s mental how many people have come up wanting to buy that cap off me. The op shops in Adelaide are actually really cool. We did some thrifting when we were there recently, and Charles, who was filling in on guitar on that tour, found a really cool The Matrix cap. I was pretty jealous of that, to be honest.

Did you guys have to get stunt doubles for your clip, Bad Apple? Some pretty gnarly shit going on.

Haha yeah we probably should have, then there might have actually been some sweet tricks in there. Although Dion pulls off some pretty wild moves. Our mate Spod filmed it. He’d had this idea for a while where he wanted to shoot a clip like an old school skate video, but the catch is that no one can actually do any moves. My best move was like a jump on roller skates. 100% lame, but I was still pretty stoked with that.

You’ve just wrapped up a pretty big Aussie tour with Last Dinosaurs, how’d it go – what were some of the highlights?

Yeah it was rad! Last Dinosaurs are lovely guys and it meant we got to go to a lot of places we can’t justify going on our own 'cause no one will come, like Canberra, Adelaide and Perth. The show in Sydney was at the Enmore and that is such a special venue to play. The stage is huge and the crowd were great. I won’t forget that show for a while. Also, we played a pretty mean game of putt putt in Perth. That was a pretty sweet highlight.

And we imagine you’re planning an album tour later in the year, any hints as some of the details?

Well Tom the drummer and I just learnt to synchronise my high kick with his cymbal crash. So expect a lot more showbiz. High kicks today, sychronised guitar moves and pyrotechnics tomorrow… 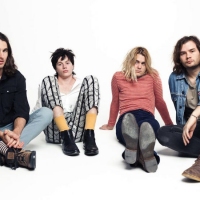 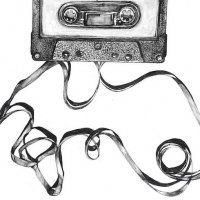 Listen: ISLANDIS - HomeSpawning from the ashes of New Navy, ISLANDIS' indie-pop debut is sure to impress.
Bands