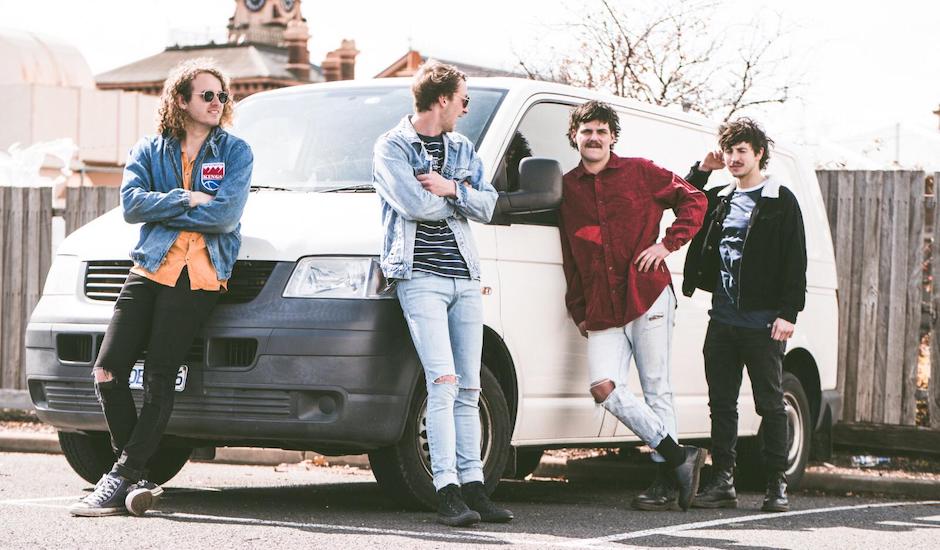 Drawing comparisons to names including Arctic Monkeys and The Strokes, The Paddy Cakes are a Melbourne-based four-piece doing very, very good things for the Australian indie-rock scene at the moment, bringing the energetic fun and liveliness of the aforementioned names and injecting it with a signature, more Australian indie-reminiscent sound for something we'd think you fall in love with. Over the last year or so, the group have been busy at work, releasing a trio of brilliant singles - last year's Tongue Tied and Hollywood followed up by this year's Depressing All - that flesh out their versatility and range as a band, setting themselves up nicely for the release of their debut EP Broken At Best, which premieres exclusively on Pilerats today ahead of its full, international release this Friday.

Broken At Best is glistening five-track display that encompasses every side of one of Melbourne's most multi-faceted local bands, channelling the energy and light-heartedness of their live shows on five uniquely different tracks that they worked on alongside Dylan Adams (DMA'S, West Thebarton, Skegss). There are moments that draw lines to their past work, capturing this Australian indie-rock sound not too far off what you'd expect from the other acts Dylan Adams has worked with, but there are other moments which feel like something new and exciting, leaning more heavily on their Brit-pop influences to create something different to much of what you're hearing in Australia right now. "We have been working on Broken At Best for a long while now. All the songs differ from each other in mood, style and even genre. Each song was written very individually, but still sit nice all together," the band say on the EP, which arrives ahead of an EP launch at Melbourne's Northcote Social Club on April 20th - more details HERE. "We worked with Sydney producer, Dylan Adams on this EP and I think he really helped us create our own sound that draws similarities to our favourite bands but with our own spin. We hope you like the first taste because we never stop writing new ideas. There is plenty, plenty more in the pipeline!"

Listen to the EP ahead of its release this Friday below, and while you do so, learn about its inner themes and creation with an EP walkthrough written by Dalton Tripodi (vocals) and Oakley Kerr (guitar).

DT: The opener to our debut EP! Hollywood has been around with us for a while now. We first played it live when we opened for New Years On The Hill just over a year ago now. It's got that sleazy sound to it and some really big riffs throughout. Lyrically this song is about going through a breakup, going out, trying new stuff again, and not really looking back. The perfect taste tester of what's to come!

OK: Probably my favourite song to play live. We've been playing it for over a year now, so it’s really come a long way. In the demo, I think the song went for around six minutes! We had this huge intro that we still sometimes play live. We really loved the name Hollywood because it's so far different from our home of Gippsland. We were actually going to name the EP after it too, but later decided with Broken At Best.

DT: This is our most dancey track. We love everything about it. It just bangs! When this was written, the three of us were all working at the time and took a couple of weeks off to go on a road trip to Splendour In The Grass. The band was just starting out and this trip really made us fall in love with the idea of being full-time musicians. The amount of inspiration I took out of this experience was next level, and I was ready to never work a 9 to 5 again.

OK: Can't be in a bad mood listening to this one! Daydreams slaps and is definitely our most upbeat song. I think this song came out of the Splendour Tipi forest at about 2 AM. I remember when we were trying to get some drums recorded for it and Jonah was in the booth trying to get the right snare sound. Dylan (our producer) worked his magic with some muffling and tape and all of a sudden we had this snare sound that suited so well! Dalton and I carried on like we'd just found gold. It was such a good experience working with a producer as professional as Dylan. He works so quick and always had us doing something. Never time wasted recording with him.

DT: The main lyric in the chorus "You don't even notice, the way that I cut my hair" is sarcastically quoting somebody. I can't even remember exactly who it was, but at the time I was longing for something new and to break routine. This was the last song we wrote for the EP and were still writing this in the studio as we recorded it. It's definitely a bopper!

OK: This one came out of nowhere really. We were still writing and creating part of this song as we were recording it. I remember we really wanted to add a tiny bit of octave effect on the guitar solo. We spent hours mucking around with these little details, but I think it turned out really well. This was definitely not our first choice for a lead-up single, and if you would have asked us in the studio, this would have probably been our least favourite song. But as it kept progressing, we really grew to it and I'm glad we had that extra day in the studio!

DT: A slower tune from us. I'm a big believer that less is more and I think this song proves it. I just love the tone of the guitar and how it cries throughout this song. It's very relatable to everyone I feel. It's about how there are two sides to every story, but that's not what everyone wants to hear or believe. A time when I was finding out rumours of things I've done before I would even go and do them. Bad Man. Bad Things.

OK: Big, Big song! I don't think I have a favourite song from the EP, but this is definitely one that gets played a little bit more at home. I really loved working on this one and think the chorus is some of Dalton’s best writing. I particularly love the final chorus after the bridge; Jonah changed the drumming slightly which I think makes it stand out from the others and adds a little bit of steeze. I often find myself air drumming to the end of this song and I can't drum for shit.

DT: I've always lacked motivation in my life for whatever reasons. I had these chords that I loved flying around in my head for ages but never really acted upon it. We had just locked in studio time with our producer Dylan Adams for the EP and we still needed a song or two. So pretty much forced to work on these chords and slowly but surely pieced together. The lyrics to this song were written when I was in a good state of mind.

OK: Probably our happiest sounding song... But this is the song we would often fight about the most. It changed a lot from our first demo and kept adding and taking different parts in and out. Sometimes it would feel like we were rushing this one and going around in circles, but I still remember Dalts showing us the lyrics and the vocals he'd written and I knew that he'd worked his magic again and we would get this one finished. It's a great ending to the EP when it fades out

Premiere: NZ's Mini Simmons drops the clip for Kids Off Broadway ahead of Aus tourThe New Zealand blues-rock four-piece will be coming our way this April. 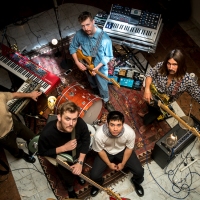 Introducing The Jensens and their new indie-dance delight, Mt MuraTheir breezy and light-hearted new single arrives with news that their debut album, Hyacinth Haze, will arrive later this year.
Bands