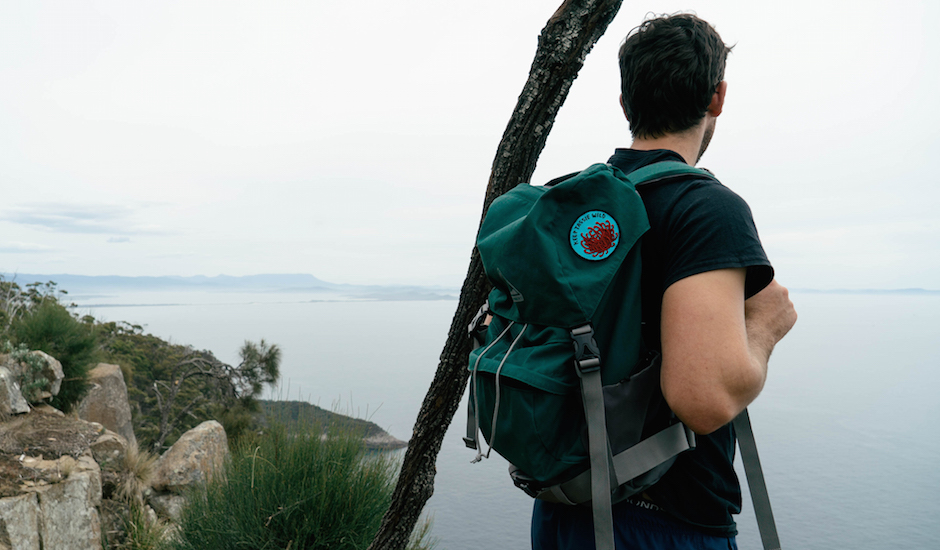 Tasmania seems to be the flavour of the month. In the year ending December 2016, the total number of visitors to Tassie was up 17 per cent on the previous year – which reflects an upward trend over the last five years. The undeniable catalyst for this increase has been the prolific effect of MONA’s arrival on the shores of the Derwent River.

Tassie has long been a destination for the adventurous of heart. We are inspired by other-worldly landscapes in the World Heritage Area; places like Lake Oberon in the Western Arthurs or the imposing white quartzite peak of Frenchmans Cap. The Franklin River was forever immortalised in Australian environmental history by Peter Dombrovskis with his photo of Rock River Bend: 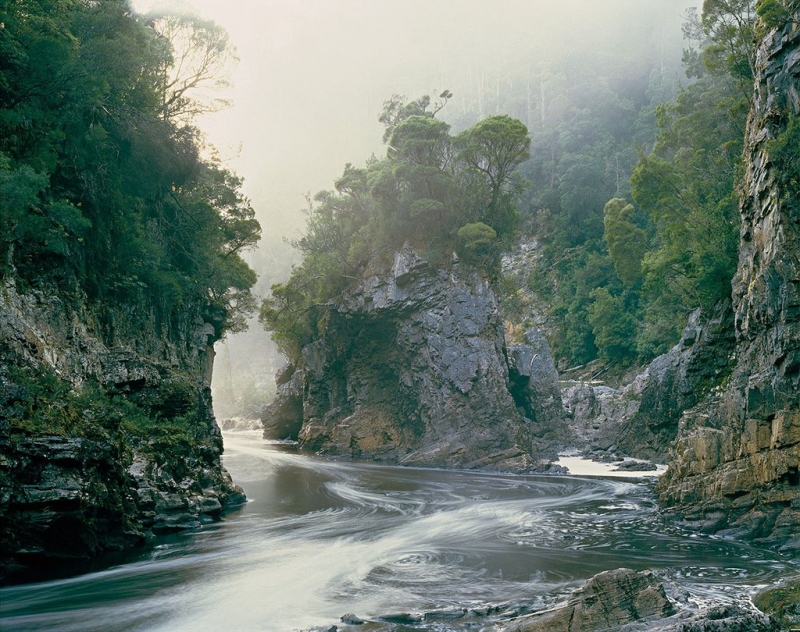 Tasmania lures hikers and rock climbers, paddlers, kayakers and surfers alike to the wilds of this truly magnificent island. Tasmania is home to one last tracts of true wilderness left on Earth – a landscape that was left relatively untouched by European settlement – outside the realms of encroaching development and ‘progress’. First Dog on the Moon puts it perfectly:

It is just crap enough to keep people away. As Greg our host said, “If there was anything good here, there’d be apple trees and cows and a four-lane highway leading to a small city.” But there isn’t. It is a remarkable piece of the world, and you should see it if you can. I did.

First Dog raises an interesting point. People should see these areas, but in what capacity? Do we need to put significant infrastructure in very environmentally sensitive areas? As a bushwalking tour guide myself, I’m admittedly a little conflicted about Tassie’s future direction, especially in relation to tourism development. Should Tasmania follow the New Zealand model and push further into wild areas to secure more tourism dollars? Where does the development end? Where is the line drawn? Do we need a better framework for preserving the beauty and importance of these landscapes and ecosystems?

I’m about to leave Tasmania for a three-year journey of my own, and the last few months have been filled with nostalgic thoughts of my second home down south. I decided, as a writer, that it was time to talk to some of the people who are interested in the future of Tasmania, the Tasmania that our children will inherit. What kind of place do we want it to be? Over the next few weeks I’m going to talk to some of these people – some are Tasmanians, many more have been drawn here by the undeniable beauty of the land and the friendly nature of the people.

Josh Pringle is just one of the untold numbers of people who have truly fallen in love with Tasmania’s wild places. He decided to start a business and use his skills as an artist to raise awareness about Tasmania’s wild places. I first saw a ‘Keep Tassie Wild’ sticker plastered on a light pole in South Hobart in November. In the six months since, these stickers have proliferated around the city. The matching patches, with gleaming Tasmanian Waratahs, are a regular sight on the backpacks of most tour guides. People wear ‘Keep Tassie Wild’ shirts with a sense of pride.

I spoke to Josh about ripper flowers, wilderness, and putting people back into tents when they enter wild places. Here’s what he had to say:

So we better sort out the important stuff to start with. Are you a native Tasmanian, or a mainlander?

I’ve lived in Tassie since I was three. But yep, I’m just a blow-in from NSW originally.

What do you reckon is the most common misconception about Tassie?

It’s always cold and there ain’t much happening. It’s all relative I guess though ey!

Where were you in the Tasmanian wilderness when it truly blew your mind for the first time? Was there a particular moment in time or event that cemented its importance in your mind?

I’ve always bushwalked and loved the bush but I guess if I had to find a particular time that really cemented its importance to me it would be around when I started trying to learn the names of the plants I loved. I heard somewhere that to feel at home in nature is like a community, the more of your neighbours’ names you know the more you feel like you belong. So, once I started giving more of my time to the plants I felt like a whole other world opened up within the places I’d always loved.

IF you could pick five words to (attempt to) convey the beauty and importance of the Tasmanian Wilderness World Heritage Area (TWWHA), what would they be?

I couldn’t! Maybe something like Best. Ever. Awe. Inspiring. Nature.

What is ‘Keep Tassie Wild’ all about?

Keep Tassie Wild is a little business I started with the aim to raise money and awareness for the many amazing places in Tasmania. I donate 50 per cent of the profits to local charities that help protect those amazing places.

Essentially it is my way as an artist and illustrator to give back to the places I love. I felt I wasn’t doing enough to stand up for the beautiful and precious places around Tassie and figured that my art would be a good avenue to raise awareness and funds. I get a lot of inspiration from the bush, so it feels good to be part of something that hopefully makes a difference in preserving it for future generations.

Some of those profits go to the Bob Brown Foundation and The Wilderness Society. Is this money intended for any particular projects?

Nah, but it does stay in Tassie. I’ve heard of instances where it’s the cute and iconic things that receive money over equally important but not as glamourous things, so I leave it up to the pros to decide how to spend the money.

You’ve chosen an endemic Tasmanian flower, the Tasmanian Waratah, as the emblem for your campaign? Any reason in particular for choosing the Tah? (apart from the fact it’s bloody beautiful!)

It’s always been a family favourite and It’s just a bloody ripper flower! 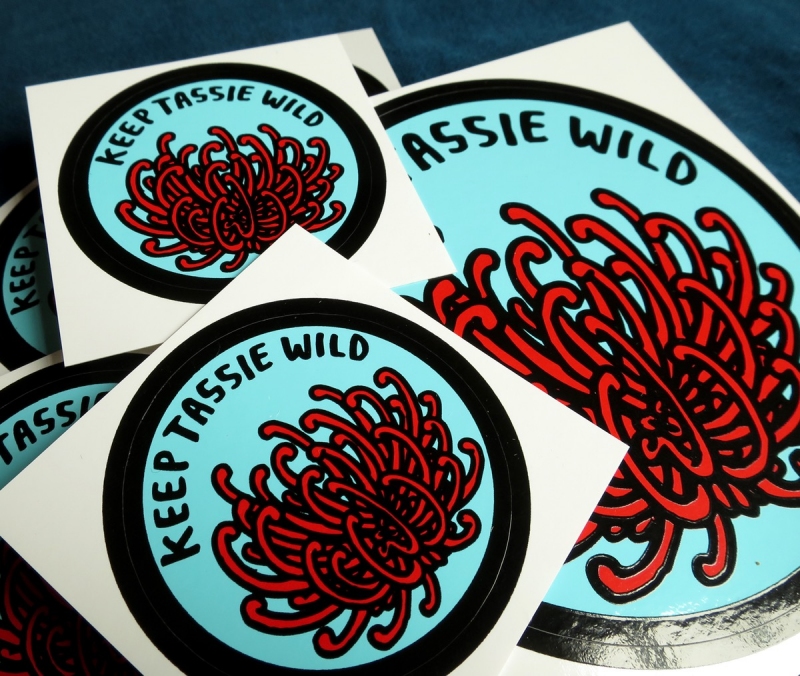 Without wanting to oversimplify, many people choose to frame the debate around tourism development in the World Heritage area by pitting accessibility against the protection or conservation of the wilderness areas. Do you think this is accurate?

Sort of but I guess it just ain’t that simple. I guess the first point is I don’t trust this Liberal government to put the environment first in all of this, which I think is paramount. It’s difficult to talk positively about some elements of the debate because it is a very real possibility that each step towards more access to our wild places threatens to open a floodgate of development. It is a fine line. It’s said that people need to experience nature in order to want to protect it, but at what point does allowing people in ruin what is there? That’s why I’m stoked to give money to The Wilderness Society and the Bob Brown Foundation because these people know what they’re talking about and fight hard to protect what we have. I guess for me, I feel we should be pushing people into tents rather than pushing for lodges and these elaborate ‘huts’. So access isn’t the real issue, it’s how you achieve it. It just makes me sad to walk past buildings when I want to be in the wild.

I looked up a number of definitions of ‘wilderness’, and most speak to the idea of a landscape that is untouched and unaltered by humans. In the case of Tasmania, we know that not to be true, as Tasmanian Aboriginal people were influential in shaping the landscape we see today for thousands of years. Do you think there’s an issue with conceptualising wilderness in this way?

Yeah, I do. I think having a solid definition of ‘wilderness’ is so important and it is a far more complicated issue than it seems at first glance. I’ve been to a talk or two where they discuss this exact point. How can we protect wilderness if different sides don’t agree on what it actually is?

The most obvious element of wilderness for me is distance. To me it seems ridiculous that you could put a road into a wild place or a lodge on a mountain and still call it wilderness, regardless of whether the remaining vegetation is left untouched. But for other people there are other points that are far more important. It’s definitely worth talking about.

Do you think people will fight to protect something that many of them have never seen, and may never see?

Yeah I think so. The power of knowing something exists regardless of whether you’ll ever get to see it is pretty strong. There’s something so nice about knowing there are pockets of the world that remain as they have been for centuries or millennia, and I think people respond to that. 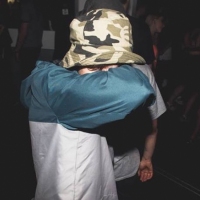 Someone made a documentary about Perth rinsing and youth culture, and it's really fkn bleakStreetwear, drugs, graff and funny dancing. 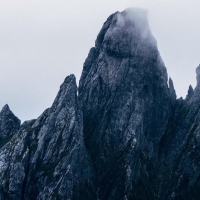