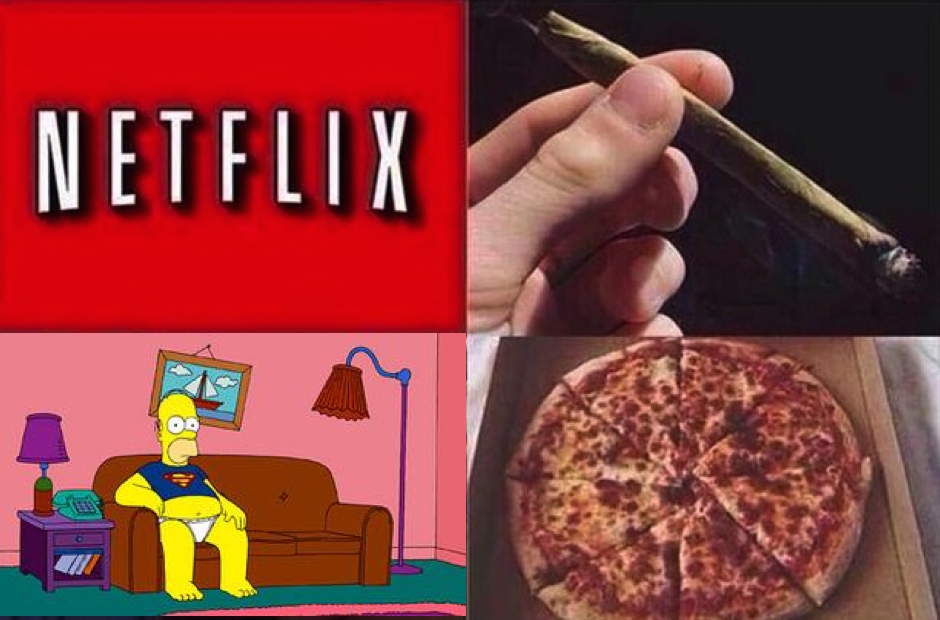 For years, 'want to come over and watch a movie?' has been a guy’s thinly veiled method of getting girls to have sex with them. Some real cheeky ones even try to persaude gullible girls that they have a secret soft spot for The Notebook - so much so that they even have a cheap Bali copy of it at home. Oh, and their place is basically around the corner too (just a short 25 minute walk and then a half hour drive).

Well, now its 2015. Nobody can say 'hey wanna come hang out and watch a DVD?' because nobody has a DVD at home (nobody, that is, except for that person you know that still has 300 DVDs at home because they went nuts on ex-rentals when all the Video Ezys went bust). But it's okay, this does not spell the end for getting laid under false pretenses!

Because we have this thing. It starts with a guy or girl asking their love interest (generous wording, there): 'So hey, this week has been crazy, do you want to just come over, watch Netflix and chill?' How did they know you’ve had a crazy week, and doesn’t that sound nice. There's some shitty red wine and talking in the kitchen. Then you carry your wines over to the couch, get a movie on Netflix fired up, you maybe throw out a “So I’ve heard this movie is supposed to be…” and – boom – suddenly you’re both a hot, sweaty, naked, mess, and wondering if you should order pizza. Welcome to Netflix N Chill. Where somehow pretending you’re going to watch Netflix makes things way less awkward, even though everybody is down with this code shit.

The memes are strong with this one. Of late, fuckboys everywhere are really delighting in the Netflix N Chill thing going viral: just watch their faces light up like kids at Christmas as they post jokingly homoerotic memes on each others' Facebook walls, as the females in their shared networks scroll on with boredom. They mostly depict individuals who have unknowingly become the target of an awkward act of seduction, with an ironic caption ‘I thought you said ‘Netflix N Chill?’: 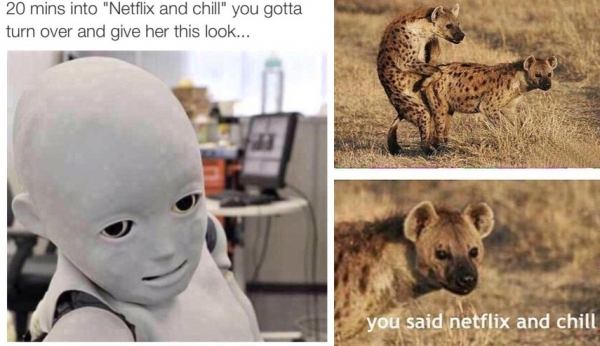 There is even a fake Netflix N Chill story that did the Internet rounds, about a US mother suing Netflix $US50K because her 16 year old daughter got knocked up during a session because "Netflix is boring”. She’s right. However, with nearly 10,000 films and TV shows on Netflix, you could be infinitely scrolling through that menu forever and never even get to the Netflix watching bit, so it’s important that if you’re planning a session, that you know exactly whereabouts in the menu the most boring films of all time are. That way, as the two of you touch fingers as you take turns toggling the remote, your guest thinks that you’re both searching for the  ‘perfect’ movie that ‘neither of you have seen’, but you’re actually gently steering the selection towards content that will ensure your unassuming (probably very assuming) guest is driven to distraction minimum half an hour in. What you need is some kind of movie that made so little of an impression on you, that you compeltely forgot it even existed, until you saw it appear on the Netflix menu. Below are those movies. Goodnight, and goodluck.

NEW YORK, I LOVE YOU

10 shorts (sorry, “arty vignettes”) randomly thrown together (so, no clever Babel-like woven plots) about “New York life” filmed by 10 different directors. It’s rammed with generic brownstones and skyline shots but other than that doesn’t really seem to have too much to do with New York at all. Rachel Bilson, Hayden Christensen, and Orlando Bloom are all in it, acting with less depth than a deep dish pizza. Frankly, if you make it to Part Seven - where Shia LeBeouf plays a handicapped Russian bellboy - and your guest hasn’t even gotten a little handsy, it’s absolutely time to send them on their way.

The worst thing about this “dystopian science fiction action film” where it’s the year 3000 and Klingon-rip off aliens are fucking shit up for humans, is how ridiculous and stupid everyone looks, but how straight-faced they all remain throughout. Like, John Travolta is taking his job playing a giant dreadlocked alien VERY seriously. Forest Whitaker rock-bottoms it as his main henchman. Together, they jump through badly constructed sets in giant boots and the whole thing is filmed from weird slanty angles. There’s not even an underlying social message, no interesting science fiction allegories about life etc…it’s junk. We hope you have someone better-looking than Travolta to 'Klingon to' throughout this.

Maybe the worst movie ever to star Will Smith, who plays a man who is very sad because he was involved in a road crash which killed seven people. He lives in a motel room with a poisonous jellyfish as his only company, and is ready to unleash jellyfish fire upon himself at any second if the going gets too tough. He finds seven people with serious problems and tries to help them out, in a kind of screwed-up version of Pay It Forward.

The movie wants you to think its very profound, but it’s just super phoney. We’re used to Smith trying to save the world in movies, but there’s more heaviness than heroism in this one. If you want to look like an even more exceptional Samaritan than Will Smith’s character in Seven Pounds, take it upon yourself to save the person next to you on the couch from this dreary drama. If you’re lacking confidence, take some advice from Will Smith’s other character, love coach Hitch, and just go for it: “just remember, she's already out (/on the couch) with you. That means she said yes when she could have said no… So that means it's no longer your job to make her like you. It’s your job not to mess it up.”

Generally, if the description of the film says “ensemble cast” and it’s not The Big Lebowski, you’ve got a Netflix N Chill winner on your hands (see also: Valentine’s Day). In New Year’s Eve, it’s New Year’s Eve (duh) and a bunch of bland characters are scrambling to make it to Times Square on time to see the ball drop, to make the ball drop (that’s Hilary Swank’s job), to have a baby before the ball drops, to not die before they get the chance to watch one last ball drop. By the time Bon Jovi starts singing, your guest will be positively begging for you to lay them down on your "Bed of Roses".

The plot (believe it or not) involves two black cops (comedy bros Marlon and Shawn Wayans) who go undercover as wealthy white girls (wearing creepy weird white prosthetics like Tom Cruise in Vanilla Sky) in an attempt to solve a kidnapping. If you can get past the toilet humour and clunky plot, what’s left is a racist nightmare, topped with thoughtless sexism. Shitty gags = your guest gagging for it.

Halle Berry is just a regular chick until one day she grows claws and realises her reflexes are pretty above-average then boom, now she’s the fiendish feline Catwoman. There’s also a plotline with a villian (Sharon Stone) who sells anti-aging cream that disfigures women…and not in a slapsticky funny Death Becomes Her way. Halle Berry overacts (her costume isnt even sexy), her character is pretty far from being related to anything Batman, the CGI sucks… UGH. Whatever other pussy is in the room will be 100% more interesting than this one. 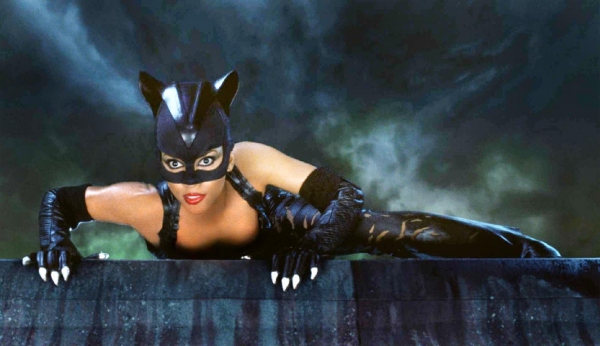 You can’t really expect much engrossing violence from a PG 13+ movie – even when Jean-Claude Van Damme and his skills in martial arts are involved. This forgettable video game adaptation tanked for a lot of reasons, one of them being that they filmed in Bangkok, and Van Damme couldn’t focus because he was too distracted with massage parlours, cocaine and 'beautiful lovemaking' (his words, not ours) with co-star Kylie Mingoue. You may not have Van Damme’s muscles, but you do have Street Fighter playing on Netflix. Ask yourself, what would JCVD do in this situation? 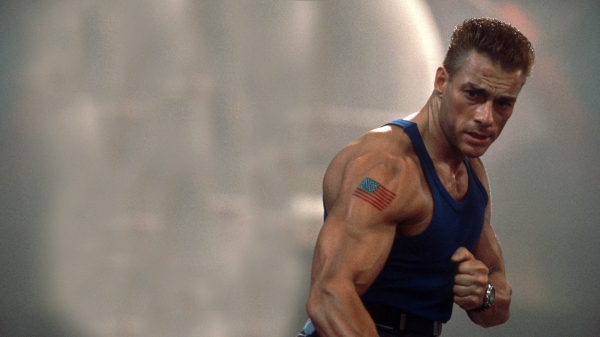 This list was in no way brought to you buy Netflix. 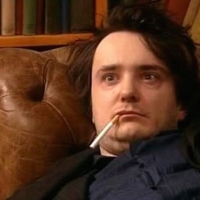 A handy guide to being hungover in BrisbaneCarpe damn your head hurts but don't let it stop you! 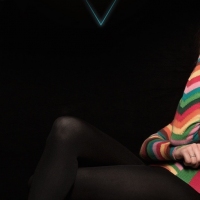