When people say “trust me” to try to convince me to do something, my mind does this Tina Belcher-esque moan and tells me to not trust that person at all. HOWEVER, I would greatly appreciate it if we could, for one moment, put that aside because all I really want to say right now is “listen to this guy’s music, just trust me on this”.

Twenty year old Melburnian producer LUCIANBLOMKAMP (or Lucian Blomkamp if we’re getting personal - who’d have thunk it) recently released Help Me Out, the first single from his debut album titled Post-Nature. It’s a dark and textured track, and just as emotive and intricate as his previous releases. Lucian was kind enough to take the time to answer a few questions for us. You can read his answers here. See, it’s an interview. That’s what an interview is. Anyway, press play and read on.

I see you play violin (and well, might I add). Do you play any other instruments? How did you get into making music?

I also play guitar and I try my best to mess around on as many other things as I can. I think after solely playing violin for such a long time, merely recreating something that had already been done before became something that just wasn’t enough for me. Obviously this is isn’t the same for everyone. I only really feel I’m truly expressing myself creatively when I’m either composing or performing something I’ve made. I didn’t really realise this when I was much younger. I suppose classical music is especially brutal when it comes to having to recreate a composer’s initial intentions to a tee. Any dynamic/textural/phrasing/fingering variation or whatever is pretty frowned upon. “Do you think you know better than ‘said composer’?” is a very common line to hear. I guess that whole concept kind of scared me off and is what indirectly introduced me to writing in the early years (before I started producing). From there things just kept evolving until the point where merely having to settle with the sounds I could make through physical instruments wasn’t enough. I wanted to expand and producing allowed me to do this.

How would you describe your music?

Maybe bass-driven ambienty melancholy music? It seems like such a cop-out but I genuinely struggle to give one definitive answer. I like to think that most of my songs revolve around ambient sounds, no matter how subtle they are. I mean obviously my music is really far from being classified as ‘ambient music’, although I feel as though it’s what give my songs a bit more of a human feel. With every song I try to create a different space, a different experience, and I think these subtle environmental sounds are what make the big differences. Whatever genre, style or experience I’m trying to capture, that’s almost always the main thing that’s going through my mind.

Your debut album Post-Nature is set to be released next month. What’s different about this release compared to your EP?

From the second I started making the first song for Post-Nature, I I knew what direction and message I wanted to have behind the album. I wanted each song to have its own flavour and give the listener something fresh to listen to with every new track, while still remaining personally sincere and expressive. This process is pretty much the complete opposite to the creation of my EP. I wasn’t even planning on releasing the songs as an EP until they were all finished and in front of me. I suppose this element of spontaneity is good to have in one’s music, although I feel as though the new sound behind Post-Nature is much more appropriate for me and allows me to be far more happy with the end result.

What have been some highlights of the year so far, and what are you excited about for the second half of 2014?

The first half of 2014 has been quiet, although in some ways I’m happy I have had this time to breathe. It’s allowed me lots of time to improve and I feel far more confident in myself as a producer due to this time alone. I think this is what will make Post-Nature and my following releases something really special. Besides from that though, the rest of 2014 is looking exceptionally bright and I’m over the moon to see the plans that are already starting to come together since the release of Help Me Out.

What music do you listen to?

It’s funny, the more and more I’ve gotten into creating music, the less and less I’ve listened to other music. I feel as though everyone listens to music to live and experience something that they can’t usually in their everyday lives. Having the privilege to be able to create something new allows me to experience whatever I want, whenever I want. So in that way I don’t feel too weird about listening to less music. Most of what I do listen to though is just what I’ve been listening to for years though. Such as Why?, Radiohead etc. I am having a huge phase with Street Talkin by Slick Rick at the moment though. Too groovy to ignore.

What do you think is the most important component when it comes to making music, or just generally doing anything creative?

Sounds cliche, but definitely staying true to yourself. When you’re constantly being bombarded with other people’s opinions on music, genres, production style, trends (or whatever), it can be difficult to find your own voice knowing that others may not appreciate it. Your own opinion is more important than anyone else’s. As a creator, falling into the trap of following what your friends enjoy is really dangerous. I think this issue goes deeper than that though. More often than not I think if one follows their true voice they will find something that has never been done before. Staying truly neutral and forgetting about everything you’ve ever heard about what makes a ‘good piece of music’ is crucial. I say this as though I have all the answers, although I obviously don’t. I’m just trying to find my voice.

Do you have a particular aim, music-wise, for what you’d like to create in the future?

Not really. As I said before, sincerity is really a big focus for me. I think putting as little thought into the future evolution of my music is a good thing. Hopefully it’ll take me to good places. If not, I’ll still be doing what I love. It’s a win/win.

LUCIANBLOMKAMP’s debut album Post-Nature is due to be released on August 15th. You can download the first single Help Me Out for free here and find even more music on his Soundcloud. 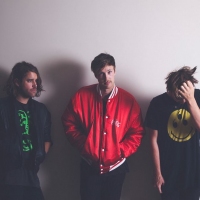 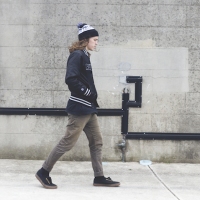