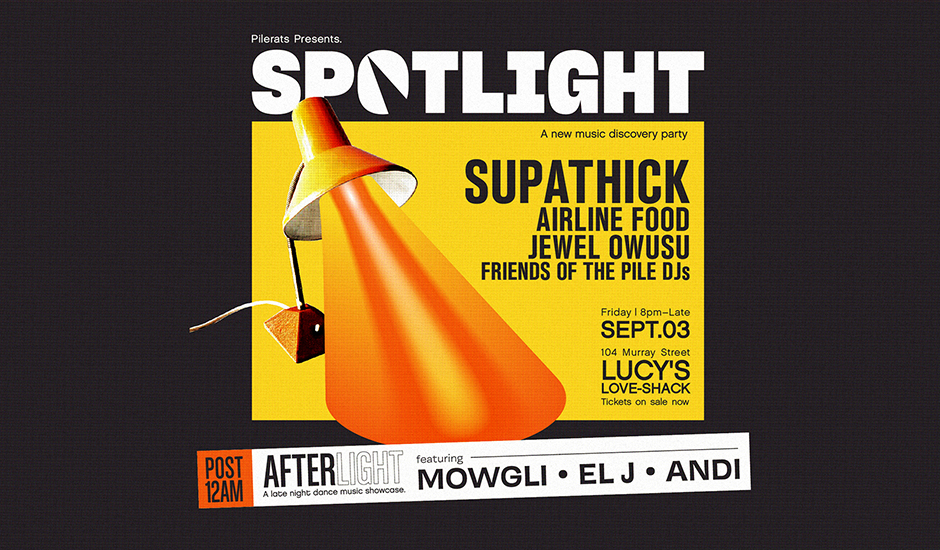 Posted By Pile Rats 1 year ago

After a turbulent past 18 months for live music in Western Australia, we're not wasting any more time and getting straight back into it with the launch of SPOTLIGHT, a new monthly music event series that we hope will connect the next generation of musicians with their new biggest fans. It's something that's been stewing for much of the last few months - through lockdowns and everything - and now, we're stoked to welcome the final version of the series with its debut show this September, going down at Lucy's Love Shack. Here's everything there is to know:

SPOTLIGHT is a new music discovery party hosted by Pilerats, kicking off next month (September). The idea is to create a place of music appreciation; a place where people can come down and discover their next favourite artist, or fall in love with a new band they maybe didn't know was out there. It's all about spotlighting the next generation of talent (hence the name), uplifting them within Perth's live music scene with the knowledge that one day, they're bound to be one of West Australia's dynamite exports - an act that everyone will not be able to get enough of.

It's all about mixing genres and mixing sounds, connecting artists over their shared appreciations or excitement rather than the genre of music they play or the type of crowd they attract. It's something that's going to change month-by-month too; one month there might be funk and hip-hop; the next R&B; the next punk and experimental electronica; the next indie-rock. Who knows? It's something Pilerats is all about, and it's something that we hope to bring to the table with SPOTLIGHT too.

So, who is playing the first one?

The first SPOTLIGHT event is full of some of our favourite West Australian artists of the last year. They're all people that we can't get enough of, and we're sure you're going to love 'em.

First off the bank is Supathick, the funk group whose wind-swept and care-free funk/disco/pop/jazz/R&B/soul mix has soundtracked much of our last year. They've got one of the most consistent discographies in Perth at the moment, from their debut EP Dinner and a Film - which brought Supathick together with guests including Your Girl Pho, Hyclass, Kaitlin Keegan and more - through to singles that have littered the last few months, including the Adrian Dzvuke-assisted July and the Keely Brittain-featuring Time.

Supporting them is Airline Food, whose sprawling electronica would feel plucked from the 80s and 90s if it wasn't for how they turn these sounds on their head and give them a modern-day edge. The band contain some of Perth's most dynamic musicians, and their dancing synth fits perfectly in the atmosphere we want to create. We've also got Jewel Owusu playing; a newcomer to Perth's R&B world whose rich sonic palette has seen her blossom into one of 2021's most incredible new acts. She's one of West Australia's most promising and potential-filled additions, and we can't wait to see what she has in store.

What are the other deets? Where is it happening? How can I get tickets?

SPOTLIGHT will run on the first Friday of every month (for the most part), with the first one - starring Supathick - going down at Lucy's Love Shack on September 3rd. To start, they're going to feature all WA talent - but who knows what the future can hold?

In terms of tickets, you can grab 'em right here via Oztix. They're going for a tidy $20 including booking fee, with all tickets including entry into SPOTLIGHT and AFTERLIGHT, the late-night after show.

Surprise! SPOTLIGHT isn't just one show; it's two. AFTERLIGHT is the late-night partner to SPOTLIGHT, starting at midnight after the main show and running 'til they turn the lights on us. It takes the discovery angle of SPOTLIGHT and gives it a more electronic focus, centring on the producers, DJs, crews and collectives uplifting Perth's dancefloors and the wide-ranging versatility that live amongst them.

We're going to be bringing on crews and collectives to grow AFTERLIGHT in the future, but for the first event, we wanted to highlight some of talent we've been discovering over the last 12 months. Kicking off straight after Supathick, we're stoked to welcome the first instalment of AFTERLIGHT featuring Mowgli, ANDI and EL J - three producers/DJs doing some exciting thing in Perth's production world at the moment.

Who are playing the future shows?

We can't tell you just yet. In saying that, we've built out a little SPOTLIGHT playlist featuring the types of acts we want to highlight through the series. Who knows, maybe you'll be seeing them on our line-ups over the next few months?

All we know is that for the meanwhile, SPOTLIGHT will be all about West Australia. Hopefully one day soon we'll be able to welcome interstate and international guests to the SPOTLIGHT alumni.

SPOTLIGHT 001 is at Lucy's Love Shack on September 3rd, featuring Supathick, Airline Food, Jewel Owusu, Friends of the Pile DJs, Mowgli, EL J and Andi. Grab your tickets here and see you there - it's going to be a damn good time. 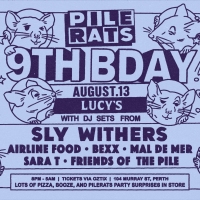 Pilerats is turning 9, and a bunch of 10/10 legends are DJing our partyCome celebrate on August 13th at Lucy's Love Shack, with a tonne of close pals and special guests. 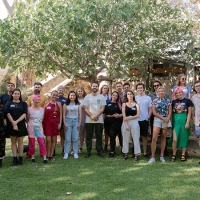 Sound States, West Australia's music industry mentorship program, is back in 2022After a successful debut year, the three-day program re-launches in February 2022 to empower an entirely new class of music managers.
News