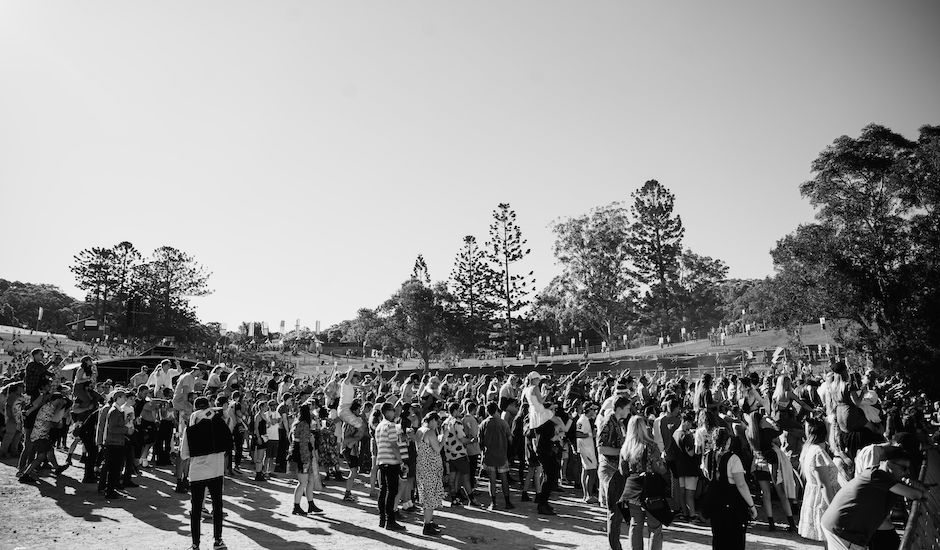 Header image by Pat O'Hara, from Splendour In The Grass 2019.

One of the Australian music calendar’s biggest dates is the announcement of the forthcoming Splendour In The Grass lineup, and there’s a reason for that. Splendour In The Grass is without a doubt Australia’s biggest festival with presumably Australia’s biggest festival booking budget, and because of that, they’re often able to grab the year’s biggest festival headliners and an incredibly strong undercard to support them. In terms of its space in the Australian music world, you’re often able to predict which bands are going to have explosive years based upon their position on the lineup’s smaller font: these are the acts people will be keeping an eye on, and who’ll probably feature on the lineup in larger font across the years to come.

In 2020, Splendour will celebrate their 20th anniversary; a remarkable feat, considering the death of many festivals that could contend Splendour for their title a few years back (Big Day Out and Soundwave particularly). As such, many were expecting a lineup to encapsulate everything Splendour has become known for over the years: supporting Australian talent both at the top and bottom of their lineup poster; bringing over long-time favourites that have defined the festival’s indie-adjacent taste; forward-thinking visions in the worlds of international rap, dance, pop and rock.

You can’t say that their 2020 lineup didn’t deliver that. This year, the festival will be headlined by Flume, an electronic juggernaut who stands among Tame Impala as one of the country’s biggest musical exports in the modern music world; The Strokes, a favourite of Splendour who despite indie-rock’s constant shifts have somehow remained relevant; and Tyler, The Creator, a somewhat monumental booking - if he hadn’t just been here, that is - that captures one of music’s most boundary-pushing and celebrated names in the last year.

However, the reaction to the festival’s lineup arrival online has been divisive, to say the least. Some expected more - it is the festival’s 20th anniversary after all, and it’s hard to not get your hopes up with names including Lana Del Rey and Travis Scott floating around the rumour mill in the lead up to the lineup’s arrival - while others targeted its gender disparity; despite this year’s lineup including less males than ever before, its three big acts remain male-dominated. The latter is something that Splendour organisers even spoke about themselves: “I’m 100 per cent committed to supporting women in any way I can,” said the festival’s co-founder and producer Jessica Ducrou. “But I do think there’s a difference between filling a quota to placate the critics and booking what’s right for the festival.”

The problem Australian music festivals are facing now is that most of them are just becoming recycled lineups of every other festival we put on. Like the splendour lineup is fine, it’s acts we’ve all seen multiple times in the last couple years at other festivals

One other complaint - one that’s been the most vocal across many threads regarding Splendour’s 2020 lineup - is an old favourite of ours: the lineup is all a bit same-same to the rest happening in Australia. “Sad they can't get new acts, looks like Splendour will never be the same,” wrote one commenter on its lineup announcement. Another says “you can’t tell me Tyler and Denzel [Curry] are the international headliners after they toured here this summer…”

But, now that the dust settled and we’ve had a proper deep dive on the 2020 lineup, is it actually all the same stuff?

Starting at the headliners, it’s clear why people aren’t too keen on this year’s event. Even without the rumours promising a Rage Against The Machine reunion (which Splendour, for the first time in recent memory, debunked on being on the lineup before its announcement), the top-end billing feels a little repeated from the years gone. The Strokes and Flume actually both headlined the same year back in 2016 funnily enough, and in the time since, Flume has gone on to headline Falls Festival and Listen Out too. The Strokes, meanwhile, haven’t played an Australian show since, and their 2016 Splendour slot was also a festival-exclusive. Tyler, meanwhile, almost broke social media last year when he was announced for new Brisbane festival Wildlands, and again when he was announced on every other festival bill that would make up his first Australian tour in five long years: Origin Fields, Beyond The Valley and Field Day.

In fairness, it’s clear why all these acts did make it on the bill. Flume has come leaps and bounds even since he played Listen Out last September, and with new music on the way before Splendour’s arrival, there are no doubts it’s going to be a special moment. The Strokes, meanwhile, are alt-rock pioneers who have a new album under their belt too, while no-one really knows if Tyler, The Creator has new music to arrive before July, but in the month since he was last here, he’s had success after success after success: a monumental GRAMMYs performance (and award win), and a win at this week’s BRIT Awards just the start.

However, in a time when the music world gained so many potential headliners - including a lot of women, too - it kind-of feels like a job-half-done situation.

Maybe expectations were too high, but this Splendour line-up is really lacking the wow factor for me.
Flume and Strokes both from 2016 and where’s the female headliner?!

Dive deeper into the lineup, and it’s clear that this argument of lineup recycling is both right and wrong. All up, 46% of this year’s lineup is shared with other festival lineups from the 2019/2020 festival period, up slightly from last year, where 37% of the lineup was shared. However, much of this crossover across in the lineups Australian bulk in the middle, with the top lines of each day relatively clash-free (only Violent Soho, Denzel Curry, Dom Dolla and Sampa The Great have played other Australian festivals in the last 12 months, and Violent Soho’s performance was exclusive to that festival).

When compared against 35 other festivals - including Splendour’s 2019 bill - Splendour In The Grass’ 2020 lineup sits somewhere in the middle of festival uniqueness, exactly on par with the national average - also 46% - and higher than Laneway, Falls Festival and Beyond The Valley in the year just gone. In other words, there’s an argument that Splendour’s lineup is fairly recycled from other lineups in the year just gone, but it’s a problem unspecific to Splendour and therefor, something that’s probably a larger going-on outside of their hands - a remarkably average Australian dollar, for example, making it harder to convince international artists to play in Australia when they could find more money elsewhere.

There’s also a lot of goodness on Splendour’s 2020 lineup that you couldn’t find on any other festival grounds across the last twelve months. The Yeah Yeah Yeahs haven’t been here since 2013 (!) and Midnight Oil have their new project with Indigenous musicians, plus the growing list of solid internationals that make Splendour stand out this year: Mura Masa, King Krule, IDLES, King Princess, Tierra Whack, GEORGIA, The Big Moon, Muna, Miss June and so on.

Splendour in the Grass lineup is in! This year, we reckon the highlights are in the smaller names: Hooligan Hefs, @whereisMUNA, @SlyWithers, @thebigmoon, @jarreauvandal, @_georgiauk, @cry_club. Thoughts? Who are you keen to see? pic.twitter.com/o80IquGDGY

At the end of the day, a lot of this festival crossover lies in Australian artists, and that’s something that doesn’t look set to change anytime soon. As the Australian dollar continues to decline in value, festival bookers are constantly having to refer back to the plethora of talent back home to beef up their lineups; even small gets from international waters often doubling in price the second you add the conversation rates to Australia.

Because of this, it may feel like the same few acts are finding themselves on festival lineups year-in-year-out: DMA’s, Ruel, Dom Dolla, The Jungle Giants, Cub Sport, Sampa The Great, Thelma Plum, G Flip and so on are finding themselves spread across even half a dozen lineups this year, including Splendour 2020. However, when tasked with booking Australian acts to beef up your Splendour lineup, why wouldn’t you go with names like DMA’s and The Jungle Giants (who both have new albums on the way, presumably before or around Splendour) or Ruel and Cub Sport, who off the back of their latest work, have grown in size exponentially since Splendour this time last year.

Maybe instead of throwing your arms up and complaining that The Jungle Giants are on their 20th lineup this year (they’re not, Splendour is their second major Australian festival since this time last year), why not put that energy into getting a few other Australian musicians to grow just as big? That way, Splendour - and every other Australian festival - will have a few more acts to choose from every year, and this same-same lineup recycling will no longer be a thing.

Splendour In The Grass 2020 Lineup: 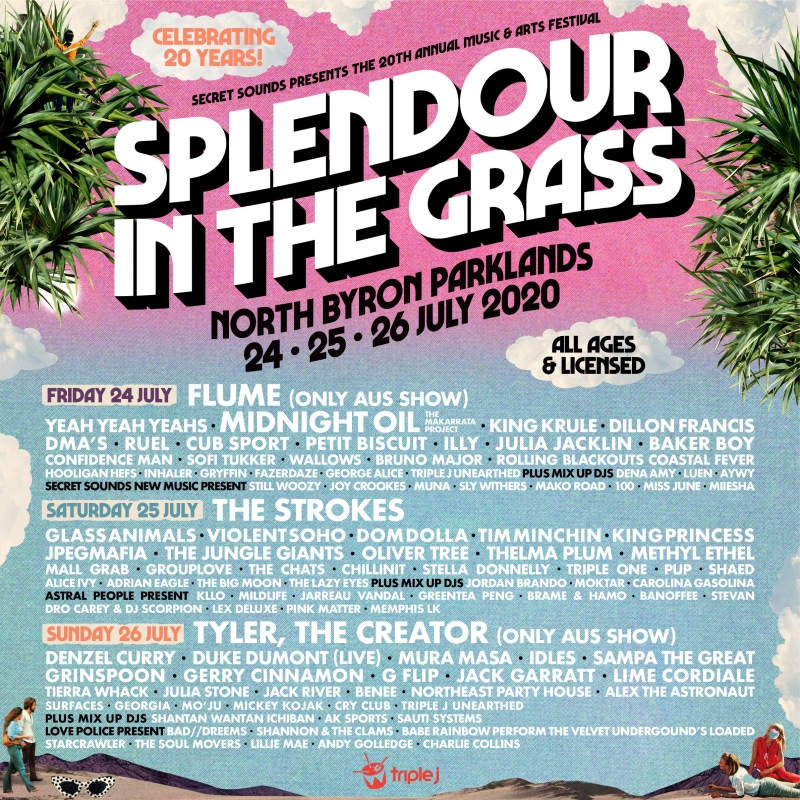 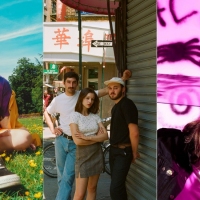 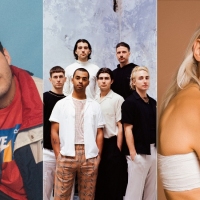