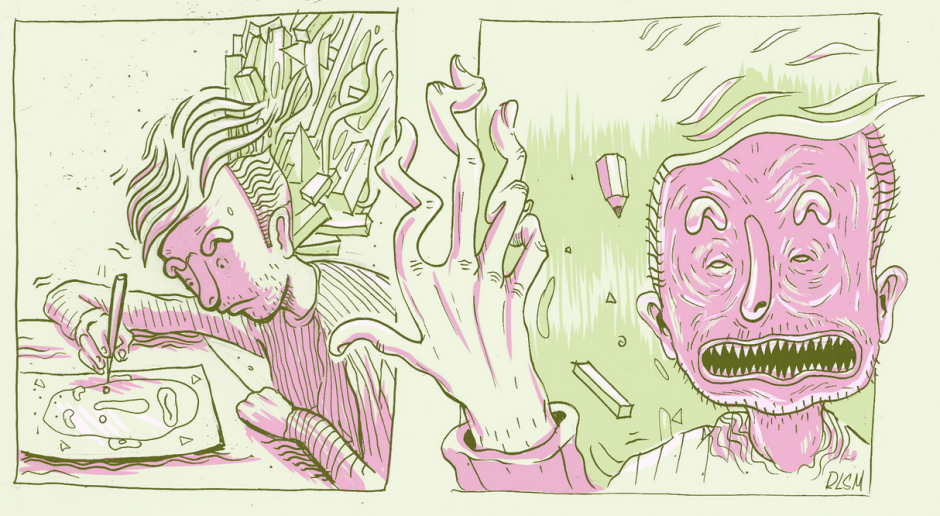 Chatting with the artist formerly known as RLSM.

One of our favourite local artists took the time out of his schedule to have a chat with us, and we're pretty stoked about it. This little interview has been in the books for a while, and we thought it high time to introduce you to multi-disciplinary creative Sam Shields, formerly known as RLSM. His practice is far too versatile and absurdly awesome to pigeonhole, so we'll let his words, and the art itself, do the talking. 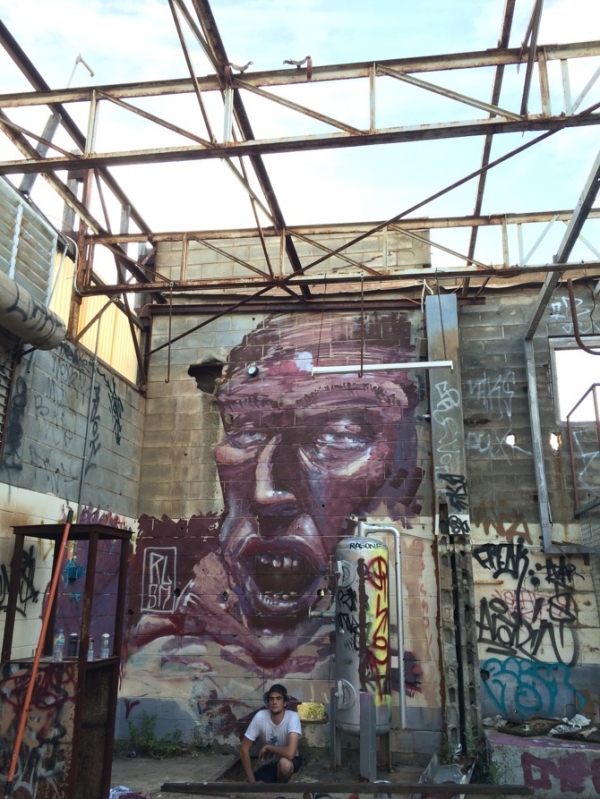 Hey Sam! Firstly, tell us a bit about yourself?

I'm a local Perth creative who has always loved drawing and storytelling. After finishing high school I played in bands and played a lot of music and didn't do too much art. I had this idea that to be able to do art and design you have to be some sort of gifted genius. When I realised that it isn't the case, and that it instead takes hard work and disciplined practice, I took a career in visual arts and design seriously. I used to work under the name RLSM, which I have now abandoned. 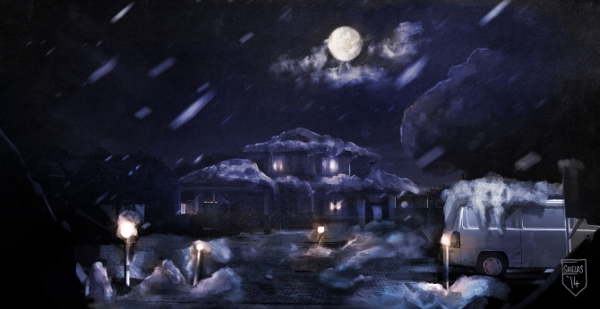 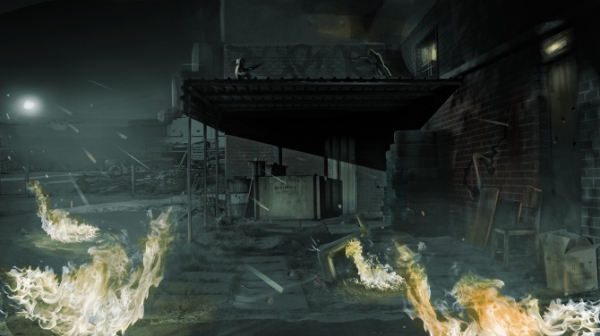 What have you been up to since shedding that name? 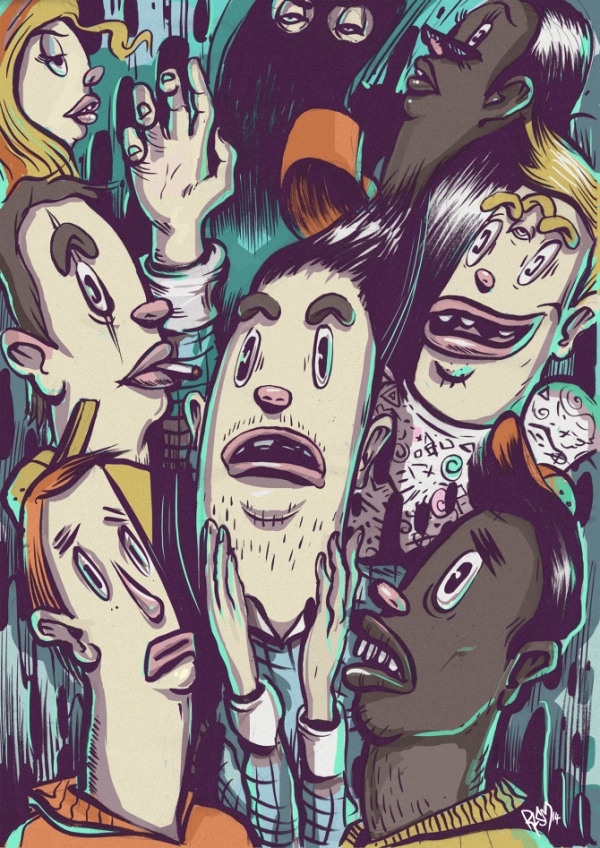 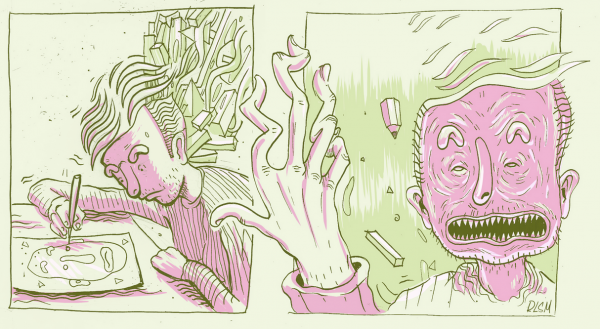 You have a broad background that includes illustration, photography, graphic design and advertising - what first attracted you to a creative career?

I get really interested in different disciplines and I think by trying out a whole bunch of different things, I can work out what type of work I am good at and what I enjoy. 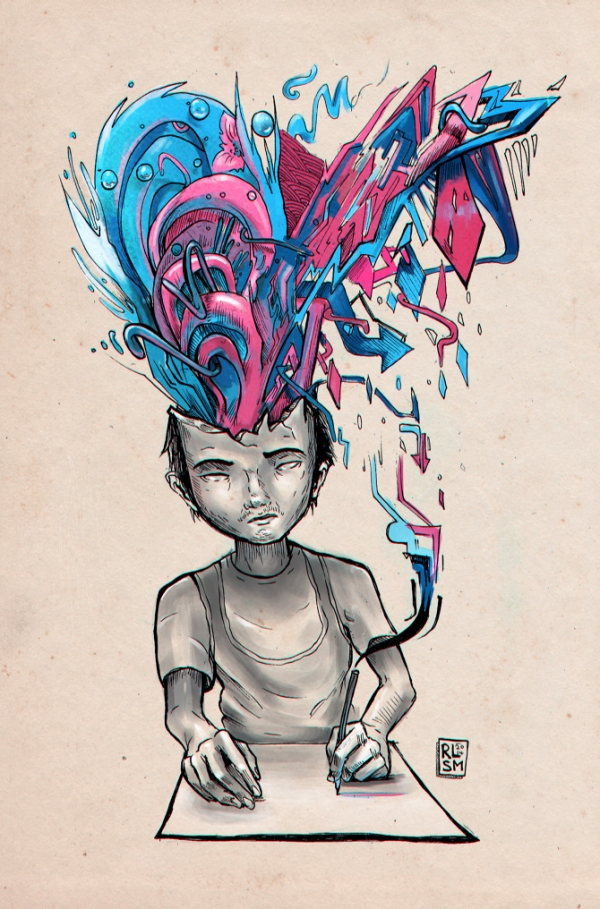 In terms of your illustration and digital art, do you have any particular influences?

I dig the work of so many contemporary illustrators and artists. There are so many things that fly at me from the computer and mobile screen which I am influenced by, but usually I am drawn to quirky, edgy images that have a balance of chaos and control in some form. 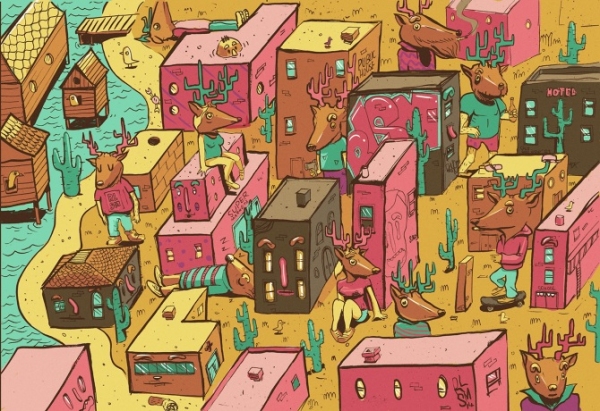 How has your own style developed over time?

Looking back, I have just tried to bite (copy/emulate) stuff that I really like at first, but going through phases. Over time, going through all these phases sorts of ends up becoming a library of approaches to take to different tasks. My style has gone through a roller coaster of being dark and rendered, to more cartoony, to tight, to loose. 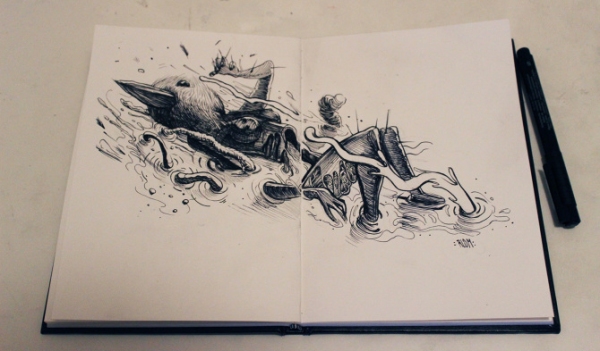 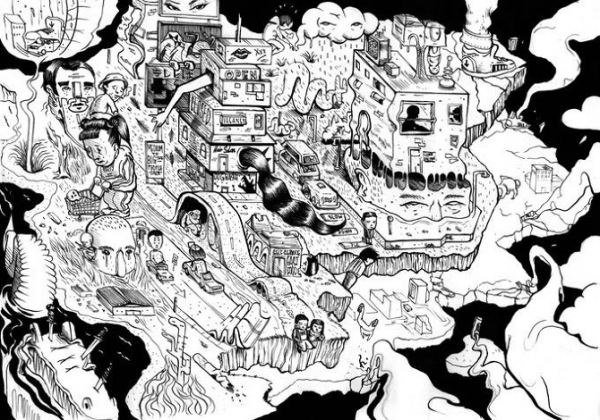 Talk us through your usual process when it comes to illustration?

I usually have an idea or general feeling of what I want to create. I sometimes gather some references for any subjects, but a lot of the time, especially for personal work I improvise. I often just do things like draw random shapes on a page and carve something out of it, like Mr. Squiggle. 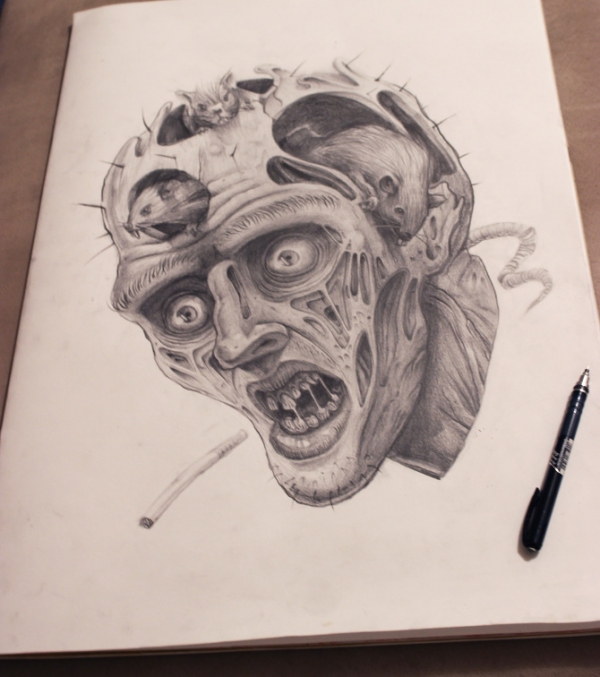 You've been known to participate in live art battles, what's that experience like for you? How does it differ from studio or mural work?

The idea of art battles still seems funny to me, as art is the most ambiguous discipline and to battle seems funny. This is why I approach it as a cool opportunity to work in front of a crowd and try and solve the problem of working fast, improvising and trying new things while under pressure. At first I always felt weird participating in these sort of events because it feels like everyone in the crowd is judging your every move and critically analysing your technique and concept. But after doing a bunch of them I have realised that it isn't the case and to relax and get the piece done. It can be a bit weird painting or drawing with a bunch of people watching and have loud distracting music blaring. But honestly I don't get precious about in just try and make something I find cool at the time.

You've also been involved with the Ten K collective - can you tell us a bit about that?

Ten K is all at once the name, objective and ethos of a strong Perth-based creative collective. It’s been said that it takes ten thousand hours' practice to become a master at any discipline. We're a bunch of like minded people who drive and teach each other when it comes to working, and have fun hanging out when its time to play. Currently the members of the group are Debt, Ferly, Cheeks, Shlives, Sista and myself. 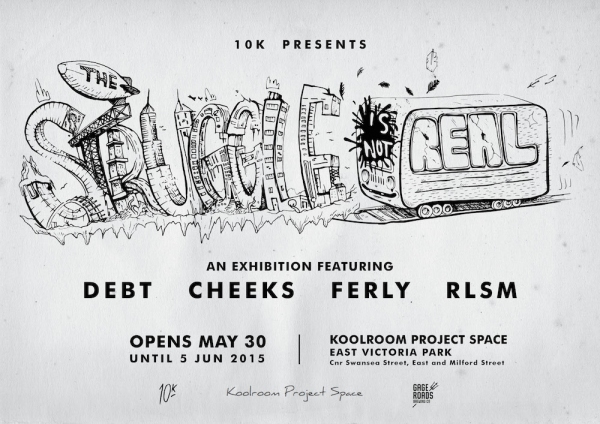 An exhibition by the group earlier this year.

The character in the clip is based on myself. He is chased by an annoying, relentless villain, who represents any nagging burden. The character tries to run from the villain, but it always catches up to him. The character then seeks guidance from a friendly spirit and overcomes his problem.

Did the band have a particular idea in mind or was it mostly up to you?

The overall idea behind the clip was to refer to the lyrics and weave a story throughout a psychedelic adventure. It was mostly left up to me as I created everything and received feedback from the band as I worked through it to create something we were both really happy with.

How did you go about developing the story?

I am actually quite a novice at frame by frame animation, so I basically created a bunch of animated experiments, as I am still learning the ropes, then retrofit a story to accommodate these experiments. There were certain visual sequences that needed to be joined together with sequences, so it was a difficult process but it was rewarding when a section went from being nonsensical, to one that had meaning when it flowed into another section seamlessly.

I'm working on a short film at the moment, which I'm excited about creating and getting done. I'm also going to be spending time creating works for a solo exhibition in January 2016. 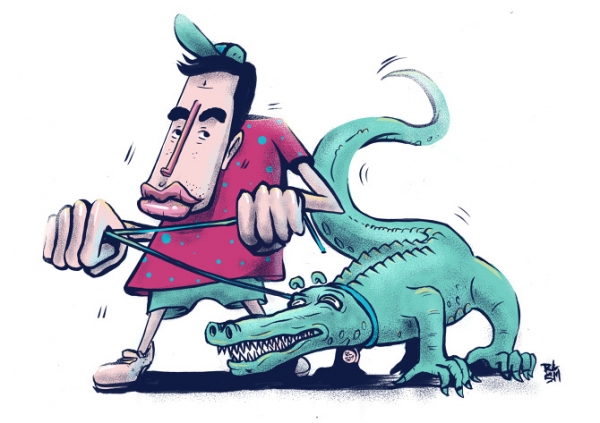 Lastly, where do you hope to be a year from now?

A year from now I will still be here, trying new things, making work and telling stories. 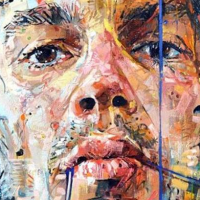 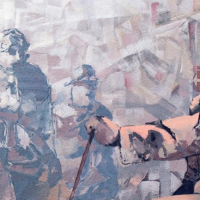 "Universal daywear that's made to last."

Get to know the artist behind our 'New Adventures Of Sable' campaign.

One Sugar To Go