On Friday, 16 young people fell to their deaths when a grate they were standing on collapsed, at a K-Pop Concert in South Korea. Today, the accident has promoted one of the concert organisers, wracked with guilt, to jump off a ten-storey building and commit suicide.

16 people are dead and eight people are dealing with life-threatening injuries after a ventilation grate collapsed underneath an audience at a K-Pop concert in Seongnam, just south of Seoul. K-pop band 4Minute, one of Korea's most beloved and well-known bands, were performing as part of a band showcase when disaster hit.

A video recorded by someone at the concert that was shown on the YTN television network showed the band continuing to dance in front of a crowd that appeared to be unaware of the accident. 4Minute’s record label CUBE Entertainment issued a statement saying: “We can’t express how regretful they are for what happened. The concert was a multi-act concert shared by many artists. During 4Minute's performance, none of the members or staff were aware of the accident and completed their set. It wasn't until they arrived back in Seoul that they heard of the accident.” The girls in the band have cancelled their forthcoming appearances at Seoul Fashion Week out of respect to the victims' families. The concert was held at Pangyo Techno Valley, a multi-purpose complex for tech firms. Around 700 people were said to be in attendance, with the victims reported to have been standing on top of a ventilation grate covering an underground parking lot, to get a better view of the concert. The drop to the carpark below was 20 metres.

The story worsens, as Rolling Stone reports that a concert planner in charge of the event was found dead in an apparent suicide.  A police inspector said that the man, 37, an employee of the Gyeonggi Institute of Science and Technology Promotion, was found dead at around 7 a.m. in Seongnam, having fallen to his death from a 10-storey building after leaving a note that said: I am sorry for the dead victims. Please take good care of my children. The site of his death was not far from where the disaster happened. Korean police have questioned 15 people, including officials of the local Internet news provider which financed and organised the concert, Yonhap News Agency said. “If it turns out that safety regulations were ignored, we would bring criminal charges against them,” a police official was quoted as saying by Yonhap. 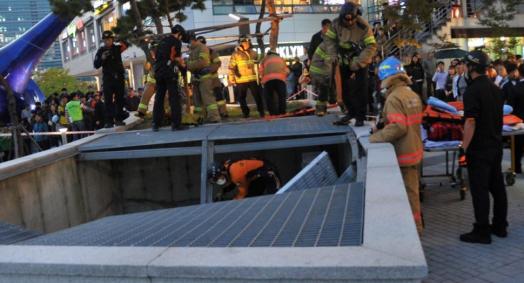 The collapse comes as South Korea is still struggling with the aftermath of a ferry disaster in April that left more than 300 high school students dead or missing. The ferry accident caused a lot of anger as it became clear that the tragedy was almost entirely man-made - the result of an illegal redesign and an inexperienced crew. The accident prompted the government to undertake a nation-wide review of safety standards. The rescue effort was a botched affair too, with two divers dying in the search. The K-Pop tragedy, whilst not on such a huge scale, certainly bears a lot of similarities so far to the ferry disaster, with rumour already abounding that safety regulations at the concert were ignored: witnesses told media there were no security guards or safety fences to prevent spectators overflowing, with dozens of people chanting and dancing on the grating despite warnings by show organisers.

Safety engineering expert Chung Jae-hee told AFP that “Basic safety precautions were all brushed aside…the organisers of the show should have at least set up temporary safety fences or deployed security guards there. These kind of safety hazards are latent in many places all over this country. Over the past decades, economic expansion always took precedence over safety concerns, resulting in the lack of safety consciousness among Koreans."

In June 2012, a massive roof-like structure collapsed onto a temporary stage for a Radiohead concert in Toronto, hours before the band was supposed to go on. Understandably, it takes several days to construct a stage for a huge rock concert, not to mention hundreds of crew members – there’s exact locations to measure, concrete blocks to ballast and build up the raised floor, supports, a roof, and then trained riggers are required to go up scaffolding to suspend lights, visual displays and sound equipment. The structure otherwise ready to go, the technical crew travelling with the band was doing final audio and lighting adjustments in preparation for a sound check, when, in seconds, the white canopy laden with screens and lights tipped forward onto the stage, bringing scaffolding down with it, and the entire staging structure collapsed. Scott Johnson, a 33-year-old drum technician, was killed and three others were injured at the sold-out show, which was subsequently cancelled. An investigation ended in 13 charges against three parties: organisers Live Nation, a staging company and an engineer. 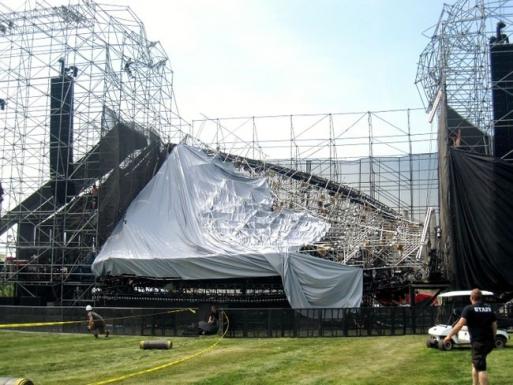 At a 1992 Metallica concert, frontman James Hetfield's proximity to a pyrotechnic flash pot resulted in extensive second-degree burns. In VH1: Behind The Music, Hetfield said “you know, I was doing the guitar part, I don't know where I was supposed to be, then it just went off in front of me... Kirk came over and said ‘are you okay?’ Kirk said James just raised his hand, he was shaking and raised his hand, Kirk said “I could literally see the skin bubbling”. The band cut the performance short, but returned to play a make-up show the following year. 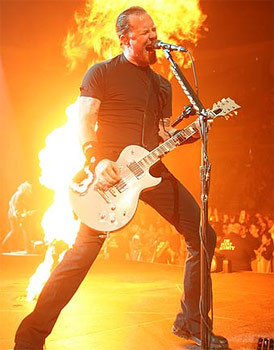 In 2011, while the audience at the Indiana state fair were waiting for a performance from country duo Sugarland, a wind gust from an approaching severe thunderstorm hit the stage’s temporary roof structure, causing it to collapse. The structure landed among a crowd of spectators, killing seven people and injuring 58 others. 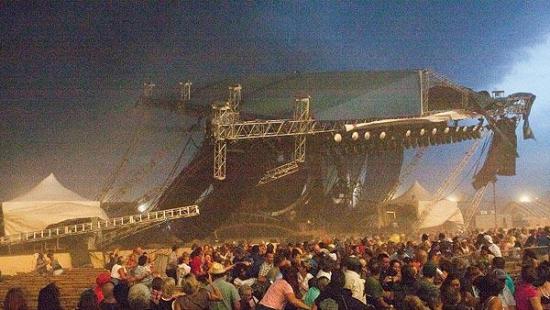 A State Commission was staged, where consultants found that the stage rigging that toppled onto the crowd didn’t meet industry safety standards and that the fair’s emergency plan was inadequate and resulted in confusion about who was in charge. This resulted in the hiring of a new chief operating officer and a new director of safety and security for the fairgrounds, and Mid-America Sound, the company that built the stage rigging, had to pay $50,000 in penalties and create a written Safety Operations Management Plan for all future stage constructions. The dramatic scene was captured on a YouTube video:

In 2000, eight people were crushed to death at Denmark festival Roskilde during a Pearl Jam performance. Roskilde is one of the biggest rock events in Europe, drawing some 100,000 people annually. After daylong rain, the grounds were muddy, and the victims, who were pressed up against barriers in front of the stage, slipped and fell, and were subsequently trampled to death as the crowds behind them surged forward. Witnesses said that the band had repeatedly urged fans to pull back from the stage before the accident occurred.

When a strong storm with heavy winds caused a stage collapse at the 2011 Pukkelpop Festival in Belgium where Lykke Li, the Deftones, Wild Beasts and Odd Future were scheduled to play.  Tents, video screens and stages were thrown to the ground when fallen trees crashed into rigging, prompting the festival’s cancellation. Of the estimated 60,000 people at the Festival that day, over 70 people were injured, with five people killed. This first-person account of one young girl’s traumatic experience at the Pukkelpop Festival is particularly moving:

“I feel stones hitting my body, the wind is so hard that all the stones on this ground are going through the air hitting us… People are screaming, there is so much noise. Outside, inside. Everything is happening at the same time. I don’t know where to look, I don’t know what to do.I’m fucking scared… This is Belgium. This is Pukkelpop. It’s a festival. People can’t be hurt. But it just can’t be that everybody survived this?”

It brings about a realisation that all of the people affected by structural disasters at the above music festivals are just everyday young people like us, in the midst of enjoying a day of dancing to their favourite acts with their friends, when they’re thrust into the most nightmarish of occurrences. 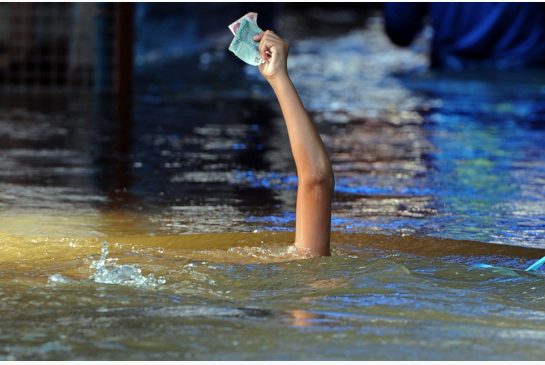 Our thoughts go out to the families and friends of the victims of the Seongnam K-Pop Tragedy. 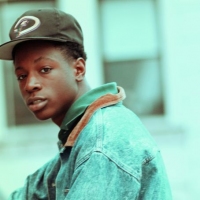 CMJ DreamingActs we’d like to see if we were in New York at the CMJ Music Marathon right now. 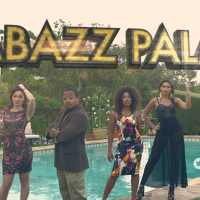