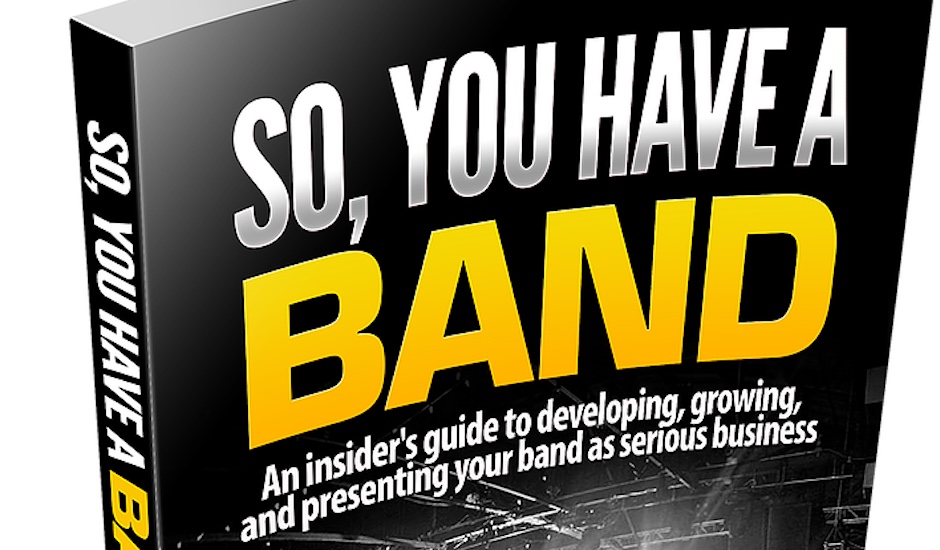 Last month saw the release of a new book by author Tim Wenger called So You Have A Band, propositioned asa kind of Wiki-how for independent musicians. From forming and growing your band, to handle the business side of things and the mental requirements of doing a band properly, Wenger covers it all with personal experience and anecdotes. We hit him to find out a little more about it:

First up can you tell us a little bit about your own history with music and the bands you’ve played in?

Definitely. Thanks for having me! For me, it all started at punk shows as a teenager. I was hooked from the first one I went to. I loved the raw emotion, the vibe of the crowd, and the way I felt so stoked for days afterwards. I saved up my lawn mowing and babysitting cash to buy a Squire Stratocaster guitar for $100 when I was 14 or 15. I started taking lessons in high school, but never actually played in any type of functional band until I moved to Durango, Colorado for college. A couple friends and I started a band, which in 2007 morphed into another band. This band, called Oatie Paste, gave me my first taste of building a working band from the ground up - playing bar-level shows regularly, doing promotions, recording and releasing music, incorporating as a business, and hitting the road.

I managed most of the back-of-house stuff like booking and promoting the shows. I had no idea what I was doing at first. We took any opportunity that came our way. We made plenty of dumb mistakes, from over-booking our home market and wearing out our draw the first couple years, to booking shows on the road in clubs that were a complete waste of time for us (if you’re in a punk band, you’re not doing anyone, including yourself, a favour by playing at a Grateful Dead-themed club or an après-ski happy hour bar).

I finished college with a degree in Communications. In 2010 was able to land a weekly gig writing a music column for an entertainment site. After about a year of that, I landed a job as an editor at a monthly music magazine, which also put me in charge of artist management at its annual festival in Denver. This led to a part-time gig as a talent buyer at a club called Herman’s Hideaway and some stage management/artist relations gigs at other festivals.

How long did it take you to put the book together?

I wrote it in about four months by devoting two mornings per week to putting down 1000 words per session. After that, I hired an editor to do a proofread and copy edit, then my wife (who is also a writer) did another round of editing. I then went through and made a bunch of corrections, and cut down some parts where I rambled too much. Altogether, this took about six weeks. The final step was hiring a formatting person to get the book into the correct specifications for publication thru IngramSpark and Amazon. She got it ready for digital distribution to most every site that sells books, and also handled the formatting for the paperback edition.

I recently had a new website developed for the book, as it has outgrown the page I’d dedicated to it on my personal site.

What gave you the inspiration to write a book to help out the younger bands in the scene?

There are two angles to this. The first one is that while working at the magazine and the club, I saw and interacted with so many young bands that just have no idea what the hell they’re doing. Just like me when I was younger. I want to give them the guide that I wish I’d had when I was 20. To let them know that there’s a lot more going on behind the scenes than what they see their favourite bands doing onstage, and walk them through an outline for the years of hard work it takes to get there. The other angle was out of frustration, to be honest. When you’re on the other side, and are the one receiving bands sloppy emails and phone calls and watching them make one terrible decision after another, it’s hard to keep enjoying the work. Building a band to be a functional and sustainable part of your life is never going to work when the group doesn’t spend any time planning and executing the boring, back-of-house business stuff.

What sort of topics does your book cover?

It’s basically a walk-through of best practices for independent musicians. It starts with developing an inter-band agreement between band members and figuring out who is going to do what. For most young bands, it’s important that everyone in the group has some sort of back-of-house role in addition to their role on the musical side. I talk about some different scenarios as to why and how to make this happen.

Also covered are strategies for booking better shows, pitching media and bloggers on reviewing your album or doing an interview, social media, forming an LLC or S-Corp, and licensing. Then, we talk about booking a DIY tour and how to go about doing it to see the
maximum benefit. Touring is a lot of fun, but it’s pretty much a waste of time if you don’t optimize your marketing efforts.

At the end of the book, I listed some resources for musicians to check out on the internet. 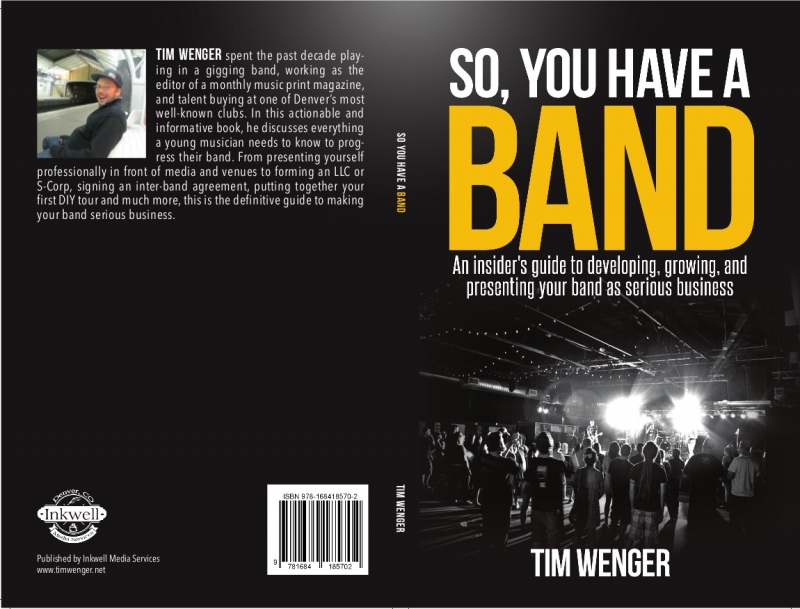 What would you say the biggest mistake is that young bands make?

Figuring out how to make the band work alongside their personal lives and relationships. This is one of the biggest things that musicians struggle with, and probably the main reason most bands don’t last more than a couple years. It’s tough to have such a large time and emotional commitment when there’s so little (if any) money coming in from it. It’s important for musicians to understand that their band is part of their life, but not the whole thing. Prioritize your girlfriend or boyfriend first, or you’re going to lose them. Keep track of your financial situation and career so that you’re not screwing yourself when you take time off to tour.

So many bands, including mine when we were young, become victims of what I call “Chasing The Carrot Syndrome.” There’s this dream of constant touring and making money from music and being able to move away from having a job and all this other stuff. It’s never going to happen for most musicians. These days, even the high-level independent bands that tour multiple times per year still have jobs when they come home.

It’s so important to keep all of the other aspects of your life balanced, and make your band a part of that. Otherwise, you’ll burn out.

Who are some bands that maybe feature in the book, or that are just doing it right as far as you can see?

There are two groups that stand out to me in the Denver scene, and have for years – The Yawpers and The Potato Pirates. What I like about these bands, other than the music itself, is that they’ve been able to incorporate their band into their personal lives in a way that has allowed them to grow consistently over many years without seeing a bunch of turnover. I’m sure both bands would tell you that it’s been tough at times, and that they’ve been through a lot. But from what I can tell, they’ve taken the time to develop long-term plans, and then set out to reach smaller milestones along the way.

They have multiple albums that show growth and experience. They took the time, several years, to cultivate their group in the local scene, as well as doing strategic touring outside of Denver. They’ve hustled pre-sales and brought heads out to their gigs for years, and as a result have shared the stage with some big names in their genres. They turn their headlining gigs into events that generate a buzz around town and draw big crowds. Also, from what I can tell, they’ve taken certain aspects of their presentation and plan and modelled it after what leading bands in their genre have done before them.

What band have you learnt the most from besides your own in relation to living and learning from mistakes you can make in the music business?

The two I listed above along with a couple others that I’ve worked with or known that keep trucking through many years. We all make mistakes. On a higher level, I really like musicians that write music that is representative of where they are in life. As cheesy as it might be, I’d call Tom DeLonge into play here. He got famous writing dick-joke songs with Blink-182 when he was young. Which is appropriate for that age, and when I was 14 I loved that stuff. But his music and outlook on life evolved as he got older. Angels & Airwaves is
representative of this, as are the last three Blink releases that he was a part of – Dogs Eating Dogs, Neighborhoods, and the self-titled album.

He has a family and doesn’t want to tour 200 nights a year singing songs he wrote as a teenager. He wants to progress. I respect him immensely for that. He left the band, and the other guys immediately reverted to writing teenage songs again (see the album California).

When you worked as a talent buyer, what would you look for when booking a band?

The most important factor is getting heads through the door and acting professional with the venue staff. It doesn’t matter how good your band is if no one comes out to watch you or if you’re a conceited asshole. This is business like any other. I’m going to call the pretty-good band that brings 50 people to their show over the great band that brings 10, every single time.

Now the book is out, what’s next?

Marketing, haha. I’m trying to line up speaking gigs, both in-person and through webinars, where I talk to musicians about some of the stuff I discuss in the book. I have a Keynote presentation that I put together that I think is super informative and helpful. I’ve done a few already and have gotten good response.

You can purchase So You Have A Band via Amazon in EBOOK/KINDLE form or PAPERBACK. Head to the Help My Band WEBSITE for more info. 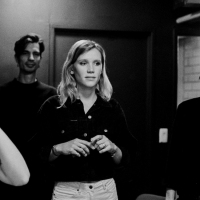 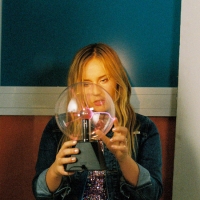