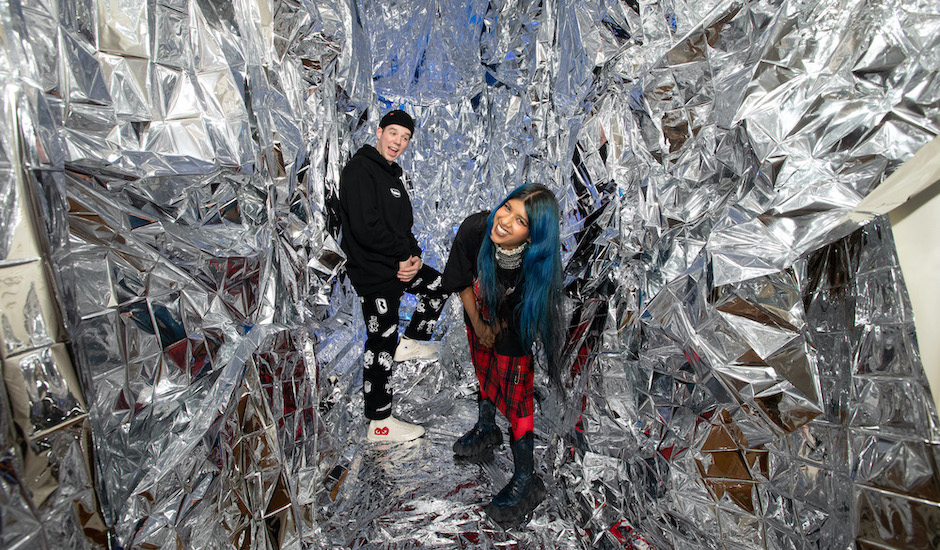 Void Of Vision have kept busy ever since dropping their last record, Hyperdaze, back in 2019. On the live stage, they squeezed in shows where they could before the world shut down, and when that happened, they got to work on Hyperdaze (Redux), a reinventing of the album two years later that sees each of the album's tracks joined by a guest collaborator who takes it to the next level, building off Void Of Vision's strengths while moving things forward into new directions and new avenues with the help of close friends and collaborators.

The full record is out this Friday, March 5th, and the tracklist is stacked. Already, we've seen Thornhill's Jacob Charlton join in on Year Of The Rat - which came with a punch-up of a video clip - while the rest of the album will feature guests including Jamie Hails from Polaris, Ken Koie from Crossfaith, Northlane's Jon Deiley and Ecca Vandal; each brilliant, forward-thinking musicians in their own right, who add glimpses of brilliance to what Void Of Vision mustered up with their album two years back.

"The people I hand picked for each track not only bring their own influence on board, but also build on what was already such an emotionally heavy release," says the band's vocalist Jack Bergin on the record. "It’s fully shaken the album up and spat it out somehow even more powerful than the original. We are super proud that we could create such a bold and collaborative project and still have it translate as we originally intended it to."

The Ecca Vandal-assisted Decay reimagining is another getting the single treatment, arriving early this week ahead of the album's release on Friday. It comes with a video featuring The AV Club, placing Ecca Vandal in the spotlight in a way that it genuinely feels like her presence on the song is felt, in contrast to many modern-day remixes - especially in the pop and hip-hop worlds - where guest artists emerge for a short ten seconds before disappearing again; Ecca Vandal instead leaving a lasting imprint on both the song and its video.

"We have all been familiar with the name Ecca Vandal for quite a while now, it wasn’t until our run together on Good Things Festival ‘18 that we REALLY pricked up our ears though," says Jack on the collab. "Unfortunately we clashed sets each day except for the last, so when I got to run over and catch those last few songs it was everything I hoped for and more, ever since then she’s been a playlist regular. We were so stoked that she was down to collaborate and work in her own style so effortlessly. Ecca has such a powerful presence and now it’s been stamped on a little piece of VOV history."

Today, we're welcoming a behind-the-scenes glimpse at the song's video clip, with Jack giving us an inside look into the creation of the song, its video, and everything else going on in their world at the moment. You can pre-order the full Redux record here, take a dive into the video below, and underneath that, catch up on the photos and words compiled by Jack that gives you a bit of a teasing inside look.

Behind the scenes of Decay's video clip, with Void Of Vision's Jack Bergin: 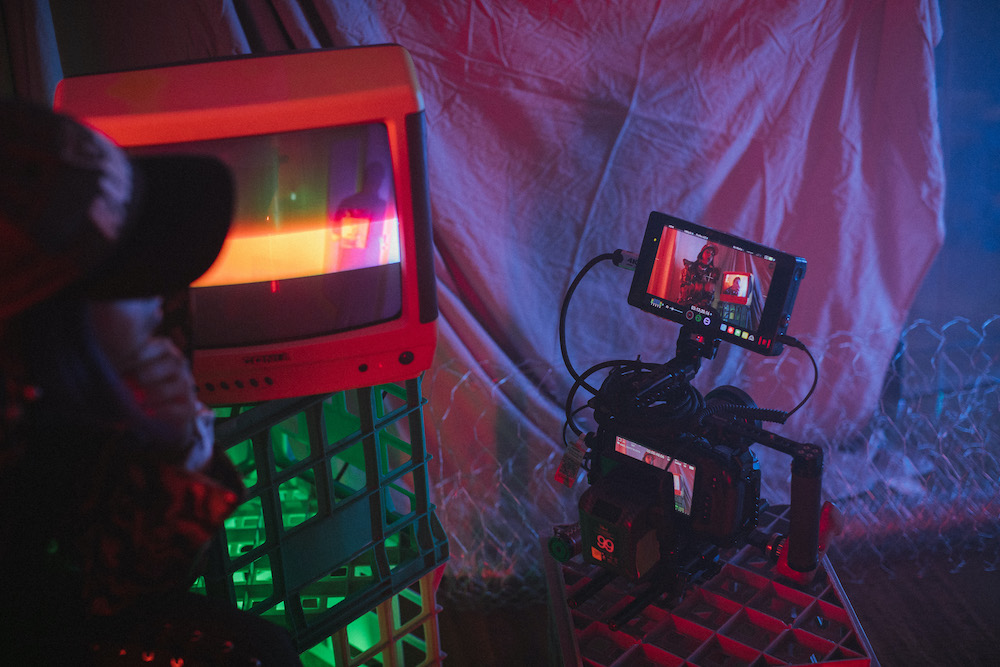 From the get-go we had this TV shot in our head where we were either going to have the original Decay video playing back, or something a bit more experimental. We ended up playing with our new little monitor we picked up off Facebook marketplace and figured out we could loop live video onto it from the camera. So we set everything up in a second room and simultaneously filmed Ecca and I’s TV shots at the same time, looping my head onto the screen next to her. 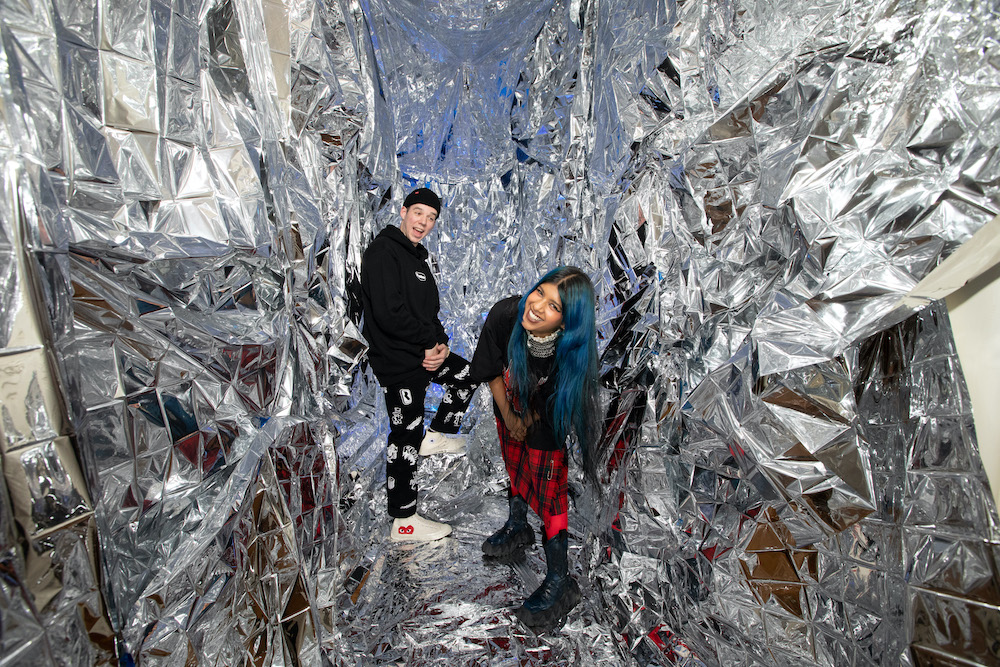 I had the whole hallway idea in my mind for SO long and after buying 150 metres of aluminium foil to have it not shine and lay out how we wanted it, I almost gave up on it. That was until Cian (Marangos, director) linked me to 80 emergency blankets with express shipping on Amazon, alas the dream was kept alive and came out as one of the most eye-catching Void Of Vision MV sets we’ve worked with to date. 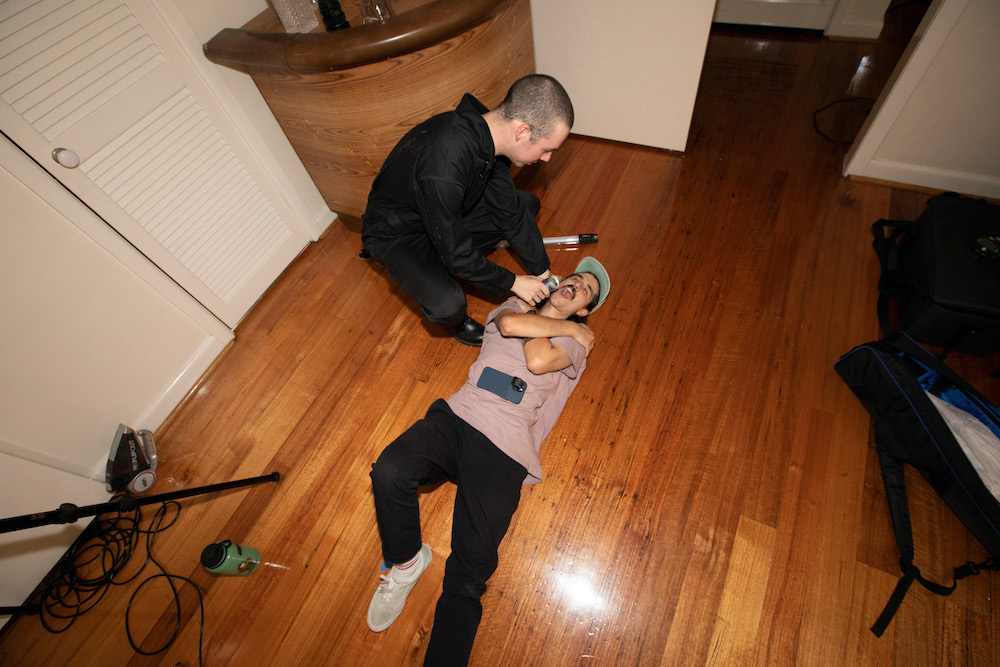 As we wrapped up the shoot, all my housemates conveniently arrived home from work to what basically was a fun house. Being a Friday night, we all cracked open some celebratory drinks and enjoyed the stress-free pack down with crew. Pictured is myself feeding Cian his hard earned treat. 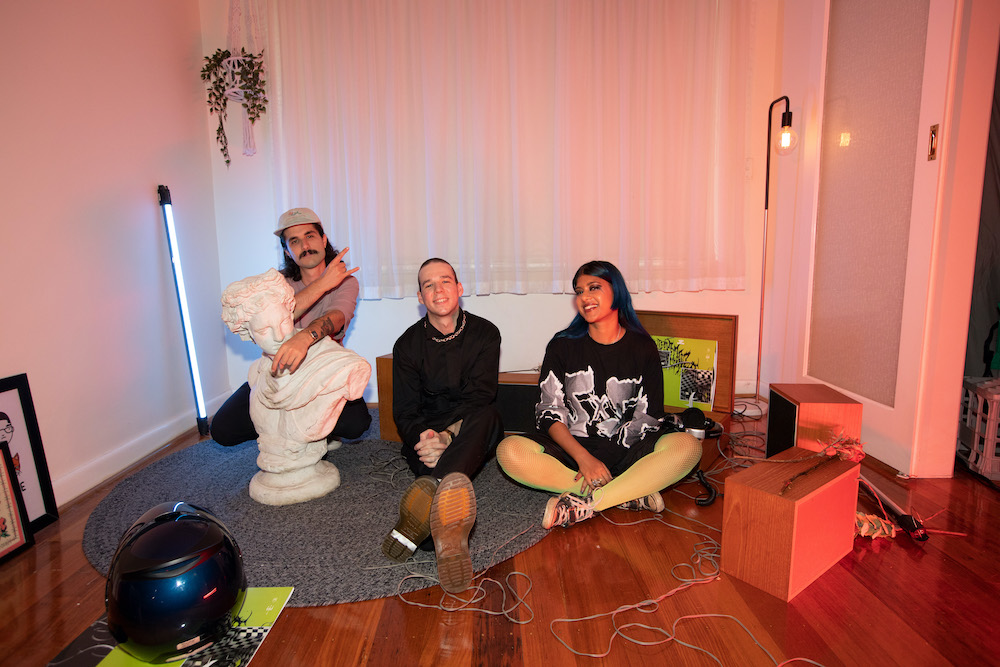 This crew is up there with the coolest creative teams I’ve had the pleasure of working with. Very proud we were able to work together on this video so well to create such a sick final product. 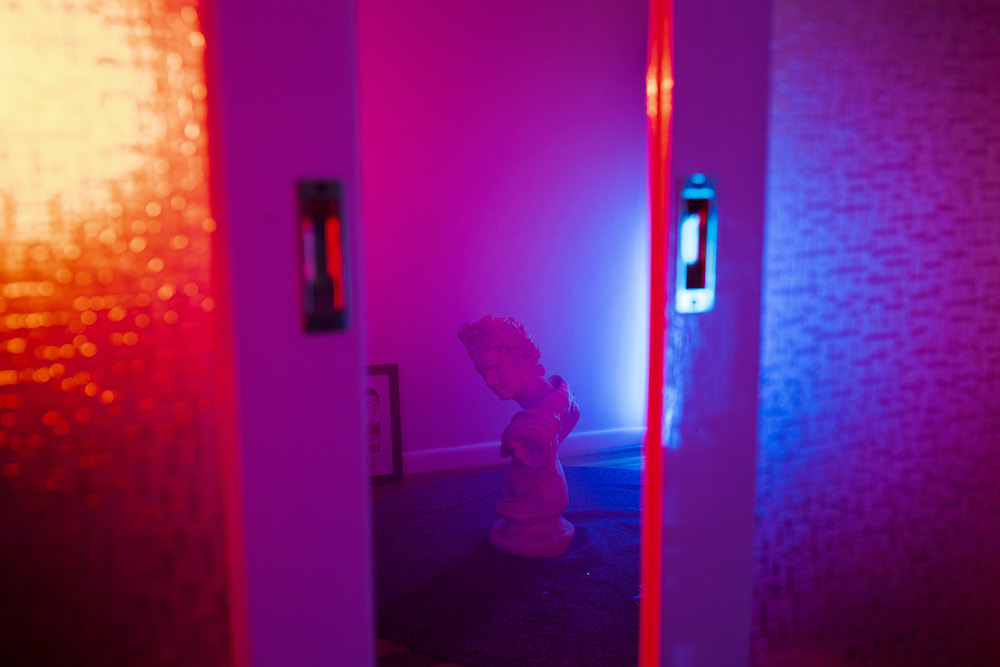 One of the initial ideas of this video stemmed from myself & Cian visiting an antique store where we ran into this sculpture. I walked past on the day and within a week I was back there to pick up the head plus more props for the video. It sounds super impressive but a lot of the items I picked up never even made it onto any of the sets and now my house is full of even more useless shit. 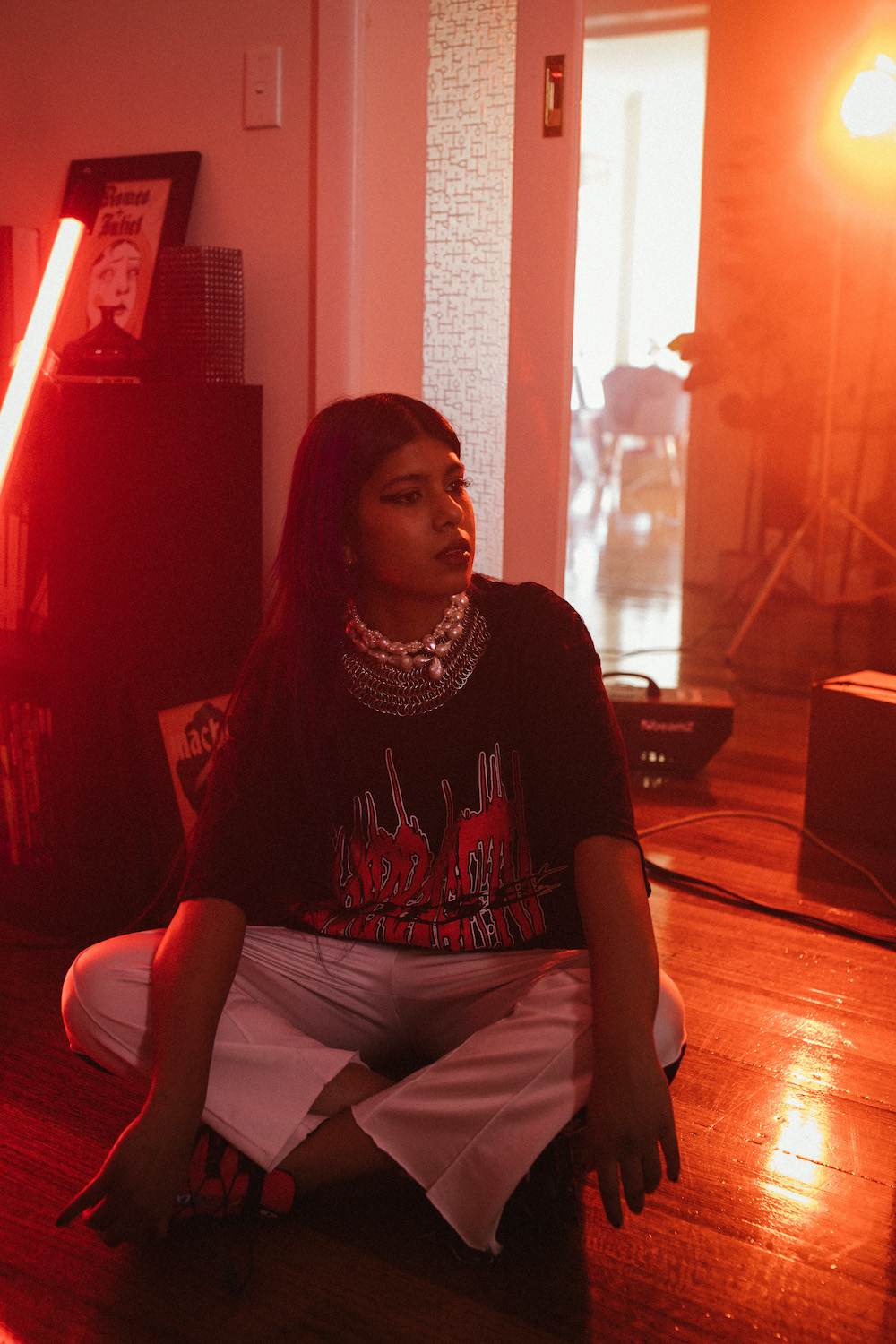 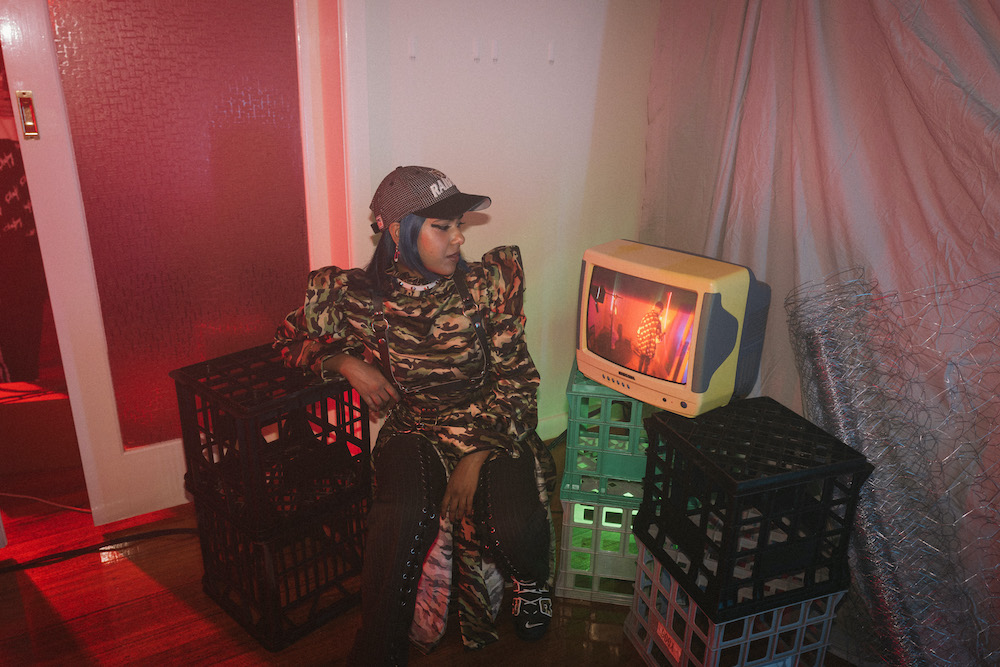 As cool as our livestream TV shot was, there was a slight lag from my footage on the TV to Ecca’s shots. This definitely made for a tricky edit for Cian but he’s that bloody good at what he does that you never would’ve been able to tell if I hadn’t said anything. 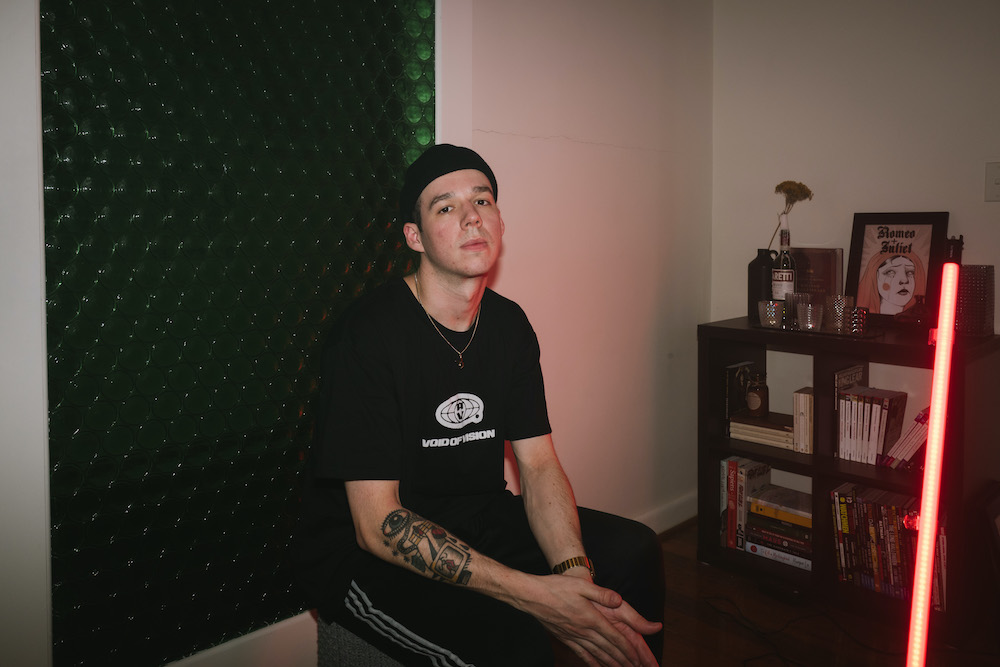 We were lucky enough to have the entirety of this video shot from inside my own house. No curfew, no restrictions, no rules. To tackle ambitious set ideas from the comfort of your own home makes the entire process a hell of a lot less stressful. Definitely not the first time we’ve done this for a video and it definitely won’t be the last. 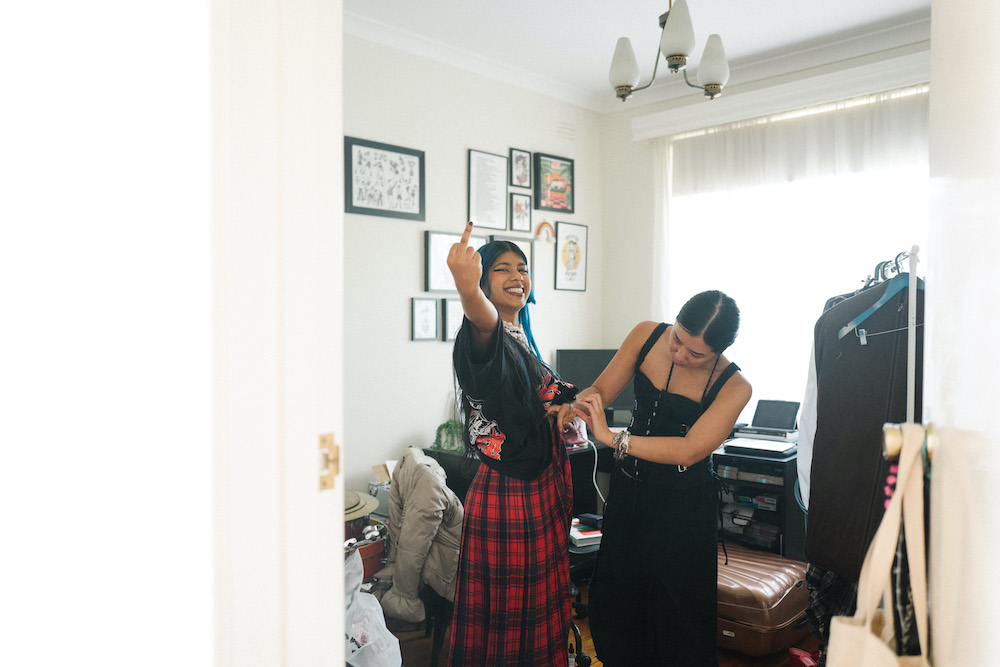 This was the first Void Of Vision video we had a stylist on board for and it was such a treat. Ecca hit the set each changeover looking a million bucks and the outfits were just so insanely cool. 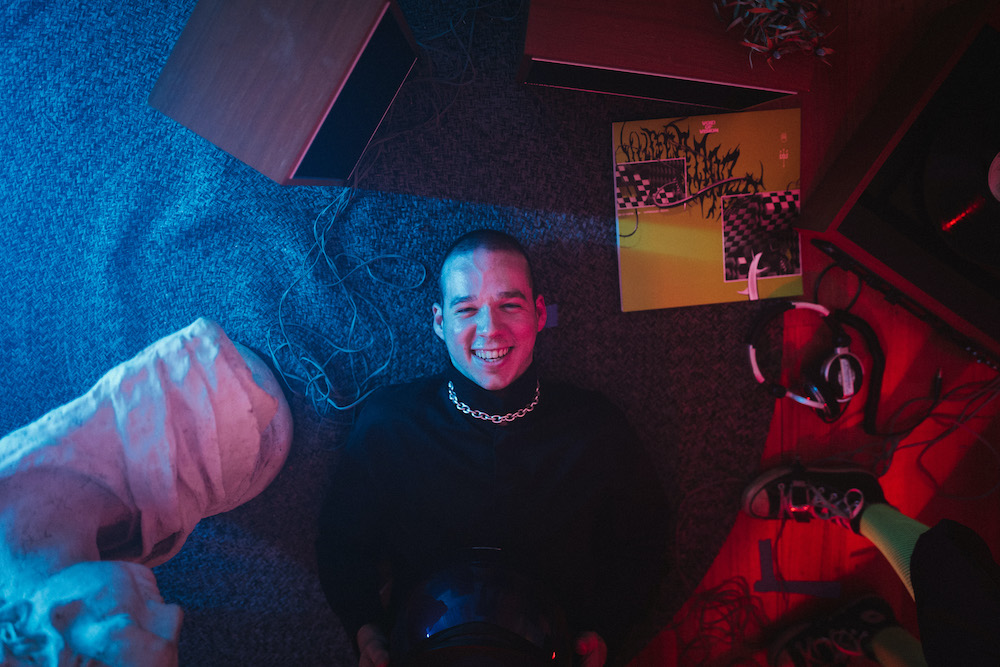 There wasn’t much to dampen spirits on the day, for such an easy flowing shoot it was easy to just sit back and smile while everything progressed beautifully. It’s honestly such a good feeling to be able to soak in the experience and just realise you’re there doing what you love. 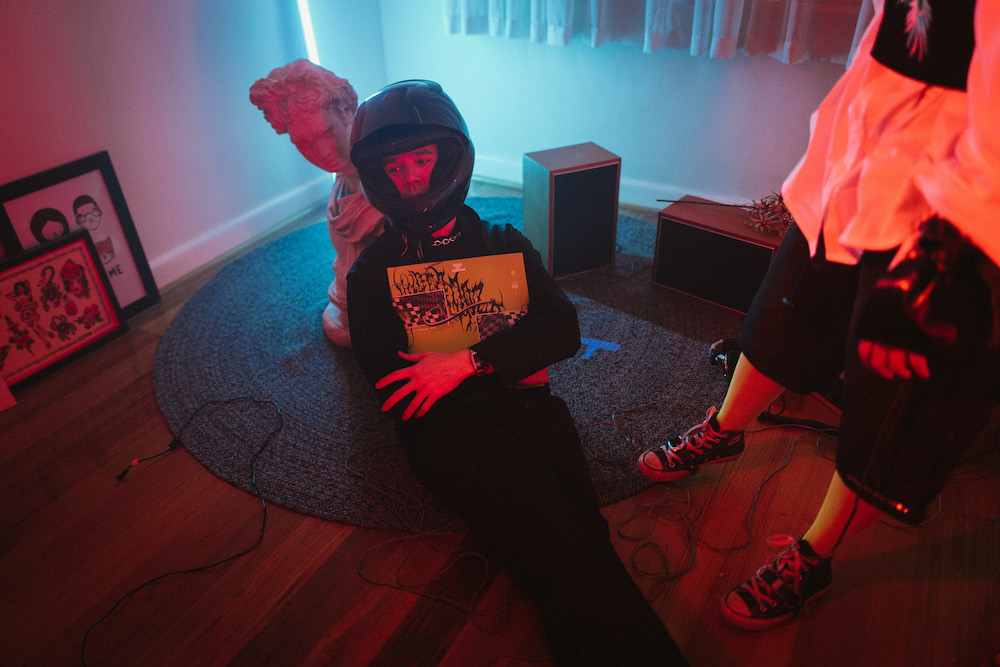 We had this vinyl whipped up last minute by our label (thank you so, so much Kate at UNFD) and thrown into an Uber connect to my house the morning of the shoot. It was great including this very fun little Easter Egg that will soon be revealed. 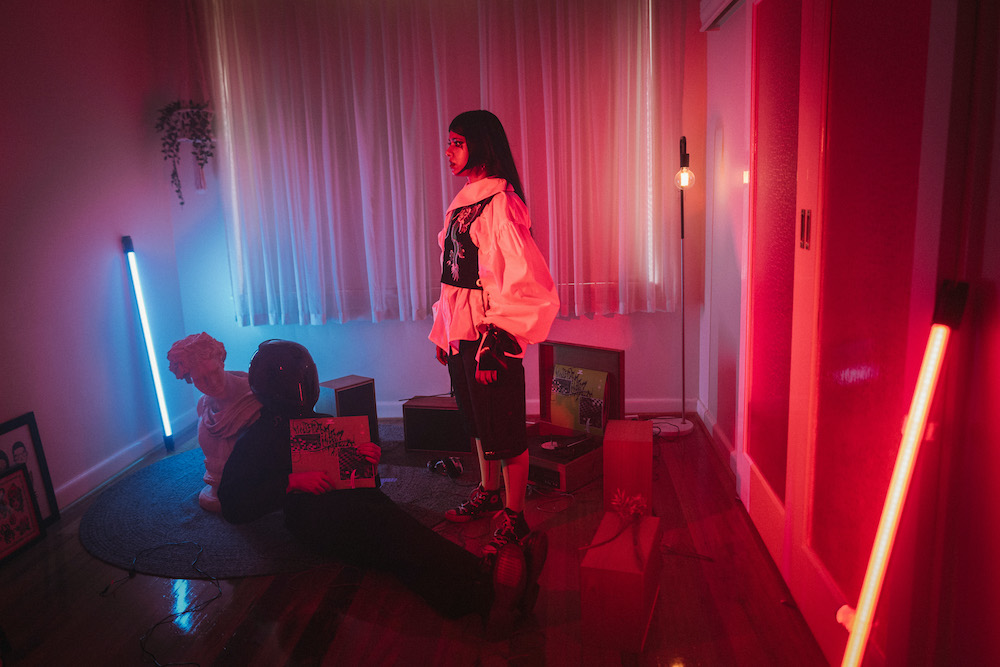 The top down camera was so high up to my roof that you can’t even see it in these regular BTS shots. I’m so sorry for Ecca's neck for having to constantly look up there for entire shots at a time while I just relaxed on the floor with a helmet on. The helmet did smell awful though if that balances things out. 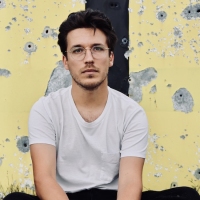 Premiere: Welcome A Twenty-Two Letter Phrase, and his debut single The Little ThingsThe project is a new solo venture for esteemed guitarist Angus Frederick Gardiner, known for his work with Papa vs. Pretty, Montaigne, Jarryd James, E^ST and more. 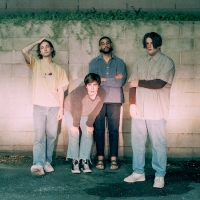