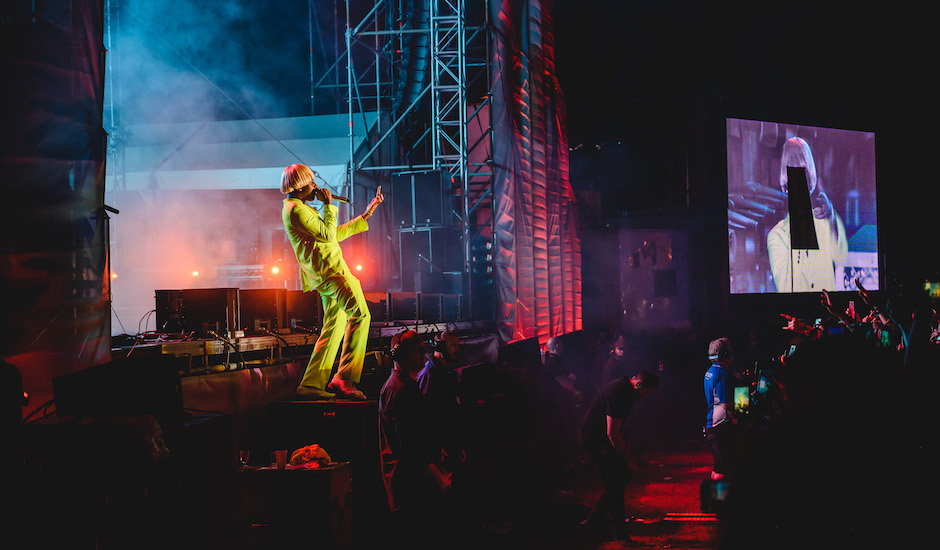 Header image and all in-article images by Liam Fawell.

Perth’s live music culture is tough. We’ve been partly blamed for the deaths of Big Day Out and Soundwave – lacking ticket sales on the west coast apparently enough to help put the events within two years of another – and tours regularly skip over Perth; a three-date run of Sydney, Brisbane and Melbourne the perfect balance between good sales and cheap flights. On the other hand, however, there are pockets of events on the outer fringes of mainstream commercialism that seem to always dominate, often centring themselves on the heavier side of electronica: dubstep, drum’n’bass, trap and the list goes on.

Origin Fields – f.k.a. Origin NYE – is one that started by centralising itself on this rising trend of quick-paced, hard-hitting dance music, often uniting artists from the underground of dance music with, in their later years, rappers that bring the world’s swelling hip-hop dominance to areas that without the festival, would often go without.

Last year, however, things changed greatly, and despite the initial blowback from the festival “abandoning their roots” (they weren’t, only diversifying their lineup with the extra space that comes with expanding to two days), it was a move for the better – something we began to see flourish in its most clear form in 2019. While their 2018 lineup dived a little too far into the indie-adjacent world – The Kooks and Tash Sultana are a far cry from Cardi B and Pendulum, who also played – their 2019/2020 lineup felt like the festival finding their feet post-lineup experimentation; RÜFÜS DU SOL, their day two headliner, far more well-suited to a festival of this background.

Here are all the things we took away from this year’s festival, which not only ended the decade just gone, but started a new one too:

After their 2018 lineup brought confusion and conflict, Origin Fields seemingly figured out the perfect balance in 2019/2020:

Last year’s Origin Fields announcement – topped by Pendulum, Cardi B and Migos, before the latter of which cancelled their appearance – was notorious. Being their first year to incorporate a more alt-pop-aligned slithering to the lineup through acts like The Kooks, the festival’s lineup was welcomed with comments of triple j’s dominance; the radio platform’s inclusion into the festival as a media sponsor somehow detrimental to the lineup’s final form (if you ask the drum’n’bass bros, that is). This disjointedness was something reflected on the day too; The Kooks into Cardi B and M.I.A. into Pendulum examples of how the confusing lineup would often see whole audiences change over for sets on the same stage.

This year, Origin Fields seemingly nailed the contrast perfectly. On the mainstage, Skepta and Tyler, The Creator felt hand-in-hand with the stage’s closer RL Grime, in the fact that they’re often artists who appear in the long-time electronic favourite’s stage show. On the Vacation Stage – a place that sat somewhere in between the main stage’s big drawcards and the Paradise Stage’s experimentalism – Lastlings and TOKiMONSTA were a perfect fit amongst the electronic chaos of Golden Features later on. Even on the second day, where the festival branches more into the ‘relaxed’ sphere, artist transitions felt matched: Mallrat into The Veronicas; Cub Sport into RÜFÜS DU SOL; Shockone’s live debut into What So Not; Motez and Jordan Brando on the heavier stage. 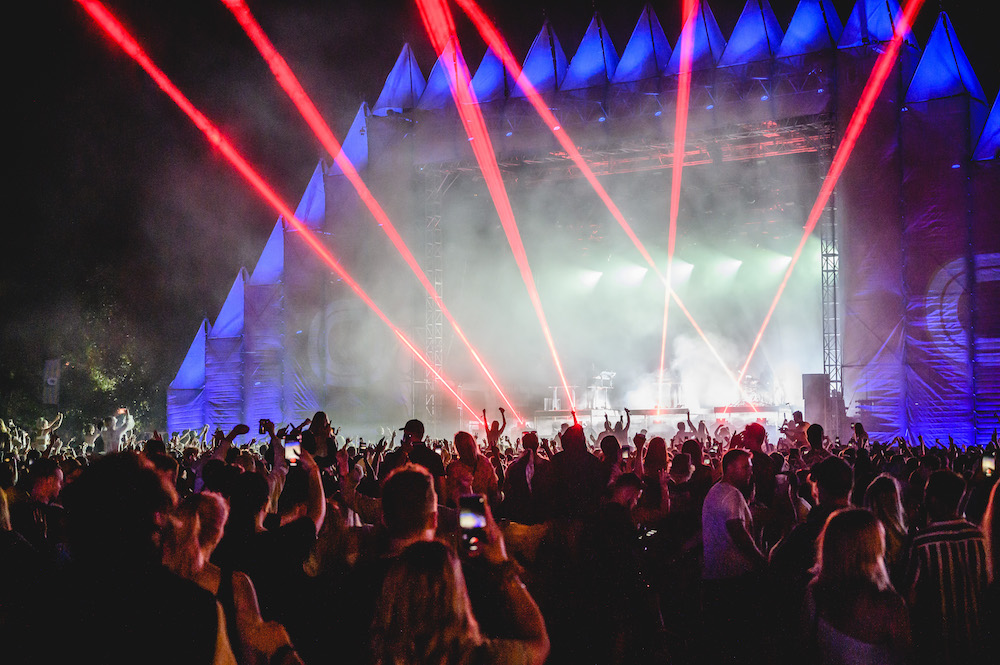 One of the big takeaways from last year’s Origin Fields was how hip-hop and R&B seemingly dominated the day despite only being a small portion of the lineup; the energy and charisma of acts like M.I.A. and Cardi B incomparable. This year, hip-hop was still a big force – something we’ll talk about shortly – but it was hard not to feel Australia’s impact at this year’s Origin Fields, even if the festival is a go-to haven for those wishing to see international artists afar from the Australian live music world.

On the first day, Australia’s presence was reduced to just a smattering of local artists opening stages and Golden Features latter on: hip-hop was the driving force of day one, felt through Tyler, Skepta, Gunna, Ella Mai, YBN Cordae and so on. On the second day, however, even the highlights of the international world – Lion Babe particularly – felt incomparable to the dominance of Australian music. The Veronicas’ unexpected appearance was a runaway favourite and one for the ages – something we’ll talk about a little more in a moment – while Mallrat, Cub Sport and RÜFÜS DU SOL – all familiar faces amongst the Australian festival world that would’ve felt out-of-place at the festival just a matter of years ago – shined brightly. 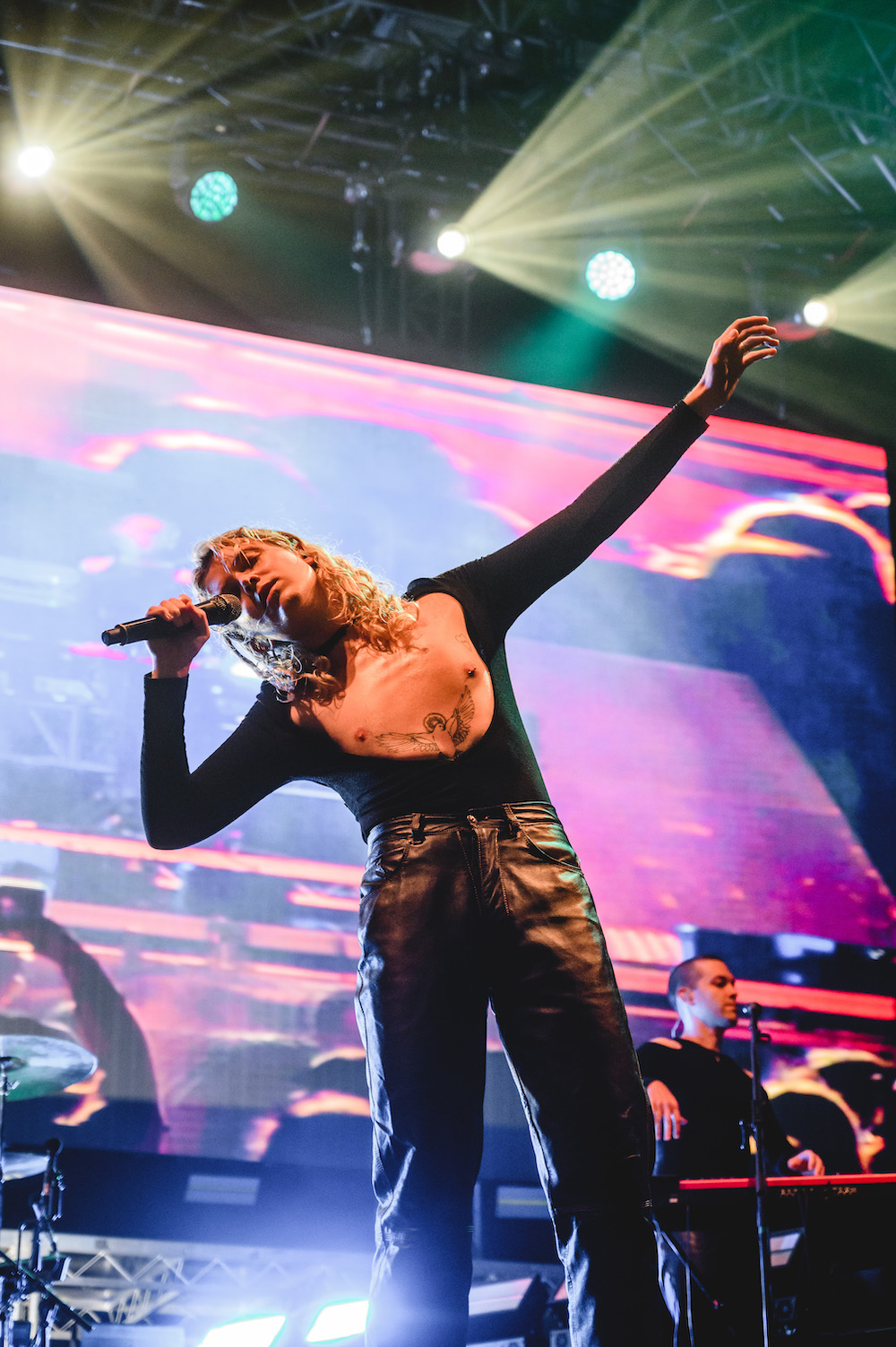 Tyler, The Creator’s live show was divisive – but one you should’ve seen coming:

The crowd for Tyler, The Creator – fittingly huge, considering it’s his first Australian tour in years, and one that not many people saw coming considering is well-known ban – had to be one of the festival’s most opinionated. The set started with a run from his latest record IGOR – its opening theme, I THINK, NEW MAGIC WAND, PUPPET, EARFQUAKE - with Tyler front-and-centre; backed only by a grand piano he’d latter riff on before the latter single’s shattering choruses. Later, he threw it back to old highlights – favourites from Flower Boy (Mr. Lonely, Who Dat Boy, See You Again), Yonkers, Tamale, IFHY – but was it enough?

According to the crowd, it depends who you ask. Some thought Tyler’s reckoning was lacklustre; the emphasis on IGOR’s piano-riffing gentleness unexpected from someone who was once a go-to amongst the heavier world of rap music. However, in our eyes anyway, it was all class. Donned in his signature bold-yellow suit and fringe-y wig, it was a dizzying display at Tyler’s growth as a musician and person in the public limelight, with his radical transformation from hip-hop’s ‘bad man’ to someone exploring the intensity of emotional R&B and hip-hop with a somewhat grace – something he’s been navigating in the past two albums – on full display.

Sure, there were no nods to Odd Future or his many collaborations and guest features – a frustration voiced by those unhappy with the rap titan’s set – but this also wasn’t a set to highlight Odd Future; it was instead, one that aimed to prove Tyler, The Creator is one of hip-hop’s best, and a constantly changing force who, no matter what he does, will constantly surprise you. He was successful in doing that. 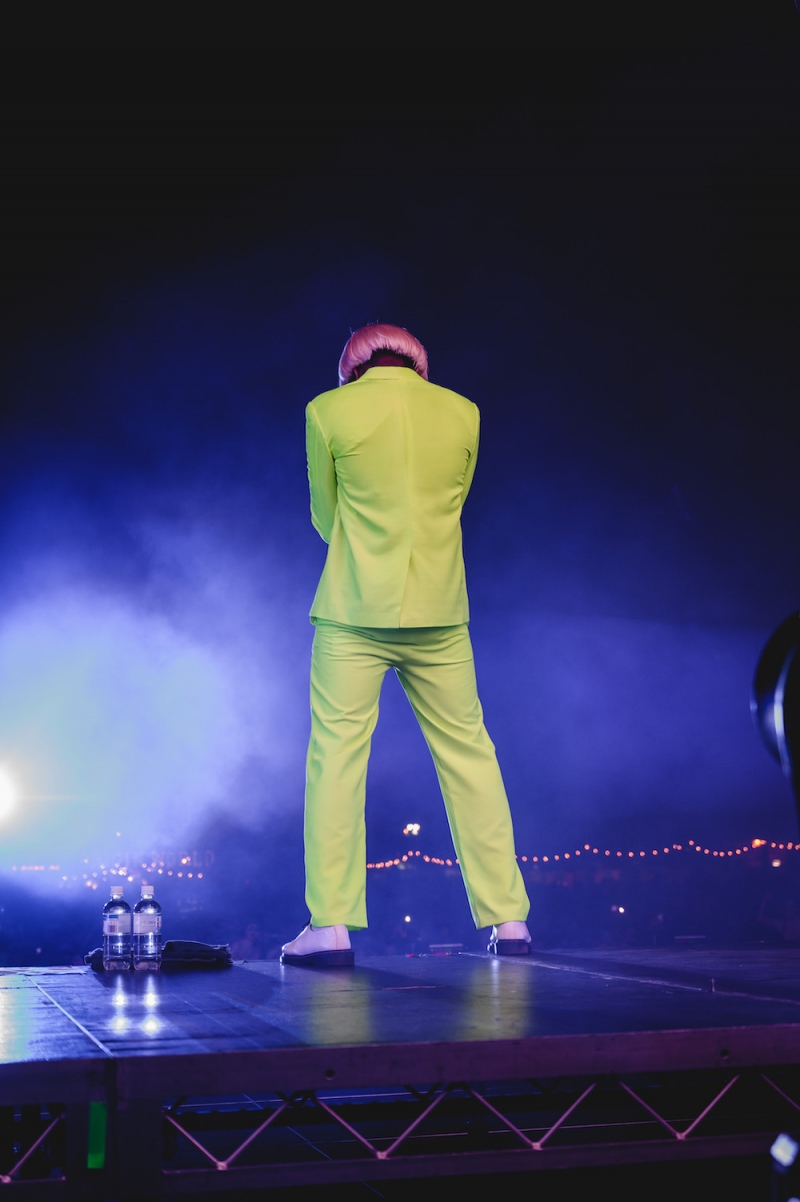 The Veronicas’ comeback is a story of music memes done right:

Over the last two years, flashes of virality have had more of an effect on Australian festivals than ever before. Falls Festival have tapped into it in the past – Daryl Braithwaite, Toto and John Farnham have all played at the festival in the past three years, after their respective greatest hits went somewhat viral in the year beforehand – but this year, it was all about The Veronicas. It began this time last year (when the duo joined Mallrat on stage at Sydney’s Field Day for a rendition of Untouched), and it hasn’t slowed down since; the eclectic duo bouncing back this year with a new single (and a whole album on the way), a new TV show, and sets at Good Things – where they infamously hosted a viral wall of death.

However, unlike the other viral flashes of meme music mentioned, The Veronicas’ comeback feels incredibly genuine – and actually a good thing. While a festival-goer’s dad is probably more nostalgic for Braithwaite and Farnham than the attendee themselves, The Veronicas’ rise perfectly lies within the early-mid 20s age bracket and their youth – they grew up with Untouched, Take Me On The Floor and 4ever. As a result – and as expected – The Veronicas’ presence at the festival was huge. It was among the festival’s largest and liveliest crowds, and despite only having a thirty-minute set-time, the sisters brought everything: nods to their complicated relationship with QANTAS (“My new year resolution is to not be kicked off any aeroplanes this year”), their hand-led choreography, and the energy of Untouched which, all this time later, still goes the fuck off (“Please stand for the national anthem,” they yelled before beginning the song).

It’s also worth mentioning how with The Veronicas’ set at Origin Fields, the festival ticked boxes in fields they’ve come under fire for in the year’s past: female representation, Australian representation and queer representation. Let’s just book The Veronicas for festivals whenever we can, please? 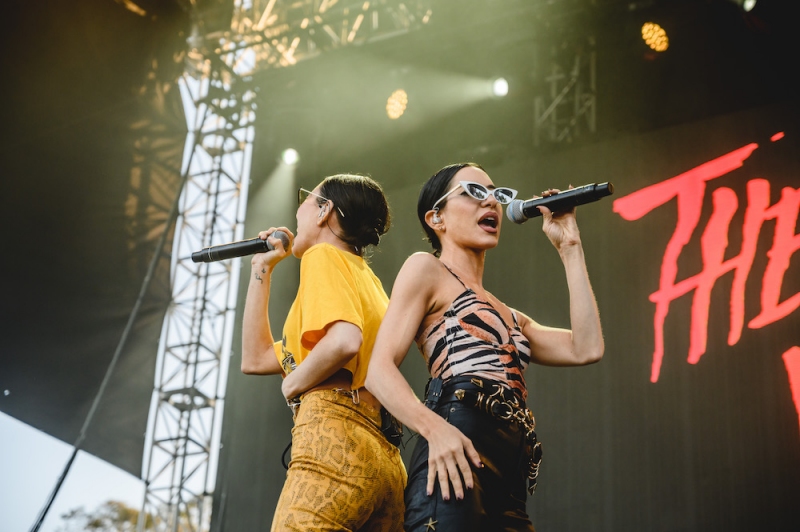 Dance music will never die, but hip-hop is definitely taking over:

As mentioned earlier, last year’s big takeaway with Origin Fields was the dominance of hip-hop, with acts including Cardi B, Sampa The Great and M.I.A. stealing the show amongst the plethora of dance and indie acts which gave the lineup its bulk. This year, dance music still has a massive place at Origin – its roots in drum’n’bass and dubstep makes it world-renowned, and it’ll be a shame to see that disappear – but it felt more contested by hip-hop R&B than ever before, especially on the day that welcomed Tyler, The Creator’s long-overdue return.

Although topped by RL Grime, the far-extending Sunset Stage crowd felt a little more populous in the rap sets the preluded the trap king’s return, with Tyler, Skepta, Gunna, Ella Mai, YBN Cordae, Shoreline Mafia and Rich Valentine – even YNGRACH, too – all showcasing hip-hop’s incomparable popularity rise in the past year, as well as a rise in show-stopping talent that see their live shows amongst world-bests. Even many of the electronic billings felt rap-influenced: TOKiMONSTA’s work with Anderson .Paak ringed out through the tent, while Snakehips, UZ, What So Not and Jauz all take from hip-hop and rap collaborators in work. On the notably Australian second day, hip-hop’s dominance was much more subtle, but it’s easy to see that Lion Babe will be a future force in funk-built R&B.

It’s worth mentioning, however, that dance music has a chance at fighting back. At one stage, Origin Fields’ exploration of dance music didn’t extend far past the roots from which the festival was born, but this year, you had suggests that the festival was continuing to branch out, and a big winner of this is techno. This year, techno and house music’s increasing presence in the commercial dance world felt more represented than ever, with Golden Features, Chris Lake, Jordan Brando, Lastlings, Motez, Willaris. K and others moving into centre spotlight as Origin Fields showcase the brilliance both overseas and locally-grown. Hopefully, it’s something they showcase in further years, too. 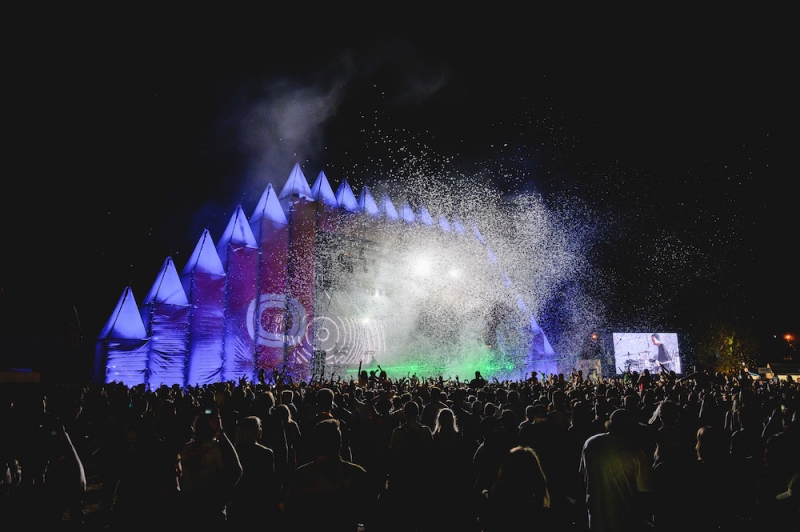 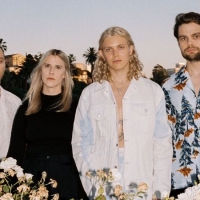 This Week's Must-Listen Singles: Cub Sport, Nina Las Vegas, Baauer + moreAll that, plus new work from GRAACE and the return of Ladyhawke. 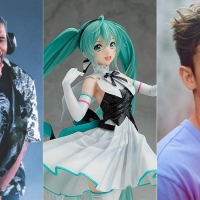 What Coachella's 2020 lineup means for everyone too poor to goFrom new album releases to big-name returns, Coachella's lineup has a lot of wins even for people without thousands in savings.
Light & Easy