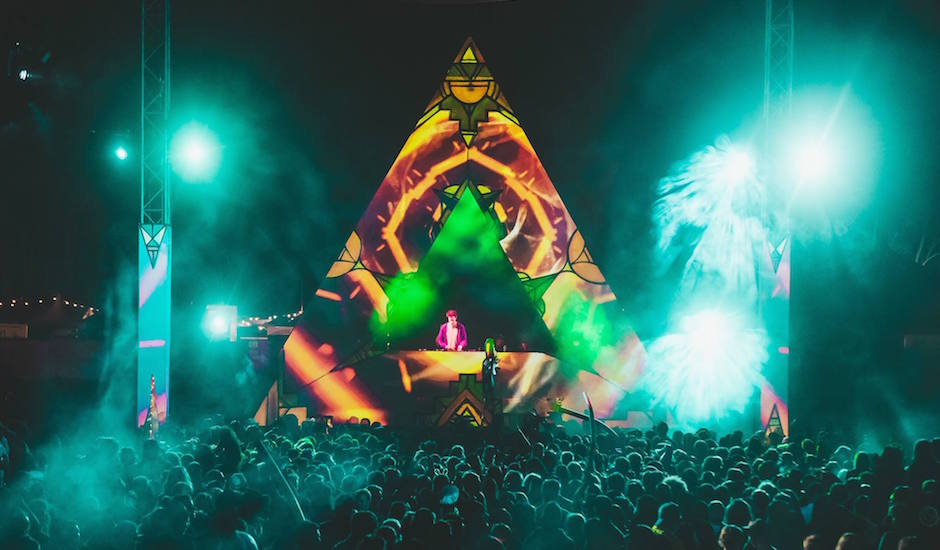 Header image and all others by Cai Griffin taken from the Lost Paradise Facebook Page.

Lost Paradise happened over the New Year's period just gone, and while it might not be on a known scale at the level of your Falls and Beyond The Valleys, it's very quickly gaining a reputation as a must-do on the NSW festival calendar. And there's no further testament to that then not one, but three of the Pilerats team not only buying tickets themselves to attend, but all loved the damn thing so much they collaborated on the review below:

Situated in Glenworth Valley, Lost Paradise was a measly hour drive from Sydney till you arrived in a lush valley. With a river to swim in, security guards who were more likely to say hi than search you, an ingenious cashless system on your festival wristband and the top shelf line-up, expectations were set high. The phrase 'lost in paradise' was quickly thrown around and became a cliché. But there’s a reason phrases become clichés, they’re true. 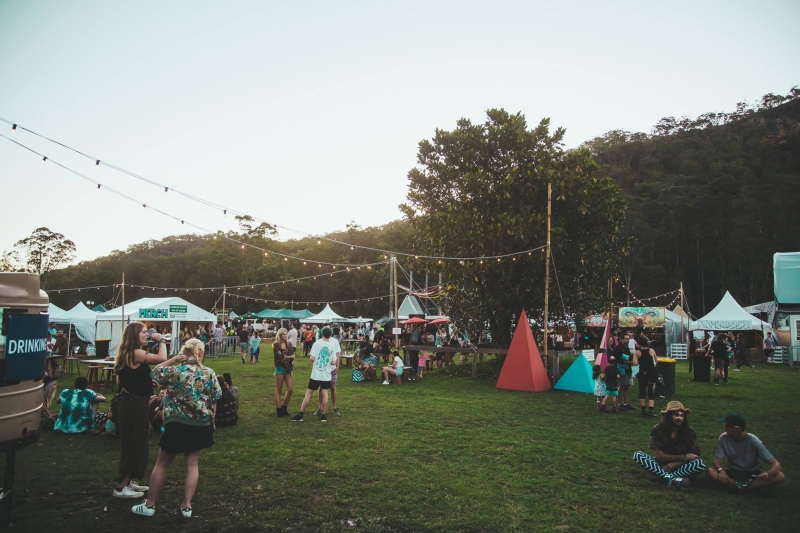 Opening the band stage, Arcadia, were psych-rock outfits Ocean Alley and Bootleg Rascal, and both kicked things off in fairly similar style, with the fresher of the two, Ocean Alley, taking line honours. On paper Sampa The Great was an oddity, one of two hip hop acts in an otherwise electronic and rock dominated line-up. On stage Sampa The Great push that aside as she blasted through tracks like F E M A L E off The Great Mixtape for a hype-backing-up set. The stand-out act was City Calm Down with their idiosyncratic frontman Jack Bourke, with a mixture of Liam Gallagher’s mannerisms with the way he held one arm behind his back while performing alongside his own bottled energy. For the most of the set he didn’t so much as dance but twitched from one position to another as if he was struggling to hold in something. It was an intoxicating performance by City Calm Down and signalled their potential to only grow in size in 2016. 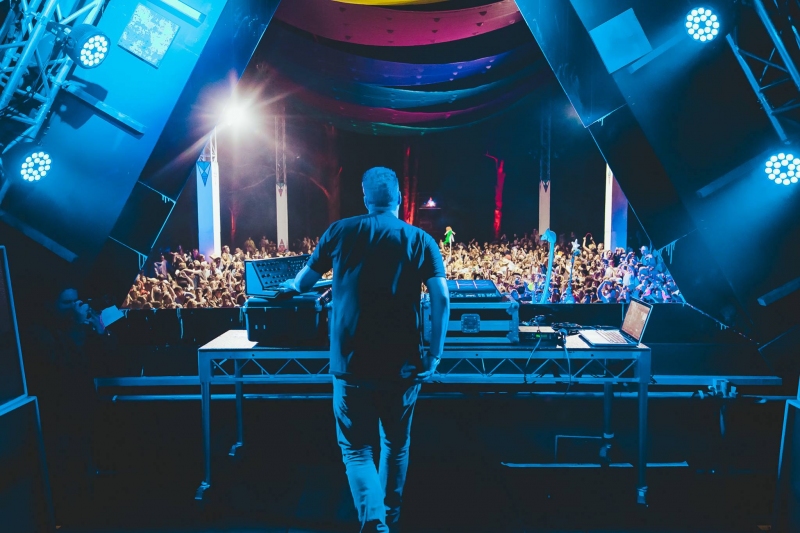 Angus & Julia Stone seemed like the only act capable of trumping City Calm Down but their palpable on-stage tension marred this attempt. It would of been more fitting to title the performance Julia Stone with Angus backing her up playing their songs. Even the stage design highlighted their disconnect with Angus and Julia separated by an invisible line they barely broke. And after seeing Julia it struck me there were so few women on the line-up. The night was wrapped up over at the Lost Disco stage with Anna Lunoe’s frenetic mix of trap and hip hop before Hayden James played what sounded like songs he would have made but never released intertwined with his own well-known tracks.

Day 2 of Lost Paradise dawned to be an exceedingly hot one. After crawling from my outdoor microwave (tent) I mustered the strength to journey to the festival’s epicentre, The Lost Village. The Lost Village was a pleasant space of food trucks, with eats from across the globe. Little did I know that what I was soon to consume was to be my only full meal for the following 24 hours – an enormous German hot-dog smothered in onions, cheese and mustard. It was simply delicious!

For the next half hour we sat in huddles, discussing debauchery from the night before and whinging about how shit we all felt. Our main line of discussion was the misconception that night one would be tame, which was so far from the truth. This was thanks to boogieing down in rapture to all things 90s at Paradise Club (the tiniest stage at Lost Paradise) - a quaint wooden cabin by the river, fronted with thumping speakers. To my friends and I, it soon became known as the ‘doof hut’. 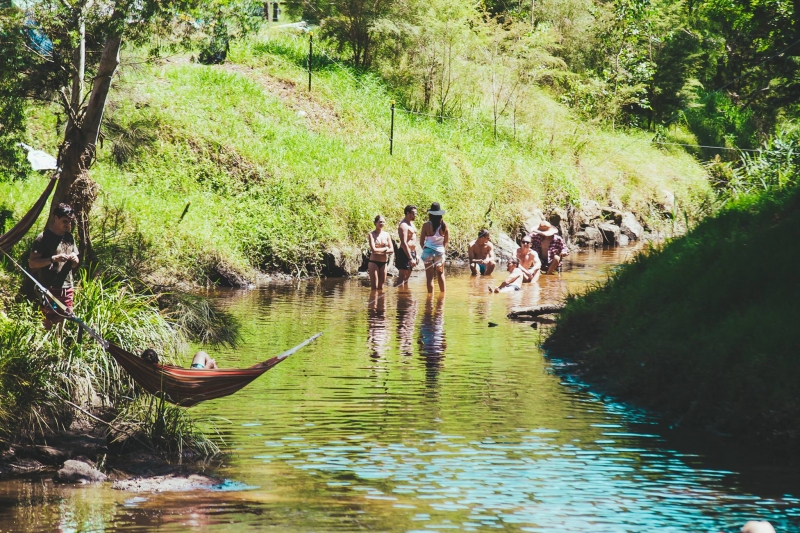 As the morning progressed, the temperature climbed; so on our return to camp the logical decision was a dip in the river. The fresh water proved a miracle, washing away a chronic headache and a sub par body odour. Now, at close to midday it was time to turn our attention to the sets we’d be treated to on day two. For my mind, those of importance included Touch Sensitive, Prosumer (Achim Brandenburg), Motor City Drum Ensemble (MCDE) and lord Four Tet (Kieran Hebden). This was an eclectic mix of dance music that I’d been hanging out for the moment I snared a ticket.

For the next three to four hours I engaged in delirious campsite chats with my mates, sipped on smuggled VBs, smoked ciggies in the sun and returned to the river on multiple occasions. Before I knew it, it was 5pm and at this point I couldn’t wait any longer to dance. With favouritism for all things house I headed directly to Lost Disco, the large technicoloured triangle stage. Strolling in I was suddenly amongst a fury of feet as blokes in wide brims and girls in summer dresses muzzed out to some afternoon tech courtesy of Carlos Zarate and James Fazzolari. The highlight of their set was a standout punter, an elderly fellow who couldn’t have been any younger than 70, cutting shapes shirtless with the biggest grin on his face. As it is with any pensioner who wiles out at electronic gigs, Gen Y were egging him on with screams of support, he was in complete euphoria. Age is all but a number. 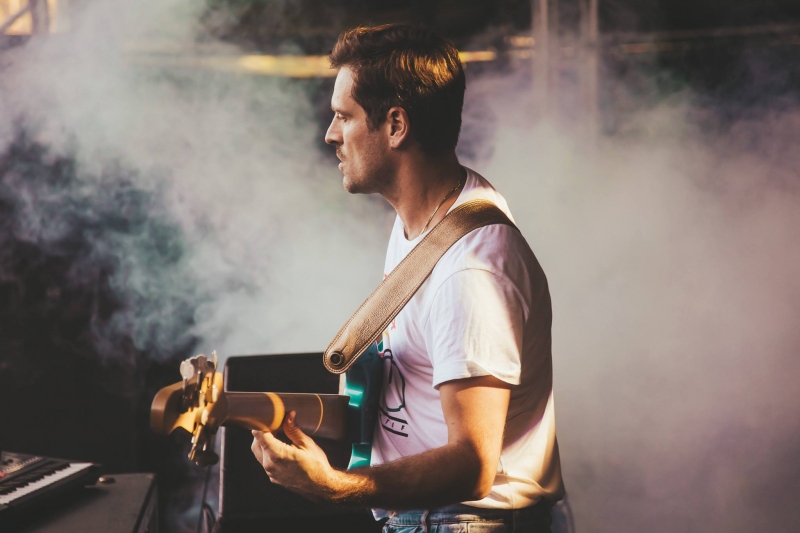 As dusk arrived, I scooted around to Arcadia (main stage) to witness Touch Sensitive and his signature bass licks. Pizza Guy was of course a stand out, as people climbed aboard shoulders, swaying along to that infectious synth scale. As the Future Classic bassist closed out with a boppy number he supposedly composed on a long haul flight, my mind was already in search of scuttling tech-house, namely, Berlin’s Prosumer. I can vividly remember being basked in a pink glow as Prosumer craftily drew the mosh closer together, we all shimmied as one. At multiple points throughout his set I was grooving shoulder to shoulder with complete strangers. It was fantastic!

If I’m referring to Four Tet as the lord of night two, then MCDE was our knight in shining armour. Stepping up to the plate at 10pm, the Stuttgart local had the crowd spellbound in the first five minutes of what was to be 150 minutes of funk bliss. Nonchalantly puffing durries, Motor City mixed through a ream of tunes none better than this gem.

As we closed in on 1am, a moment of planetary beauty took place. A full moon began to rise over the valley basking us all in light. Almost in unison, Four Tet appeared at the decks, throwing a wave, before cutting into a journey of sound. For the following two hours I was on a colourful railroad in my own mind, splashes of Latin American and hefty techno clipped my ears as the Englishman carried me along on his bizarre and spectacular frequencies. Hebden through us all when he threw down an instrumental cut of Justin Timberlake's Like I Love You, masterfully sliding it into his Percussions piece entitled KHLHI. It’s an absolute belter.

Rightfully so, those still beaming as Four Tet closed out gave raucous cheers, the vibe in the bush at this point was at fever pitch. Everyone was so god damn happy! And that would close out day two of Lost Paradise 2015 – we’d made it to December 31 in style!

After Four Tet left me feeling like I’d left Earth’s atmosphere and floated around the cosmos for three hours, I found it hard to believe the final day could throw down a trump card. But day three had a crucial weapon in its arsenal that I'd overlooked...

Big White kicked off proceedings on the main stage under the heat of the last sun of 2015. Their upbeat guitar-pop got the feet moving and the hips swinging until we'd danced ourselves back into shape with songs like You Know I Love You - even when we all told ourselves we couldn’t dance a minute longer after the previous night’s antics. After some self-induced rest time I prepared myself for one of my most anticipated sets of the festival. Of all the music I’ve discovered in the past year, I don’t think I can identify a group that embodies boogie more than Crazy P. And boogie we did. Crazy P provided the crowd with banger after banger after banger. As a sidenote, if anyone has the ability to stand dead still during a live performance of Like a Fool, I’ll eat my own hat.

The secret weapon I alluded to earlier had finally been unveiled in all its wild, wacky and wonderful glory - the creativity of some costumes was mindblowing. Coincidentally, it was in amongst the jellyfish, unicorns, avatars, fairies and other ungodly creatures where it felt as though  the walls were coming down. As I glanced around at the smiling faces hidden beneath all of the marvellous costumes, it was evident that people had stopped giving a shit about anything except where they were and what they were doing in that moment (and dancing their face-off). Sure this might sound cheesy as fuck, but it’s an undeniable feeling that doesn’t come around too often in festivals, or in life more generally. Not even a slap square on the nose could have wiped off the ridiculously large grin that sat pleasantly on my face. 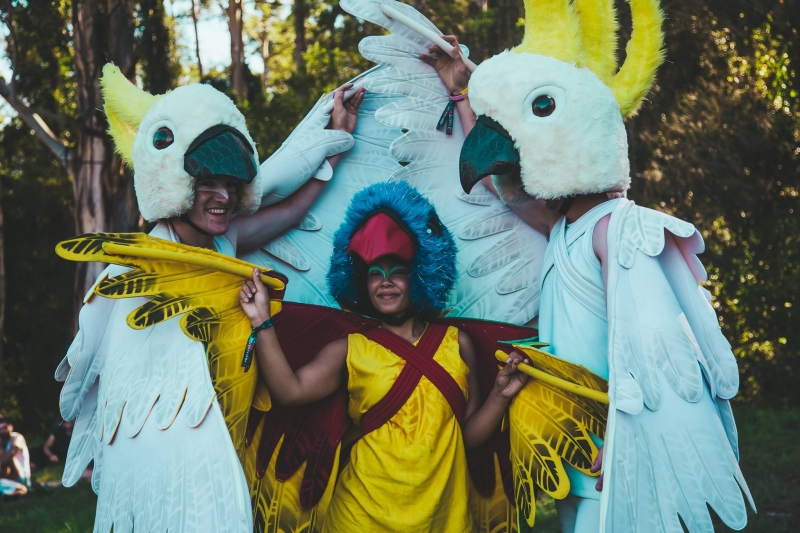 As Lost Paradise transitioned into darkness, I found myself returning to the main stage for a set I can only describe as musical wizardry. In a similar vein to his highly esteemed peers such as Four Tet, Jon Hopkins has an incredible ability to utterly hypnotise the crowd. Hopkins seemed to spend the first 30 minutes or so playing tricks on me. Every time you thought you understood, he’d throw a spanner in the works or do something completely unexpected. It produces a sort of uneasiness. And then, before you can come to terms with it, Hopkins has sucked you in and you’re left under his spell - your only option left to succumb. Watching the crowd move to Open Eye Signal, was one of the more intriguing things I’d seen in a while.

In recent years I’ve come to realise something that is frequently overlooked yet of paramount importance about music festivals: they are about so much more than the music. The layout of the site or the morning meditation and yoga classes (although they were far and away the best way to treat a dance-weary body). It’s about a group of strangers coming together and agreeing to co-exist. It’s about the collective energy of thousands. It can’t be forced and it cannot be created artificially. When a festival gets it right, everyone knows it. It’s that feeling you can’t put a finger on, or describe. It’s been three days since I left Lost Paradise, and I still can’t quite put a finger on it. 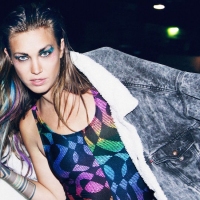 Five Minutes With ElliphantA brief chat with the Swedish star, in the country for some shows including Southbound this weekend. 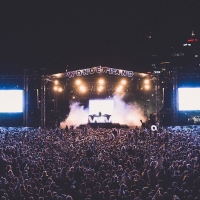