...and it's kinda crazy to see that the same shit frontwoman Lauren Mayberry was dealing with two years ago is still as present as ever today. We know that's "just how it is" or whatever, but at what stage do we stop using that as an excuse and stamp out this kinda rubbish. It's just average, and really depressing:

Dear anyone who thinks misogyny isn't real. It is and this is what it looks like. http://t.co/cLC97T8MxU pic.twitter.com/2bBZtw4yoL

And because it's still sadly as relevant as ever, here's Somayra's original piece from October 2013:

Earlier this year, electro-pop artist Grimes (Claire Boucher) hit out against sexism in the music industry, refusing to put up with the objectification and misogyny she and many others have faced via a BLOG POST. Grimes referred to incidents of molestation, unfair treatment of herself and dancers, and being the subject of patronising by colleagues:

“I’m tired of men who aren’t professional or even accomplished musicians continually offering to ‘help me out’ (without being asked), as if i did this by accident and i’m gonna flounder without them. or as if the fact that I’m a woman makes me incapable of using technology.  I have never seen this kind of thing happen to any of my male peers.”

It's not hard to imagine the double standards artists like Grimes are subjected to, given that there's still a gender gap and accompanying glass wall in many lines of work. Chauvinism is nothing new, but that doesn't mean something shouldn't be done about it – in fact, it means the opposite.

The nature of the music industry is heavily reliant on image – and sex appeal is an unmistakably common promotional tool, therefore the belittling of female artists is unfortunately almost to be expected. Singer/songwriter Kate Nash told the INDEPENDENT, “In the media there's a lot of focus and pressure on the way that we look. I get asked in interviews why I don't care about being sexy, and why I don't do sexy photo shoots. When I first started, they highlighted my acne in the tabloids.”

CHVRCHES frontwoman Lauren Mayberry also recently broke her silence regarding the issue, posting this screenshot on the three-piece's Facebook page: 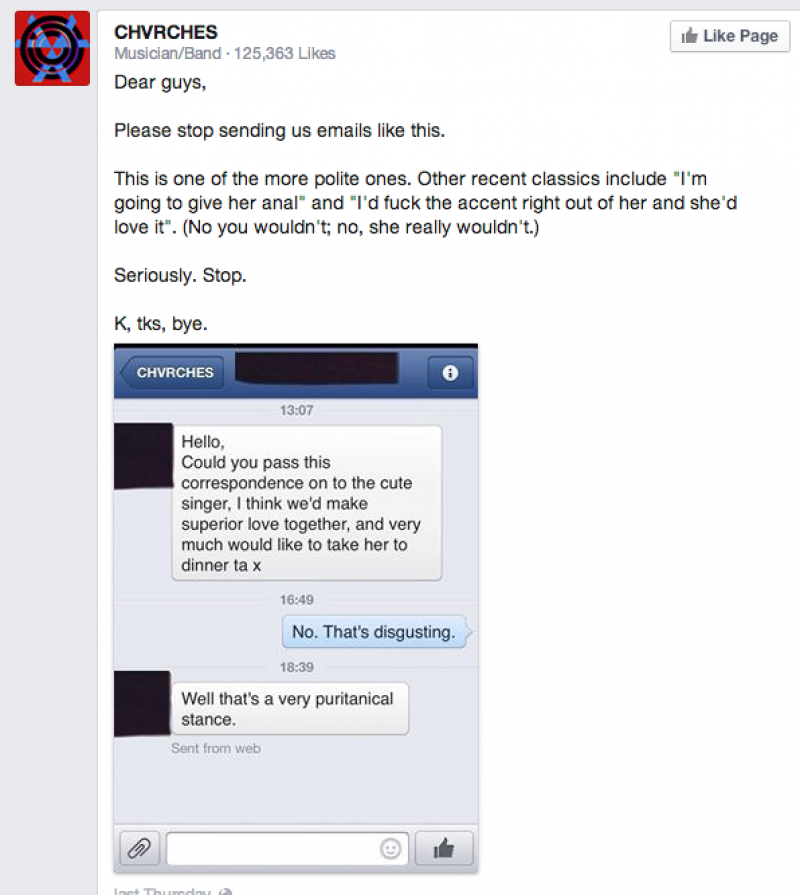 A week later, Mayberry wrote about the response, noting, “Comments range from the disgusted and supportive to the offensively vile.” She went on to give examples of the latest vitriol: “My current favourites from the latter category include: 'This isn't rape culture. You'll know rape culture when I'm raping you, bitch'; 'I have your address and I will come round to your house and give u anal and you will love it you twat lol'; 'Act like a slut, getting treated like a sluy [sic]'; 'It's just one of those things you'll need to learn to deal with. If you're easily offended, then maybe the music industry isn't for you'. But why should women 'deal' with this? I am incredibly lucky to be doing the job I am doing at the moment – and painfully aware of the fact that I would not be able to make music for a living without people on the internet caring about our band. But does that mean that I need to accept that it's OK for people to make comments like this, because that's how women in my position are spoken to?”

Mayberry's point is more than fair, and wholeheartedly accurate – to say that such vile behaviour should be tolerated simply because it's the current norm is not good enough. It isn't just the messages and threats artists put up with, but acts too. Kate Nash, among a group of female artists revealing their experiences on the issue through the Independent, also stated, “On tour I was dancing in the crowd and a guy groped me. I had to address it onstage and make a point of it. Another time, a guy came to the front and shoved a condom in my face, and I was really uncomfortable.” Not only is behaviour like this sexist, but it's blatantly disrespectful on a basic human level.

Pop music is a reflection of the status quo it's been born in, andthere are no doubts that the world we live in is still very much patriarchal (as is made evident by the constant objectification of women), especially in the media and arts. This is further proved by the fact that those who speak out against aspects of sexism, misogyny and rape culture are not infrequently labelled as misandrists. To be chastised for wanting equality is not fucking alright. Grimes wasn't afraid to touch on this in her initial post, stating, “I'm sad that my desire to be treated as an equal and as a human being is interpreted as hatred of men, rather than a request to be included and respected”.

Perhaps the most prominent example of double standards in performance as of late is the unavoidable media shitstorm over Miley Cyrus at the VMAs. Sure, what she did was controversial, and probably not what kids who'd grown up on Hannah Montana would've expected, but what about the other part of the equation – Robin Thicke? Here's a 36-year-old husband and father and the other half of the same performance, yet outrage over Thicke's part in it was close to non-existent. To make the scenario that much better, keep in mind the song he was performing was Blurred Lines. Blurred fucking Lines. Thicke singing a degrading song with now-infamous rape culture undertones while grinding on Miley – something about this picture really isn't quite right.

The notion of the song itself and its ties to rape culture have been questioned by many, including YFH's Georgia Hick, whose ARTICLE entitled “Are You Really That Thicke?” ends with “[the] major reason the feminist movement still has so far to go in so many areas is this unshakeable focus on issues that are relatively trivial. If anything, the feminists currently in question are guilty of slut-shaming at its basest level, if they’re truly so mortified by the very possibility that a woman might “want to get nasty”. I think it’s time we stopped blurring the lines of what’s offensive and what isn’t, or better yet, made up our own minds about it.”

I'll admit, that last part really pissed me off. The backlash over the song and its video was not based on merely the sexualisation of women, but more so to do with the lyrics. Offense was taken because parallels can be quite easily drawn between Blurred Lines' lyrical content and phrases reportedly said to survivors of sexual assault by their rapists. Startling comparisons were featured in THIS POST by Sezin Koehler of The Society Pages.

The line that's blurred isn't the one between what's offensive and what isn't, it's the idea that there's a blurred line between consent and non-consent (which is pretty damn ridiculous). 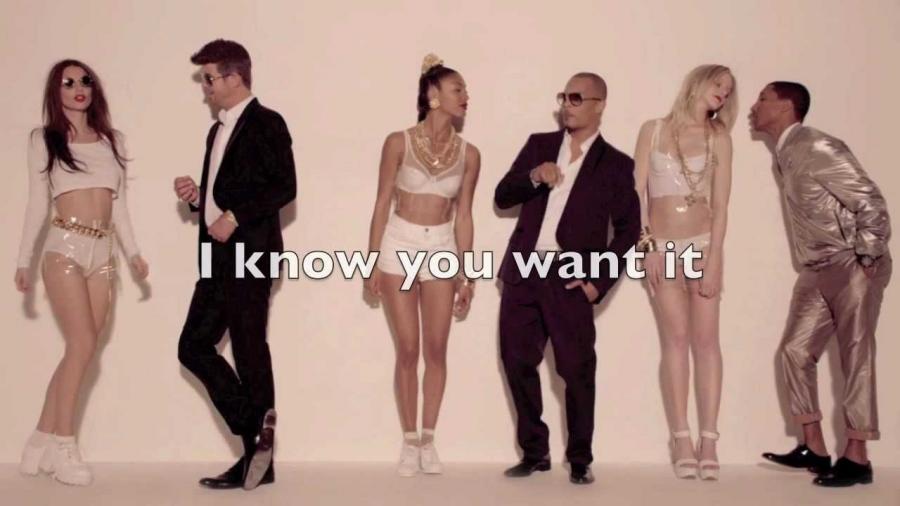 Koehler's article mentions “Thicke further sings “You’re a good girl,” suggesting that a good girl won’t show her reciprocal desire (if it exists). This becomes further proof in his mind that she wants sex: for good girls, silence is consent and “no” really means “yes”.” Calling an adult female a 'good girl' in this context is, indeed, a way of saying the subject of his unwanted advances is pretending to be disinterested to maintain an image of purity. Additionally, though, it's also used as a plainly condescending term – another thing Grimes refers to in her original post – “im tired of being referred to as ‘cute,’ as a ‘waif’ etc.”, going on to add the definitions of the two words.

Despite setbacks, women are succeeding in the music industry: Lorde has just topped the US Billboard chart, the 2014 Laneway line-up is dominated by top-tier, female-fronted acts, and female DJs like Alison Wonderland (who sadly deal with sexist remarks on a daily basis on something as simple as an Instagram photo or Facebook status update) are at the top of their game here and overseas. It's high time that the harassment stopped, the inequality stopped, and that females were treated with the same amount of respect that their male counterparts are.

Feminism isn't a word used to describe a hatred of men, or complete female supremacy or domination, or bigotry, or 'slut-shaming', or any histrionic pseudo-definition allocated to it or arising from connotations; feminism is the concept of seeking – or demanding – gender equality in a world that is so heavily bereft of it. 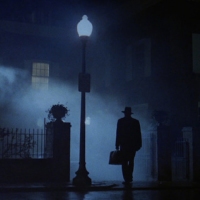 The Suburban ExorcistsRiding shotgun with a small team of people who fight demon possession. 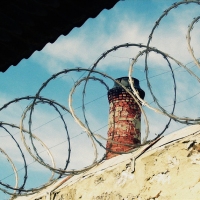