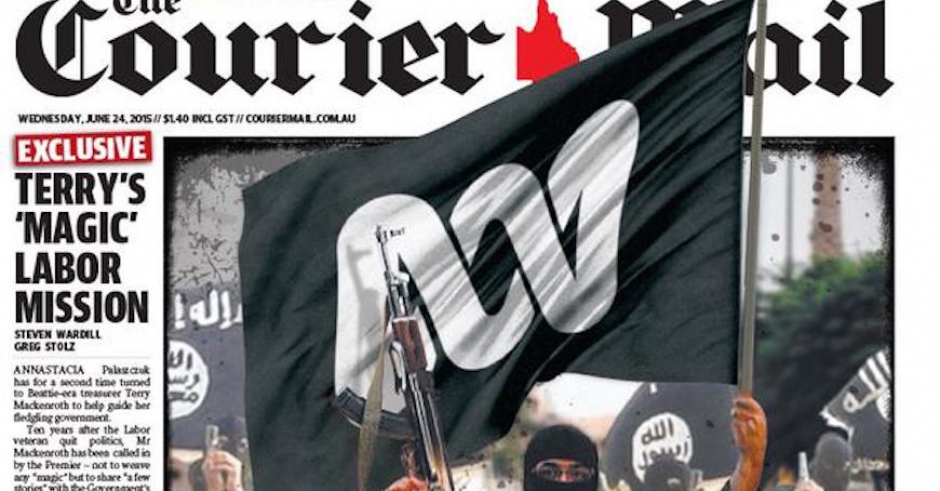 As loathe as you might feel having to spend every week listening to your co-workers, friends and family spend the week arguing about whatever happened on Q&A on Monday, it’s become clear that it’s the most effective mode of democratic conversation on Australian TV. It’s difficult to miss some controversial topic on immigration, media or free speech, and sometimes all three are rolled into one, as we saw this week. Zaky Mallah, the first man to be arrested and charged under the government’s then-new anti-terrorism act, appeared as an audience member on the show, and directed some pretty pointed questions to Liberal MP Steven Ciobo, an outspoken supporter of the government’s planned citizenship legislation. Mallah was acquitted of terrorism charges in 2005, having served a spent conviction for “threatening violence against a Commonwealth official”. 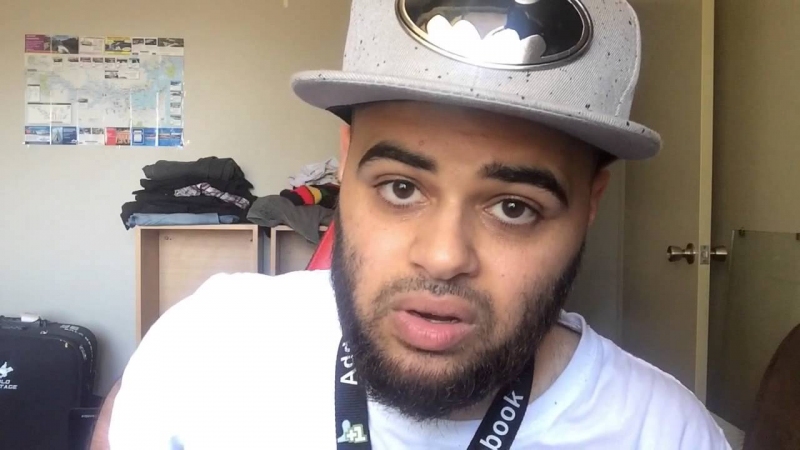 "As the first man in Australia to be charged with terrorism under the harsh Liberal Howard government in 2003, I was subject to solitary confinement, a 22-hour lockdown, dressed in most times in an orange overall and treated like a convicted terrorist while under the presumption of innocence," Mr Mallah said. "I had done and said some stupid things, including threatening to kidnap and kill, but in 2005 I was acquitted of those terrorism charges. What would have happened if my case had been decided by the minister himself and not the courts?"

Mr Ciobo was direct in his response, saying that he would “sleep soundly at night” knowing that Mallah would be out of the country, and that he believes the only reason he was acquitted was due to a “technicality”. Mr Ciobo had previously answered questions on the proposed citizenship legislation – set to hit parliament this week – but refused to answer how any judicial review would work in the system of law, indicating that not much transparency yet existed in the process.

What has followed in the subsequent days since Monday night has more or less been a firestorm of argumentative debate, contradiction and assertion which has spanned the entire Australian media landscape. Things came to somewhat of a head when The Courier Mail, Herald Sun and Daily Telegraph – all three being News Corp papers, if that wasn’t readily obvious – published a front cover of ISIS militants holding black flags with the ABC logo superimposed over them, the headline “IT’S YOUR ABC” in big, white letters over it. 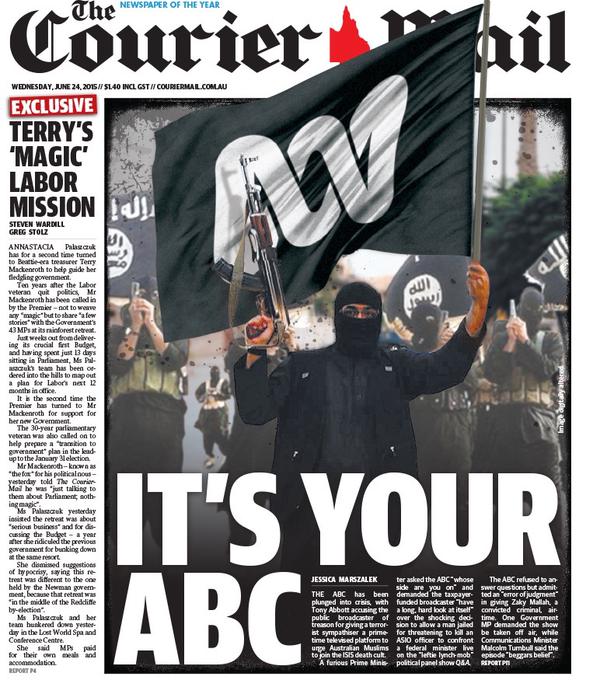 All of Australia’s media outlets have now had something to say about Mallah’s words, many with very different angles and opinions. News Corp’s cabal have been the most vicious in their attacks of our national broadcaster, but others have accused that the ABC leadership have completely avoided the issue, and were completely culpable in Mallah’s appearance on the show. Whether or not such assertions are correct, it’s clear that the damage done to the ABC has been torrential, and that this could be yet another nail in the coffin for what the broadcaster’s supporters call “free speech”, and what its detractor’s label “socialist propaganda”. Even Tony Abbott called the whole thing the result of a “leftie lynch-mob.” The man does love his extreme metaphors.

There’s no doubt that Mr Mallah’s comments were at best inflammatory and at worst idiotic. He has seemingly walked a very fine line between being an Islamic activist and potential terrorist, having been on the front lines in Syria and supporting conflict in the area. He’s also something of an ignorant attention-seeker, if the last few years are anything to judge by. But that’s only part of the story, funnily enough the part of the story that Mr Ciobo, Abbott and apparently the entire government frontbench want you to know. Indeed, Mr Mallah was charged with a pretty serious accusation, but reports from around the time of the case describe him as a confused young man, one that felt a large amount of anger about the state of the Islamic diaspora in Australia. There wasn’t much impetus on either side of the court to label Mr Mallah as dangerous, and it’s also worth keeping in mind that this was the first time the national anti-terrorism laws were in practise. According to many reports, including one from the Melbourne University of Law, we still don’t know if these laws are even effective, given the rush we’ve been in to enact them over the last 10 to 15 years. And while all this can be seen as playing the devil’s advocate, keep in mind that Mallah is a vocal proponent not of ISIS, but the Free Syrian Army, the force that we actually support, along with the US and its NATO allies.

But this is not about an admonition of Mr Mallah’s words, or indeed the context of any one individual’s opinion. The more pressing matter is how the event has been used as a flaming spear against the ABC, and how the broadcaster is more or less powerless to react. ABC CEO Mark Scott has cowered before the onslaught, cutting an interview with Mr Mallah that might’ve shed more light on the issue. Instead, what we got was faux-news program The Project allowing Waleed Aly to pick holes in Mr Mallah’s character and completely dismiss the issues of Muslim marginalization in Australia that have so clearly lead to Mr Mallah’s anger, misdirected or otherwise.

“I don’t feel like you’re taking responsibility for this,” Aly asked Mallah in a pre-taped interview. Responsibility for what, exactly? For appearing on a TV show he was invited to and speaking his mind? For being angry enough to condemn the actions of his own government? Because, as loathe as I am to use the Herald Sun to contradictorily back my argument, Aly himself seems fairly ready to do that when he wants to. And while I respect Aly for his work in the community, it’s hard to believe that he’s actually taking the debate seriously when he treats the interview like a Today Tonight journalist. Fuck, Mallah appeared on the very same show late last year to say that we was “totally against” Islamic Australians joining ISIS or any other terrorist organisation. The entire cast of The Project – Aly, an ex-weather reporter and a gaggle of dressed-up comedians – seemed ready to believe him now. Sure, what Mallah said was dangerous, but why throw him to the sharks now, when there’s enough anti-Islamic sentiment being spread by the “newspapers” that already clog the national media?

Whether or not you are a supporter of the ABC – and I think you should be – it should at least make you question why the government, along with others, are using it as a platform yet again to commit to long rants on the potential danger of people like Mr Mallah, the threat posed by ISIS, and the “ridiuclousness” of allowing people like Mallah to talk publicly, as he has the right to do. Jonathan Holmes has written a very good article, explaining why. In it, he references the words of Abdul-Rehman Malik, a British counter-terrorism expert who stated that both our country and his are going in the “wrong direction” by being so heave handed and draconian in both legislation and rhetoric.

"And remember there's going to be kids - and it's already happening - who've gone out there, who survived, and who want to come back. Don't take their citizenship away. They could be our best allies… They're going to be the best ambassadors to say, 'You think you're creating a utopian society out there? You're not. I've seen it, it's hell; let's not go down that route'. "

The only thing that the words of Tony Abott, Malcolm Turnbull and the whole cadre of characters who are pushing for more “secure” anti-terrorism laws are doing is further alienating the very group that are in danger of becoming militant. Far from being completely correct, I think Mallah was right enough in sharing his belief that the rhetoric from people like Mr Ciobo are a catalyst to that. The kids fighting in Syria are not there because it looks fun; they’re there because they don’t feel like we accept them. Maybe we should remember that before pointing the finger so readily at someone who speaks their mind. Or, at least, that no matter how much of an idiot you are, you still should be able to speak your mind – there’s plenty of countries where that’s not a reality. 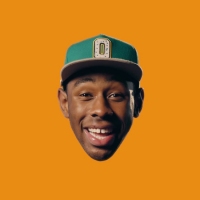 Banning Tyler, The Creator Is Shouting Up The Wrong TreeDebunking some of the myths from Collective Shout's one-sided scare campaign. 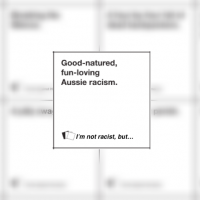