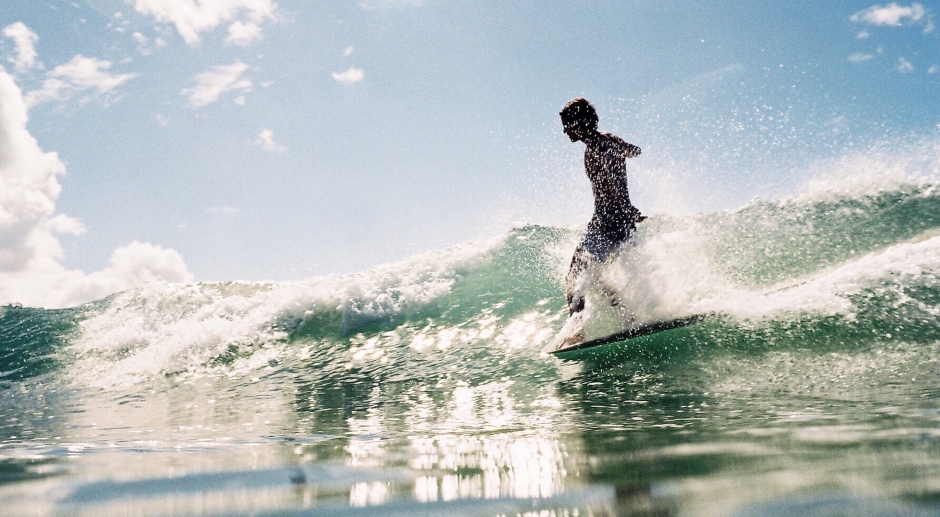 Posted By Dexter Wright 4 years ago

Beck Payne is a surf/lifestyle photographer located in Queensland with an epic style and never-ending class to her pictures. Whether she’s in the ocean shooting breaks, or on dry land shooting bands she is doing so with elegance and beauty. Capturing beautiful lighting and 10/10 sunsets on film, she is one to keep your eye on in the future.
I sent Beck a few questions and asked for a few photos in return. Check out her response and those photos down below. 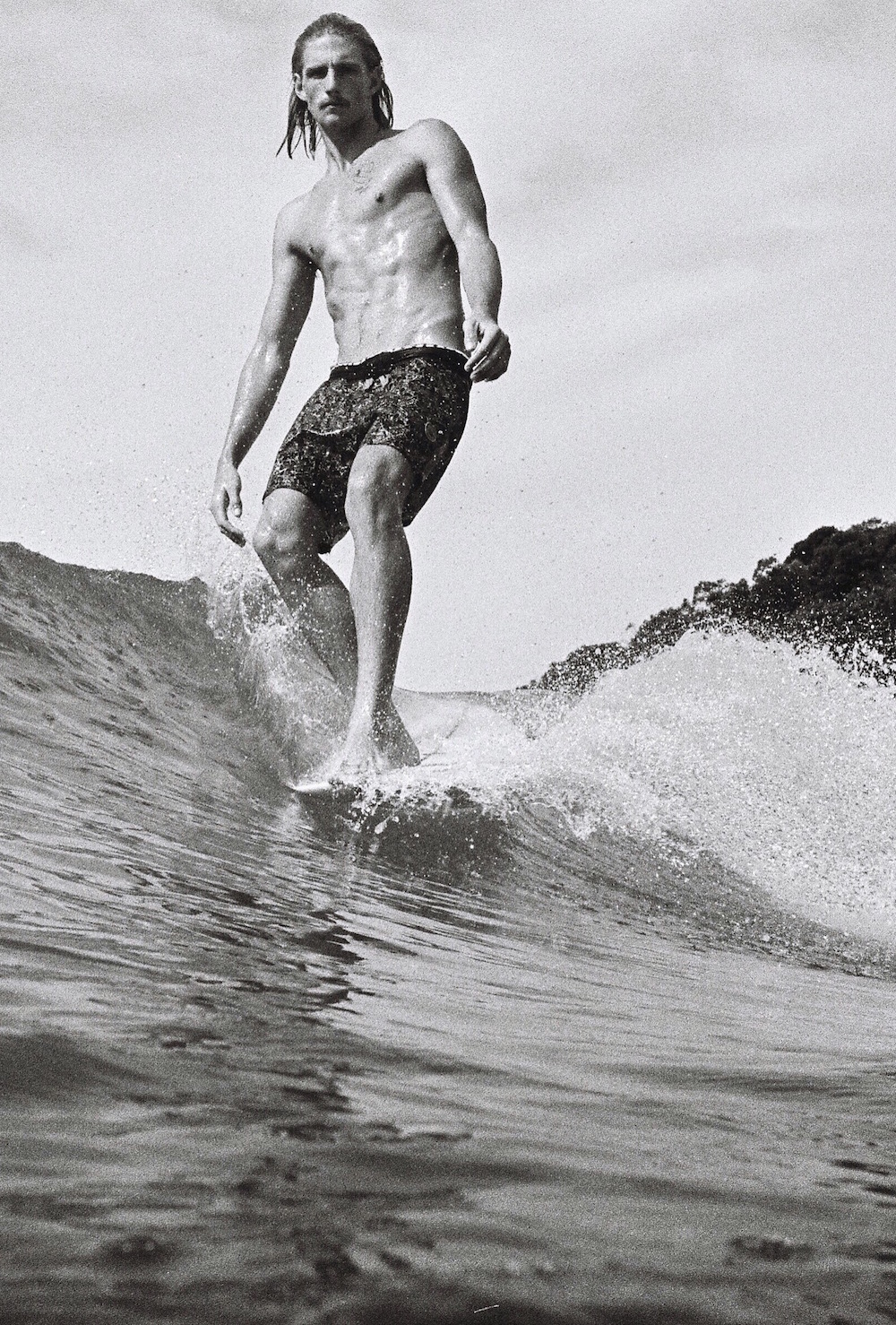 I don't really know where it started for me. I've always had an interest in photography but if I had to pick a defining influence I would give credit to a Sunshine Coast photographer, Sebastian Robinson (@sea_bass). He didn't physically put a camera in my hand, but he inspired me to start shooting in the water. I loved surfing but am completely uncoordinated, and never thought I'd be able to afford a water housing - if it wasn't for him I wouldn't have known about Nikonos cameras or the Nikonos Project (@nikonos_project), they made it so accessible to start. And Sebastian's images are just incredible, even more so considering they're shot on film! 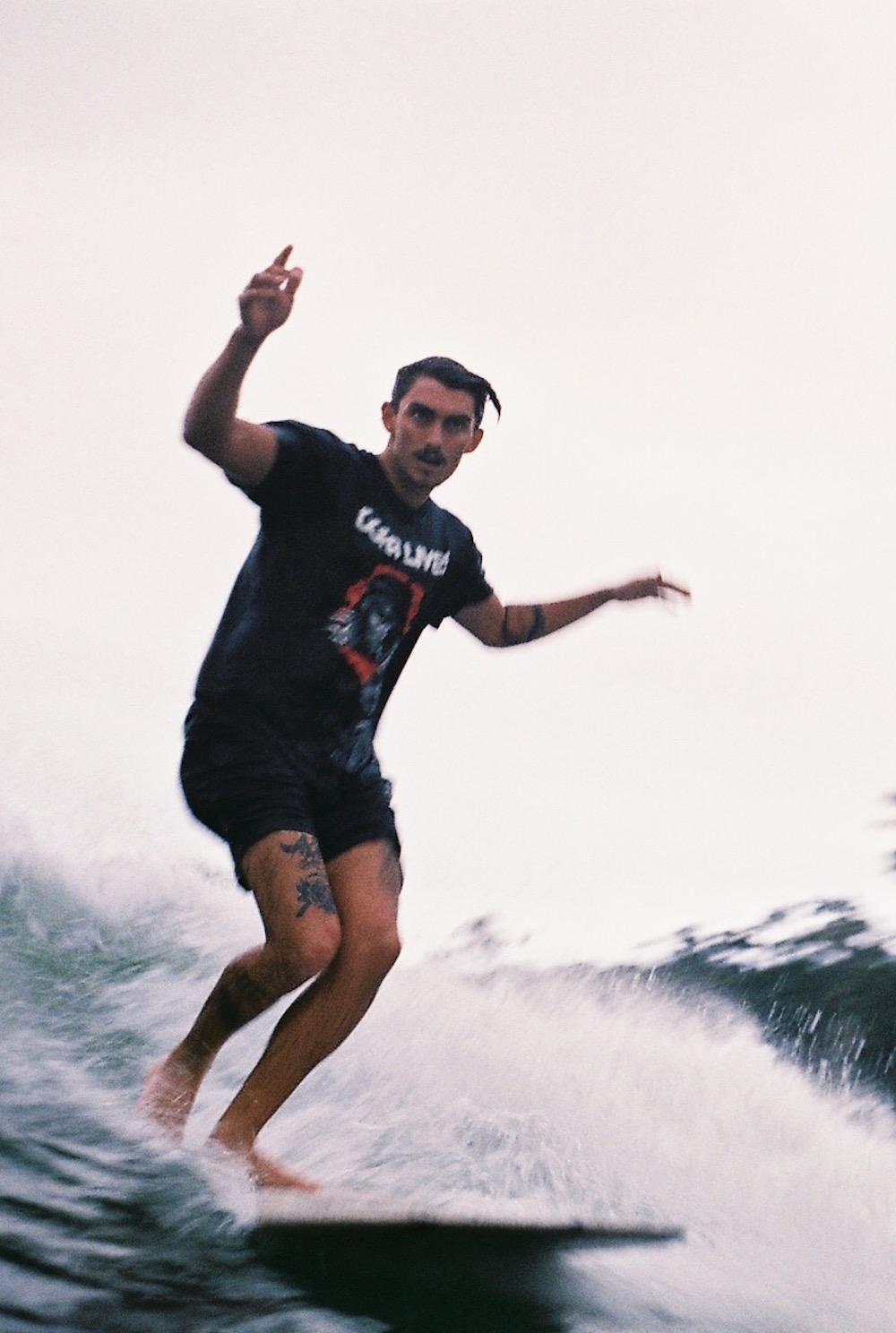 I'm always messing with my Nikonos, it will always be my favourite. I actually lost my old Nikonos in the surf and have just bought a new one with a strobing flash kit - can't wait for some waves so I can try it out!
Next thing I want is a medium format or a Holga to play with some lomography.

You always seem to be in the right place at the right time. What’s your secret?

Don't be afraid to get close! I like to get really close - especially in the surf, some people would even say too close. And get to know your subjects; having a connection with the people I'm photographing has improved my images tenfold. It also helps because they know what you're about and what you're doing, and they almost forget you're there so things are natural. 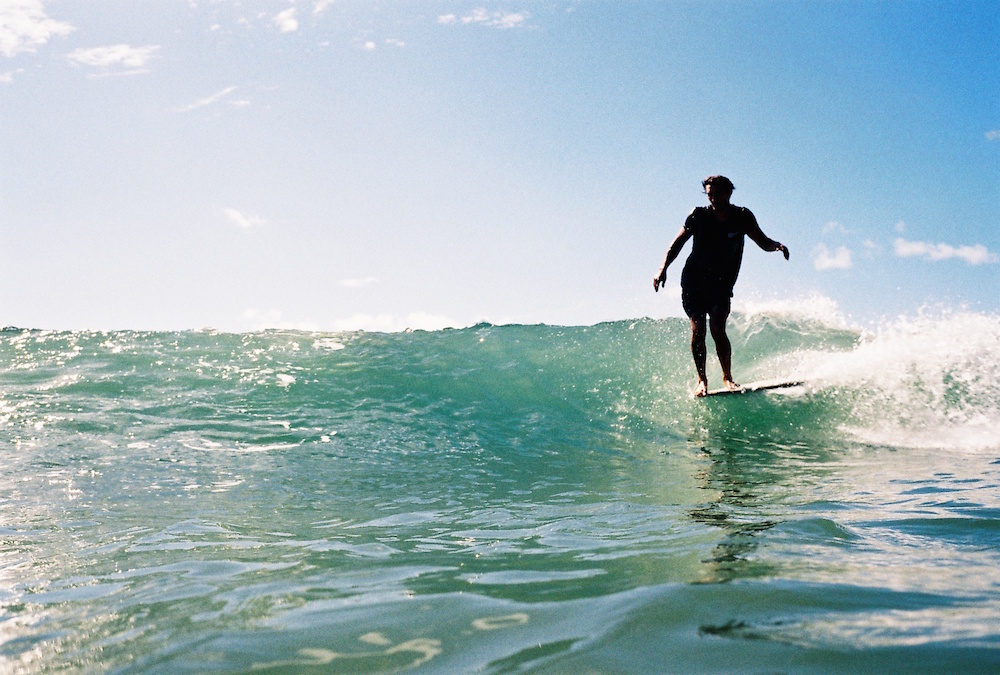 There was an awesome afternoon at First Point when the waves were super consistent and clean, and a great crowd was out, but my film advance kept getting stuck; I missed so many shots trying to fix it between ducking sets. That, and the roll that was inside my old camera when I lost it - I'll never know how good those photos were. 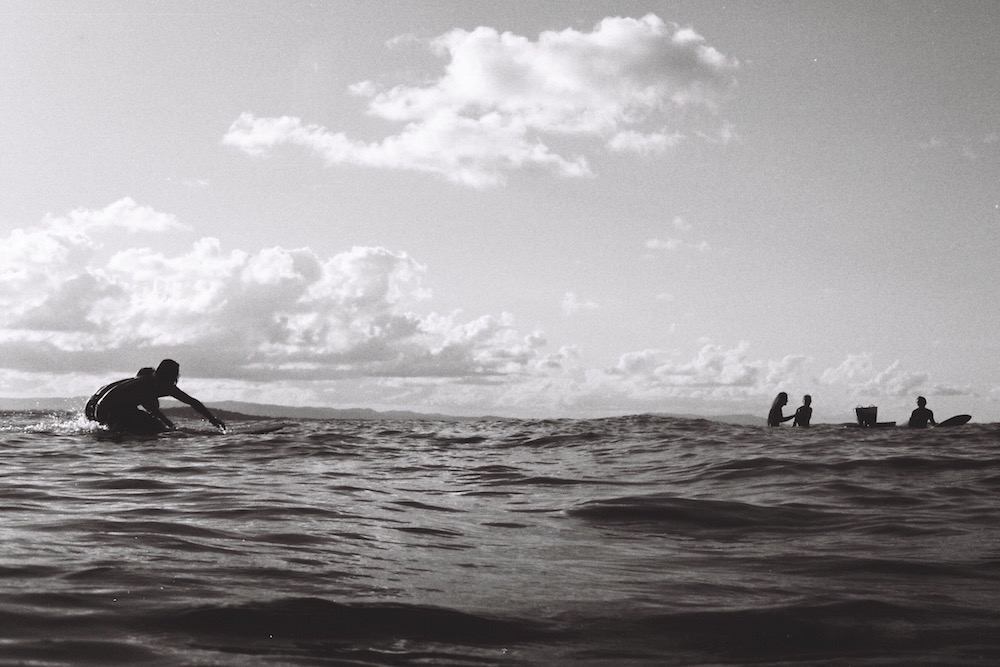 This is such a hard question to answer, I know I'll forget so many people. Any of the photographers that I follow on Instagram? Brydie Mack (@wolfcubwolfcub) has brought film back into the fashion industry, and absolutely nails it - Cameron Hammond (@cameron_hammond) also. Woody Gooch (@woodygphoto) and Crille Rask (@raskal) both have their own great aesthetics. Tom Hawkins (@tbhphoto) just has the absolutely dream job in my eyes, if I could swap lives with anyone it would probably be him haha or Corey Wilson (@corey_wilson).. #hireme

Damn, this is another really hard one. I don't necessarily think it's my best photograph but I have a really sweet spot for this picture. It's from the Noosa Festival of Surfing in 2016, I had only just started shooting surfers and it was a packed afternoon in the national park. As busy as it was, there was such a relaxed vibe with party waves and beers, I shot until dark. The camera I used didn't have a working light meter so I wasn't sure any exposures would even show up on the film; this one was just so sharp and clean, I couldn't wipe the smile off my face when I saw it. 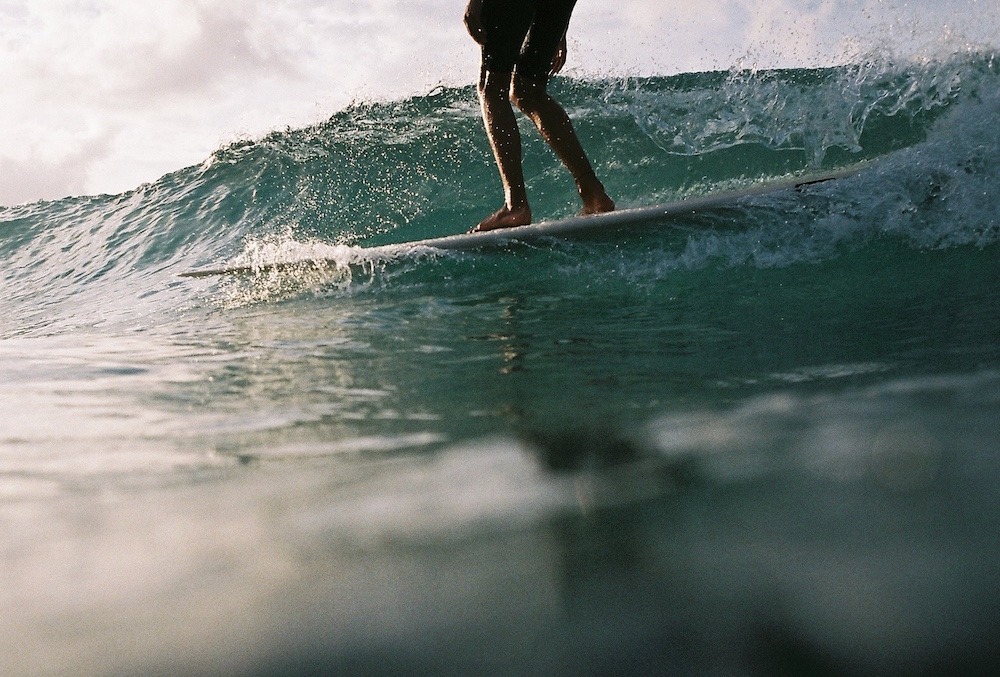 Do you listen to music while you take photos/edit? If so what album or band in particular?

I'm always listening to music, 90% of the time I have headphones in. I listen to such a broad range of artists depending on my mood and what I'm shooting. I think music has a great power of creating atmosphere so I try and match that to the emotion I want to emulate in my pictures. The day they invent waterproof music players/headphones is the day I can die happy. 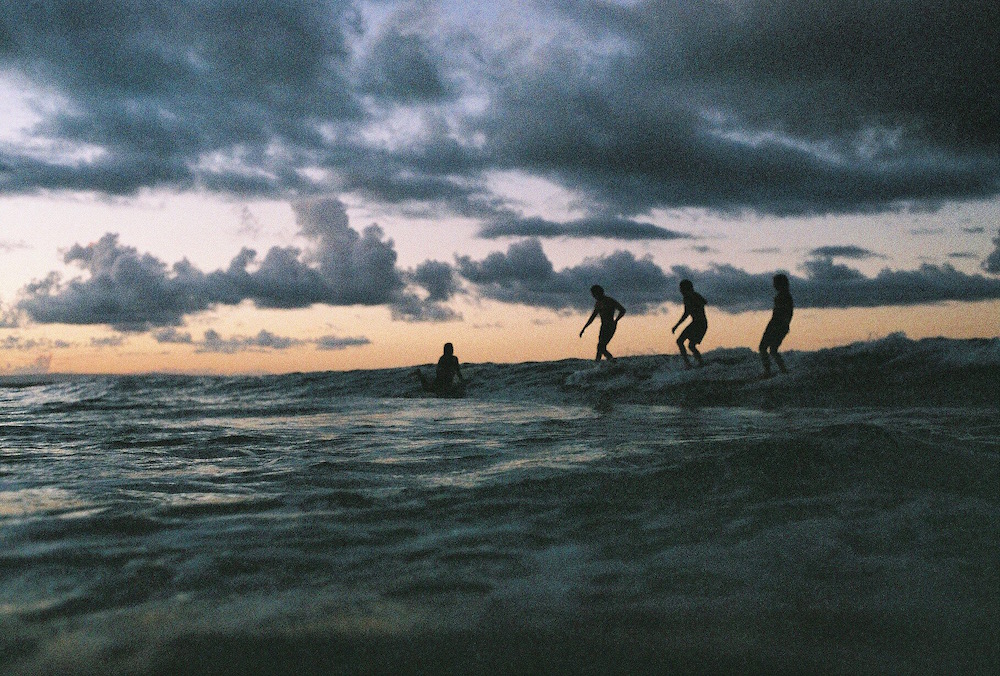 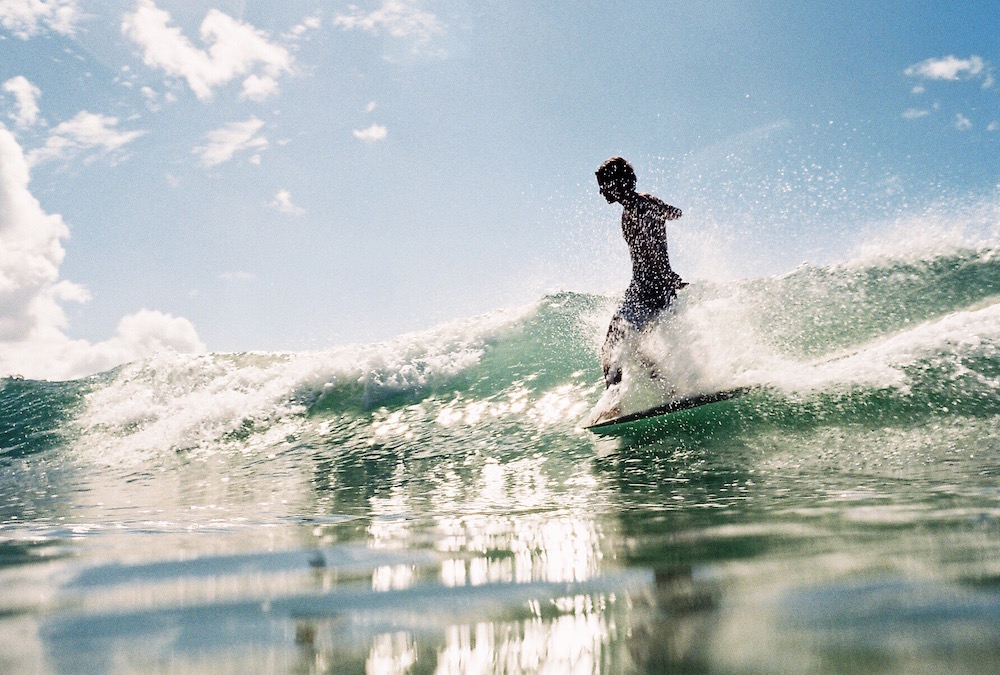 Anything surf related anywhere tropical, I'm easily pleased haha. I'd love to shoot Teahupoʻo - such an amazing and unique wave in the most beautiful surrounding; what more could you want? 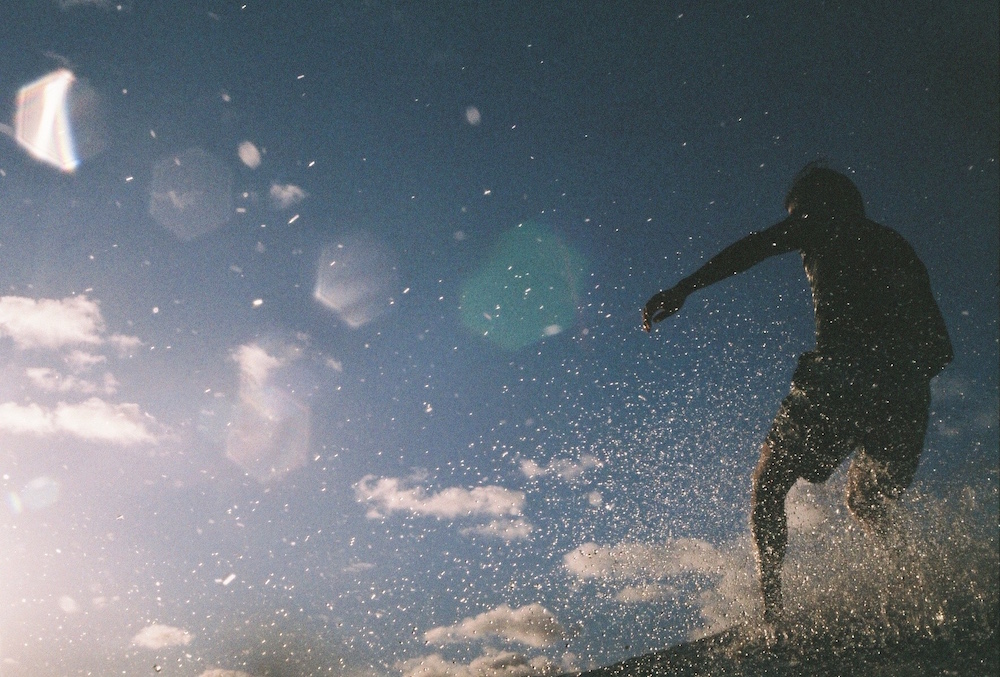 Do you prefer sunrise or sunset for shooting?

I'm not a morning person - I love being awake for sunrise but I don't like waking up for sunrise. Plus the colours of sunset are incredible on film, they're so enhanced with the purples and golds. Dusk is my favourite time of day, followed by night, whether I'm shooting or not - I try and see the sunset everyday. 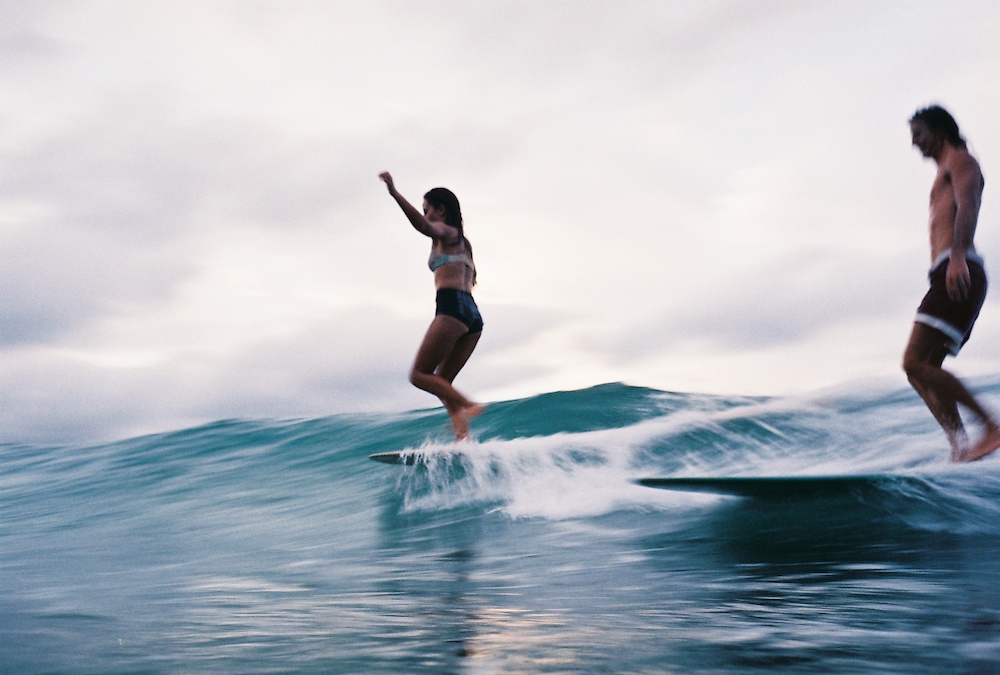 There are so many amazing up and coming photographers on the Sunshine Coast that I'm inspired by. I banter with Kane Brown (@kanebrownphoto) and give him a bit of shit haha but his photography is incredible, I definitely look up to him. Ben Osborne (@benosbornephoto) and Harry Mark (@harrymarkphoto) are paving the way, in my opinion, for surf culture photography. I think the best thing about all three boys is you can regonise their photographs straight away - in such a highly saturated visual world it's a huge achievement to have a style that's individual enough to have immediate recognition. Patrick O'Leary (@patrick_oleary_) is kind of my sensei and Matt Cuddihy (@mattcuddihy) is just one of those annoying people that's good at everything :p 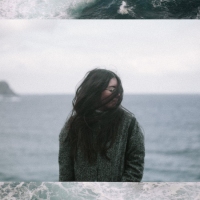 Behind The Lens: Greta WolzakWe asked our new work experience kid to interview his favourite photographers, next up - Greta Wolzak 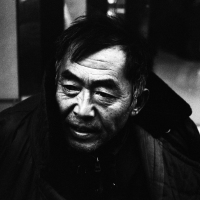 Behind The Lens: Zev WeinsteinWork experience kid interviews his favourite photographers, next up - Zev Weinstein.

Catch 'em on their Clarity tour around the country this November/December.