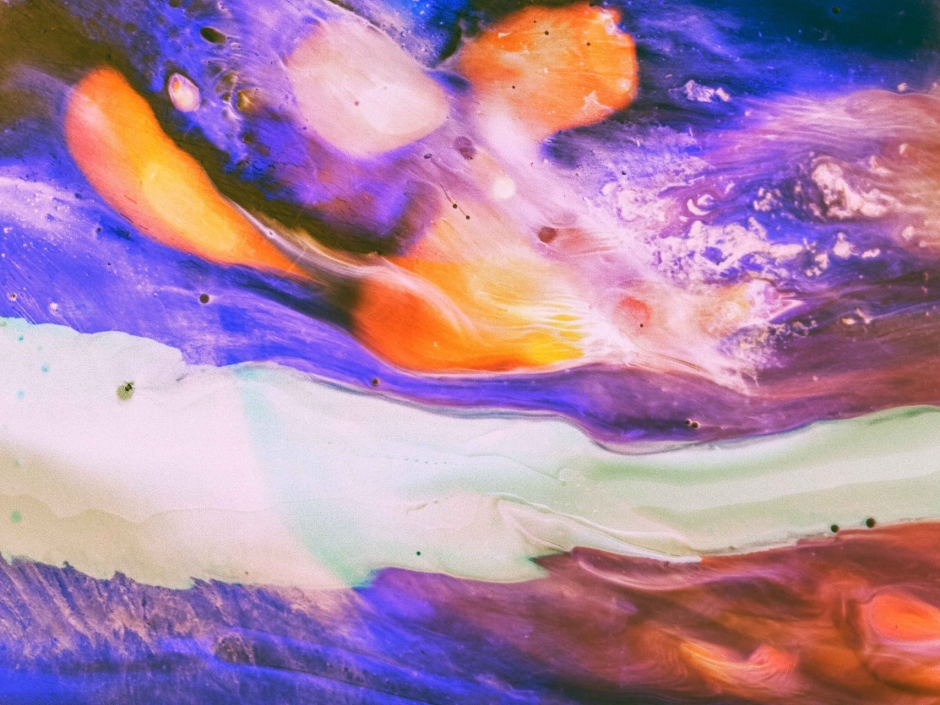 "My experience of life is that it’s a bleak, confusing, treacherous yet utterly beautiful experience."

You know that thing that happens when you look to the sun with your eyes closed for a while and eventually you start to see a whole heap of different colours and patterns? Wait, is that even safe? Probably not. Anyway, think of that and combine it with some sort of unearthly dreamscape. That’s my best attempt at describing Brighton based artist Jack Hardwicke’s artwork. It’s mystifying and difficult to define - which is the real beauty of it.

Was there something specific that made you start making art? When did you begin?

I’m not sure there was a specific no, I started taking photographs about four years ago - it was a deliberate attempt to pursue something. At some point over the next 18 months my practices evolved from film photography into something completely different. I think about two years ago I started creating work that I would be happy to call art. In that sense there has never felt like a definitive point. I’ve no formal artistic education and it never really interested me growing up. It’s still kind of strange that it ever happened.

How would you describe your work?

That’s a good question, because I try not to think so consciously about what I am doing (probably one of the few aspects of life I don’t always overthink). I guess my work is of an abstract nature, I definitely like to think of my stuff as something otherworldly, something celestial, unknown or unseen.

Where do you draw inspiration from?

At the moment I am increasingly inspired by other visual artists. That’s a little new for me as I used to be able to remove myself from the work of others but this has become increasingly difficult and frankly, I love looking at art. The more commissioned work I get, the more I have looked for inspiration from others. When one of my favourite artists or designers puts out a piece of work and I look at it and think ‘holy shit that’s perfect’ that pushes me in a couple of ways. There might be something specific that I take away from the work or more generally speaking it just pushes you to try and achieve that same level. I think most people who create would agree that feeling satisfied with your work is often a fleeting experience, and soon replaced by a feeling that what you’ve just done isn’t quite good enough. I think that’s probably the most important thing in terms of keeping yourself inspired.

I read an interview with Michael Cina last week, he’s one of my favourite designers and it was an interesting piece so I messaged him to say as such. What he wrote back was simple but great. He just said ‘keep moving forward’ and I think that’s important in life, not just artwork. It’s hard to maintain momentum but it’s important artistically to always try to evolve and progress. It’s kind of simple but yeah, ‘keep moving forward’.

What do you think is the most important component of creativity?

Identity and intuition, definitely. I think it’s probably very difficult to create something completely unique, because people have been making shit for centuries. But as people I think we are still all unique, and that should come across in anything you create. Try to create not recreate. I’ve always tried to stay true to myself in my work. I work from a personal space, mostly by myself and contained within my own brain, and though I’m increasingly inspired by external sources the core of what I do comes through my own intuition - ‘This looks good, this doesn’t, I’m going to do this and make that’. There are only a few people whose opinion on my work I value, and even then I would disregard that opinion in preference to my own instincts most of the time. Fundamentally, the more time you spend with people, the more you realise we’re all a bit weird, in the sense that seemingly no two people are the same, same motivations, same preferences, same philosophy - as much as art is quite a saturated field, if you stay true to yourself you’ll probably make something that has its own identity. 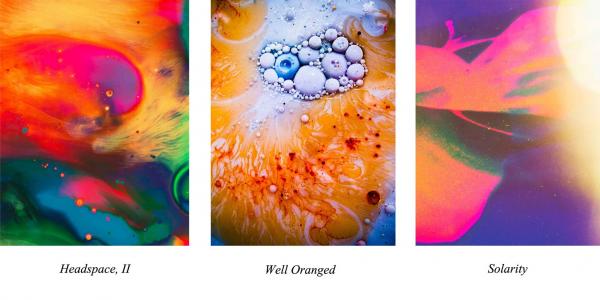 How has making art helped you?

Art symbolises freedom and expression to me and that’s something to aspire to. The artistic lifestyle is not for everybody, I get that, so I don’t want to come across as pious or self righteous but it seems to suit me. At least pursuing that dream gives me a reason to get out of bed every day (or most days) and show up for my day job, and exist like a semi-functioning real human being.

More fundamentally in my case it has been extremely therapeutic. About 6 months before I started taking photographs I had a complete mental breakdown. I was in complete inner turmoil and extremely distressed. The outlook felt bleak. Creating things has been a way to turn that inward focus out. I draw on those feelings and those experiences a lot and it’s definitely helped hold those enemies at bay. Though I am probably somebody who will always be battling with myself. My experience of life is that it’s a bleak, confusing, treacherous yet utterly beautiful experience. Which is something I think that comes through in my work, maybe. I definitely use art to help make sense of some of it.

Anyway, generally speaking it’s an extremely rewarding and gratifying pursuit, one which enables you to share a part of yourself with the world and the response has been extremely humbling. The kind things people say make such a big difference. Because of the exposure that Tumblr has given my work, the realisation of the shear number of people who have seen my work, and the few who have enjoyed it, then the even smaller few who follow what I do, to the tiny minority who are really affected by it. I think any artist gets a huge kick out of knowing that. It’s completely crazy to be able to do that.

What have you learnt from making art?

It’s also the first time I’ve wanted something badly. I really want to create beautiful and interesting things, and I want to succeed in achieving the ambitions I have set out for myself. That involves pressure and hope and patience and set backs and aspirational realism (which can be bleak), and that can make you feel quite vulnerable, but it also means I’ve learnt what it’s like to experience those things, and what it is to care about your work and to be proud of what you put out to the world. That was never a concern for me during my formative years. It’s taught me to care more.

The other thing, and it’s something I’ve always been pretty good at anyway, is to just be yourself and trust who you are and what you do and see value in it. Perfection is unattainable. Uniqueness should be revelled in. Your flaws give you character, and character is good. I’ve also learnt to limit this kind of rhetoric to the occasional written interview as to avoid everybody you know realising that you definitely are a completely self-centred pretentious dick!

Do you have a favourite piece from what you've created?

There’s a few that come to mind. I tend to favour my most recent work which is probably a good thing. There’s a piece in particular that I have on my wall that is probably the best thing I’ve ever made. It’s not online like a lot of my work and the piece was only exhibited for a couple of weeks in London. I never managed to come up with a name for it and I’m not going to show it to you so you’ll just have to take my word for it. It’s really nice! It’s actually going to be used as part of the artwork for an LP design I am working on for Ninja Tune records - which I am very excited about - so you might get to see it someday soon. 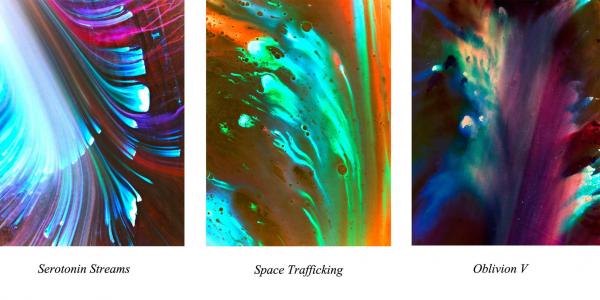 You've done some cover artwork in the past, who would you like to create cover art for in the future?

There are too many people to name because I love music more than everything else that goes on around me, but I guess there’s some artists who I really love and feel like my work would lend itself well to their sound. Julianna Barwick would be one. Her last record was so beautiful. 65daysofstatic, Joanna Newsom, Petar Dundov, Four Tet, Mark McGuire, Grimes, William Tyler, Holy Other, Balam Acab, fuck, literally anybody on Tri-Angle Records, Dead Oceans, Warp. I’d LOVE to do something for Erased Tapes - I think they have a very unique approach to the visual aspect of music art. I just want to work on as many cool projects as I can before I die! It’s where I want my art to exist.

You're a self-confessed music lover, so how does music play a role in your creative process?

Music is so magical, it has this emotive power that other art forms can’t quite reach in my opinion. One brief moment of a song can change your entire mental state. It just inspires me to live. I barely go an hour in a day without listening to music. The idea of working in silence does not appeal to me at all, the idea of living without music seems pretty awful. I think music helps to focus my brain, I tend to be a bit overactive. If my mind was a TV set then I would probably have about 5 or 6 channels. There has to be something on air pretty much all the time on all of these - music or sound can takeover a whole station without my input. That enables me to focus on something else. I don’t know, that probably sounds crazy - I just love music.

Do you have a clear vision of how you want your work to turn out or is it more of an unplanned process?

Occasionally yes. I think a lot of cool art comes out of happy coincidences and mistakes and randomness. I think a good way to sum up the way I work is that favourite piece I mentioned earlier, the other day I finally worked out the genesis of the artwork but couldn’t remember at all how I ended up making it. I’m not somebody who can imagine this great piece of work and bring it to life, I tend to create the right circumstances for interesting things to occur and roll with it until there’s something good at the end.

What are you plans, art wise, for the future?

Divide and conquer. Keep making things. Keep moving forward… and one day have my own record label!

You can find more of Hardwicke's work here. 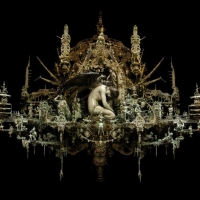 Framed: Kris KuksiMeticulously crafted sculptures that will make you see. 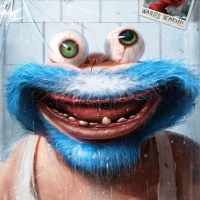 Introducing the graphic designer and illustrator known as Bkopf.

We love this incarnation of Studio Ghibli.