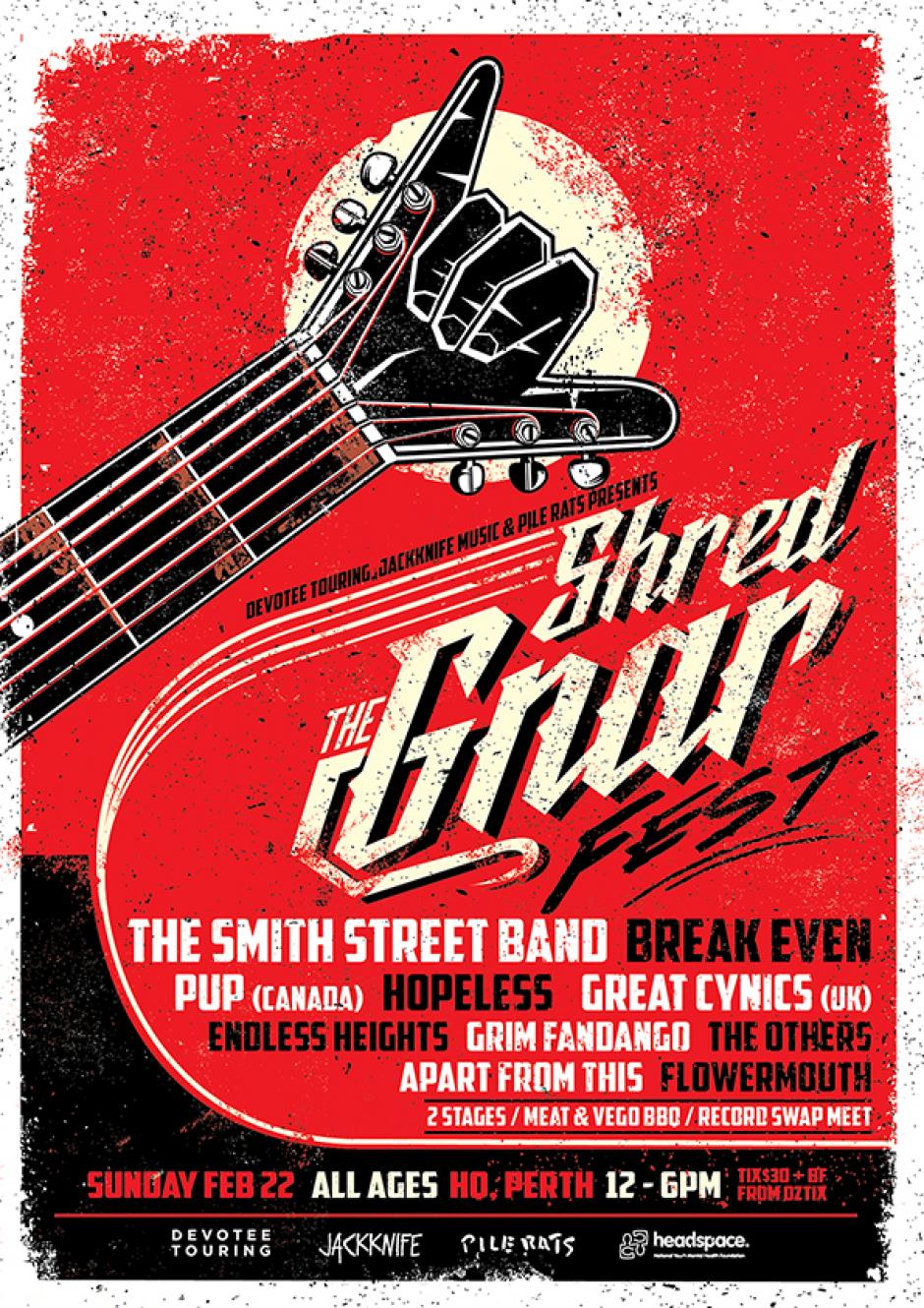 People like to grumble that Perth never gets anything worthwhile but we're stoked to announce that we're giving a helping hand to one of 2015's best all age festivals, Shred The Gnar. Bringing over ten bands for a two-stager so you barely miss anything at the YMCA HQ Skatepark. And with headliners The Smith Street Band and Break Even coming along it's bound to get you excited and that's before the other 8 bands are even mentioned! We've put together a bit of a rundown on all the bands so you can get acquainted with them all.. expect more from us on this fest over the next couple of months!

Barely resting since having spent November touring the country to promote the album, which sold out shows in every city including three sold out Corner Hotel shows in their hometown of Melbourne, The Smith Street Bandannounce their first tour of 2015. In what has been a stellar year for the group, in which Throw Me In The River has received universal praise, been crowned triple j’s album of the week and debuted in the top 20 of the ARIA chats, 2015 will be much of the same for the band, already filling their calendar with national and internationaltour dates, including a second appearance at Belgium’s Groezrock Festival.

Having left a legacy in the punk and hardcore communities across Australia and around the world back when they disbanded back in in 2012, Break Even have re-grouped and returned with their new song “Young & Bright” while gearing up to get out on the I’d Rather Be Giggin’ Tour 2015. Break Even’s honest and heartfelt approach to songwriting left a lasting impression on the hardcore community, and “Young & Bright” speaks as not only a fond memory to these years, but a celebration of what’s to come.

As of late, Toronto, Canada has been the breeding grounds for some of the best punk rock bands around. What sets PUP apart in this booming scene is their ability to fuse raw punk energy with catchy earworms, big hooks, and scream-along choruses. Their songs are loud and fast, equal parts unchecked energy and calculated arrangements, with hair-pin turns, raging guitar riffs, and an overload of gang vocals. Live, the band brings it full-throttled, every single show. They’ve gained a reputation for their sweaty, raucous, no-holds-barred live set. They play
loud. Like really fucking loud. And every time they get on stage, you can be certain they’re gonna play their guts out – house party, dive bar, festival stage, it doesn’t matter. PUP is more than just another loud Toronto rock band. Go hear it/see it for yourself.

After keeping quiet for the past few years, the founding members of Hopeless are together again and eager to share their reflective and naïvely optimistic brand of melodic hardcore for one final tour.
Starting out in late 2007, five friends made a name for themselves through hard work on the touring circuit in Australia and abroad, writing well-received releases and being respected as a band that took nothing for granted. Hopeless have decided to go out just as they started, together, and with a bang.

Great Cynics are three unreliable people from Devon, UK who like hanging out in cars and listening to The Lemonheads. They've got two albums out, 'Don't Need Much' on Household Name Records and 'Like I Belong' on Bomber Music and a third album ready in time for their first Australian Tour. What started off as a solo project for Giles Bidder now sees Great Cynics playing Reading & Leeds Festival in the UK, Touring with the likes of Against Me!, Joyce Manor & Cheap Girls and slots at Fest 9, 11 & 12.

Endless Heights are five friends with a passion for music and adventure alike. They have established themselves as one of Australia’s most hard-working bands, having toured Australia with music names of Basement (UK), Northlane, Trophy Eyes, Superhaven (USA) and In Hearts Awake amongst others. Endless Heights pride themselves on a DIY vision and an honest aesthetic, and the band continues to grow, and grow, while making as many memories as they can along the way.

Off kilter Perth pop-punk band Grim Fandango, started 2014 off touring Australia with The Smith Street Band & The Menzingers, then followed it up releasing a song online every Month of the year. They are currently working on the follow up to 2013's “Flicker Noise”, released through Poison City Records.

The Others combine fast frantic hardcore with that traditional Perth groove and are one of the most exciting new bands coming out of the area. Having Just released their 7" "Rain Dance"  and currently mid way through their Australian Rain Dance Release tour, 2015 is set to be a big year for the band.

Apart From This are a band that was formed in 2010 and are inspired by a wide variety of music ranging from The Beatles to Sabbath to Smashing Pumpkins. Since being signed to Poison City records in early 2013 the band released their debut album 'In Gloom'. 2014 saw them release their brand new 7" 'Spinning' which reveals a band who have truly found their feet, further expanding on the blend of gritty, dynamic post-hardcore and guitar driven 90's rock.

Four Perth locals dedicated to make their stamp with their Punk-Rock,90s Grunge laced tunes. Flowermouth are new pretty to the Perth scene, but have already picked up supports with the likes of The Story So Far, Violent Soho, The Smith Street Band, La Dispute, Joyce Manor & Luca Brasi. They've recently released their “Nostalgia” EP through Perths Hindsight Records.

Shred The Gnar kicks off on February 22nd at the YMCA HQ Skatepark, between 12pm-6pm, tickets are cheap as and are on sale through Oztix HERE now! 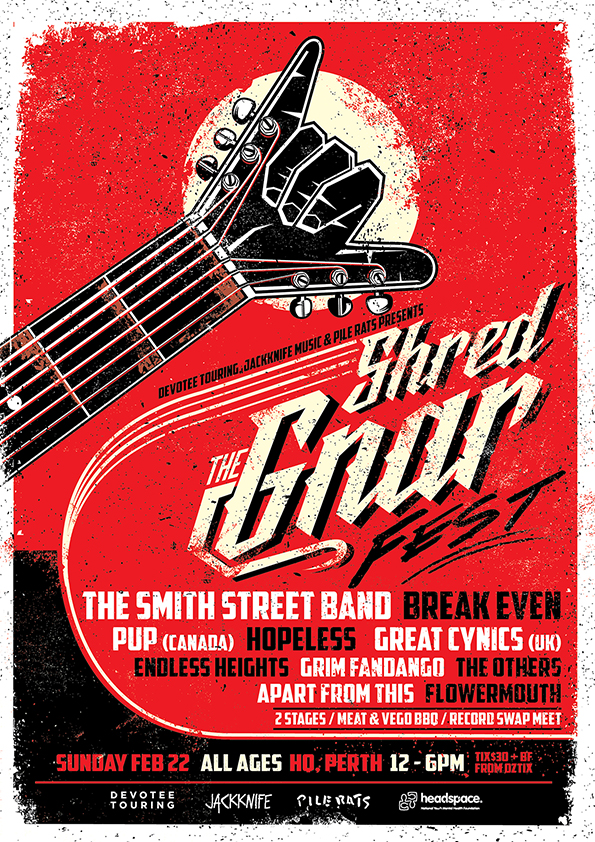 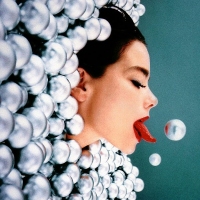 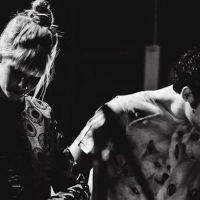