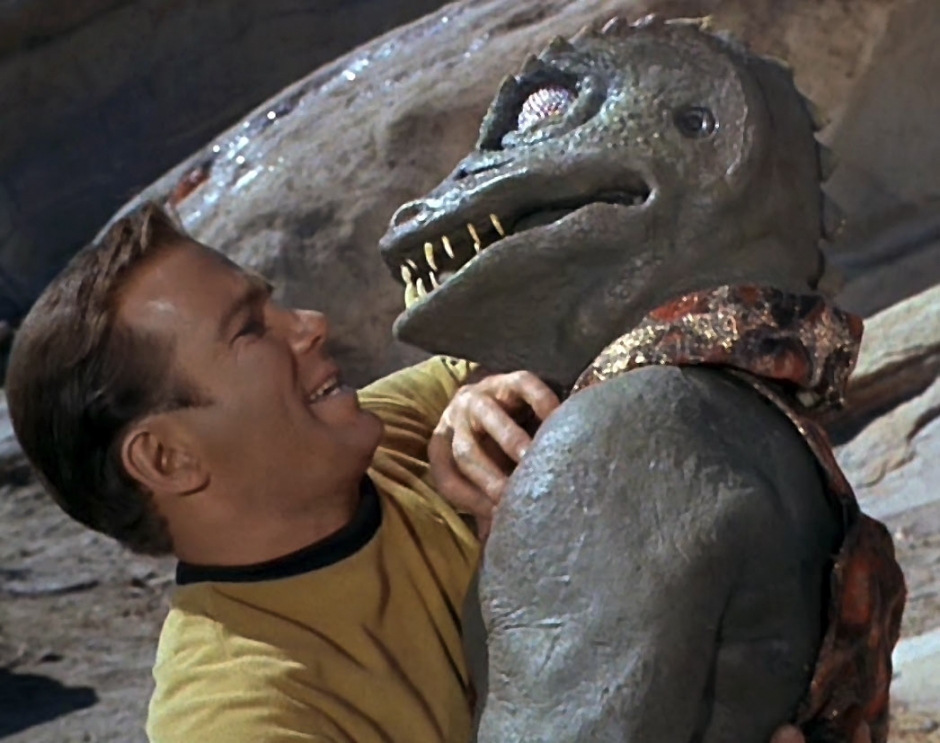 They are among us. Blood-drinking, flesh-eating, shape-shifting extraterrestrial reptilian humanoids with only one objective in their cold-blooded little heads: to enslave the human race. They are our leaders, our corporate executives, our beloved Oscar-winning actors and Grammy-winning singers, and they're responsible for the Holocaust, the Oklahoma City bombings and the 9/11 attacks. This is one of our favourite conspiracies championed by on one of our favourite conspiracy theorists, David Icke. We’re talking of course about the Reptilian Overlords that have been controlling the human race since ancient times.

The theory involves a race of extraterrestrials from the star Alpha Draconis in the Draco constellation. Unlike humans, the Reptilians are a group of beings who are very unemotional while also being very logical and hierarchical. They are said to be behind secret societies like the Freemasons and the Illuminati and have the Queen, Bill Clinton, the Bush family, Barack Obama, John Kerry, Brad Pitt, Madonna, Marilyn Monroe, and Tom Hanks amongst their ranks. In fact all members of the royal family are nothing but shape-shifting reptiles with crowns. Although not all Reptilians shape-shift and there are different types of depending on where they sit in the hierarchy. The majority of Reptilians operate on a hive-mind where there is very little individuality and freedom and there is much more structure and control by their masters at the top. 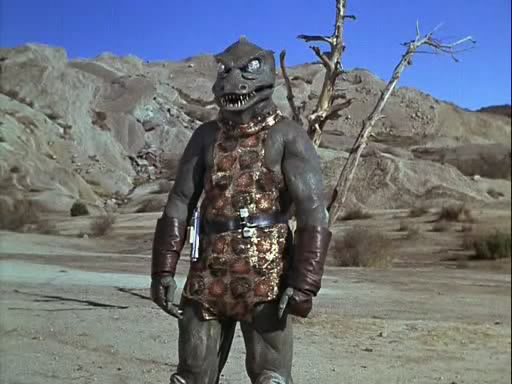 Icke argues that humanity was created by a network of secret societies run by an ancient race of interbreeding bloodlines from the Middle and Near East, originally extraterrestrial. Icke calls them the "Babylonian Brotherhood". The Brotherhood is mostly male. Their children are raised from an early age to understand the mission; those who fail to understand it are pushed aside. The spread of the reptilian bloodline extends to 43 American presidents, three British and two Canadian prime ministers, various Sumerian kings and Egyptian pharaohs, and a small number of celebrities. Key Brotherhood bloodlines are the Rockefellers, the Rothschilds, various European royal and aristocratic families, the establishment families of the Eastern United States, and the British House of Windsor. Icke identified the Queen Mother in 2001 as being "seriously reptilian".

The Illuminati, Round Table, Council on Foreign Relations, Chatham House, the Trilateral Commission, the Bilderberg Group, the International Monetary Fund and the United Nations, are all Brotherhood created and controlled, as are the media, military, CIA, Mossad, science, religion and the Internet, with witting or unwitting support from the London School of Economics. At the top of the Brotherhood stands the "Global Elite", identified throughout history as the Illuminati, and at the top of the Global Elite stand the "Prison Wardens". The goal of the Brotherhood – their "Great Work of Ages" – is world domination and a micro-chipped population. 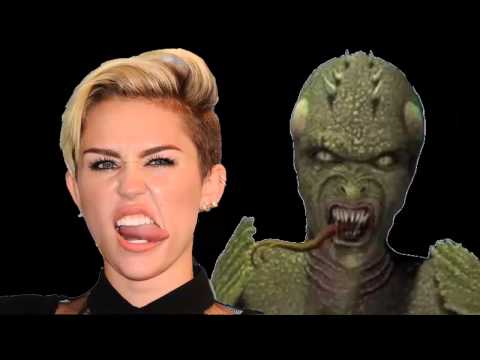 The theory suggest that the Reptilians had come to Earth for its precious metals. They came specifically for "monatomic gold," a mineral he says can increase the carrying capacity of the nervous system ten thousandfold. After ingesting it, the reptilians can process vast amounts of information, speed up trans-dimensional travel, and shapeshift from reptilian to human form. They use human fear, guilt, and aggression as energy. "Thus we have the encouragement of wars," Icke wrote in 1999, "human genocide, the mass slaughter of animals, sexual perversions which create highly charged negative energy."

Icke writes that the Reptiles have crossbred with human beings, the breeding lines chosen for political reasons, arguing that they are the Watchers, the fallen angels, or "Grigori", who mated with human women in the Biblical apocrypha. Their first reptilian-human hybrid, possibly Adam, was created 200,000–300,000 years ago. There was a second breeding program 30,000 years ago, and a third 7,000 years ago. It is the half-bloods of the third breeding programme who today control the world, more Anunnaki than human, he says. They have a powerful, hypnotic stare, the origin of the phrase to "give someone the evil eye," and their hybrid DNA allows them to shapeshift when they consume human blood. He added that they have bred with another extraterrestrial race called the "Nordics", who had blonde hair and blue eyes, to produce a race of human slave masters, the Aryans. The Aryans retain many reptilian traits, including cold-blooded attitudes, a desire for top-down control, and an obsession with ritual, lending them a tendency toward fascism, rationalism and racism. 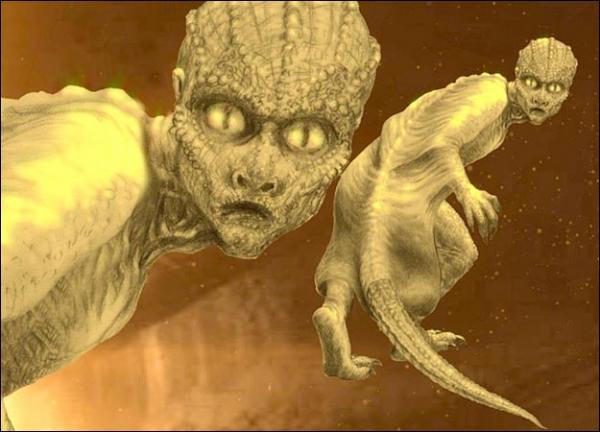 The reptilians not only come from another planet, but are also from another dimension, the lower level of the Fourth Dimension, the one nearest the physical world. Icke writes that the Universe consists of an infinite number of frequencies or dimensions that share the same space, just like television and radio frequencies. Some people can tune their consciousness to other wavelengths, which is what psychic power consists of, and it is from one of these other dimensions that the Anunnaki are controlling this world – although just as fourth-dimensional reptilians control us, they are controlled in turn by a fifth dimension. The lower level of the fourth dimension is what others call the "lower astral dimension". Icke argued that it is where demons live, the entities Satanists summon during their rituals. They are, in fact, summoning the reptilians.

Most organised religions, especially Judaism, Christianity and Islam, are Illuminati creations designed to divide and conquer the human race through endless conflicts, as are racial, ethnic and sexual divisions. He cites the Oklahoma City bombing and 9/11 as examples of events organised by the Global Elite. The incidents allow the Elite to respond in whatever way they intended to act in the first place, a concept Icke calls "order out of chaos", or "problem-reaction-solution". He writes that there are few, if any, public events that are not engineered, or at least used, by the Brotherhood:

"You want to introduce something you know the people won't like, you first create a problem, a rising crime rate, more violence, a terrorist threat, you make sure someone else is blamed for this problem. You create a "patsy", as they call them in America, a Timothy McVeigh or a Lee Harvey Oswald. This brings us to stage two, the reaction from the people – "This can't go on; what are they going to do about it?" This allows them to then openly offer the solution to the problems they have created"

That last bit is something we can get on board with, the rest we will leave up to you to decide… 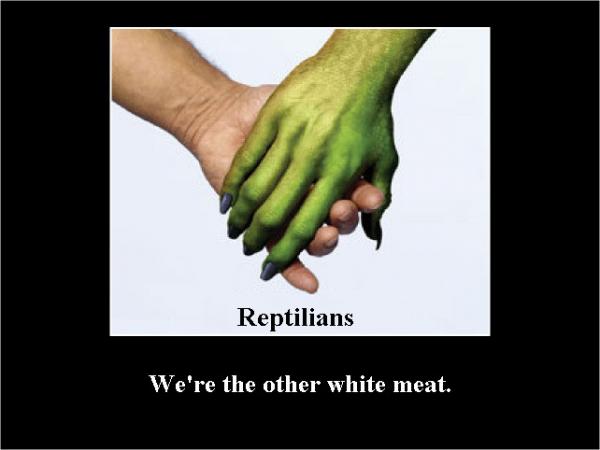 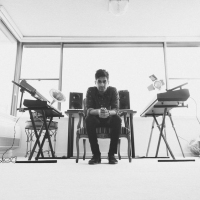 Sid Pattni ft. Meg Mac - Go Back HomePerth's Sid Pattni has got a new one out on Pilerats Records 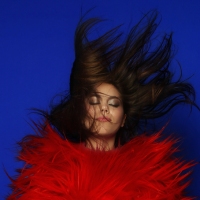