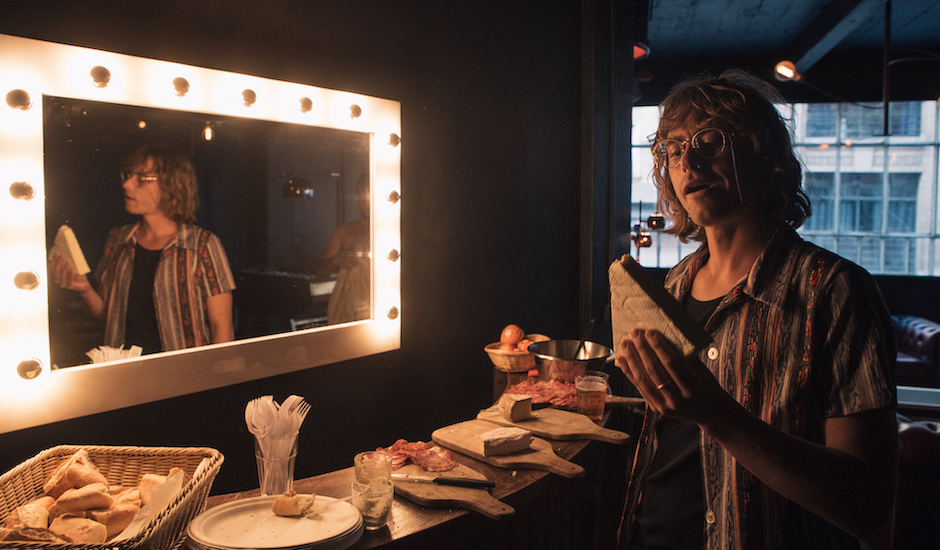 It's hard to deny that Lime Cordiale are amongst Australia's adored acts of the moment (and likely, considering their current trajectory, acts of tomorrow). While their debut album Permanent Vacation was a masterclass introduction to the group and how they've grown since releasing their first work at the start of this decade, the two years since has been plagued by singles both addictive and slick; this year's triple-threat three-peat of Money, Inappropriate Behaviour and Robbery transforming the group into one of the country's essential names in indie-rock.

As a result of their endless craft and ability to seemingly pluck out the best of Australian indie-pop-rock, Lime Cordiale have grown, and grown, and grown. Not content with playing some of the country's biggest festivals and even creating their own (THE SQUEEZE, a mini-festival in which the group hand-pick a selection of Australian acts, sold out for its second consecutive year), they're doing sold-out runs of shows left-right-and-centre, and evening signing management deals with Post Malone, who with his award-winning manager Dre London, is taking the reigns alongside their long-time Chugg Music home.

Now, they're setting their sights internationally. After their Post Malone news captured the band a fair chunk of attention in international markets, they recently set out for a headline tour across the UK and Europe in yet another move of band's finding it big overseas, something they're no-doubt bound to continue as they grow exponentially.

Here, armed with photos by Jack Shepherd and arriving in the midst of a national tour that's surely their biggest yet, Lime Cordiale take us behind-the-scenes of their international touring, taking us to Europe and back as they detail the food riders and club bunkers they came to love over the time away. Check it all out below, alongside the remaining tour dates: 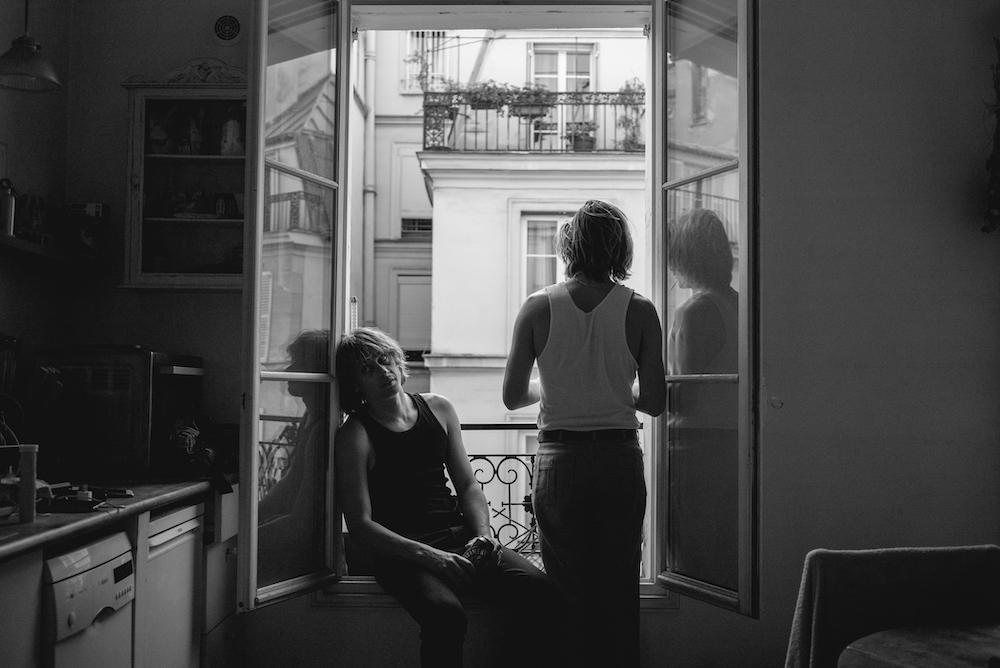 Paris, France. A mate of ours from the Northern Beaches moved to Paris a while ago and is now doing well as a fashion photographer. He was out of town and we were able to stay a couple of nights in his beautiful Parisian apartment. We had one day off in Paris. We rolled around on Lime scooters and filmed parts of the Robbery music video near the Eiffel Tower. 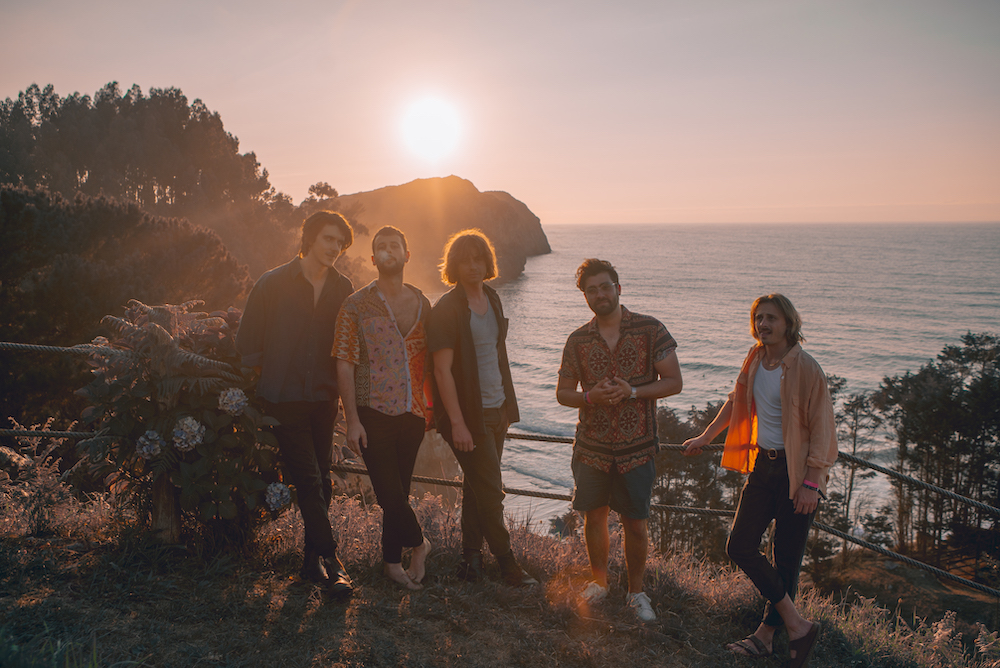 Llanes, Spain. This was about two weeks into the tour and where Jack met up with us. So it's where the first good photos started. We'd already toured all through Austria, Germany and Switzerland so it was great to finally be by the ocean. This photo was taken at the festival site of Enter The Wave, a small festival run by a Dutch university... kind of a weird scenario. After practising our Spanish, we were suddenly surrounded by Dutch. We played twice at this festival, they lent us surfboards and we were able to chill for a moment before getting back in the van. 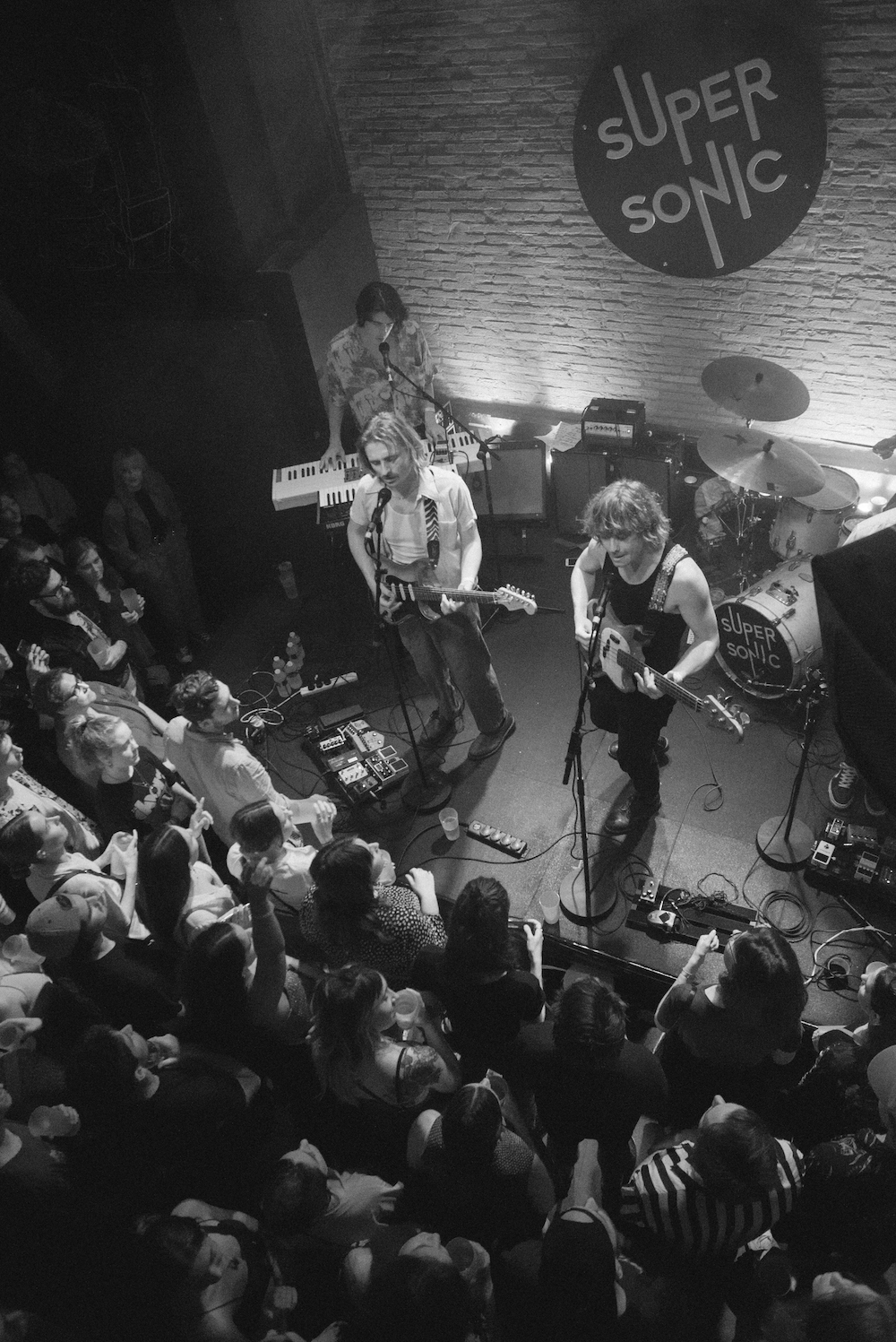 Paris, France. Jack took this photo from the top viewing platform that looked down on to the stage. I was a bit intimidated to play certain cities in Europe; Paris, Berlin, London, Amsterdam. A lot of good music comes through and out of these places but once you're there you realise that everyone's just incredibly enthusiastic. Nightlife in Europe is amazing. The young and the old eat and stay out late and don't feel guilty about it. It didn't feel like anyone was out to get incredibly smashed. They're just out to experience what the evening has to offer. 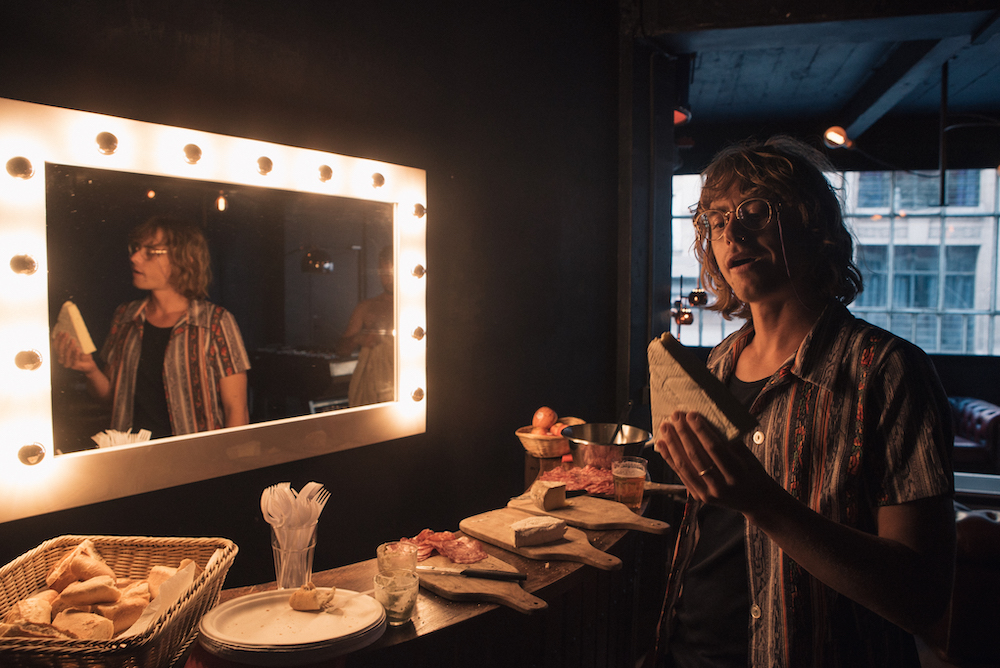 Paris, France. One of the best things about touring through Europe is the food rider. Here's Louis holding a small portion of cheese in front of a table of food. The best food riders were in Germany and Switzerland. You'd arrive and three people would be there helping you unload the van. Then there'd be a full fridge full of beer and a table 3 times bigger than this one filled with all kinds of food. They really know how to keep you coming back. 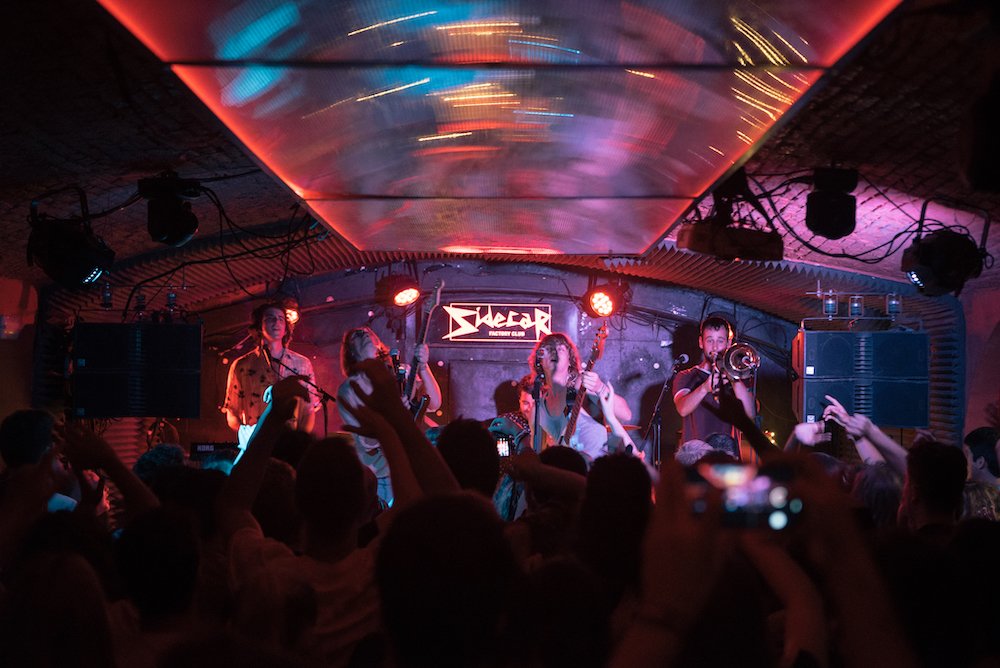 Barcelona, Spain. We played a lot of rooms of this size. Sidecar in Barcelona holds about 150 people. Our biggest headline stages on this tour held 250. In Europe, they call these rooms "clubs". It's quite unusual to play clubs throughout Summer. Most bands are off playing festivals but it was a good sign that we could fill these rooms out of season. It's not surprising that clubs are more popular in Winter. Most of them are underground and resemble bunkers or cellars. They get stinking hot. The grungy green room from the last photo is directly behind this stage, through the door behind James on drums. 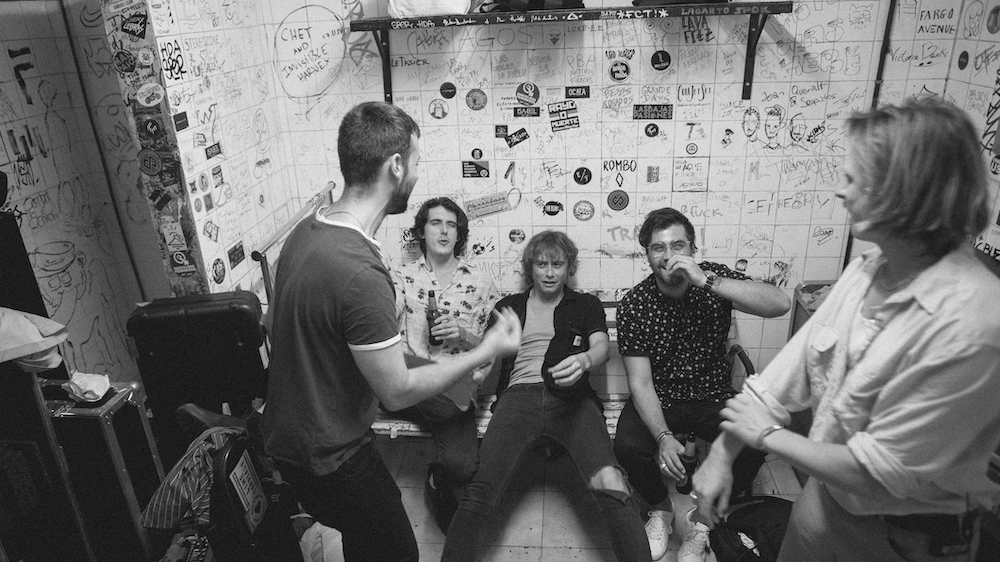 Barcelona, Spain. We did a lot of driving. Often after a 4-8 hour drive, you get stuck at the venue from the early afternoon until the early morning. Sometimes it's hard to keep morale high but our trombone player Nick is pretty exceptional at it. Here he is giving us one of his famous psych-up pep talks in a grungy green room behind the stage. Occasionally, we'd get in a shitty mood but once we were all playing music together, you can't help but smile. 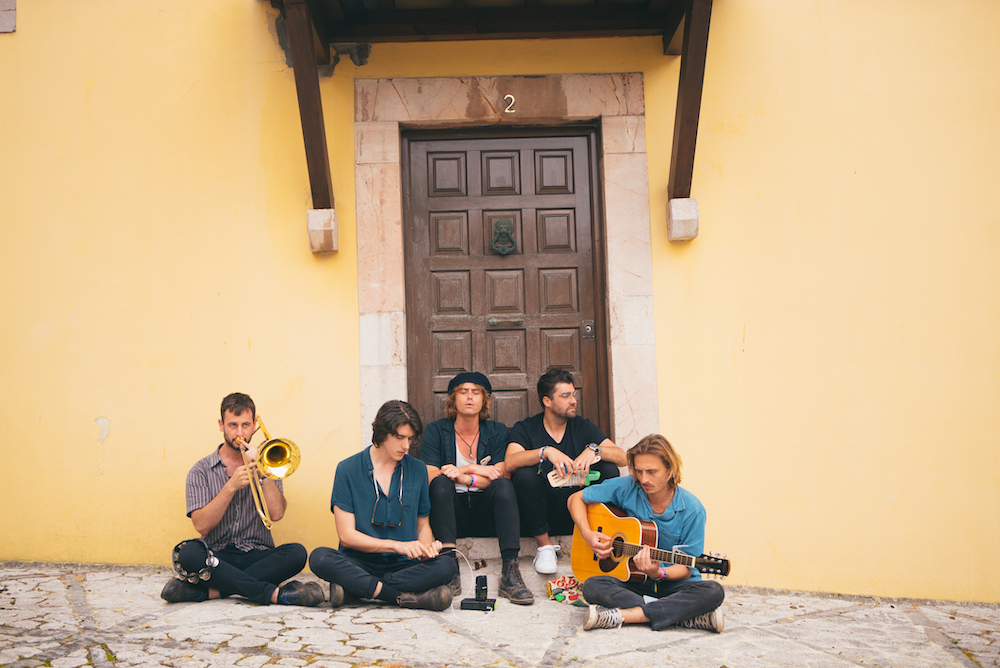 Llanes, Spain. During the day we'd escape the Dutch festival to explore the small Spanish town of Llanes. It was stunning. Old and traditional, music everywhere, people pouring cider in the streets. It had everything. Jack was very proactive with his camera. He made us grab an acoustic guitar and hit the streets for an impromptu filmed performance. We didn't end up using this performance but went with another take of us walking through the small streets. The audio was recorded with four or five iPhones and you can watch it on our YouTube channel. 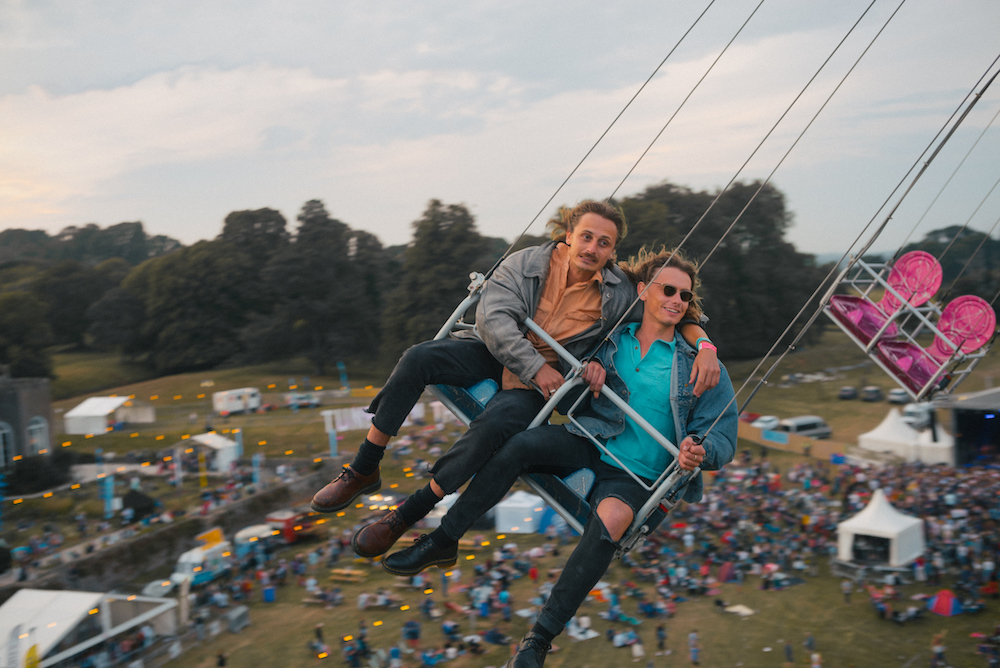 Exeter, England. This was a festival we played at an Earl's castle in Exeter. You can see the festival stage on the right and a bit of the castle on the left. A relative of the Earl invited Louis into the castle but as they turned a corner she disappeared and Louis was left wondering about (a little bit pissed), trying to find an exit. 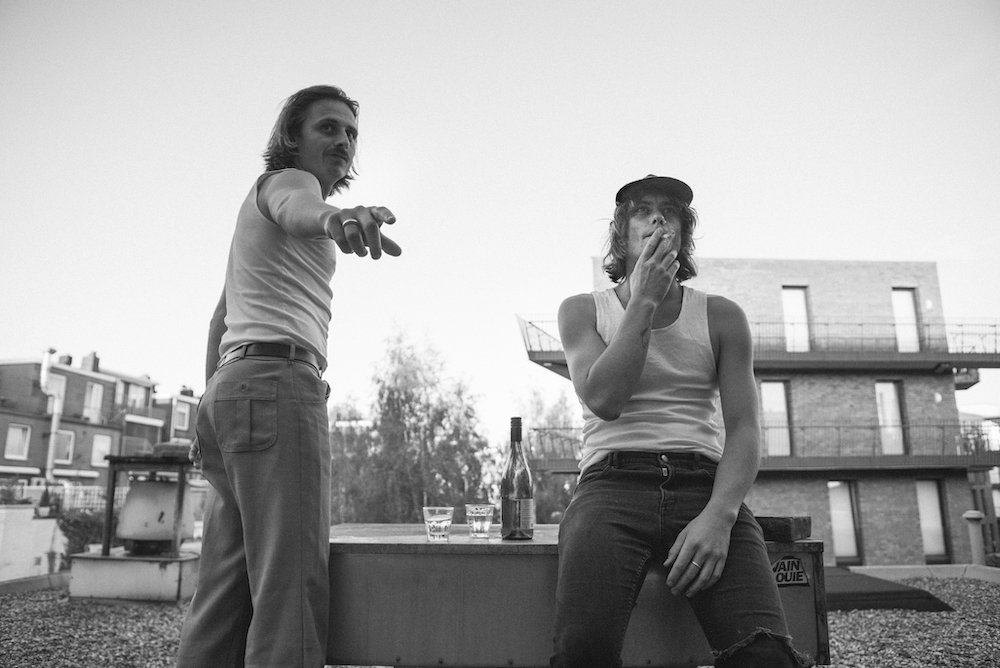 Nijmegen, Netherlands - The 4th last show of a 30 date tour. We played Nijmegen on the night before our biggest show in Amsterdam. This rooftop joined on to the green room. You can see we're drinking white wine. We'd consumed so much beer and knew that the bellies were going to start to show if we didn't act fast. But to be honest, even though we'd have a couple of beers every day, I'm proud to say that we were pretty damn sensible. There are too many early mornings to get sloshed every night. You just start to feel it after a while. Playing 30 shows is hard on the vocal chords and if Louis or I lost our voice, the show just wouldn't be the same. But then again, let's be real... we definitely had some cracker nights. 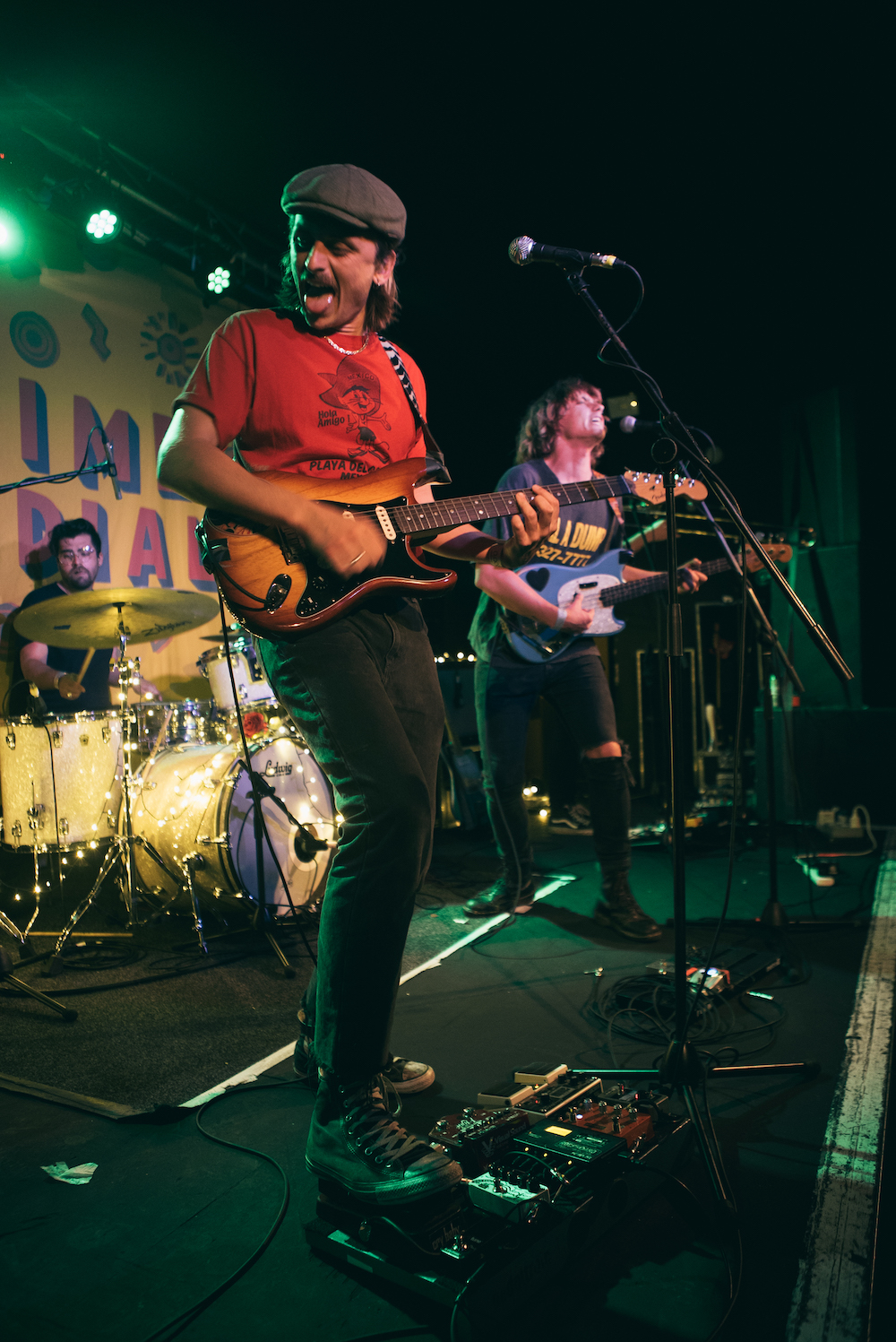 Birmingham, England. It's hard to avoid adapting to the culture of whatever city you're in. Here's me wearing a Peaky Blinders style hat in Birmingham. I suddenly got self-conscious on stage and had to ask the audience whether they approved. Luckily they did... at least they said they did. I thought it might be like an Englishman in Australia jumping on stage in a brimmed hat with corks swinging from all sides 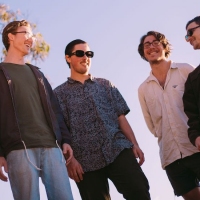 Premiere: Liquid Time introduce themselves with their debut EP, LivingThe four-track release from the Sydney indie-rock group sees them introduce their many sounds and look forward into the future. 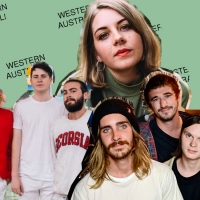