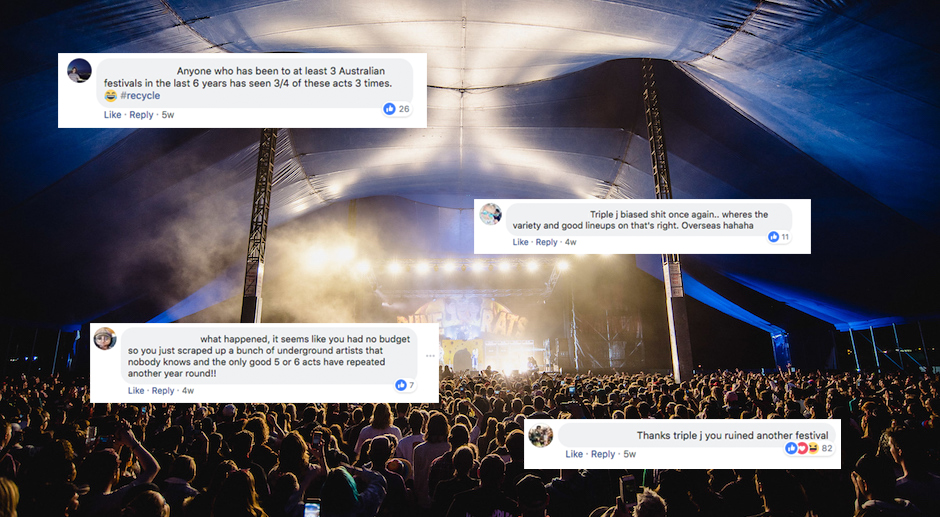 Check the Facebook comments of almost any Australian music festival to have released their lineup this year and there’s a high chance you'll be met by the same remarks. "Anyone who has been to at least three Australian festivals in the last six years has seen 3/4 of these acts three times #recycled," says one comment on a festival's 2018 lineup announcement. "Ah, triple j's shit bias once again, where’s the variety these days?" reads another. Even festivals regarded for their often niche and genre-specific lineups have been dragged through the mud for booking lineups deemed too "recycled" and "same-same" this festival season; no event is off-limits.

The problem (depending who you talk to anyway) is that the influence of triple j has become too strong on our festival market, as the acts repeating on our festival billings are often the same being put on heavy rotation and endlessly promoted by the radio station. In a sense, this is true. The radio station is involved with many of Australia’s major music festivals, whether they’re ‘presenting’ the festival or merely a media partner – which is mostly the case. However, in the majority of these cases, triple j aren’t the ones booking the acts and as it turns out, there’s actually not much cross-over between triple j’s most-played artists of 2018 thus far and the acts appearing on our festival lineups the most.

At the start of June, triple j announced their 50 most-played acts of the year thus far, led by Hockey Dad, Ocean Alley, The Wombats, Camp Cope and Middle Kids. While many of these acts are playing a handful of festivals this year, there’s also a significant number absent. Superorganism, Alison Wonderland, Drake, Wolf Alice, Tonight Alive, BØRNS, BROCKHAMPTON and Lorde all sit within the radio station’s 30 most played acts of 2018, and many of them, if they’re playing Australian festival slots in 2018/2019, are only playing one – hardly an ‘over-saturation’.

Likewise, ranking which acts appear on our festival lineups the most this festival season gives a similar outcome. Collating and comparing the first announcements of 25 major Australian festivals finds that Mallrat and Winston Surfshirt are this year’s most prominent festival arts, playing six of these festivals each. Following them, on five appearances each, are acts ranging from SAFIA and Vera Blue to Rolling Blackouts Coastal Fever and The Jungle Giants. Of the 11 acts playing at least five of Australia’s major music festivals this year, only two make it in triple j’s most-played list – Mallrat at 48 and Rolling Blackouts Coastal Fever at 31. 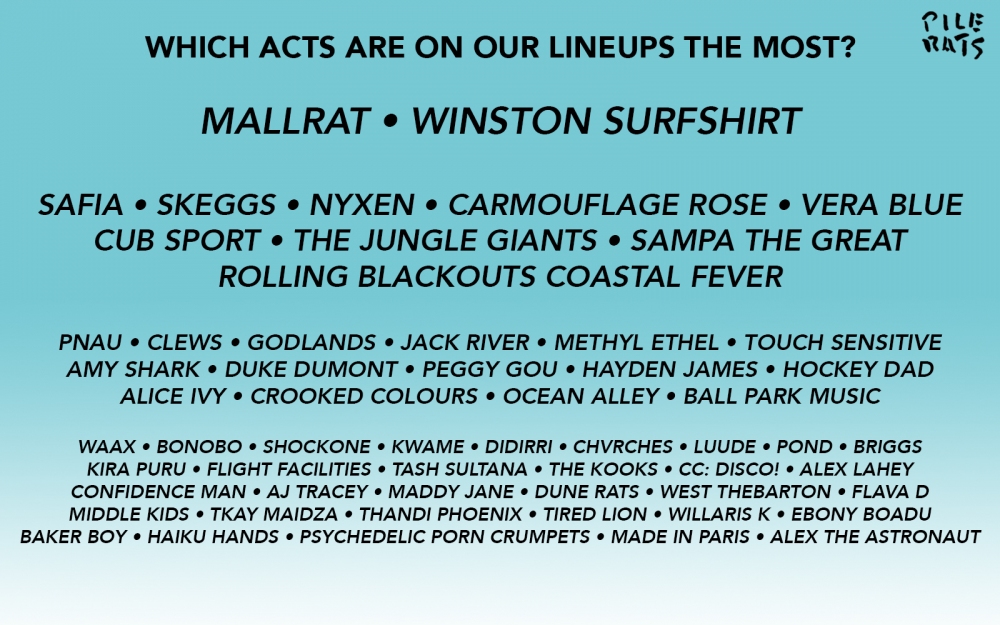 From Mallrat to Alex The Astronaut, these artists are playing Australian festivals more than any others this year.

The problem isn’t that triple j are dictating festival lineups or using their position to influence promoters. Instead, they’re merely playing what’s popular – who we’re talking about online, who we’re texting in, who we’re streaming, downloading or buying. Festival promoters are doing the same. Sure, radio play factors into who promoters book, but only because radio stations often play what’s popular – which is why triple j’s musical taste has seemingly become more ‘commercial-sounding’ over the last ten years, they're just the more popular acts at the moment.

Additionally, there are plenty of festivals remaining in 2018 which cater to alternate audiences – something I’ll get into in more detail shortly – but when their ticket sales and profit margins decline and waste away, you can’t blame them for booking who’s popular. Look at Perth’s ORIGIN NYE, for example. Typically, this event is a west-coast haven for bass music and, especially in recent years, hip-hop. However, after last year’s pre-event ticket sales failed to sell-out and its director, Saran Bajaj, admitting that “it can be hard to keep those special qualities that you loved about the [ORIGIN] experience” when the festival continues to grow, the festival diversified – adding a handful of indie acts such as The Kooks, Rolling Blackouts Coastal Fever and Tash Sultana to their line-up in addition to the more hip-hop and bass-centric acts that always dominate its lineup.

So, to answering the question we asked in this article’s title – are all our festival lineups the same? Well, not really.

By collating the lineups of these 25 Australian festival lineups, we’re able to determine which ones are the most unique – as in hold the greatest number of acts appearing exclusively to that festival and none others in 2018/2019. Cross-checking each of these lineups with their counterparts actually finds some pretty interesting results.

In unexpected news, genre-specific festivals hold the greatest amount of nicheness, as the genres their lineups represent don’t often appear at any other festivals. This is why you’ll find festivals such as Frontier’s RNB Fridays Live and Byron Bay’s controversial Bluesfest having lineups 100% exclusive to them. Additionally, two of this year’s heavier festivals – UNIFY Gathering and Good Things – have little cross-over with other festivals, as the amount of metal, hard-rock and punk in our commercial music scenes are extremely limited to a selected few.

Contrarily, festivals that cater to boarder audiences with diverse lineups have more cross-over with each other. There are exemptions to this however, with festivals such as Meredith, FOMO, Listen Out and Laneway each hosting lineups that are at least 65% exclusive to them. Laneway Festival – who recently announced Courtney Barnett and Gang of Youths as their headliners – have become professionals at this, booking lineups that are popular (five of their artists in 2019 occupy the top 25 most-played artists on triple j so far this year, and singles by Ruby Fields, Rex Orange County and G Flip also appear in the station’s 50 most-played tracks) yet also unique to the festival.

That said, do you want to bet that Laneway Festival’s 2019 lineup announcement was plagued with comments about how similar it is to other lineups? Because it was – despite only five of their 28 billed artists playing more than one of our chosen 25 Australian festivals this year. 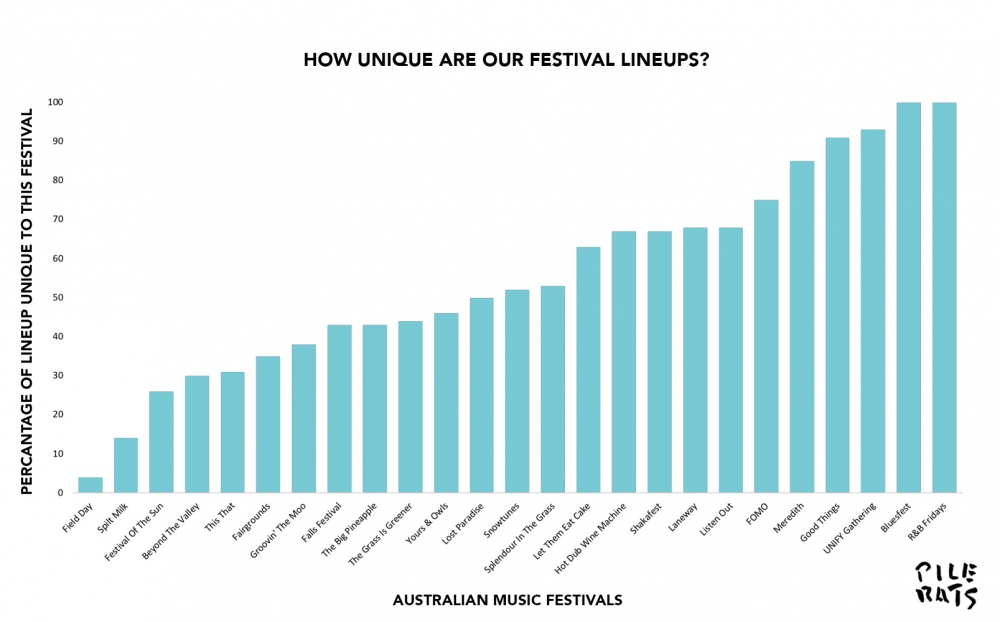 Australian music festivals, ranked in order of how unique their lineups are.

There are festivals on the other side of the spectrum, but usually, there’s a reason why. Field Day hosts one of this year’s most ‘common’ lineups with only one act – RÜFÜS DU SOL – playing exclusively at their event. However, some of the festival’s acts are unique to areas as wide as the whole east coast (Cardi B and Migos, two of the festival’s big drawcards, are only otherwise appearing at Perth’s ORIGIN Fields event) or unique to New South Wales.

Alternatively, many other festivals with comparatively low exclusivity rates are regional events, such as Spilt Milk, Festival of the Sun and the touring Falls Festival and Groovin’ The Moo circuits. While densely populated major cities attract the bulk of festivals and national tours, more sparsely populated centres such as Townsville, Canberra, Maitland and Bendigo don’t, suggesting that while you may have seen Ball Park Music or Vera Blue a hundred times, the target audience of Groovin’ The Moo haven’t. Furthermore, Groovin’ The Moo is an all-ages festival with a heavy emphasis on the under-18s crowd, providing this younger audience the chance to see acts they might’ve not seen at other festivals due to age restrictions.

There are reasons more complicated in nature too. One, for example, is the abysmally low Australian dollar, which means that many Australian festivals cannot afford to compete against their international opposition, who can easily out-bid Australian festival offers for international acts without breaking budgets. Also, a large proportion of these repeating festival acts are Australian, which potentially may have something to do with how strong our local scene is at the moment. Why pay out hundreds of thousands for a large-stage festival band when, for example, you can get it in Dave Le’aupepe for cheaper? Why pay thousands and thousands flying out mid-tier international artists and their crews while our own acts – Cub Sport, Rolling Blackouts Coastal Fever and Vera Blue – are some of the country’s most popular and are becoming internationally adored in their own right?

Are our festival lineups all the same in 2018/2019? Not really, but those that are typically have their reasons. Maybe you’re just a big ol’ bunch of whiney entitled babies spoilt for choice instead *shrugs* 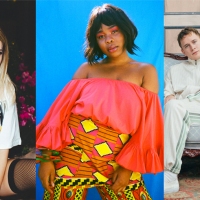 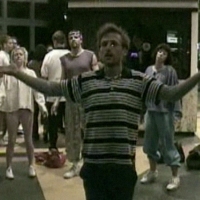 An Ode To The Greatness That Is Fatboy Slim's 'Praise You' Video ClipOne of the all time best, 20 years down the track.