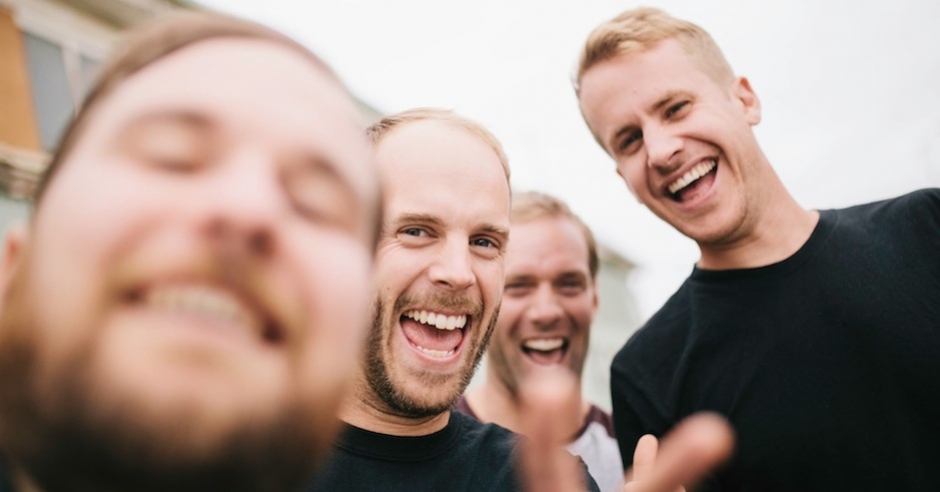 We find out why Australia is falling head over heels for these Tassie punks.

It took little more than an introduction from Luca Brasi frontman Tyler Richardson to work out that my chat with him was going to be one of the easiest, most chilled interviews I'd ever have the pleasure of conducting. "G'Day legend! How ya goin'?", he beamed down the line at me to kick things off, and immediately I could see why he and the rest of Luca Brasi have a rep for being some of the nicest dudes you could ever meet in the Australian music scene. Richardson and band mates Thomas Busby, Danny Flood and Patrick Marshall have been doing the rounds together since 2009, making their mark writing honest but upbeat melodic-punk, and the last month has been a whirlwind of epic proportions for these legends from the Apple Isle

In spite of how much it must help to be some of the loveliest dudes in punk, bands don't build a name for themselves by being nice guys alone. Luca Brasi have also earnt a reputation for being one of the hardest working bands in the country over the last several years, and they've been absolutely smashing it these past few weeks off the back of their super impressive third record If This Is All We're Going To Be. It was the feature album on triple j a short while back and also hit #18 on the ARIA Album Charts; an achievement Richardson admits the four-piece could've never seen coming six months ago.

If This Is All We're Going To Be is an album effortlessly overflowing with Aussie charm. It sees uptempo punk blended to perfection with playful hooks and melody, making it a record you can headbang to as hard as you like while still being able to sing every word loud as hell, which is a truly beautiful thing. The lyrics across If This Is All We're Going To Be implore us all to make the most of what we've got, when we've got it; a mantra that Richardson and Luca Brasi have been living off since they became a band seven years ago, and one that has never been more fitting for them than right now.

Have a read of our catch up with Tyler Richardson below and see for yourself why Luca Brasi are the new kings of Australian punk.

On their new record scoring the feature album on triple j and hitting #18 on the ARIA Album Charts:

We're totally blown away. It's absolutely fucking phenomenal. We never expected this to happen and it's pretty mad that it has.

On the writing and recording process of If This Is All We're Going To Be:

There's definitely a theme of 'giving everything you can' that ties heaps of the songs together. It kind of takes me to when people ask me: "What's this song about, and this song?" and then I start to realise that there actually are quite a lot of connecting themes in the songs. I don't particularly mean to do it, I guess it's just kinda how I end up writing lyrics. There are some songs on there that are mainly written by one person, like Pat, for example, will bring something to us and we'll go 'Look, this is nearly a complete song, let's see what we can do to it', but it was definitely the most collaborative effort he've had so far.

The recording process was pretty mega in the end. It was like, maybe 18 days, but all of us were still working and studying full time during the day, so we'd get in there about four o'clock in the arvo and punch out at about three in the morning most sessions, so it was fairly brutal. It's pretty gnarly, spirits can get pretty low at that time of the morning when you're like - 'This is my hundredth take, I just wanna go home. I've gotta go to school in two hours.' But it was good, it worked out. We had Jimmy Balderston, a producer out of Adelaide, he did a band called The Grenadiers and he's just a fucking gun. He's got such good energy and he's positive and he can kind of just pull you out of that funk when you need it.

On keeping busy and Luca Brasi's tag as one of the hardest working bands in the country:

We try not to take breaks. I mean, we had like two months off in the lead up to this record. We were actually really looking forward to the break, then like two weekends into it we were sending each other messages being like - 'Are you bored as fuck?'

I was actually thinking about it today, bands like Clowns and The Bennies, those guys honestly tour harder than anyone I know, those guys are out forever. But with those guys that's pretty much all they do. With us we're still working and studying full time and then trying to tour basically full time as well, so maybe that's where the hard working part of it comes from, trying to keep a real life is a fucking gnarly thing, too.

On keeping upbeat during the back end of a long tour:

There's always those mornings or afternoons where you're like - "Man, we've gotta be at sound check in like, half an hour", but as soon as it's half an hour out from when it's actually time to play, you just forget about every single thing that made you feel like shit in the first place and you've just gotta do it again. Even just thinking about it right now I'm stoked. I don't think it's lost on us yet and I really hope that it never is, because I'm excited thinking about playing a show just from talking about it and I'm not playing a show for a month. There have definitely been some hard moments but we're all really good mates in this band and we all look out for each other, so we're pretty lucky like that.

On the upcoming headline tour and how much it means to the band:

They're our biggest headline shows to date, which is phenomenal. We had one goal going into the pre-production for this record, it was - 'Let's headline The Corner', which was like a pipe dream, you know? And yeah, it's actually happening, which is fucking crazy and it's already sold a crazy amount of tickets in the few hours that they've been on sale this morning. I got a ticket report this afternoon and I was like, 'Whoa, holy shit, I did not expect it to be like that already.' So we're pretty stoked man, I can't tell you how happy we are with everything that's going on.

On Luca Brasi's recent appearance at a house show in Melbourne and whether it's something the band will continue to do:

It had been a long time since we'd played a house and we were kinda like - 'How is this gonna go down?', but it was still really private because she just invited all her mates and extended friends and that, so it wasn't as crazy as we were worried it'd be, but it was awesome. It was like going back in time.

That was always one of our favourite things in the world to do and getting the chance to go back to it; there's no pressure, there's no expectations. You're just hanging out with everyone and playing in their lounge room and trying not to smash your teeth out. 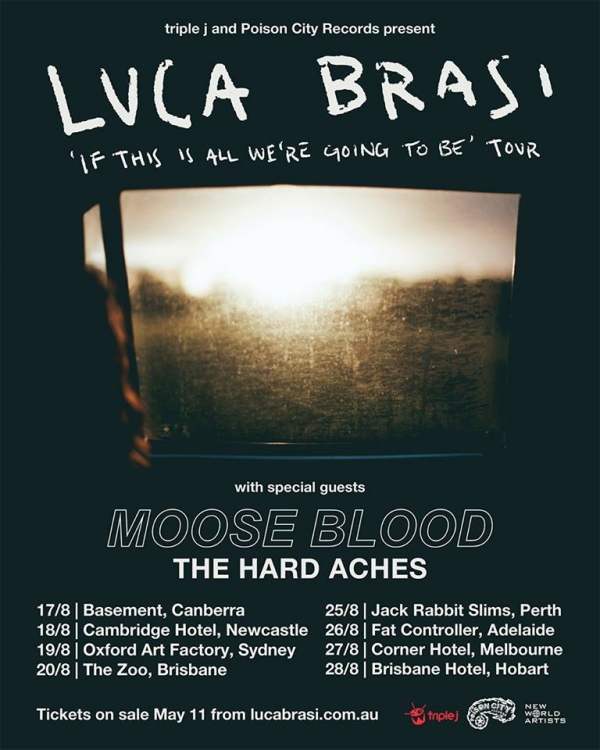 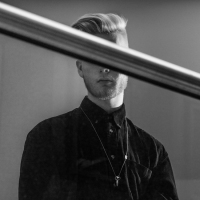 Mura Masa Is The FutureFalling in love with one of the world's most exciting electronic acts. 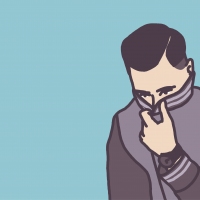 Ta-ku: Searching For Harmony In CreationA true jack of all trades in the creative world.