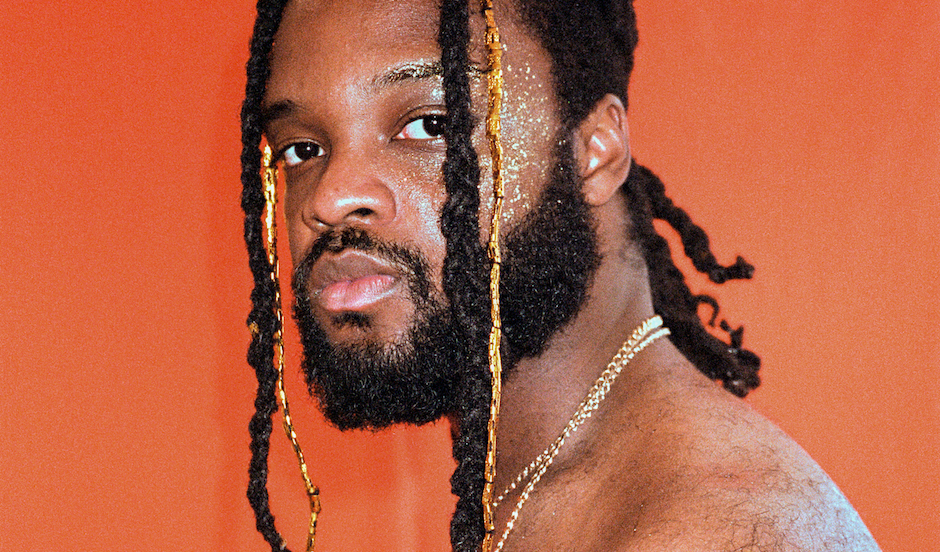 “Black dogs on the move!”: Genesis Owusu is making his statement

On his debut album Smiling With No Teeth, Genesis Owusu is showcasing his truest self - and making a marvel of doing so.

In the first minute of Smiling With No Teeth, Genesis Owusu shouts amongst a flurry of warped, Yeezus-esque experimentalism: “Black dogs on the move! / Black, feel the fur on the bruise!”. The song - the album-opening On the Move! - is rushing with alarming urgency, joined eventually by an almost-angelic vocal that contrasts the whiplashing pace of the single’s production: “I can feel it in my skin / I can feel my soul move / I can feel all of your sin / I can feel your fangs too / I don’t feel the light within / I’m the blackest dog too.”

On any other album bound to be released this year, On the Move! would be a glaring stand-out; a victorious expression of self that would undoubtedly be that album’s most courageous moment. On Smiling With No Teeth, however, it’s merely an introduction that doesn’t even go for two minutes; a song that creates a world that Genesis Owusu spends the next hour both reinforcing and pulling apart, through music that’s just as potent, powerful, and undeniably Genesis Owusu.

Born Kofi Owusu-Ansah in southern Ghana, Genesis Owusu has always thrived on self-expression. His family immigrated to Canberra a few years after his birth, a place where the only Black people he knew were those that he travelled to Australia alongside. Owusu and his brother Kojo - who raps under the pseudonym Citizen Kay - were sent to a Catholic School, where they were forced to either assimilate and fit in, or be themselves - the outcasts - in a superficially white and religious environment.

Genesis chose the latter, choosing to embrace his identity in a way that empowers his work years later. “I chose to wear the badge of the outcast like a badge of honour, which informed so many of my decisions,” he says over the phone from Sydney, finishing up a day full of album promo before catching the bus back to Canberra later that afternoon. “That moulded me into essentially who I am today; I want to diverge from everything because that felt like the easiest way to find out who I was, without people telling me who I am supposed to be.”

Growing up, Genesis seemed to live by the mantra of doing the opposite that people expected. He talks about fusing western ‘skater’ clothing with his Ghanian heritage (“not all of it worked, but I’m glad I did it,” he told NME), and in the absence of Black influences in the Australian public eye, he turned to those internationally, those that he likely shared with no-one else in his school - aside from his brother. “It was always Black weirdos,” he laughs. “André 3000, Erykah Badu, Solange, Prince; anyone who was Black and doing weird shit.”

It wasn’t the ‘weird shit’ they were doing that influenced Genesis so much as their self-expression, and the authenticity they emphasised through their art. “I wouldn’t be able to live with myself if I wasn’t being me. Having to comprise is like the fucking worst thing for me, it’s just very jarring.” So, Genesis didn’t comprise and instead fought to be himself - even if it meant experiencing the racism and bullying that came along with it. “Getting bullied is a way easier experience than letting myself down.” 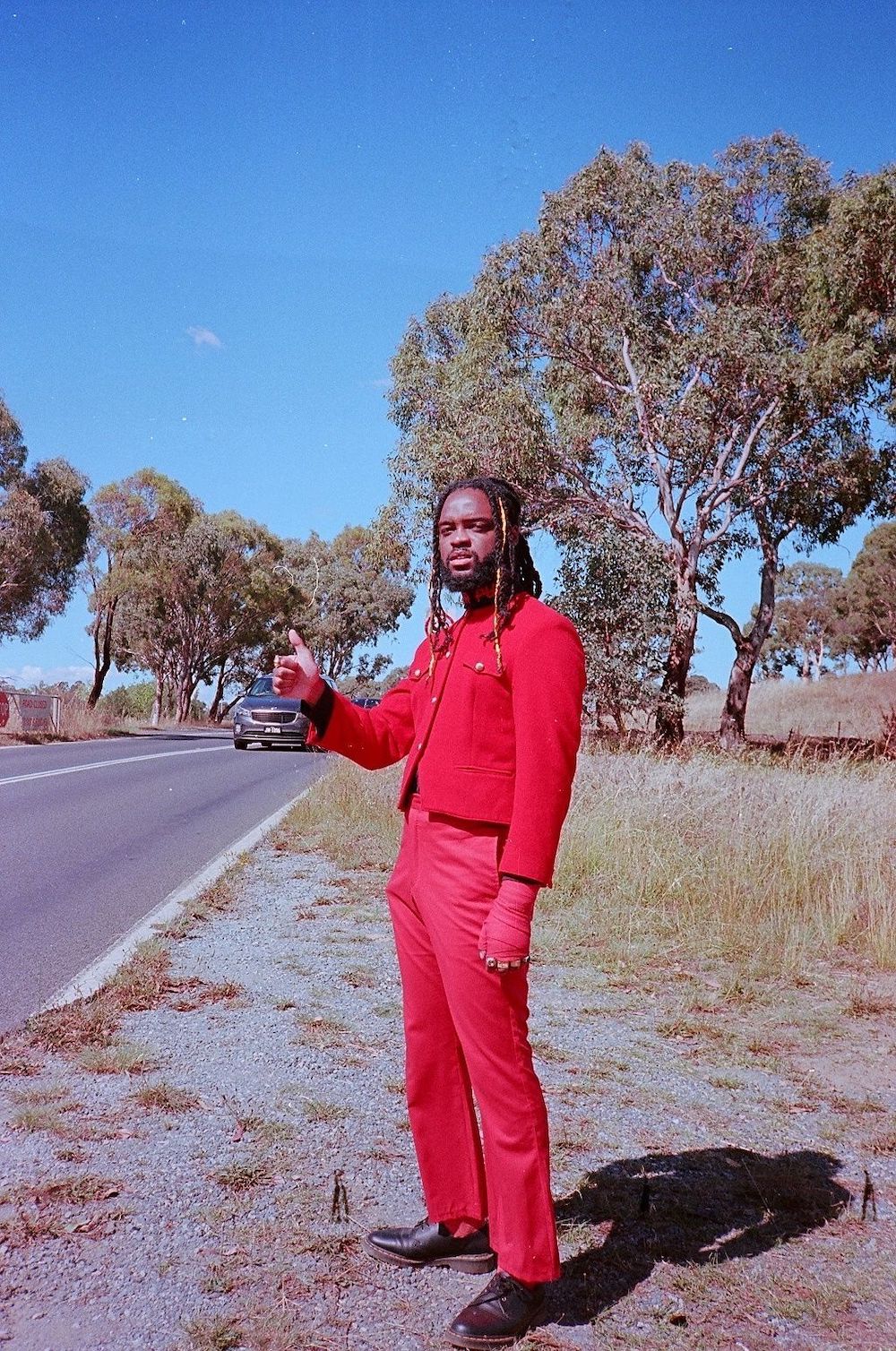 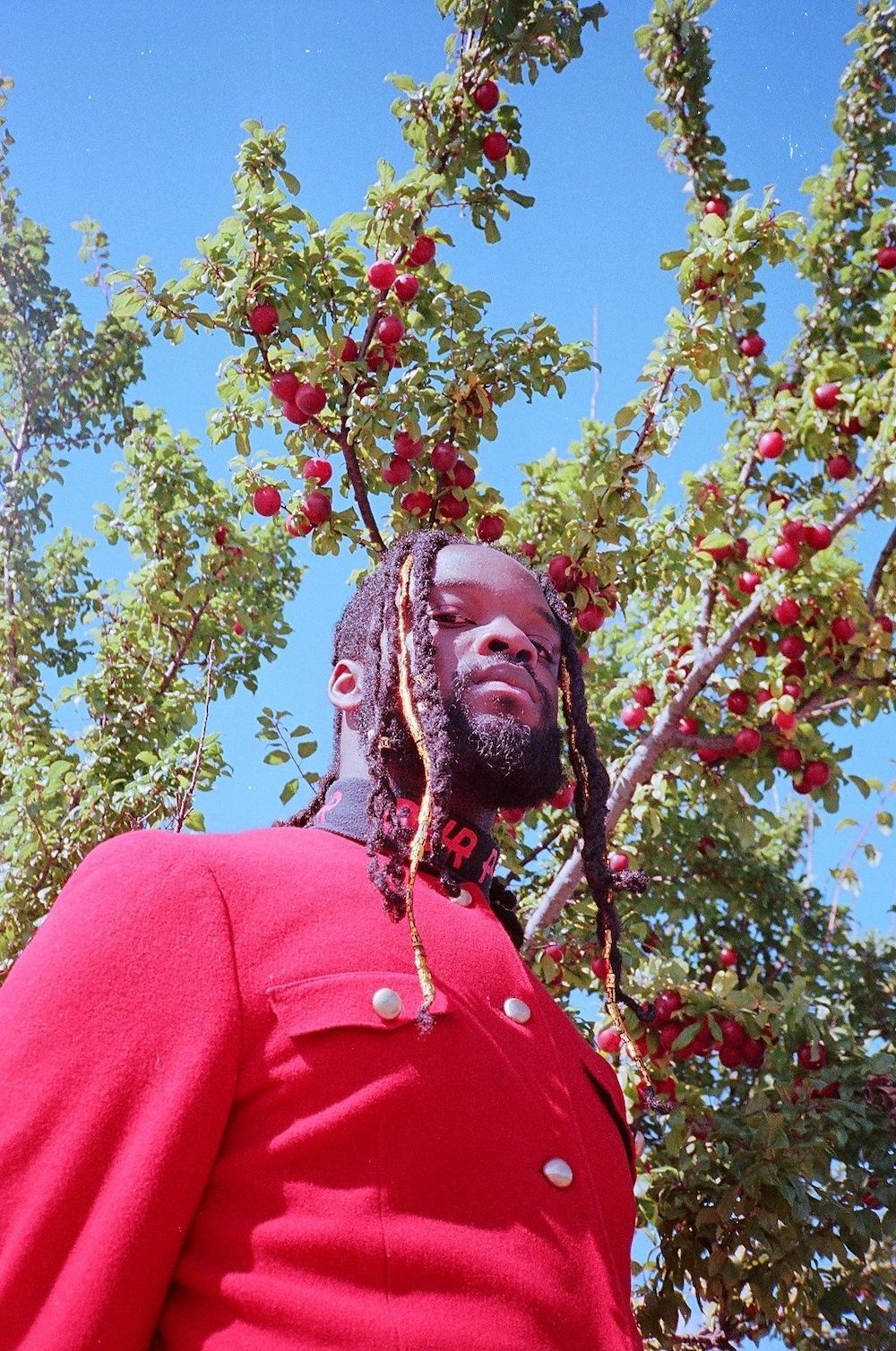 Smiling With No Teeth is an album with no comprise; an album where every minute is built by and focused on Kofi Owusu-Ansah, rather than the expectations people had in mind following his earlier rise. It beams with artistic expression, breaking down experiences and learnings central to the musician’s life through sounds that pedestal every word, journeying through the experimentation that thrives amongst the project. It’s an artist statement of Genesis Owusu; an album that is fueled by identity just as much as the albums that shaped Genesis Owusu and Smiling With No Teeth itself: Sampa The Great’s The Return, Solange’s A Seat At The Table and Kanye West’s pre-2018 material all examples of which.

It’s also a long shot from his earlier work, and the funk-branded singles that paved his explosive rise. As he explains, many of those singles - WUTD, Good Times, I Am - were written in the span of just a few weeks, and while they were fun listens that soundtracked his growing presence, they didn’t have much of a place in the greater vision Genesis Owusu was planning for an album-length project (a potential reason why they were left off the end tracklisting). “It was a slight compromise,” he says, one of the only compromises he’s made through the project. “It got to the point where if someone asked what Genesis Owusu sounded like, [I couldn’t] point to any of the songs and be 100% sure.”

Smiling With No Teeth is an album that rectifies that; an album that Genesis can point to when asked the same question and say “this is me.” Across the span of 15 tracks, he switches between eclectic sounds that range from experimental hip-hop to stripped-back indie-folk, enlisting an all-star cast of collaborators - Touch Sensitive founder Michael DiFrancesco on bass, Kirin J Callinan on guitar, World Champion’s Julian Sudek on drums, and manager / OURNESS label co-founder Andrew Klippel on keys - who worked together in tireless, day-long sessions to bring Genesis’ vision to life.

With a longer album format at play, Genesis - for the first time in his career - finally felt he had everything in-line to make his statement; to showcase his vision. “I needed a longer package [to make that statement],” he reaffirms. “This album was so liberating to me.”

Amongst its shifting soundscapes, Smiling With No Teeth is centred around the personification of ‘black dogs’, which represent intertwined, recurring themes within Owusu’s life. The first black dog comes from the othering - the exclusion - he’s experienced as someone of the Ghanian diaspora, working amongst an overtly white industry in an overtly white country. The second black dog represents the impacts this has on one’s psyche and identity; how years of racist exclusion and societal struggles have torn down his mental health.

The two black dogs move interchangeably amongst one another lyrically and metaphorically on Smiling With No Teeth. There’s a relationship between racial othering and mental health within Owusu’s own life - within the lives of anyone from the diaspora - that on Smiling With No Teeth, is shown in how the themes weave in and out of one another, often occupying the same space. Take Easy for example, a tale of failed relationships that disguise lyricism exploring colonisation - “She got a new guy with a suit and tie / Blonde hair, blue eyes / Hypnotised by coloniser advertise,” - or A Song About Fishing, a low-key album highlight that teaches about success when you’re so used to being torn down.

“I wanted to personify [the black dog concept] and make them into characters, because I felt it was slightly easier to represent the relationship between them,” he says. “I’ve been racially abused in the past, which doesn’t do wonders for mental health. That would then exacerbate the paranoia I would feel in white spaces, which would then lead to a cycle.” It’s a cycle he navigates through Smiling With No Teeth, as lyrics that may feel lighter charade darker connotations underneath. “I wanted to create the characters in a way where on the album, they’re interacting with one another, and showing that relationship.”

The ‘black dog’ theme plays a part in much of the album’s greater universe, in a testament to the vision and dedication to craft that Genesis Owusu holds - there really is no compromise. From the fashion styling down to the single artworks, the black dog idea has an imprint in every facet of Smiling With No Teeth, emphasising the importance Owusu holds in self-expression - and how she shows that throughout the record. “For the most part, this album is just like a therapy session. I spoke the truth about what was bothering me, for the sake of my own wellbeing.” 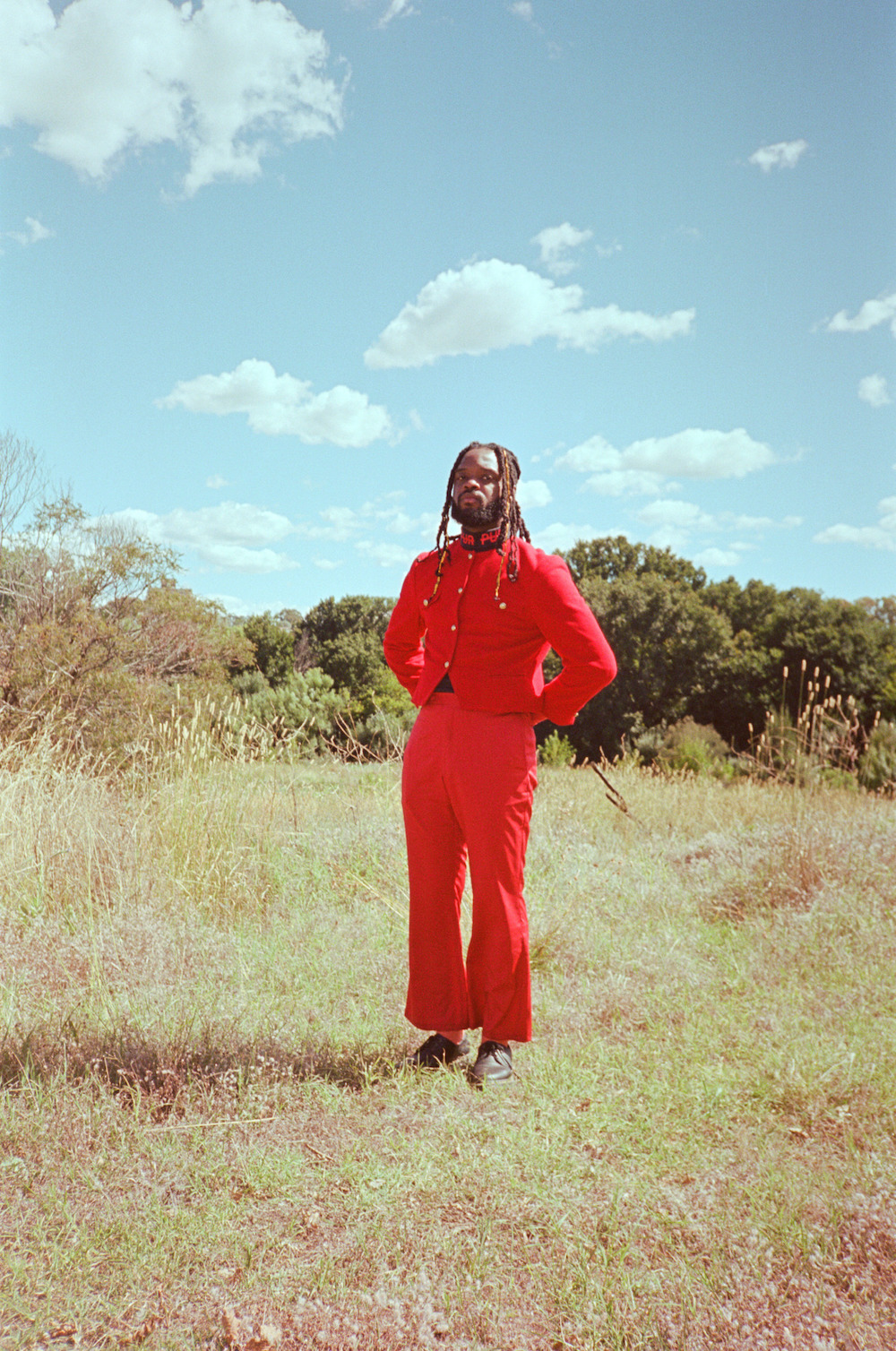 There’s a lot to take away from Smiling With No Teeth. On its own, the album is a driving exploration of not just Genesis Owusu’s experiences, but those that he shares with many from the African diaspora. It’s also an adventurous form of self-expression musically, veering between sounds and textures with a polished urgency that reflects upon the craft of Genesis Owusu and his live band, something that finally gets the opportunity to shine with a longer duration format.

For Genesis Owusu, Smiling With No Teeth also marks a chapter of evolution, with the album being a reassuring example of himself and his craft, and how he’s finally able to showcase that without being held down by the restrictions of stand-alone singles. It’s a proper, tall-standing introduction to Genesis Owusu at a level he hasn’t been able to show thus far; something that no doubt will be expanded upon as he continues to relish in the creative freedom and the levels of self-expression that brings.

For Genesis Owusu himself, it’s been nothing but a reassuring experience too. “I haven’t really learned new things [from writing the album], but rather have had things I knew reinforced,” he concludes. “Having the purity of my intention diluted during my early career, Smiling With No Teeth has really reinforced what I’m doing and why I’m doing it, and I wouldn’t want to do it any other way.”

Genesis Owusu's debut album Smiling With No Teeth is out now via OURNESS/House Anxiety. Catch him around the country on tour this Autumn, more information and limited remaining tickets here. 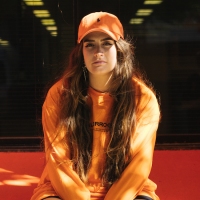 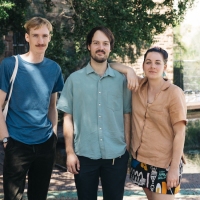 By Jasmine Cookson
Get To Know