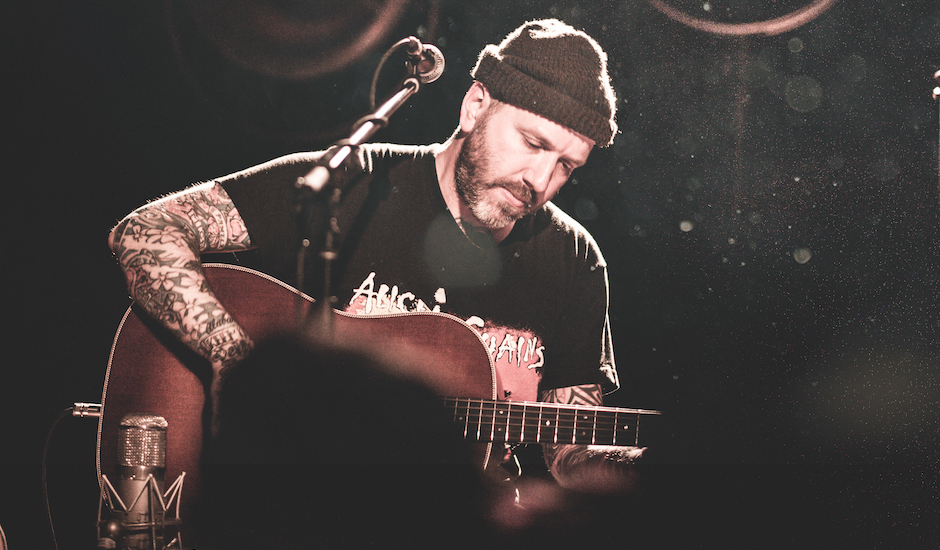 For any music aficionado, there’s always that one defining moment growing up where you see a live gig that changes everything. It could be the first time you stood in a bustling crowd, dripping with sweat and screaming along word-for-word with your idol, while you dodged a couple of strangers’ feet as they fly by. Maybe it was your first major pop concert that you begged your mum to take you to, and after months of campaigning, she finally did. For some others, it’s that indescribable feeling of being in a packed room, singing in unison and realising that one song that helped you also touched the lives of many others. It was the moment you felt that you were part of something much bigger than your average everyday existence. For Dallas Green, that “game-changing” experience was in August 1993.

“I was lucky enough to see Neil Young, with Pearl Jam and Soundgarden opening, when I was really young. My friend’s father took us. I was a grunge kid and didn’t really know much about Neil Young - I just knew that these guys that I loved worshipped him - but I was 12-13 years old and hadn’t really discovered it yet. [I remember] really just going like ‘wow.’ That stuck with me.”

It was from this moment of witnessing a line-up of rock’s greatest at Toronto’s Exhibition Centre that a young Dallas Green started penning original songs, some of which would end up on the first EP of his solo project City and Colour, some of which would never see the light of day. Flash forward a few years to 1997, where a 17-year-old Green saw Quicksand - a New York post-hardcore outfit from the 90s, who ignited that unstoppable desire to perform. “That was the real solidifier,” he passionately explained. “Seeing this band play really just made me want to be in a band. I’d been playing the guitar and trying to write my own songs at this point but seeing them [live] just made me want to do it.”

So he did. After a brief stint with three-piece Helicon Blue, Green co-created Alexisonfire – a heavy band that dominated everywhere from local stages in their home country of Canada, all the way through to Reading and Leeds, Warped Tour and Download Festival. Their success was largely grounded in captivating live performances that were described by NME as “superb,” “legendary,” and “always the scene of absolute carnage.” Many friends and musicians travelling around the same circuit, such as Cancer Bats, sung praises of the group and in 2011, when Alexisonfire announced their split, Dallas Green channelled that same passion for memorable live shows into a solo project he’d been dabbling with for a few years now.

City and Colour (Dallas Green – get it?) was an instant classic, weaving familiar folk melodies with a modern outlook on life, death, love and the overarching human experience. Songs Green had teased years earlier quickly became cult favourites – think Casey’s Song, Hello, I’m In Delaware and Comin’ Home - and Sometimes (2005), his first studio album under the moniker, reached certified Gold in Canada. Part of the project’s appeal was its organic approach to making and releasing music, avoiding the industry “machine” behind so many other artists. As Green explained, “I’ve been an independent artist my whole life. I’ve always loved that it seems to be more about the music than anything else, and it always seems to be the songs that find people, not the big machine shoving it in people’s faces.” Aside from humble releases, Dallas Green’s arresting performances played a significant part in spreading the good word of City and Colour. His soothing, crystal clear vocals, combined with an acute ability to reach into the deepest parts of your soul, have been addictive for over a decade and now lay the foundations for Green’s latest release Guide Me Back Home – a live album recorded over April and May 2017.

With 15 years of touring the globe under his belt, and most of his home country still untouched, it felt only natural that Green would embark on a 28-date tour across 25 Canadian cities, with material spanning across his entire discography. “I hadn’t really written any new songs and I’m not very good at taking a break,” Green admits down a crackly phone line. “For me, it was a bit of a selfish endeavour to begin with because I was a little bit lost in what I wanted to do. These shows were a way for me to keep moving and go see more of the country that I’m from and haven’t seen, and I hoped that people would come and listen for a couple of hours.” The tour was plainly described as ‘An Evening with City and Colour,’ highlighting the simplicity of the performances and avoiding any nod towards the fact they were all being recorded for this endeavour. While Guide Me Back Home started as a way for Green to travel and play music for the people who had stuck by him for so long, it ended up evolving into a celebration of the kinship Green shares with his fans and how together they had overcome hardship, through music and openly sharing their pain.

Guide Me Back Home is so much more than your average ‘best of’ album. Instead, it dives into the retrospective world of an artist’s career that spans across almost two decades, with humility rather than as blatant promotion. It sternly pushes Green’s artistic ability - in its most pure, stripped back form – to the forefront of the recordings, replicating the intimacy of how it would have felt to be one of 400 people sitting in a small venue in a small town in Canada, in a way that was “kind of like going to see a movie.” Aside from the expertly curated collection of new, old and rare material, the compilation excels in the little moments between songs of spontaneous chatter and audience reactions that not only highlight, but truly celebrate the power music has to connect and allow people to feel. “My songs are a pretty open book, it’s not like I’m hiding behind a lot, so I think the openness on stage is just an extension of that,” Green said. “If these people are comfortable enough with me to listen to these songs about whatever they might be about, they’ve already found out what I’m about. Plus, I have to kind of take the edge off, I’m usually singing about death or something like that, so part of me just wants to crack the joke to lighten the mood maybe!”

These “happy accidents” are scattered amongst the songs, replicating the overall flow and atmosphere the shows had. In one “truly Canadian moment,” Green dedicates his 2015 song Friends to (you guessed it) anyone who came to the show with their friends - and the magic happened. One man sitting up in the balcony yelled “I love you Phil” to which another man in the front row replied, “I love you Dave,” resulting in a warm crowd response of cheering and laughing. “They were friends and they went together but they didn’t sit together,” Green said as he retold the special moment. “That just happened organically, then I played the song and it happened to be a good version.” In other spontaneous moments, the singer casually chats about everything from being a bearded man wandering around the high school venue to his need to escape America after the dire election of Donald Trump as president.

All jokes and quirky anecdotes aside, Guide Me Back Home revives a world of ‘forgotten’ songs throughout City and Colour’s career. When asked if the intimate nature of the shows and the audience being physically so close affected his live presence, Dallas Green admitted “it breathed a new life into some of the older songs,” in a really positive way. “I played Casey’s Song from my first record, which I rarely play, well... I explain it on the record, but I just kind of forgot how to play it for a long time,” he laughed. “It was exciting to play these old songs that maybe I’d fallen out of love with or that didn’t feel the same as they did when I first wrote them, but these songs rejuvenated those feelings of love. That was a nice thing to take away.”

Guide Me Back Home pulls apart both the notable singles (The Girl, Sleeping Sickness) and hidden gems (Against The Grain, What Makes A Man?) of City and Colour’s discography. For fans, it’s a nice tribute to Green’s works from 2005 right up to the present day, and for first-time listeners, it’s a comprehensive introductory guide of arguably his best songs. The re-interpretation of certain songs in this live format keeps them from feeling stale or past their prime, but the messages that fans have held so close to their hearts for many years still ring true. “That’s my favourite part about it,” said Green on how intensely fans connect to his music. “I could write a song about my sister, for example, which is just plain as day about my sister and my relationship with her, and someone can listen to that and maybe it’s not their sister, maybe it’s their mum or their friend, and they take what they need from it. That’s the coolest part about music, you take what you need from it, whatever that may be for you.”

When looking back at his dynamic and surreal career, Dallas Green is still in awe of his success: “I’m still pretty surprised by the whole thing, even this many years later. I’ve always just wanted to make music and hope that someone, somewhere, relates to it and the fact I’ve been able to continue doing that has always been my measure of success.” From a series of influential 90s gigs to early beginnings finding his feet as a performer in the post-hardcore and screamo world of the early 2000s, Green’s musical life cycle has always centred around music as a way to connect – whether that be with yourself or anyone else around the world. Guide Me Back Home is a compilation that feels homely, warm and expressive in a way that only City and Colour could produce. It represents not only 20 tracks that literally represent City and Colour as a musical project, but also the wider picture of Dallas Green as a musician, an artist, and a fan himself. It showcases years spent admiring, creating and finessing the art of live performances that stem years back to the artist’s youth. And as for Dallas Green as a music lover, when asked about recent “game-changing” gigs that keep him inspired, the answer was easy: “Nick Cave and the Bad Seeds. Seeing him a few weeks ago was mindboggling.”

City and Colour's new album Guide Me Back Home is out now via Cooking Vinyl Australia. 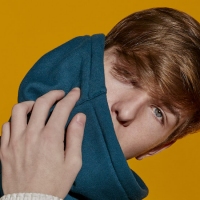 "It's been a really big two years." Inside Whethan's meteoric rise to the topTwo years since we first met, the now LA-based musician has become one of electronic's most exciting forces. 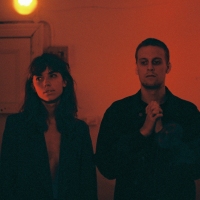 Inside The Magical World Of Two PeopleRising from the ashes of Snakadaktal, Two People marry intimacy and intricacy on their debut album, out January 18th.