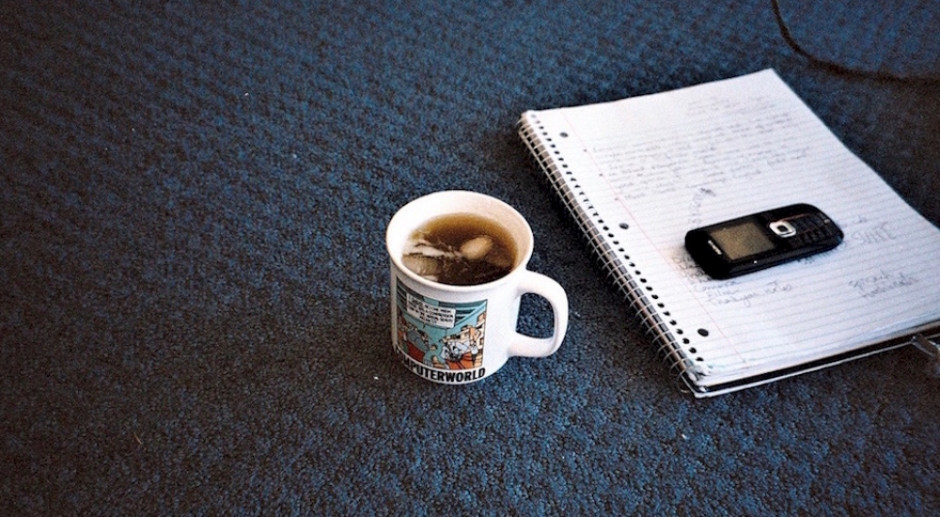 Being a freelance writer, I frequently swing between bouts of unstoppable productiveness and crippling depression at the lack of having a big boy job. Funnily enough, not that many prospective employers are interested in that time you spent half an hour talking about amateur wrestling with Billy Corgan. Easily the most soul-crushing part of being sometimes-employed is the regular excursions into the job market.

There’s no better way to make you feel useless than spending six months posting your CV thousands of times to hundreds of companies. “It’s okay,” everyone says, “You never get the first job you ask for. Just keep at it!” It becomes really difficult to not punch such fonts of ignorant positivity right in the neck, but subconsciously those little things are the boosts that keep you going. That is until you say, “Fuck it,” apply for an internship and try to work out how you’re going to live on the half-jar of peanut butter and box of stale macaroni in your cupboard for the next year. Either way, support like that is great, but it can never match the “fuck you” of the chain scam job offer email.

If you’re serious about finding work, you’ll post your CV to as many internet ports of call as possible. Your CV, if you’re doing it right, contains your contact details. This of course means that you’re exposing yourself to the internet like a homeless man exposing himself to a women’s beach volleyball competition. There’s no getting around it, either: if you want that job, you will do anything to get in contact with prospective employers. Those employers, however, make up about 0.000000005 per cent of the internet. The rest is made up of porn, obviously, and then people who want to steal your money, or use you in some elaborate shell game.

These days, with catchphrase and captcha technology, most email programs block out the obsequious ‘MAKE YOUR DICK BIGGER IN FOUR SECONDS’ emails, so most people now go for ‘1376314 MA4K UR D1K 81GG3R 1N 4 S3CS’ or something similar. But every now and again, you get an almost perfectly-constructed email that, apart for a few revealing details, could be authentic.

Take the email I received a little while back from one “Derrick Bensoon”, who’s name definitely sounds like that of a ‘70s wrestler. Since that name doesn’t come up anywhere else in a basic search, I assume it’s fake. My bullshit radar went off as soon as I saw the name I didn’t recognize but a chatty tone that made it seem like we’d been in contact before. Also, the proposed job was for a financial clerk, which I assume involves numbers and some form of organisation and is therefore way out of my skillset. 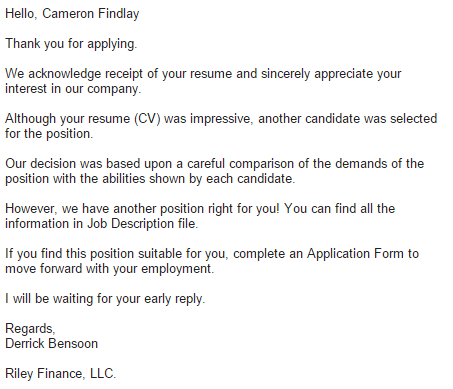 Following the email were two numbers: one for the US and Canada, and one for Australia and the EU. Curious, I called the Australian number, only to get a mysteriously far-away-sounding answering machine. After a few attempts at contact, it’s become clear that my new friend Derrick doesn’t want any contact with me. It might have something to do with the really passive-aggressive email I sent, but who knows. I’m pretty sure Derrick Bensoon is more robot than man. “Data on the internet” robot, not “time-travelling merciless killer” robot, just to be clear.

While the email itself, along with the attached “application form” and “job description” are all fancy and genuine-looking, the website for the alleged “company” that is offering to hire me is a different story:

How could you not trust sexy white people with names like Robert Smith or Victoria Taylor? Well, those are stock photos from a very popular web design program, and those links lead to nowhere. Fool me once, shame on me Derrick Monsoon. Fool me twice, shame on you.

But is this enough effort to catch out enough people to make scamming a worthwhile opportunity? How many people went, “Oh well, looks legit” before even thinking about right-clicking and selecting “search image on Google”?

According to the Australian Bureau of Statistics, online scams resulted in one billion dollars of financial losses in 2012. That’s a shitload of money going from excusably gullible and/or vulnerable people to those who need only a rudimentary knowledge of how to fuck people over. A few weeks ago, a con artist was jailed for five years for conning a few investors out of almost $200,000 of cash and credit cards. The cops busted him at the Crown Metropol, were he had been staying in a $6,500-a-night suite for more than a month. He succeeded by sending around four or five emails to “investors”. The mind-boggling ease of his win wasn’t lost on him: "He makes the observation that he didn't really have to say very much at all," says his lawyer.

That, if anything, proves how easy it is to con someone out of a lot of money over the internet. And it’s not just dumb people. Remember that college professor who raised $600,000 for what he said was SARS research, then gave it to Nigerian scammers? If there’s any amount of vulnerability or desperation in the target, there’s the chance for a windfall. And it’s an issue that Australian organisations of every level are worried about. The Feds even warn of being enticed into becoming a drug mule through online scams.

The level of effort that our friend Derrick “I’LL GET YOU, BATMAN” Bensoon has put into his email goes some way to explain that, even though we’re well aware of the existence of online scamming as a society, people are still falling for them. The above excerpt seems just like an actual employment referral letter, and the attached material seems pretty legit. The employment scam industry is obviously gaining a lot of fodder at the moment as well, with only bad news coming from the iron ore price and a drop in consumer confidence since the start of the year in Western Australia, as an example. This “transitional period” of industry causes a lot of nervousness and uncertainty in both industry and job seekers. And, just like Scientology and the proposed goon tax, these scams seem to only exist to prey on the needy and vulnerable.

Luckily, there is good news in the fact that these scams are widely reported, and there’s a lot of people out there trying to protect everyone from emails like the above. While the Chamber Of Commerce have better things to do than talk to someone complaining about how the only job offers they get are bullshit (i.e me), they do have a few useful links like the SCAMwatch website, and employment professionals like Alison Doyle regularly post helpful articles on knowing which prospective employers are real people and which ones are probably a server bank in a warehouse somewhere in rural China.

The point is probably that, with the ever-increasing sophistication of what can be done over the internet, it’s always important to remember that there will always be a select group trying to shill you. Being unemployed is a lonely and frustrating experience for anyone, but the tried-and-true avenues of job websites like SEEK and having a well-constructed LinkedIn account are still the best ways to go. In today’s transitioning employment market, only time and fortitude will get you to the other side, no matter how many robots tell you otherwise. 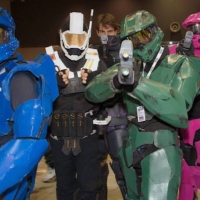 I Volunteered At WA's Biggest Nerd Convention...And it was awesome. 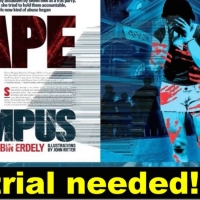 Rolling Stone's Rape On Campus Article & JournalismIn the age of online journalism, has something as simple as fact-checking gone out the window?