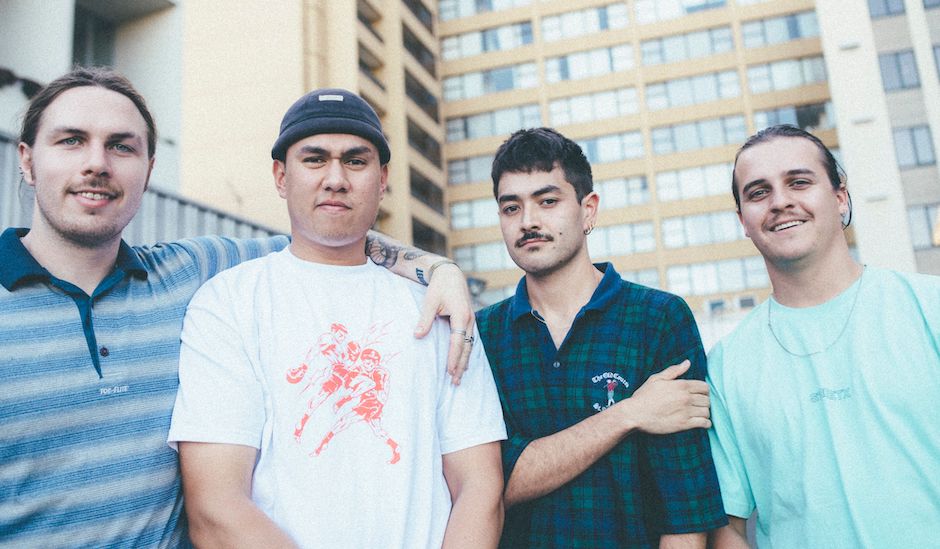 Off the back of their latest single Butter, the Sydney indie-rap trio embark on their biggest headline tour to date.

Pulling a crowd at a music festival anytime before 3 PM is notoriously difficult, let alone on a day tipped to peak at around 38 degrees. Specifically, we're talking about the first of two days of Falls Downtown - Falls Festival's two-day, west-coast edition which in 2019, arrived in Fremantle for the third consecutive year - and while the early-afternoon sets are largely crowdless (much of the festival's crowds elect to stand in the shading trees that flank the grounds' outer edges, rather than in front of the stages themselves), the blue-topped tent that sits in the middle of the festival's cramped, over-sensory setting is set to become its own world, packed full of an energy that you wouldn't see again until Dizzee Rascal, who plays the same stage seven hours later.

This world is soundtracked by Triple One, a Sydney-based 'indie-rap' crew composed of producer Billy Gunns, rappers Marty Bugatti and Obi Ill Terrors, and Lil Dijon, the "condiment that keeps us all stuck together and saucy" who you'd often find singing their sultry, R&B-leaning hooks. It's their first show in West Australia and after hours of crowds looking more tired, overheated and disinterested by the minute, the energy and strength of the hip-hop collective is a breath of fresh air, and if nothing else, the most promising sign thus far that Triple One are the future of Australian rap music, flipping the Australian rap culture and its unfairly-paired stereotypes on its head with every release, every show and every interview.

Moving away from Fremantle and Falls Festival, Triple One's success is one that's hard-earnt and self-made, building a cult-like audience that has followed their every step since their 2016 debut EP The Libertine. Drawn to their incomparable drive to do something different and unique in the Australian hip-hop circuit, their fans have proved themselves to be one of Australia's most dedicated – selling out east-coast headline shows in a matter of days and arming their latest single, Butter, with over a million streams in less than a month. Additionally (and somewhat uniquely for an act their size), they boast a strong international following too, something they aim to target with shows in the UK and Europe in May. Not to be a writer that borrows a phrase from a press release, but there's a line in there that really summarises Triple One best: "As Australian hip-hop edges closer to becoming a serious global force, Triple One stand firmly at the forefront of the movement."

It's a sentence that really encompasses the full appeal of Triple One and what makes them an exciting act pushing boundaries. Australian hip-hop is quickly blossoming into a unique, exciting force that with the backing of names like Apple Music's Zane Lowe, is branching out internationally; diverse names including Tkay Maidza, Manu Crooks and Kwame being some of the more dominant forces involved. Triple One isn't so much a group among these names – yet, anyway – but a group blooming and growing for much the same reasons – their raps are quick and paced; their hooks are sublime and sultry; their lyrical themes cover topics often left unexplored in music full-stop, let alone in hip-hop.

Butter, their latest single, offers the most evidence of this unstoppable combination thus far. It's a lively and seemingly light-hearted track that shines with that signature Triple One flair; Marty and Obi taking turns to glide above a slick production by Billy Gunns that unites clanging percussion with playful keys and glistening melodies, while Lil Dijon's aching, singalong-worthy hook adds an emotive touch that unmasks Butter's themes on mental health, signalling messages more meaningful and dark than the single's uplifting keys suggest. "It pretty much shows that you can talk about mental health in rap music and that you can talk, sing or rap about the thoughts deep down inside," explains Marty over the phone, before Dom (Lil Dijon) interjects to add more insight. "It's about embracing the chaos of everything and accepting that things happen for a reason. Eventually, everything gets better." 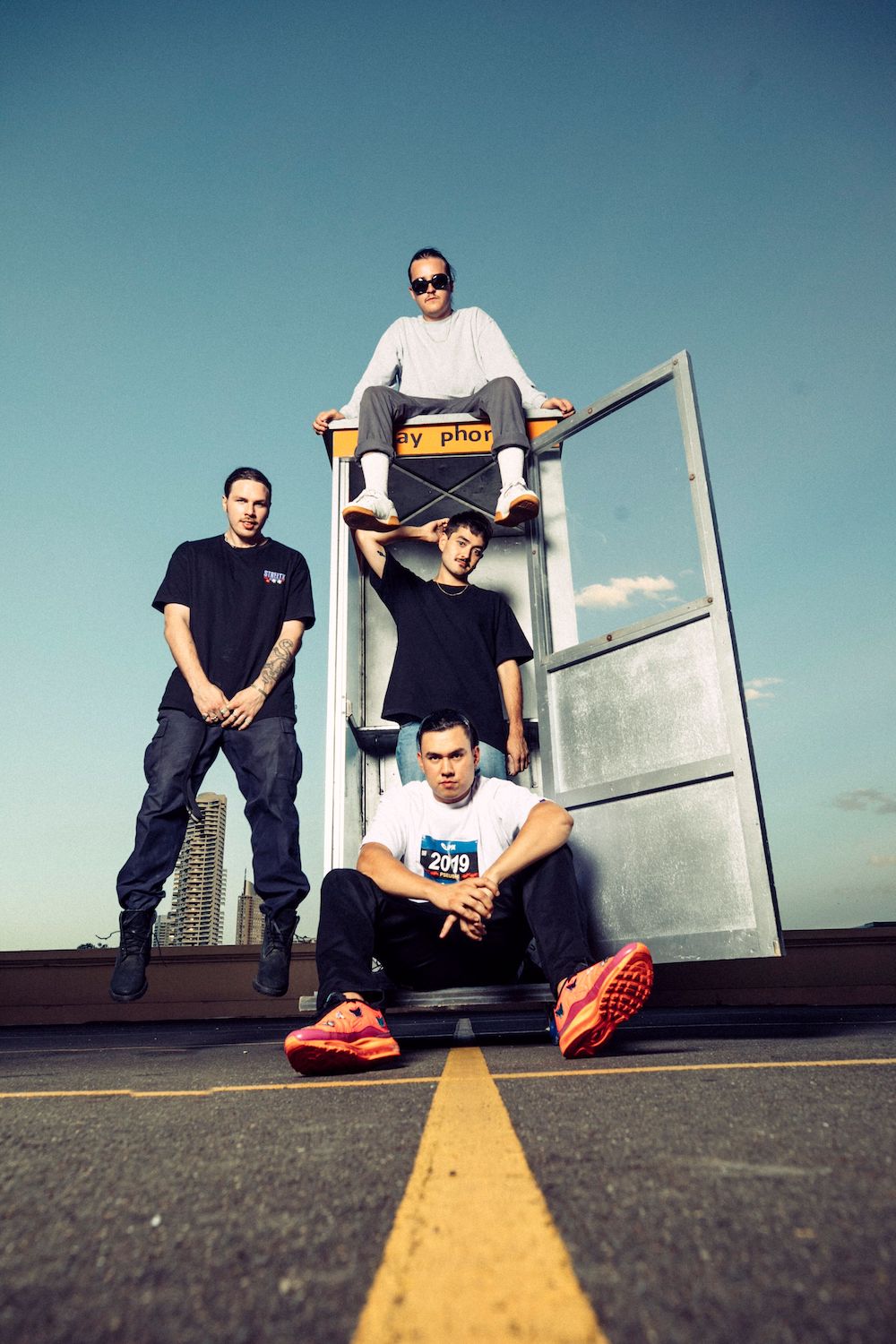 Despite talking on the phone some four thousand kilometres away, it's evident that Triple One's sound – and resulting success – is built off their close relationship with one another ("we're like a family at this point") and their ability to know each other's tastes, wants and needs with just head nods and facial expressions, often finishing each other's sentences and speaking passionately about their irreplaceable connection. It's something that allows them to be so open with each other and as a result, make music as important and meaningful as Butter. "It's very easy to express ourselves in front of each other and that non-judgemental environment we've created amongst ourselves lets us be so open – it's a very safe space to express yourself," Marty says before Dom chimes in. "We're a bit too open sometimes," he laughs.

The close, family-like relationship between Triple One's members is something that underlays everything they do, and even if it's not so clear-cut as a crew like BROCKHAMPTON – who they're often compared to – it's something evident in their sound and their growth over the last few years. The four-strong collective haven't had a lineup change since their initial release and a result, you can really feel how the group have grown alongside each other and evolved in the time since – whether it's Lil Dijon's capacity to move between hip-hop, R&B, pop and indie, or the ever-changing role of their in-house production Billy Gunns, who like BROCKHAMPTON's Romil Hemnani, Jabari Manwa, and Kiko Merley, are able to adapt to whatever sound and style the rest of the group want to attempt. "Everything is a collaborative effort and it always has been," Dom explains. "It's always worked incredibly well, even in the early days when Billy would be making a beat in his bedroom or garage in front of us, we'd already be writing along to it."

This seamless, collaborative approach to songwriting is something that's still present years later, remaining an essential part of the Triple One sound that has remained steady despite the group's ever-changing and genre-diverse music. "The way we make music is so organic," Marty continues, building off the scene Dom painted in his explanation of the group's early approach to songwriting. "By the time Billy's finished building the beat, we've pretty much finished the song. When you hear the beat and feel it being made, you can't help but just get inspired; you hear how the production comes together, so you feel more of a connection towards it and have more inspiration when it comes to writing. It's something that has never changed for us." 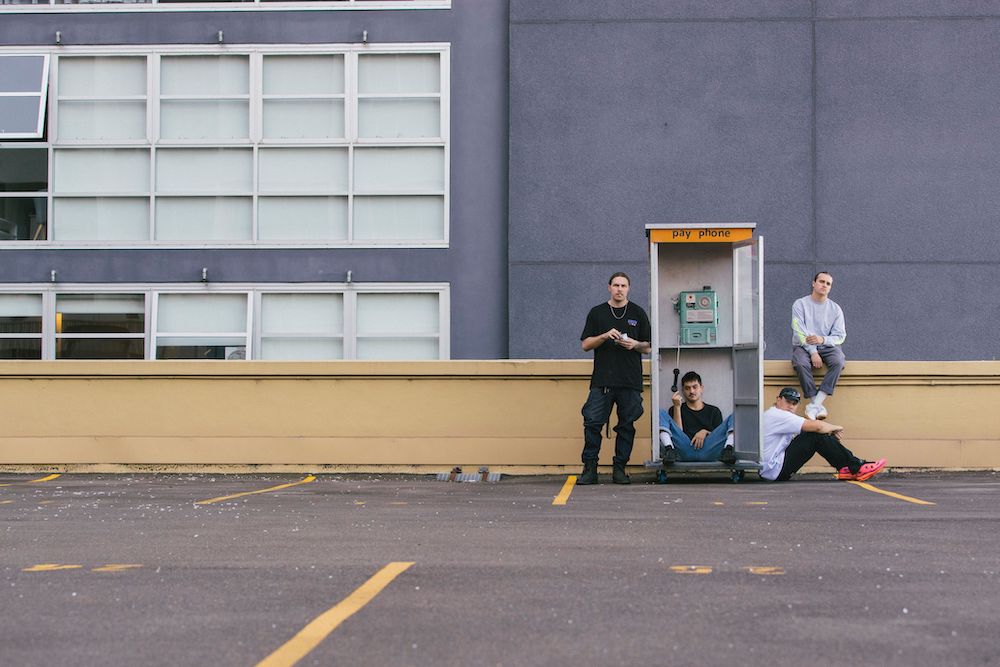 As Australia's rap scene grows and diversifies, there's more pressure to stand out and be a unique artist. Triple One are an act that cut through a somewhat saturated market naturally, aided by their ability to adapt to any sub-genre or style that approach; an outcome of their close-knit connection, aforementioned approach to songwriting, and their various, distinct backgrounds when it comes to music. Triple One are a group built on range and versatility, mixing their distinct, Australian hip-hop sound with shades of almost everything; indie, punk, pop, R&B and the list continues. At times, their music is impossible to categorise, defying genre norms as they incorporate influences in everything from the Sydney indie scene to Ludacris (who Marty admits was one of the first rappers he listened to, introduced by his sister), but none more-so than Sydney's somewhat notorious ‘gutter-rap’ – the underground, DIY-centric Sydney rap crews which today, heavily inspire Triple One's sound and how they work.

"It's a sound that's so uniquely Australian, and that's something we try to bring to Triple One," Marty explains, discussing how the underground, gutter rap crews he fell in love with in late-high school would eventually inspire his work with the group, specifically shouting out groups like including Sydney Serchaz as he continues. "I feel like as an artist from Australia and more specifically Sydney, I want to be inspired by the culture coming out of this country rather than those of other countries – even if I love what's happening there, which I often do. I'm really inspired by Australian rap music and that's important. I think it's really important to build our own identity as a scene in rap music, especially as such a young country to this world that doesn't have the same history as the US for example."

It's an interesting point at a time when Australian hip-hop is becoming only more internationally recognised, whether it be on festival lineups (The Kid LAROI. and Manu Crooks are represented on the Rolling Loud Miami billing – a hip-hop festival considered the world’s most prominent) or esteemed showcases, such as Kwame at Austin’s often-career-defying SXSW event. As a mainstream culture interacting with hip-hop, we’ve come a long way. No longer is Hilltop Hoods, Bliss n Eso or 360 considered the start and end of Australian rap music; instead, we’re a blossoming, diverse culture on the edge of a global burst. “In the next few years, we’ll see Australian hip-hop in an amazing place within the whole landscape,” said Zane Lowe – Apple Music’s Beats 1 director and one of the music industry’s most recognised and acclaimed tastemakers – in an interview back in November. “It’s opening up to the world at the moment and moving into bigger things,” mirrors Dom.

As for Triple One? Well, they’re going to be firmly cemented in this international rise, something already underway with international shows, global blog coverage and more under their belts already. As Australia’s hip-hop scene grows, expands and diversifies, Triple One will be leading the charge; their unique, distinctly Australian sound as present internationally as it is here. “The dream is to have a full international break,” says Marty, asked with where he sees Triple One heading in the next few months, the next twelve months, and then beyond that. “We want to be able to tour the U.S. and tour the world; just live the dream and just make music that we love and feel as true to ourselves,” he continues, before Dom laughs. “Just to be able to make a living off making music would be sick.” 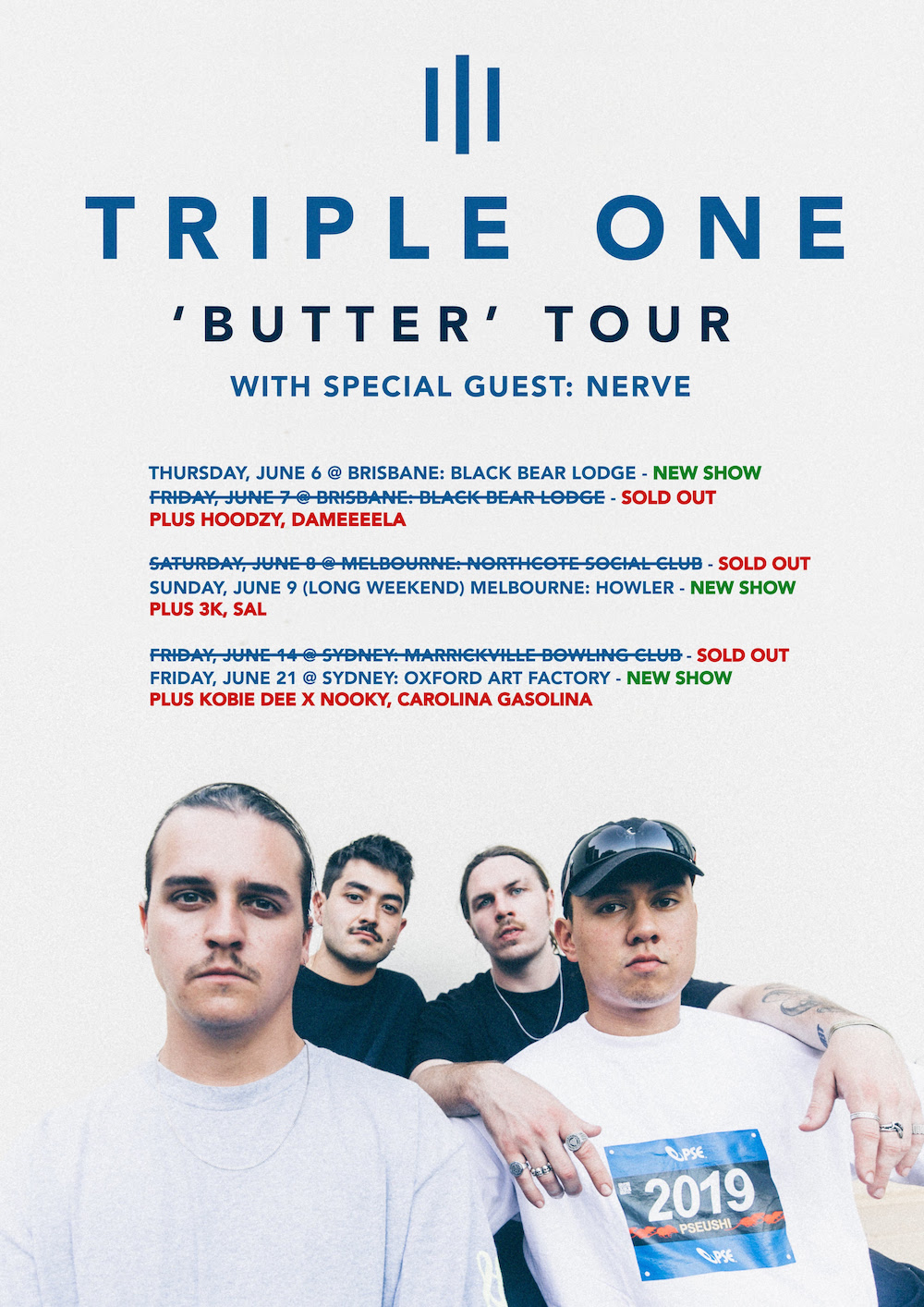 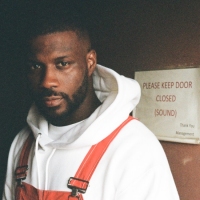 From Broken Bones to Black Panther: The Redemption of Jay RockIn the midst of his first Australian tour, we talk to the Californian rapper about Kendrick, winning a GRAMMY and his latest album. 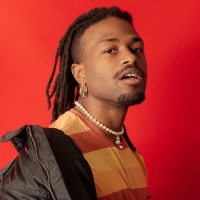 Falling Forward: In Conversation with DUCKWRTHThe LA-born hip-hop chameleon will be returning to Australia for Groovin The Moo and headline shows with MØ this April/May.

They've just released a stellar second album, but Jake Webb is already looking to the next one.