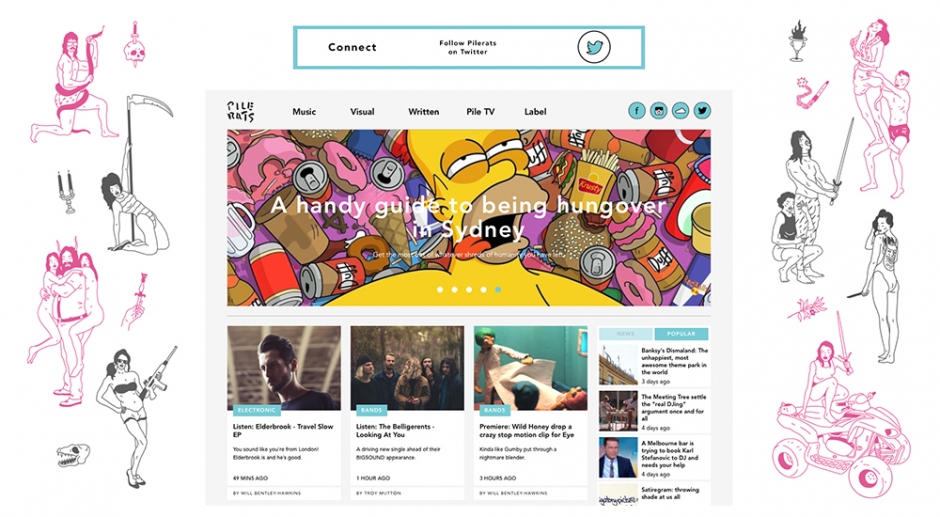 We look at our website all day, every single day and as some of you may have noticed there are blocks of real estate on the outer edges of the browser that are more often than not empty. We sometimes fill these with advertising so that we can keep eating, but we also see this as an opportunity and on a monthly basis have decided to give it over to the artists we love as a monthly feature to help help grow the networks and awareness of the creatives we love! We'll be having chats to the people we feature and if you are a regular visitor to Pilerats.com you will be seeing their visuals everytime you visit!

We thought that considering we had worked with Sean Morris on a number of things over the years and that we're massive fans of his work he was the perfect person to launch this new little initiative with!

So how are ya mate? Where are you? What are you doing? What have you been up to lately?

I'm real good dude! I'm actually in Bali at the moment, it's pretty sick. Spent a few days at a hotel up in the mountains and I'm down at the beach now hanging out at my mate Brad's place... working on some painting stuff for his art label East Editions as a collab with my girlfriend, Maddy Young. Been flat out lately with a bunch of illustration stuff, and coming back to Perth to paint Jack Rabbit Slim's so it's been awesome to chill out for a bit this week.

All sounds great man! I love that East Editions stuff! So how have you found life since moving yourself from Perth to Melbourne? What was the catalyst for that decision and how has it affected your work and life in general?

It's been rad. There wasn't any particular catalyst for the move over, it just felt like the right time - I love Perth but I've always wanted to live in Melbourne as well. I've been flat out since I've been there, I decided to put all my art energy into one place for a while and it feels like it's been worth it - I've put on three group exhibitions and done a couple of solo things in the last 18 months, and a lot of opportunities have come out of that. I also signed with an illustration agency in Melbourne (The Jacky Winter Group) - they're awesome people and they've been keeping me pretty busy.

All sounds like it was positive then man! Making the move east has always been something that has played on my mind but the urge has just never been stronger than the things that keep me here.. It really shits me when people hang shit on Perth like it's the city that is holding them back from doing the things that they want to do.. If you're not doing things that make you happy in Perth moving east won't be the thing that automatically fixes that... That's why I always respected yourself and the other Last Chance guys.. Before you all moved off with your respective careers you did things and made shit happen in the place you were, rather than whinging that there was nothing to do and dreaming and waiting for some magical existence in another place.. I'll jump into fight for Perth forever.

I'll keep up that fight forever too man! I'm super grateful to Perth for stuff like Last Chance - that wouldn't have been the same in another city. I think it's an awesome town for creative people. Maybe it just sucks if you're boring? It takes a lot more than just moving to Melbourne or London or Berlin to make yourself interesting or successful if you aren't already that way in Perth. The worst thing is ex-Perth people in Melbourne who are still bitching about it even though they've left. So dumb.

So on the Jacky Winter singing - how have you found working with an agency like that? What's the difference between the workflows, going from I would guess managing and quoting a job start to finish yourself to then having an agency helping the processes in a lot of areas? Does it just free up your time to focus mainly on the creative ends of the projects?

I'm pretty into the agency situation. After working on my own for about eight years, it's amazing having someone else involved to handle the money shit and filter out time wasters - and just generally to have my back. Jacky Winter only handle my Australian commercial jobs though, and the work comes in waves, so I'm still running a lot of stuff solo. The tricky part is the agency deadlines are always super tight, so I'm never sure how much to commit to exhibition projects - I often get into situations where an illustration offer comes through with a two-day turnaround, just when I have two days left to finish a bunch of paintings for a show. And doing shows is great, but it's not what pays my rent.

So I guess going back to the beginning of those eight years what was it that motivated you to want to be an illustrator and work in creative fields? What or who was it that made you want to originally pick up a pen and also what then motivated you to take it from something you did because you enjoyed it to something that was going to be a career?

I've never stopped drawing since I was a kid, it's always been what came most naturally to me - but it kinda took me a long time to realise that making a career out of illustration was even a possibility? Like when I was in school, or even at uni doing film and design, I had a very vague awareness of illustration but no idea that the avenues through which I now make most of money even existed. At about 22 work started to come my way from a few places, and the internet had really started changing everything, so I decided to really commit to it - and in the years since then I've discovered more and more of these different income streams related to drawing.... and it's by taking advantage of as many of them as possible that i'm able to make a living.

I'm stoked for you man, makes me happy to know that there is still opportunities out there for those who want to make a living out of their craft without having to sacrifice and bend what they do to fit a mould of sorts. Was there ever a low point for you where things weren't going your way and you were rethinking making this your career maybe just relegating it to an after hours pursuit?

Yeah for sure man! Plenty of times. Could still happen, who knows how long my luck will hold out haha.

Yeah I feel ya man, I think that feeling goes part and parcel with being in a creative profession of any sort, especially when you are relying on yourself and the things you do as your only source for income. So if you don't mind talking about the business side of what you do a little. What is your time and business mainly split between these days? Does most of your work come through editorial illustration? Murals? Selling products and prints? Are the gallery shows good for business or is it more for brand building and exposure?

It's a constantly changing mix of selling prints, murals, editorial illustration, advertising illustration, fashion stuff, skate stuff, live art gigs and private commissions. And I still put about 30% of my time into doing shows - I just do those 'cause I love that shit. I love the community element, and making art where it doesn't matter if it sells or if it meets anybody's needs except my own. I guess the business benefits to it are all about awareness...and showing people the sort of drawing that I really want to do.

Perfect! So what's next for you, what do you want to do that you haven't done yet? What are you up to for the rest of the year and what are your plans and goals long term as well?

Ah man there's so much I wanna try to do. Hopefully next year I'll be able to work on some animation and some giant walls. As far as this year, I'm curating a show in Melbourne opening on September 4 that I'm pretty excited about - with Melissa Grisancich, James McKenna, Nathan Brown, Georgia Hill and myself - and I'm working on a new zine at the moment - doing a launch for it in Sydney next month and then in LA shortly after that!

That sounds great. I've always thought animation would be a really cool step for you to take! Good luck with everything though man. Thanks for the skin and thanks for the chat! Any parting words, life advice etc for those reading?

No worries man - thanks for all the support! 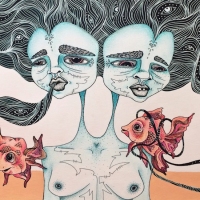 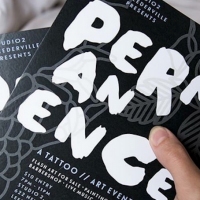 You’ve never seen an art show like this before.

We caught up with him while finishing up another beautiful under-the-sea-inspired piece.

Peek into the sketchbook of Californian artist Jay Howell.