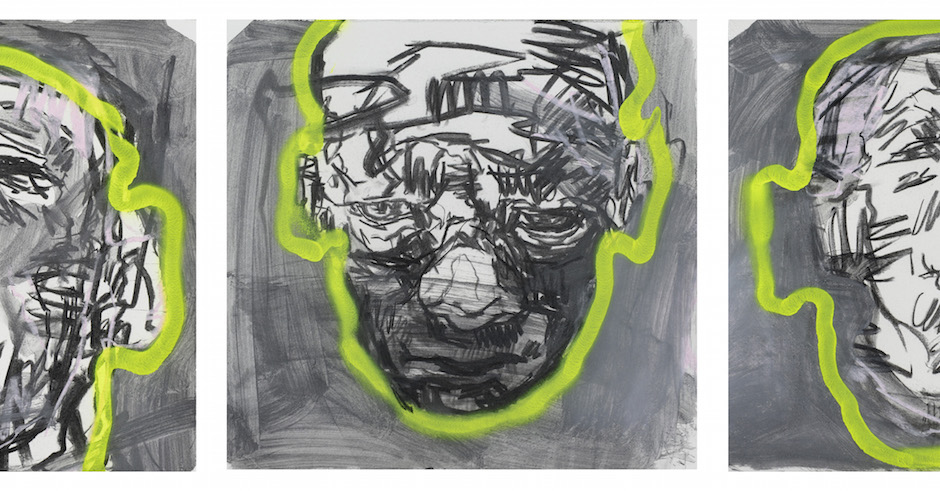 Red Bull Curates: The Canvas Cooler Project launched last year in the US, pairing up-and-coming artists with local venue owners across eight different major cities, the project asks artists to transform a Red Bull cooler into an inspired piece of art, to then exist in a shop space of Red Bull's choosing. You can check out some of those videos HERE before the project heads to Australia this month, inviting two Perth artists - Andy Quilty and Dipesh "Peche" Prasad - to apply their talents to Red Bull coolers in Uncle Joe's and Cabinet Noir respectively.

Today we'd like you to meet the first of those two, Andy Quilty, with the below interview interspersed with a few of his works:

Self portrait studies after getting bashed – triptych, 2015 (charcoal, graphite and aerosol on Arches paper)

I grew up in Rockingham, aside from a few stints living in the US and Canada I have always lived in Rocko. I love Rocko, all my mates I grew up with all still live here and for the most part I like the people down this way and the beaches, lifestyle etc. That said I'm glad to see the population diversifying down here, when I grew up I only had the one mate on my street who was of non-anglo descent whereas the street I live on now we have Indian, Malay, Indonesian, Somalian and Kiwi neighbours so it's good to know when I have kids their experience will be a little less vanilla and more culturally diverse than my own. 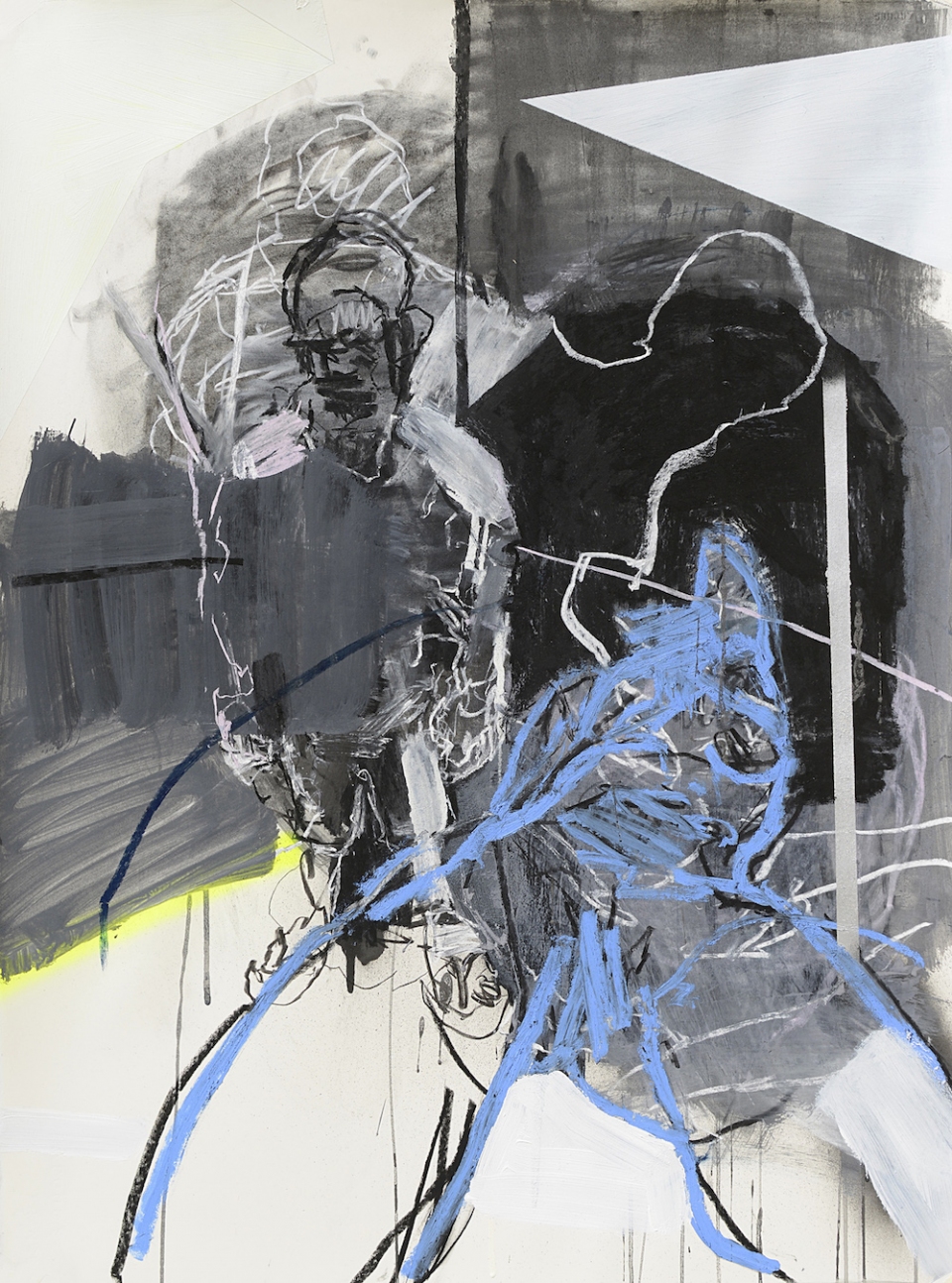 My studio, it's in one of the Industrial areas in Rocko, about a five minute drive from my house. My studio is in a block of industrial units, most are empty however there is a FIFO guy opposite me who works on his car in his unit on his swings off and there is a welder a few units down too. The unit directly next to mine is setup for mixed martial arts training so I sometimes hear them throwing each other into the (padded) walls. I just turn my stereo up to drown out all the various noise.

If the surf's decent I will get up and go for a surf first and then head in to my studio after that. I am usually in my studio until around 6 or 7pm depending on how successful my art making is on any given day. If there’s no surf I try and go for a run after my day in the studio just to burn of some energy and stress. 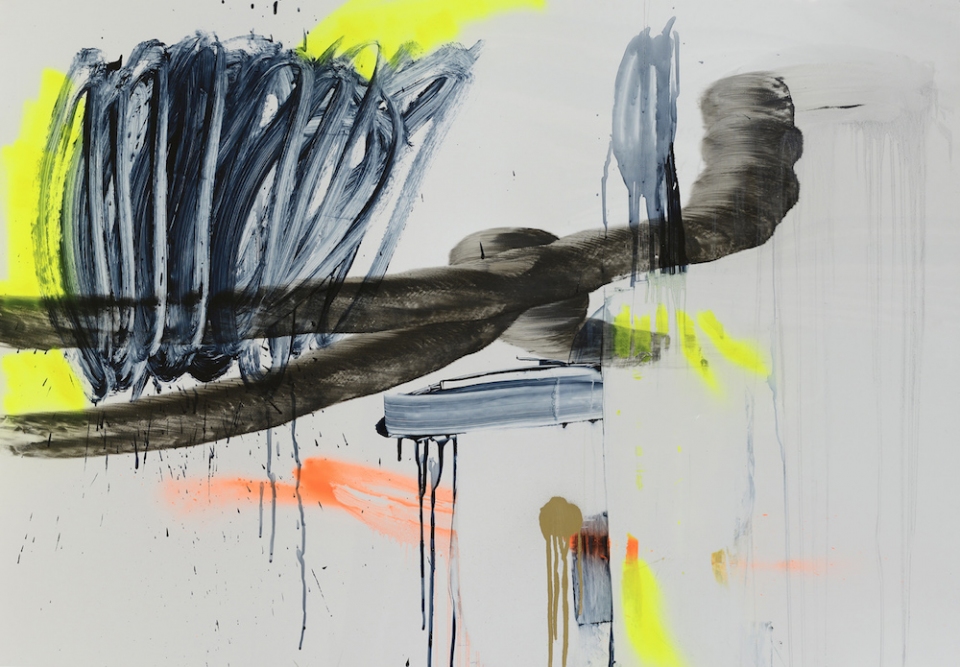 I use a mix of both traditional and more utilitarian mediums. So I’m using old school stuff like oils, combined with more suburban materials like auto enamel and spraypaint. I draw a lot in charcoal and also ballpoint pen. I have also done some paintings using just surfboard resin and often make work utilising motorbike and car burnouts as form of mark making.

Where do the ideas for your work come from? Is there a particular time or place in your life that seems to generate a lot of your ideas?

A lot of my work is influenced by my experiences from ages 17 to my late 20s working in surfboard factories and hanging out in Rocko, before I had any kind of art career or took life seriously in any real sense. The surfboard factories I worked in were pretty much female free zones which probably explains why my work deals mostly with ideas around hypermasculinity and suburban male culture (or lack of). 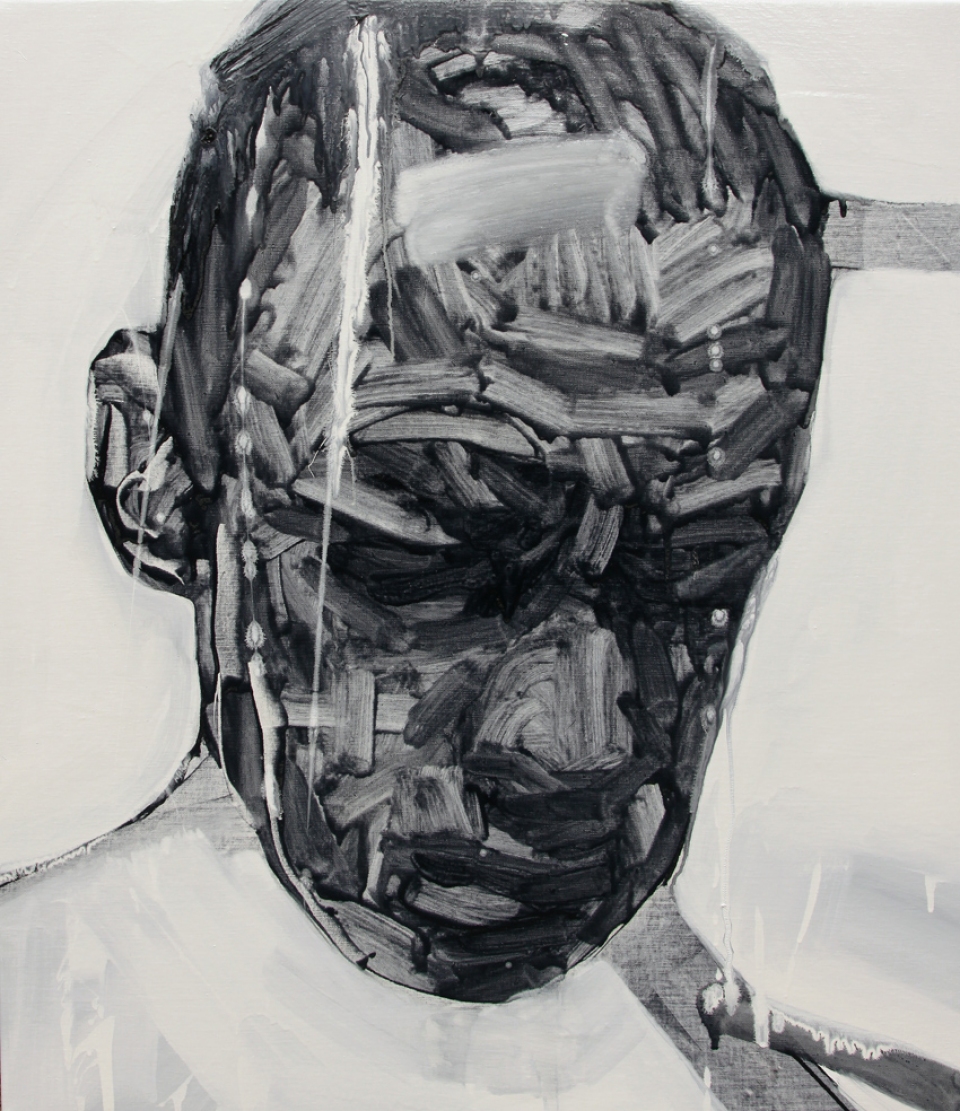 My immediate environment and sense of place and time within the suburban surrounds in which I exist is the biggest influence. Though in the past few years my world view has been greatly expanded through meeting my fiancé Eva who is of Indian heritage and migrated from Singapore to WA. Spending time with Eva and her family has been a valuable education for me in understanding the value of tradition and respect for cultural practices of others. This has led me to explore the suburban themes of my work in the context of our post colonial social environment in which there appears to be a real desire for some unique sense of belonging and form of tradition. Unfortunately this desire maifests itself in the cliché of Southern Cross tatts and ultra nationalism that seems to be trending quite prominently in the suburbs in which I grew up.

Do you read or have any favourite comics?

When I was a kid my mum gave me a subscription to MAD Magazine every Christmas for many years, but my interest in MAD was always more towards the drawings than the stories or jokes. I’ve never really got into comics as I am more of an outdoors person. 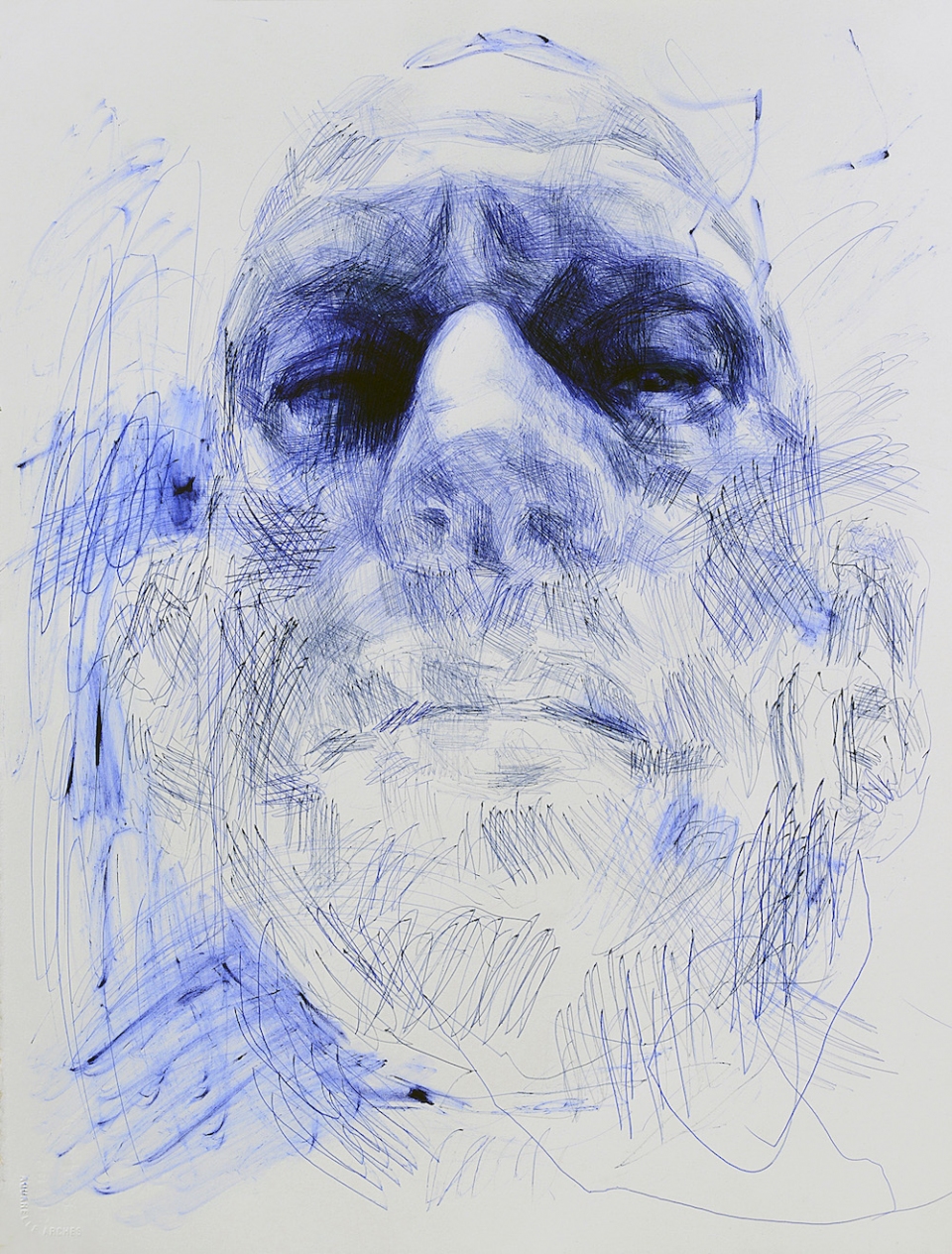 What have you been listening to lately? Is music something that is just playing constantly while you work?

In the last year or so I have become obsessed with podcasts to the point where I listen to them constantly and aside from when I am doing the actual act of painting or drawing I listen almost exclusively to podcasts. I mostly listen to movie podcasts like Film Junk and F-This Movie because I am a bit of a film nerd (this is kind of a secret only my partner knows). I also like Marc Marons WTF podcast and like most people was deep into Serial when it aired.

When I paint I definitely always have to work to music and this varies depending on the type of work I am making. A lot of the time I listen to heavier stuff like Metallica and Tool as it helps me work quickly and instinctively and stay alert, listening to more downbeat stuff can lead to making work that doesn’t have the same immediacy and punch. Recently I have been playing the album Sunbather by Deafhaven on high rotation when I work as it works awesomely in sync with the way I like to paint. That said I also play The War On Drugs almost on a daily basis since I discovered them a few years back, I fucking love them, so the heavy music while painting isn’t a hard and fast rule.

How to make a kickass Keralan Beef Curry, my partner taught me how to make it last week as she is pretty busy a lot of the time so I have to learn to fend for myself a little, currently my skills don’t extend much beyond pasta. 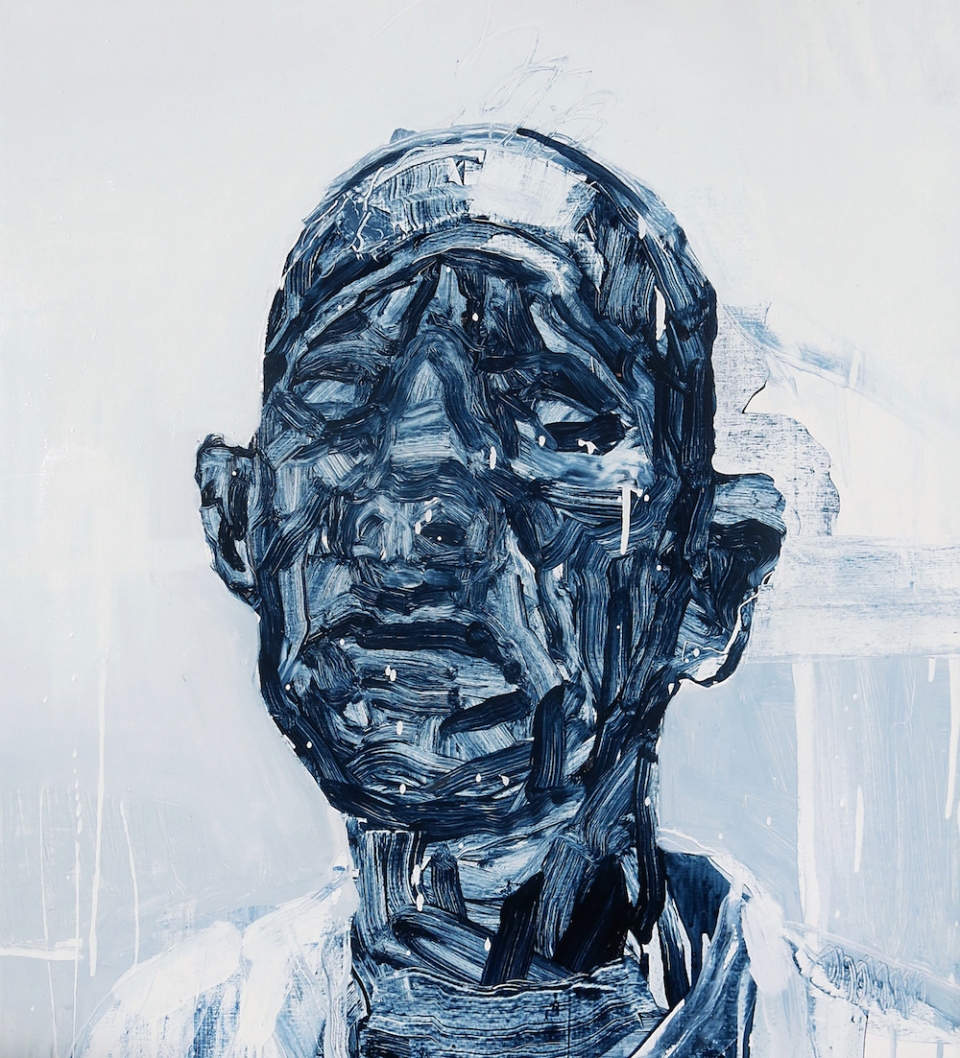 It’s pretty corny and perhaps a cliché but my parents always instilled in me the value of not placing importance on material things and just doing what makes me happy and trying to be a decent person rather than a greedy bastard or chasing fame. It sounds like pretty standard advice but being an artist for a living it certainly helps me to keep my priorities straight and ego in check.

Can you suggest three artists/illustrators/creatives we should check out?

Adam Cullen  - probably someone most people have heard of but he is my all time favourite Australian artist, his works never cease to blow me away. 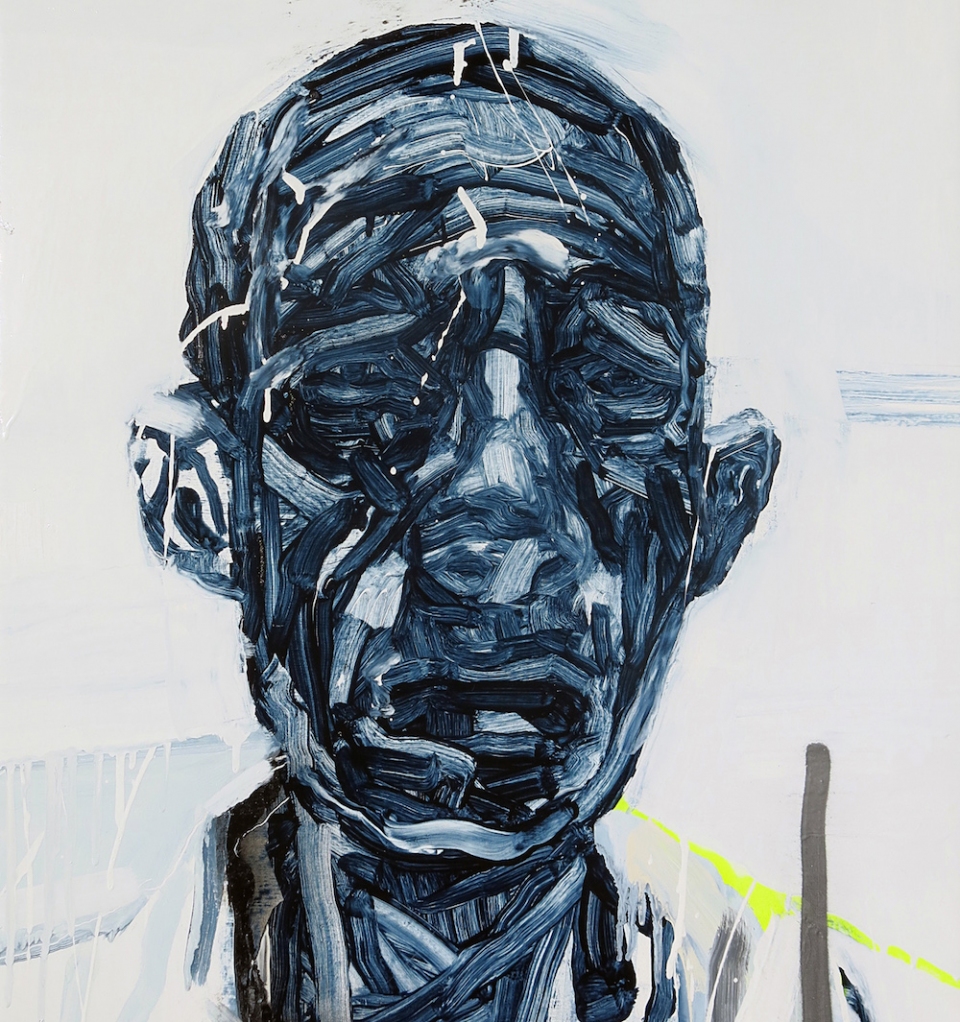 Who Would Win In A Fight Between My Dad And Your Dad?, 2015 (oil, enamel and aerosol on canvas)

Outside of this what do you like to do?

Surfing and snowboarding are easily my greatest obsessions, though I don’t get to snowboard nearly as much as I would like. My life pretty much revolves around surfing, though any real surfer worth their salt will give you that answer, it’s certainly not unique to me.

What are your favourite and the best things to do in the city that you live in?

Surfing and eating, surfing at my local and eating at either my mother in law's place (her food is phenomenal) or at some of Perth’s better Asian eateries, some favourites of mine being Bamboo in Willeton, and Good Fortune Roast Duck House and Uncle Billy's in Northbridge.

Thanks a lot for you time! Any last words/shout outs?

Just the usual, much love to my epic little Singaporean Eva, my fam, and my mates for relentlessly taking the piss out of me so that I never get too big for my boots! 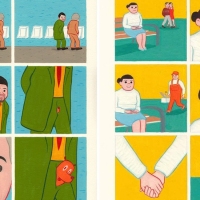 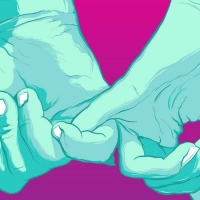 Step into the macabre world of illustrator Adrian Baxter.