British dude Dave Hockey has spent nearly 20,000 pounds on silicon sex dolls, which he keeps in his basement. Two years ago he met his wife, Shawna Bigelow, on a dating website – on their first date he took her down to the basement and showed her his collection of sex dolls. Shauna didn’t care. "I was interested because they are like large Barbie dolls. I was looking down their shirts and wanting to see everything and he (Dave) was looking at me like?” Right…

The two began dating and the dolls were welcomed into their love life instead of being left in the basement. As a gift Dave bought Shauna a male doll (Terry), with three different sizes of detachable penis, to join in the fun. According to the couple, the dolls have made their love life better than ever. The couple appeared on American TV network ITV’s morning show recently. Dave was keen to speak out in an attempt to reduce the “shame” around owning sex dolls. Said David to ITV: “The face of sex doll owners in the community is that of a lonely single guy. Because I made a documentary, I also did a lot of research on this issue, and there is a whole community that meet and talk about sex dolls with on forums. 30% of the people on our forum are actually couples and married.” What’s weirder than having five sex dolls in your basement? Spending all your time on the Internet talking about your sex life with plastic dolls, maybe.

Dave actually directed a documentary about high-end love dolls and the men and women who own them in 2013, entitled All Dolled Up (not to be mistaken with the actually good New York Dolls doco with the same title). The film doesn’t seem to have been released and we can’t really find any information beyond this trailer on Youtube, so we’re assuming it hasn’t made it way to Cannes yet and is still at the backyard stage. And the only people who’ve watched it are Dave and Shauna… and Terry.

If you thought one of the dolls looked familiar, why yes, that’s the doll Bianca that was used in Ryan Gosling film Lars & The Real Girl, acquired by Dave through his film industry connections no doubt.  Things have clearly gone downhill for Bianca’s career since she was bedding Ryan for money. 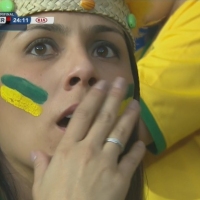 The Internet vs Brazil vs GermanyGermany's destruction of Brazil has offered many LOLs. 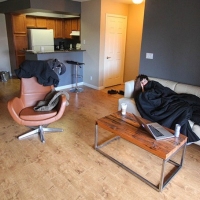